EART, held annually since 2014, again ran parallel to Frisian Flag. It is a European Defence Agency initiative organised by the Eindhoven-based, seven-nation European Air Transport Command (EATC) in cooperation with the Royal Netherlands Air Force. The exercise is one of the results of the acknowledgement by EDA that there is an airto- air refuelling (AAR) capability gap and lack of interoperability in Europe.

The KC-767A arrived on the third day of the exercise and the French and Dutch tankers particularly suffered from technical problems, resulting in limited availability. The tankers participating in EART represent the different refuelling systems and combinations in use today: boom only (KDC-10), hose-and-drogue pods only (A310 MRTT) or a combination of both (C-135FR and KC-767A).

Colonel Andrea Massucci, the Italian senior national representative with the EATC and exercise director for EART 2017, said: “EART offers a unique opportunity to plan and execute missions within the multinational framework of exercise Frisian Flag; but we also focus on quick turnarounds of the tankers, because during recent AAR operations – including those in the Middle East – we noticed that this is a shortfall. So specific training for logistic personnel is also part of this exercise. The complexity of the training we offer increases every day, starting from single-ship missions and evolving to being part of COMAO [composite air operations] within exercise Frisian Flag. Also noteworthy is that EART is pursuing the triple approach concept of academics, briefing and execution/debrief. Finally, we have mentors – experienced pilots and boom operators – on board the participating tankers. These can also be mentors from other NATO nations than the ones that are flying in EART or represented in EATC.”

Major Martin, a Dutch KDC-10 pilot with 334 Squadron and project officer for EART 2017, said: “During EART, the tankers flew in dedicated AAR tracks at the edges of the Frisian Flag exercise area. These are ESSO, located north of the exercise area off the Danish west coast, and SHELL, west of the Dutch isles. There we can operate between flight levels 150 and 300 [15,000-30,000ft/4,572-9,144m]. Apart from the tanker operations in support of Frisian Flag – including aspects like HVAA defence and attack – we also practise tanker cell operations, tanker-to-tanker rendezvous procedures and formation flying.”

An additional mission type practised for the first time during EART 2017 was a search and rescue/personnel recovery (SAR/PR) scenario. A simulated bail-out over water resulted in a SAR/PR mission coordinated by the Royal Netherlands Air Force’s Air Operations Control Station in Nieuw Milligen and the Dutch Coastguard Centre in Den Helder. In this scenario, practised on March 31, one of the tankers acted as on-scene commander. Although the C-135FR was initially tasked for this role, the KDC-10 took over, because the French tanker had to cancel due to a technical issue.

All players involved actually participated, including a ‘pilot’ fioating in the sea and an NH90 NFH helicopter of the Defence Helicopter Command’s 860 Squadron coming to his rescue. Related aspects like rescue, recovery and communication procedures were also practised during this part of the exercise, which was regarded as a success. 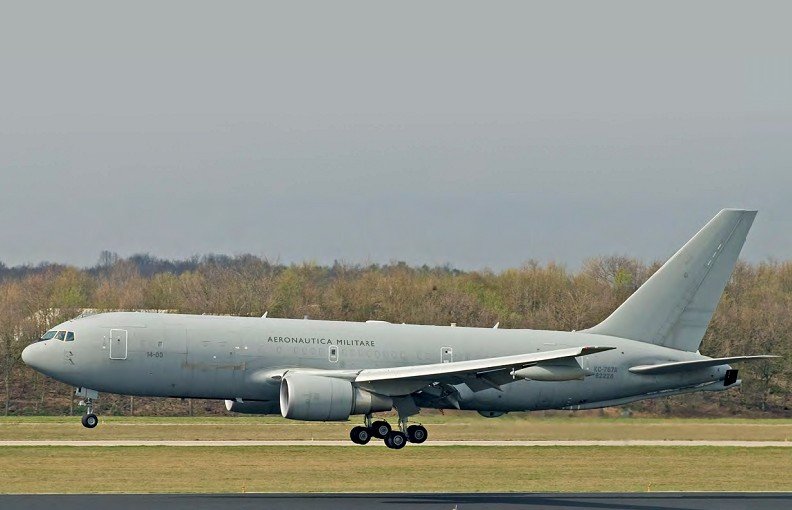 Aeronautica Militare KC-767A MM62228/14-03 lands at Eindhoven at the end of an afternoon mission in support of Frisian Flag.