In 2016, Airbus Defence and Space delivered 18 A400M transport aircraft to customers from the European partner nations and Malaysia. This represents about half of the total fleet in service, and despite recent technical setbacks production is now ramping up quickly.

As well as the production ramp-up, additional capabilities are being rolled out to the global fleet as testing and certification processes are completed. This is evidenced by hardware and software retrofit activities that are expanding the A400M’s capabilities from the strategic transport role, as initially delivered, into the tactical arena.

With 22 aircraft on order, the Royal Air Force is at the forefront of this role expansion and is adopting the new capabilities as soon as they are signed off by the manufacturer and European airworthiness authorities.

The RAF now has several Atlas C1 aircraft retrofitted to what it terms theatre-entry standard, which apart from the software upgrades are capable of being fitted with cockpit armour, a fuel tank inerting system and the bespoke UK self-protection suite, as well as suitably qualified crews.

One such aircraft is ZM401 (MSN 016), which recently completed a round-the-world trip that included appearances at the Royal New Zealand Air Force’s 80th Anniversary Air Show at Ohakea and the Australian International Air Show at Avalon, south of Melbourne held between February 28 and March 5.

The aircraft was on static display during the three trade days of Avalon 2017. During the show, AIR International spoke to Wing Commander Simon Boyle, officer Commanding, No.70 Squadron, about the RAF’s experiences with the Atlas to date.

While acknowledging the A400M has had a challenging entry into service, Wg Cdr Boyle spoke of the aircraft’s strengths in the strategic roles and the potential it is now beginning to show in the tactical environment.

No.70 Squadron is based at RAF Brize Norton in Oxfordshire, where 14 A400M aircraft had been delivered by early March. The remaining are scheduled to arrive from the production line in Seville in the 2018-2019 timeframe.

Of the aircraft already delivered so far, between 10 and 12 are actually at Brize; the others are cycling through a retrofit programme as capability increasingly moves into the tactical arena, as Wg Cdr Boyle explained: “The set-up at RAF Brize Norton is well geared for what the A400M requires. Besides 70 Squadron, we have a flight of instructors from 24 Squadron, our air mobility operational conversion unit and they carry out all training for the A400M, C-130J Hercules and maintenance training for the C-17A.

“We also have a state of the art training facility [with] two Level D simulators, a cargo hold trainer, loadmaster workstation trainers and some very clever engineering trainers as well. It’s a bespoke training system for the A400M, with the emphasis very much on synthetic training, and we’re developing the systems in conjunction with our industry partners as we move forward.”

The initial Atlas crews came from a mixture of backgrounds, from both the strategic air transport world of the C-17A and the tactical Hercules squadrons, to ensure a mixture of experience is available to 70 Squadron as the A400’s capability is developed in RAF service. A typical crew consists of two pilots on the flight deck and a loadmaster in the cargo bay.

A dedicated maintenance, logistics and support facility is also being constructed at Brize, complete with a three-bay hangar that will also be capable of taking C-17A and Voyager aircraft if required. The facility is nearing completion and will be in service during the second half of this year.

Maintenance of the Atlas is a joint effort between the RAF and industry. Engineers assigned to 70 Squadron are actually embedded within the maintenance organisation run by Airbus Defence and Space, but under the overall control of the RAF.

Also operating the A400M at Brize Norton are a group of flight test and evaluation pilots from No.206(R) Squadron. Wg Cdr Boyle said that rather than sending an A400M away to be tested and evaluated by RAF test pilots elsewhere: “We’re all learning at the same rate and we have a programme, such that Airbus Defence and Space incrementally releases tactical capability to us. In terms of the aircraft itself, from a UK perspective, we have just over 5,000 hours on the fleet now and, with the increasing size of the available fleet and with the efforts to accelerate the training of our crews, we’re hoping to increase the flying rate even further.” 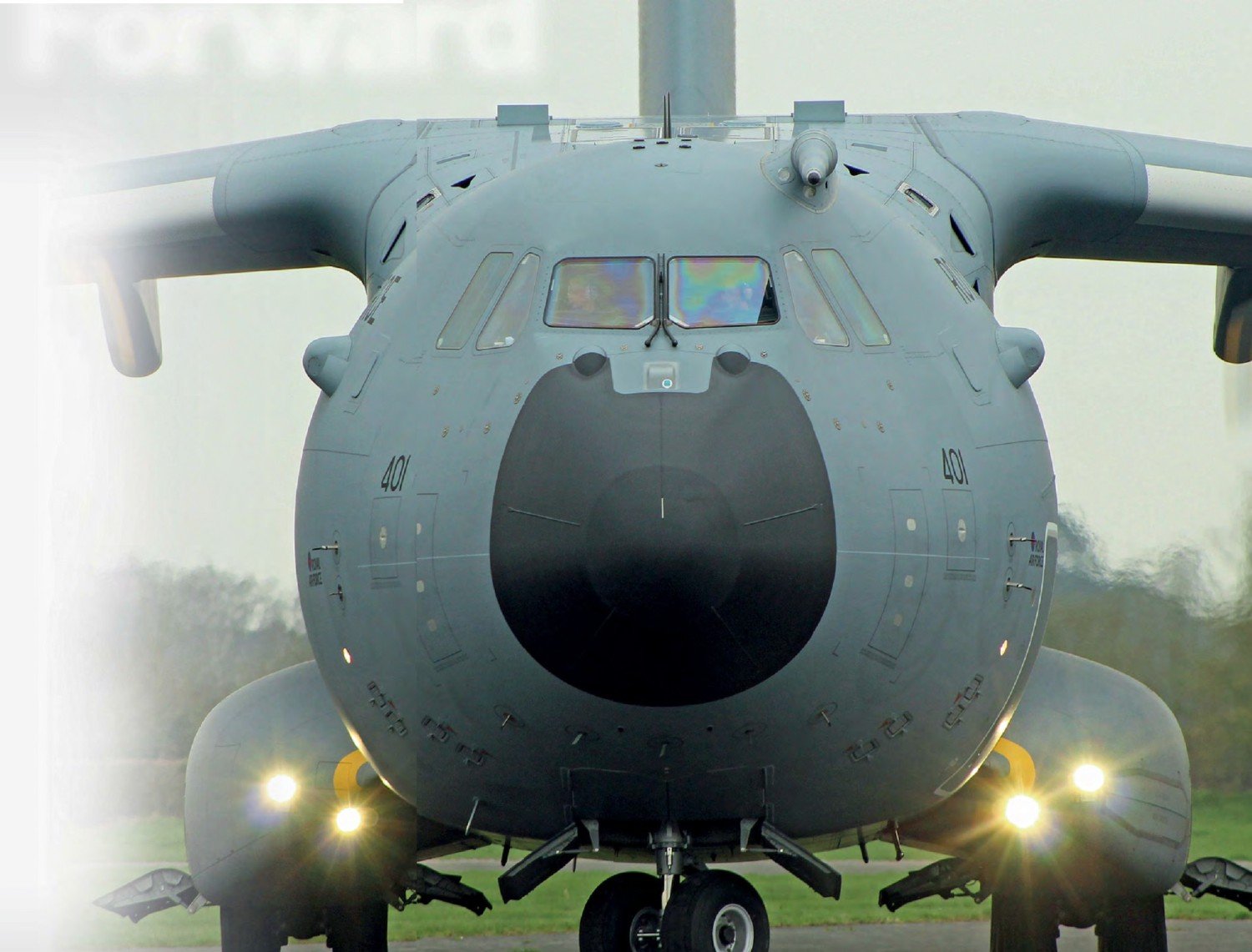 As the tactical capability is incrementally introduced, Wg Cdr Boyle said the relationship between the RAF and industry is very important and the service is looking in on the test and evaluation activity conducted by Airbus Defence and Space, as it looks to expanding operations into unprepared runways, air-dropping medium-weight stores, paratroop drops and the like. We’re already beginning to understand how the aircraft could be capable of performing, if the company [Airbus Defence and Space] continues to place effort into progressing those elements.”

With the RAF now beyond initial operational capability declaration in the strategic role, the Atlas is becoming a regular sight at airflelds around the world.

The mission that brought ZM401 to Avalon, for example, initially routed across the Atlantic to North America, where around 17 tonnes of cargo was delivered to a number of locations in the continental United States, before continuing across the Pacific to Hawaii and Fiji and then heading further south to New Zealand.

During its stay in New Zealand, the aircraft was demonstrated to the Royal New Zealand Air Force and local media before crossing the Tasman to Australia, via the air show at Ohakea. After Avalon, it flew across Australia to Perth, before routing through Indonesia, where its capabilities were shown to the Tentara Nasional Indonesia – Angkatan Udara (Indonesian Air Force), and other stops in south-east Asia, the Middle East and Europe, before finally returning home to Brize Norton.

Wg Cdr Boyle said the intention of the trip was to stretch the aircraft’s legs and to develop and validate use of the A400M as an RAF strategic air transport platform. The world tour also allowed the RAF to support the Royal New Zealand Air Force in its 80th anniversary celebrations and the longstanding relationships with both the RNZAF and Royal Australian Air Force.

Wg Cdr Boyle was rightfully upbeat about the world tour: “If ever there was a demonstration that, in spite of the challenges we have experienced, the aircraft has global reach, then this is it. This is the furthest south we’ve deployed the A400M. We have flown over 13,000 nautical miles [24,000km] so far and, by dint of the fact we’re on the other side of the globe, I’m hoping we get another 13,000 miles out of the journey as well.”

The aircraft is around 20% faster than a C-130J and although book figures published by Airbus suggest a cruising speed of Mach 0.72, Wg Cdr Boyle says the RAF uses a slightly lower speed of Mach 0.68, which offers the best payload/range compromise. He said: “On the C-17A, we used to routinely cruise at Mach 0.76, but for a turboprop the A400M really has an impressive performance as a strategic platform, so we’re getting all those advantages over a strategic range.”

Similarly, Airbus offers a service ceiling of 40,000ft (12,192m), but because of RAF regulations concerning cabin altitude Wg Cdr Boyle says the RAF does not tend to operate the aircraft above 37,000ft (11,277m): “It will operate quite comfortably up in those regimes and we are routinely operating at those kinds of levels.”

RAF operations thus far have reportedly validated figures that suggest the aircraft can comfortably take a 20-tonne payload, which is comparable to a C-130J, almost twice the distance and at a faster speed. However, the RAF purchased the A400M as a tactical transport and Wg Cdr Boyle does not hide the frustration at the delays in realising this capability: “Entry into service of any technologically advanced, complex platform is a challenge and it would be disingenuous of me to try to pretend the A400M hasn’t been difficult: it has; and 2016 was a challenging year.

“But I genuinely believe we’re moving beyond that now, both in terms of the core principles of how we operate the aircraft, and in terms of the way we’re moving forward with the tactical employment capabilities of the platform. We want to be rolling out its tactical capability and take advantage of the A400M’s range, speed and payload to do the job we need to do.”

The 70 Squadron boss says the RAF is now beginning to understand how effective the A400M will be in the tactical role, given continued investment of effort by the manufacturer: “We routinely fly the aircraft at low level and it’s performing very well. We’ve had it down in the valleys of Wales and the test and evaluation team are very impressed by what they’ve seen in terms of aircraft performance.”

The RAF recently conducted air drop trials of light stores, from both the side paratroop doors and the ramp, and has validated procedures for conducting steep tactical approaches and night vision goggles work.

Collectively, this work is preparing crews for operating in the strategic air transport role, but in a threat environment by putting the aircraft into harm’s way. Wg Cdr Boyle said recent trials undertaken on an unprepared surface constructed at Woodbridge in Suffolk by Airbus Defence and Space were watched closely by the RAF: “Airbus conducted a number of trials into the strip in August last year and we were able to look in on those trials and see how the aircraft was performing. Whilst I could not validate them, because it wasn’t an RAF aircraft or an RAF crew flying it, the results looked impressive and we’re very interested to understand more about that capability as we move forward.”

The 11,000shp EuroProp International TP400 turboprop engine may well be the most powerful turboprop in production, but the engine has caused significant challenges to the A400 programme. Sean McRandle

Other recent trials conducted by Airbus Defence and Space in the UK were a series of paratroop trials with the British Army’s low-level parachute, which were also reportedly judged to be a success.

The path forward, however, is about collaboration not just between Airbus Defence and Space and the Royal Air Force, but also with the other European partner nations and Malaysia, the first export customer for the aircraft.

Concluding his discussion with AIR International, Wg Cdr Boyle said: “The A400M has had a difficult entry into service phase, but it really feels like we’re getting the kind of momentum behind the programme that we would hope for and expect to see. From the UK perspective, we’re heartened by that. We’ve always believed this aircraft has a considerable amount of latent potential; it’s really starting to deliver on that, and we look forward to working with our European and Malaysian partners, together with Airbus Defence and Space to continue to drive the programme forward. The RAF needs this aircraft in full operational service, it’s really important we get there quickly and successfully. The only way we can do that is through collaboration – and this will be a key theme of the years ahead.” 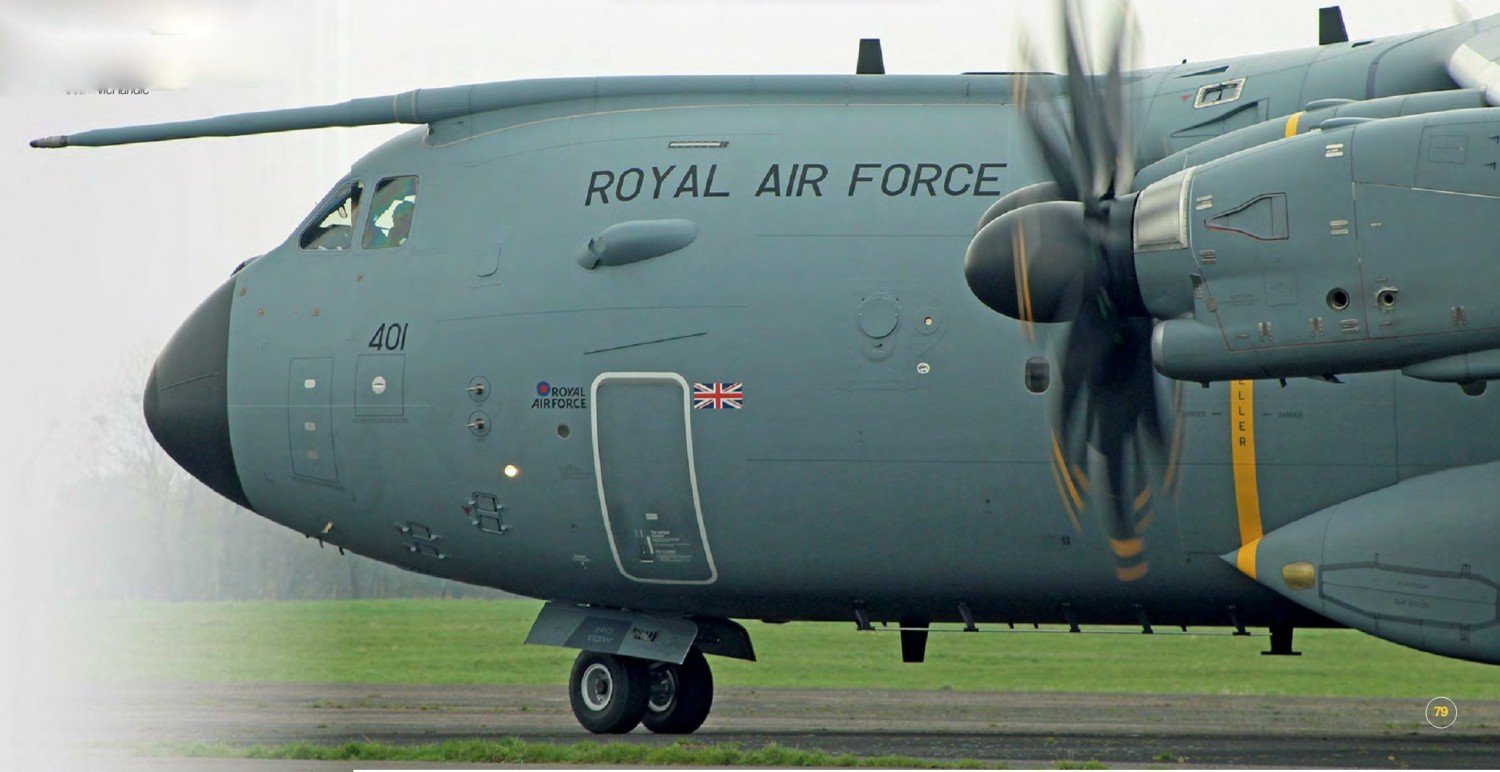