All In for Exercise Red Flag

After an eight-year absence, this past August the Ejército del Aire once again participated in Exercise Red Flag, when it sent eight EF-18Ms and two KC-130H Hercules tankers to Nellis Air Force Base.

Six months later and while the results of the previous deployment were still being studied, eight Eurofighter Typhoons departed Morón Air Base near Seville on February 18 bound for Red Flag 17-2, the first time Spanish Typhoons have participated in the US Air Force’s premier air exercise. The Typhoon entered Ejército del Aire service back in 2004.

Despite speculation that Spanish

Typhoons would participate last year, the decision was made to attend this year, because the aircraft has now reached a sufficient maturity with both operating units, Ala 11 based at Morón and Ala 14 based at Albacete, to gain an optimal level of training in both air-to-air and air-to ground missions.

Execution and evaluation of the Typhoon’s air-to-ground capabilities during Red Flag 17-2 is the principal reason for the debut attendance.

In preparation for the exercise one month before flying to the United States, both units dropped live air-to-ground weapons at the Bardenas Range, near Zaragoza. Aircraft from both Morón and Albacete undertook inflight refuelling missions with an Aeronautica Militare Italiana KC-767A while the tanker was detached to Albacete to support course 17-1 of the NATO Tactical Leadership Programme.

Spain’s Mando Aéreo de Combate (MACOM or Air Combat Command) had responsibility for planning, directing and executing the deployment and participation of the units involved in the air exercise. (Red Flag 17-2 took place at Nellis between February 27 and March 10.) MACOM’s objective was to improve advanced training for both Typhoon units and is responsible for conducting post-exercise analysis.

Dubbed Agrupación Aérea Expedicionaria Red Flag 17-2 (AA-EXP RF 17-2), this Air Expeditionary Task Force was formed to operate outside of Spanish national airspace in a complex theatre of operations with a high threat laydown as part of an international coalition. 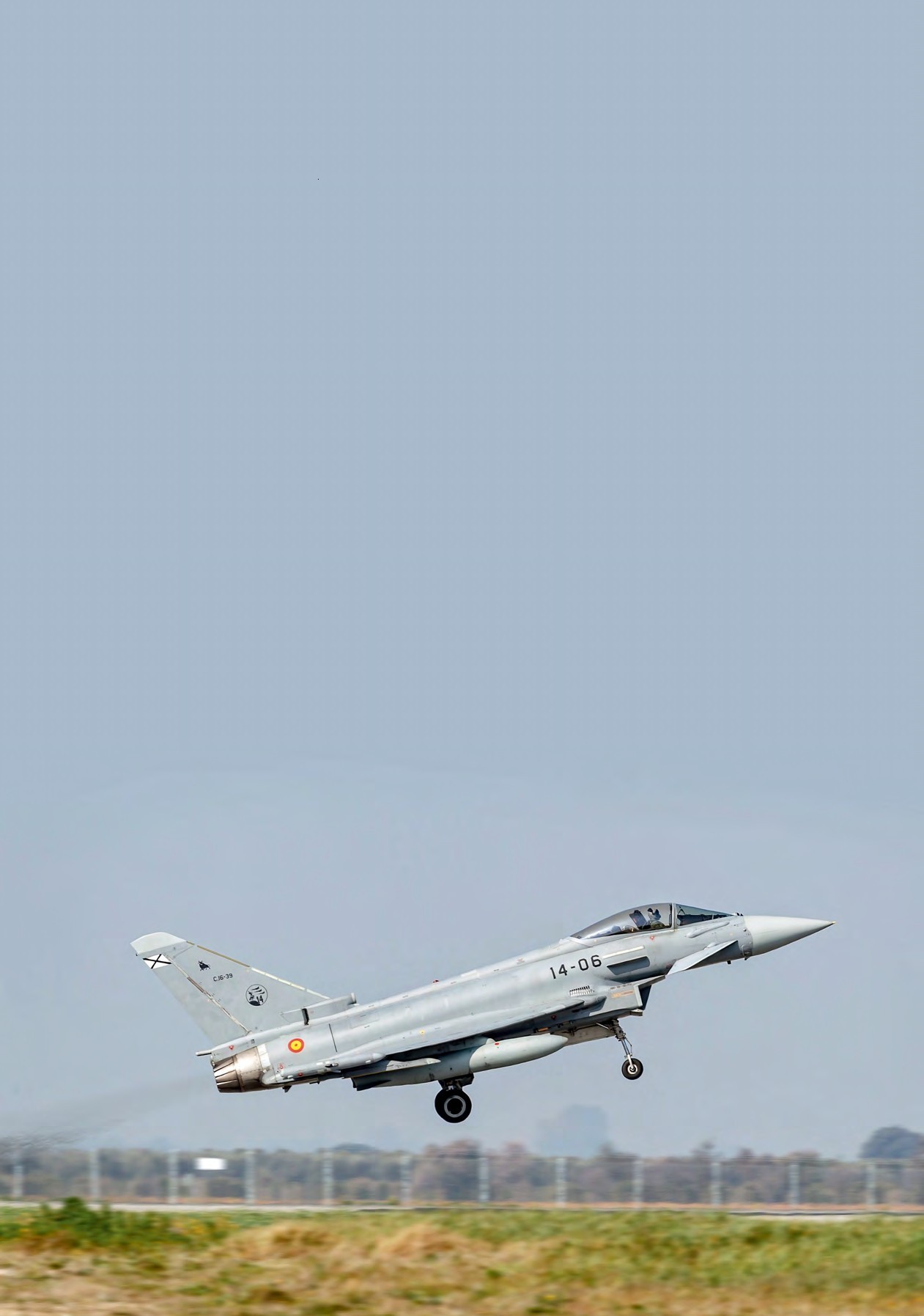 Two Ala 11 Typhoons in formation near Morón Air Base, Seville. 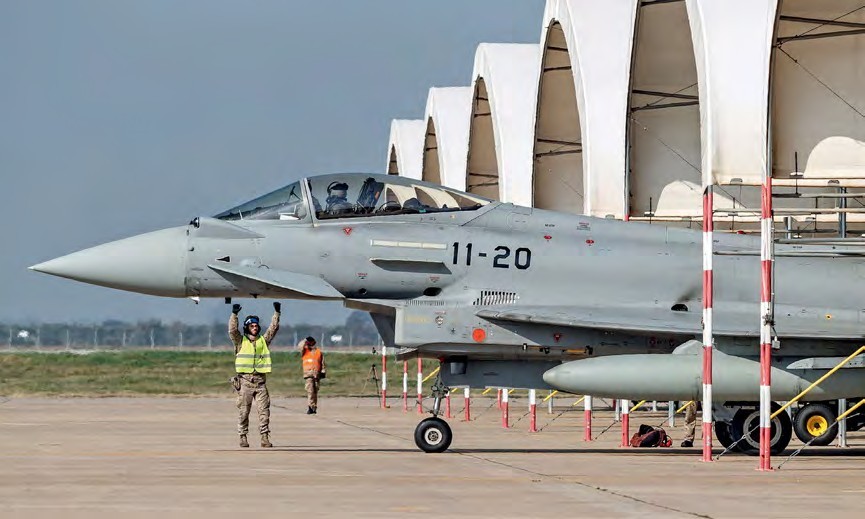 111 Escuadrón, one of two Typhoon units assigned to Ala 11, participated in Red Flag 17-2 with five aircraft and conducted mostly air-toground missions.
All photos Roberto Yáñez unless otherwise stated

The operation was divided into four phases. Phase 1 commenced on February 15 with activation of the Air Expeditionary Task Force and staging of the participating Typhoons, spare and support aircraft, and the general briefing for the exercise.

A day later, Phase 2 began with the deployment of 22 personnel to Nellis charged with receiving the task force and prepositioning three KC-130H Hercules at Lajes Air Base in the Azores. At the same time, two Aeronautica Militare Italiana KC- 767A tankers arrived at Morón to accompany the Typhoons on the various stages of the trip to Nellis. On February 18, one of the three Hercules pre-positioned at Lajes left for Bangor, Maine; the other two remained there with the support team awaiting the arrival of 10 Typhoons (two of which were spare jets) and the accompanying KC-767As. 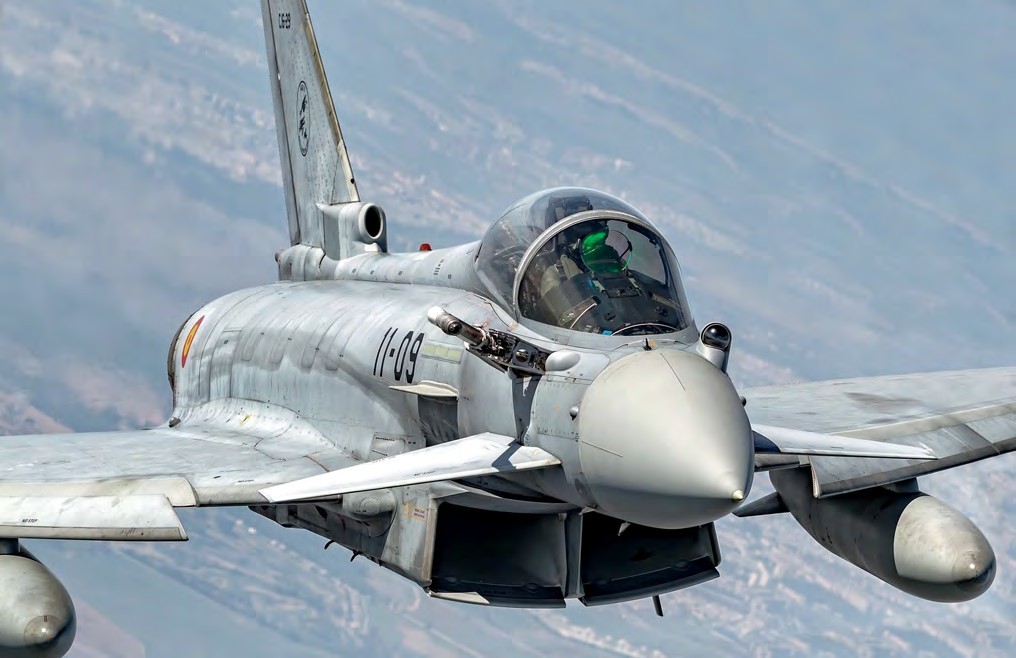 Before taking part in Red Flag 17-2 Spanish Typhoon pilots from Ala 11 and Ala 14 undertook air refuelling training with an Italian KC-767A.

Providing search and rescue (SAR) coverage for the Atlantic crossing to Bangor on February 19 were a Grupo 22 P-3 Orion and two CN235 VIGMA aircraft. Two groups of aircraft, a KC-767 and four Typhoons, arrived at Bangor for a refuelling stop before heading south to Naval Air Station Norfolk, Virginia. All three KC- 130s also arrived at Norfolk via different refuelling stop destinations.

All three SAR aircraft returned home on February 20 after completing their mission without incident, the P-3 from Bangor and both CN235s from Lajes. That day, all eight Typhoons, both KC-767s and the three Hercules arrived at Nellis after direct flights from Norfolk. Further support aircraft involved an Armée de l’Air A400M and a 45 Grupo Airbus A310. 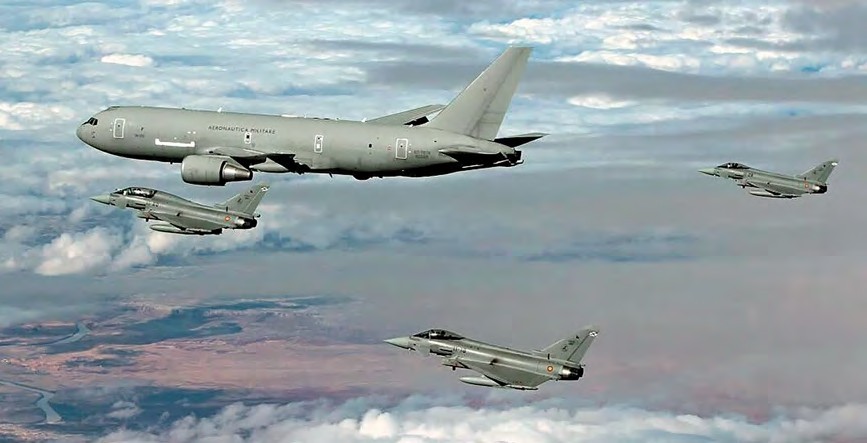 An Italian KC-767A in formation with three Ala 11 Typhoons over the United States on the way to Nellis.
Ejército del Aire

Between February 21 and 26, Typhoon and Hercules pilots conducted 24 familiarisation and integration flights with other participants.

Phase 3 was the live exercise and Phase 4 the redeployment that started on March 10 and concluded four days later when the entire task force arrived back in Spain. 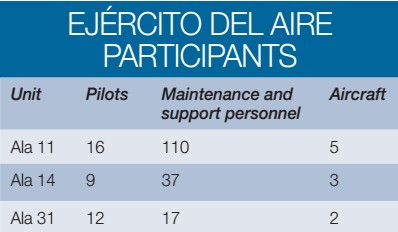 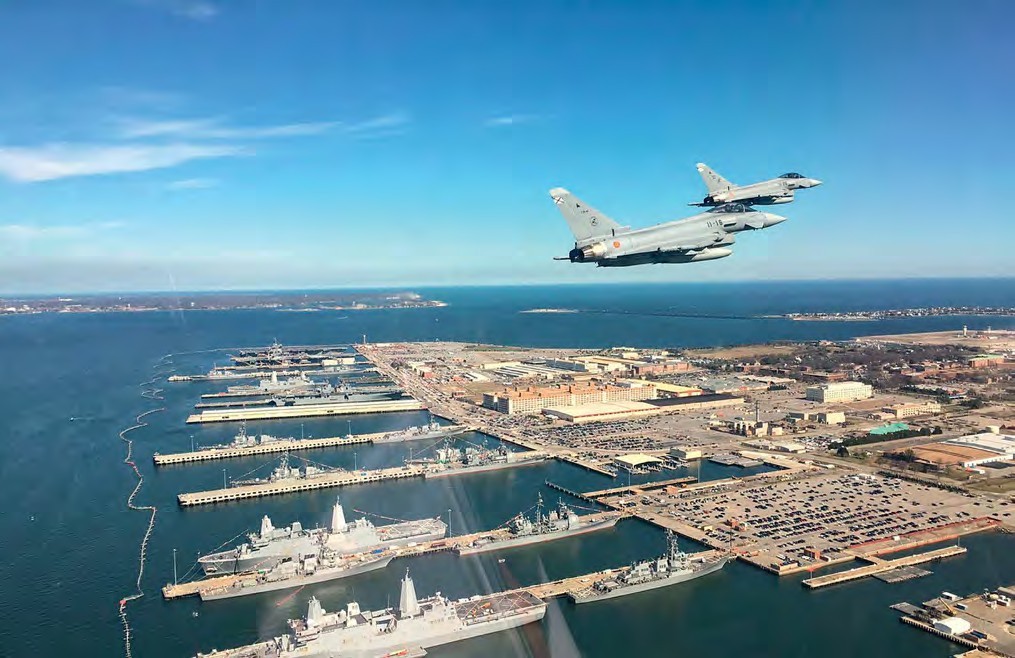 For the first time, Ejercito del Aire Typhoons overflew Naval Base Norfolk on their way to nearby Naval Air Station Norfolk.

Thirty individuals formed the exercise control group responsible for tracking and analysing results of the exercise and evaluating the missions against the planned training objectives.

Ejército del Aire aircraft and personnel took part in two daily flying periods, one daylight (from 11:00hrs to 02:00hrs the next day) and a night-time period (from 18:00hrs to 08:00hrs the next day). Daily operations spanning 21 hours necessitated a two-shift manning system for the exercise centre, from where Spanish personnel were able to track in real time the 124 sorties planned for Ejército del Aire aircraft during two-week exercise. Sorties comprised 54 air-to-air, 60 air-to-ground, eight air refuelling and two tactical airlift.

As Spain’s most experienced Typhoon unit, Ala 11 was tasked with flying the greater number of sorties, undertaking 80% of its missions in the air-to-ground role, while the remaining were air-to-air missions. Albacete-based Ala 14 dedicated all of its 40 sorties to the air-to- air role, because its air-to-ground capabilities are still being implemented. 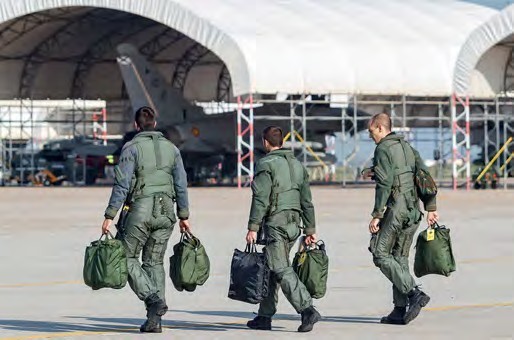 Ejército del Aire pilots walk to their aircraft for the first leg between Morón and Lajes. 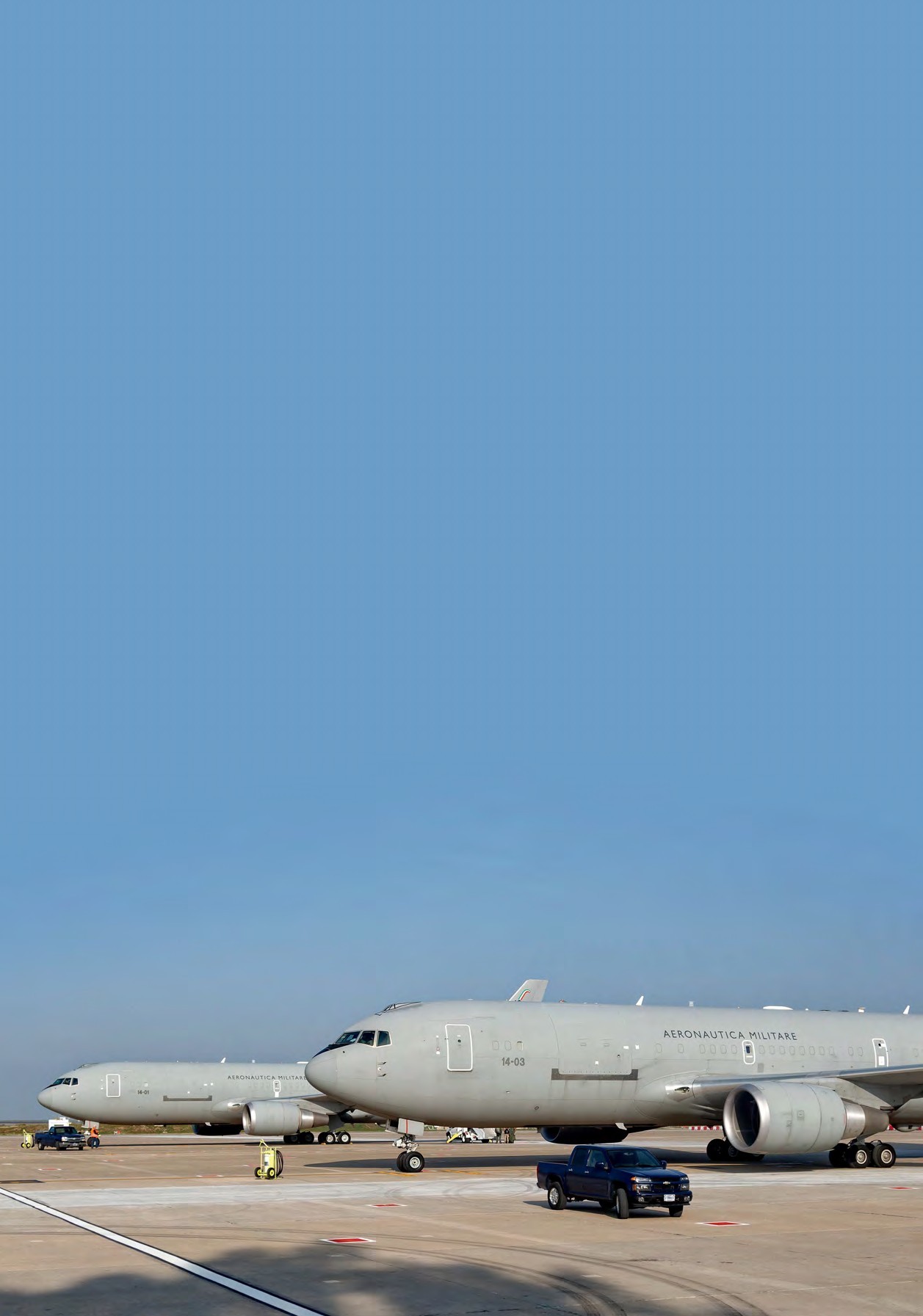 The Aeronautica Militare supported the Ejército del Aire’s Red Flag operation with two KC-767A tankers for the deployment and redeployment phases. Retirement of 47 Grupo’s Boeing 707TT has seriously hampered the Ejercito del Aire’s strategic projection capability, so it’s common to enter into agreements with other countries for tanker support.