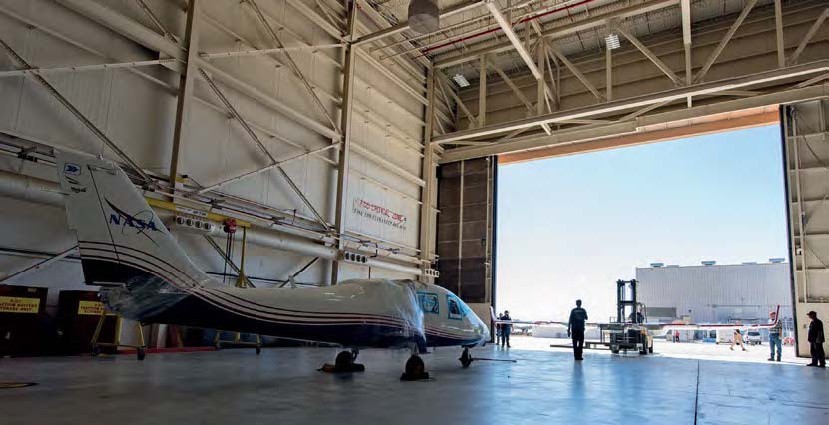 The NASA X-57 Maxwell has arrived at Edwards Air Force Base as work continues to prepare the electric aircraft for flight. NASA

The aircraft is currently in the first of three primary configurations as an all-electric aircraft, known as Modification II, or Mod II, which involves testing the aircraft’s cruise electric propulsion system. Although the X-57 looks similar to the Tecnam 2006T aircraft on which it is based, the aircraft’s two traditional inboard engines will be replaced by two inboard electric motors, essentially turning the aircraft’s propulsion system electric. Shortly after the electric system is integrated into the X-57, the aircraft will undergo ground taxi tests at NASA Armstrong to examine and validate the safety and functionality of the electric motors, battery and instrumentation.

The delivery to Edwards is therefore a major milestone for the project, but work is already underway on the project’s following phases, Mod III and Mod IV. Loads testing on the aircraft’s high-aspect-ratio wing at NASA Armstrong’s Flight Loads Laboratory has been completed, and the wing will now undergo fit checks on a fuselage at ESAero.

In Mod III, electric motors developed by Joby Aviation mounted outboard on the wing tips and nacelles along the leading edge of the wing will be installed. Taxi tests will once again take place and upon safety inspection and validation the X-57 will, in Mod IV form, start flight testing.

A goal of the X-57 project is to help develop certification standards for emerging electric aircraft markets, which rely on complex distributed electric propulsion systems. The project is an example of the greater interest in electric technologies and NASA says it intends to share the aircraft’s electric-propulsion-focused design and airworthiness process with regulators and industry, which will advance certification approaches for aircraft using distributed electric propulsion. Mark Broadbent