Kevin Wills and Ian Harding went aboard HMS Queen Elizabeth prior to its port homecoming, to find out about a cruise to the US eastern seaboard and the sterling work undertaken by Merlin HC4- equipped 845 Naval Air Squadron 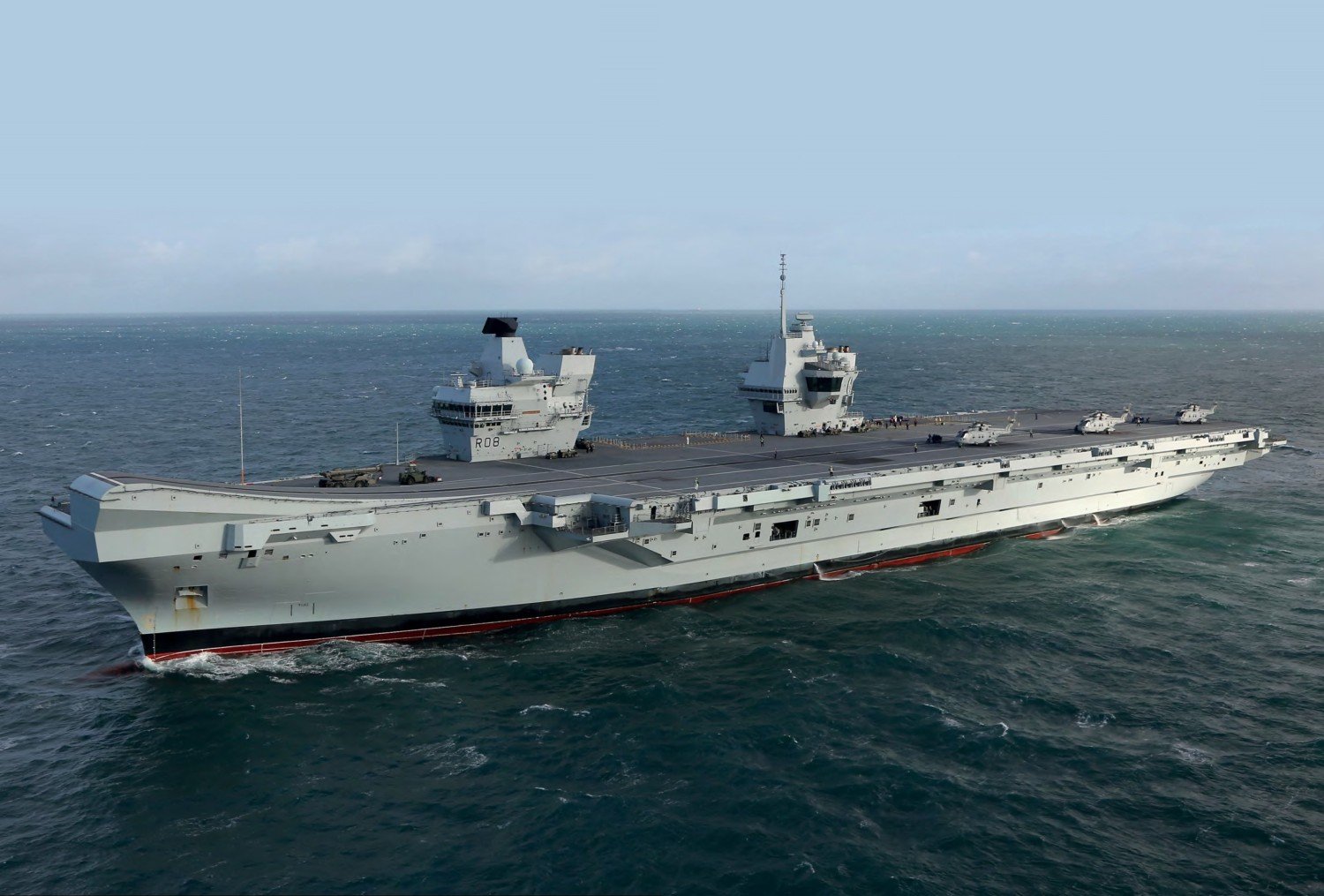 Assigned to Commando Helicopter Force (CHF), 845 Naval Air Squadron (NAS) embarked aboard HMS Queen Elizabeth on August 20, 2018, with three upgraded Merlin HC4 helicopters and approximately 90 personnel. Premise for the deployment was to support the carrier’s first-of-class F-35B flight deck trials and the ability to work with other nations’ maritime forces. This included the landing of Royal Marines and their equipment ashore in the United States, and to conduct training with its US counterparts.

The squadron had four specific roles:

• Maritime intra–theatre lift (MITEL), which involves the movement of cargo and personnel around the maritime task group

Embarkation and involvement was not intended solely to generate helicopter ops, but to hone aircrew skills in picking up a pilot in the event an F-35B ditched during a trial, or was shot down behind enemy lines in a simulated scenario. Training was conducted alongside US Marine Corps personnel from Marine Corps Base Quantico, Virginia.

From the outset, media and political attention was naturally focused on the historic first landing and the F-35B flight trials aboard HMS Queen Elizabeth. The three 845 NAS Merlin HC4s and three 820 NAS Merlin HM2s played a vital role in the series of trials.

In the months preceding this historic event, CHF and 845 NAS had been working hard to ensure its new Merlin helicopters could embark as planned.

Embarkation was uncertain caused by a delay with delivery of the first Merlin HC4 from early 2018 to May 24. Further delays ensued as the release to service (RTS) for the first aircraft was not received until mid- June. Qualified helicopter instructors were trained by Leonardo Helicopters, which delivered a conversion package for the squadron only weeks before deployment. It was touch and go whether the aircraft would be ready. Cdr Bond said: “WESTLANT 18 had been years in the making. Our major concern was our inheritance of the Merlin HC3, Merlin HC3A, which required a major upgrade [to HC4 standard] and that configuration may not have been ready for the first deployment. Our approach from the outset was to deliver a reliable DSAR capability without compromising safety. Quite simply, if we were not ready we would not go. As it became clear there would be delays with the HC4, we decided to complete our DSAR training on our HC3As and then convert aircrew once the HC4 obtained its RTS on August 18, 2018. This period was fraught, extremely challenging, but ultimately very rewarding. It was therefore a proud moment on August 20 as the squadron embarked three brandnew HC4s when six months earlier the expectation was the HC4 would likely not be ready. To train and qualify aircrew in the areas required in such a short space of time was a fantastic achievement, which was recognised throughout the Royal Navy.”

Converting from the Merlin HC3 and Merlin HC3A to the HC4 involved approximately six flights. Aircrew had few problems converting; the key issue was understanding the aircraft’s new touchscreen digital cockpit. In June 2018, 845 NAS embarked HMS Queen Elizabeth with two Merlin HC3As and its entire flight. Cdr Bond said: “This proved a significant move as it enabled the squadron to integrate with the ship, to understand its operation, complete some DSAR training and effectively de-risk the August embarkation.”

According to Cdr Bond, within weeks of embarkation the squadron had completed its deck training and declared DSAR full operational capability on September 5.

He said: “Prior to embarkation of the jets, we had time to understand how we were going to operate on the deck, including the folding of the aircraft and how the hangar worked, all the while working towards generating a decent deck tempo, which would be crucial. This was an evolutionary, bordering on trailblazing, process. There was no manual, we had to determine what worked and what didn’t to establish our standard operating procedures, which would potentially last decades.”

Providing MITEL, moving people and cargo around the maritime task group and ashore, was pivotal to the successful achievement of the trials. God forbid any of the test pilots should need to eject, 845 was on call 24/7 to support them and the near 200 ITF personnel aboard for the trials.

This logistics support included routine 150 nautical mile (240km) flights to shore to maintain mission continuity. The squadron’s success can be measured by the results of the trials; the objectives of Developmental Test periods DT 1 and DT 2 were achieved, as well as elements of DT 3 and components of Operational Test period OT 1 in advance of WESTLANT 19. 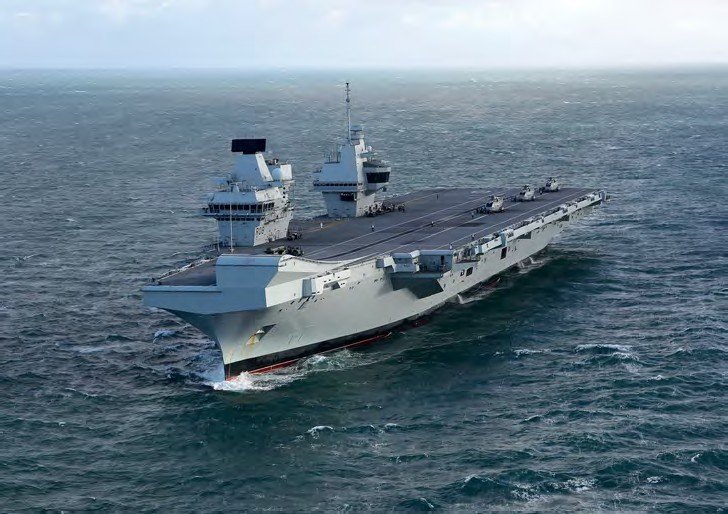 Merlin’s were airborne throughout each F-35B flight to provide DSAR. The squadron skipper said there were generally two operational test periods per day, each lasting two to three hours. For the duration of the missions, 845’s Merlins were held in the hover next to the ship waiting to respond to any incident with another on deck standby, a role known as plane guard. Afternoon missions were often extended into the evening, with 845 NAS aircrew flying long hours; Merlin was often the last aircraft to land. Any MITEL requirements generally took place before the F-35B trials commenced, but as the trials developed, other rotary assets were able to operate generating a busy flight deck.

The Merlin continues to prove its worth at sea. It is considered the aircraft of choice both in terms of its capability and safety. In Cdr Bond’s opinion, if you designed a maritime support helicopter it would be the Merlin HC4.

He said: “It provides the Royal Navy with the highest levels of utility in the maritime environment and is optimised for amphibious operations delivering Royal Marines from the ship to shore. Boasting a folding head and tail, we were able to operate this capability whilst on board. You can fit three Merlin’s in the same space required by a Chinook, which is an important consideration when operational space is limited above and below deck. Merlin HC4 is fully configured for maritime ops and can withstand the exposure to the harsh environmental conditions for long periods of time.”

These trials provided 845 NAS and 820 NAS with the perfect opportunity to showcase Merlin’s utility and potential. From CHFs perspective, this includes the development of an aerial refuelling capability (already successfully trialled by Leonardo) to extend operational range, plus the introduction of an M3M machine gun and secure datalink communication (already installed in the Merlin HM2).

UK F-35Bs will operate at distance from the carrier and the MoD will need a capability potentially to extract aircrew from behind enemy lines. CHF and 845 NAS are well rehearsed in this role, having worked closely for the past two years with 42 Commando, Lima Company which is the UK’s ground extraction force.

This included participation in the European Air Centric Personnel Recovery Operatives’ Course 2018 held in the Netherlands.

Bond explained that the squadron know the JPR requirement is being developed by the MoD and that the unit wanted to get ahead of the game and generate this capability. He said: “Tactically, we are in a good position as we have worked extensively with Royal Marines, with both elements understanding exactly what they need to do when we lift from the ship. Of course, we need to enhance the capability in terms of fixed-wing support [and] close air support and we need to consider ways we can supplement the existing capability with Wildcats, for example. We also need to extend our radius of action from the carrier, hence the requirement for aerial refuelling. The Merlin has over three hours of endurance, but it will ultimately need more with our F-35Bs operating so far from the carrier. We have airto- air refuelling probes; we just don’t have the RTS at the moment. Secure communications are due to be fitted in the near term to ensure we can communicate with the commanders on board during live operations.”

Leonardo Helicopters will deliver 25 Merlin HC4s to CHF at RNAS Yeovilton by 2021. Under the current plan, 845 NAS will receive 12 aircraft with sister squadron 846 NAS (responsible for operational conversion training) receiving nine, with four planned to be in deep maintenance. Thus far, 845 NAS has received five HC4s, with 846 NAS receiving its first Merlin in February 2019.

This will enable the squadron to prepare for a refresher Merlin conversion course in April 2019 and ab initio Merlin training.

Cdr Bond reckons that managing the complex transition process concurrently with delivering a range of capabilities to the fleet is testing. He said: “During the next couple of years there will be various upgrades; tactical system enhancements, increased AUM [all up mass] and DAS [defensive aids suite], before we have a fully capable HC4 by 2021. We currently have five HC4s and three HC3As, so we are not too far away in pure numbers terms. Attention now turns to 846 NAS, [which needs] to generate HC4s and the qualified helicopter instructors required for Commando 1 [the first Merlin HC4 course] starting in 2020. Sister squadron 846 will be training many crews in the coming years, growing the force to initial operational capability in 2020 and FOC in 2023.” 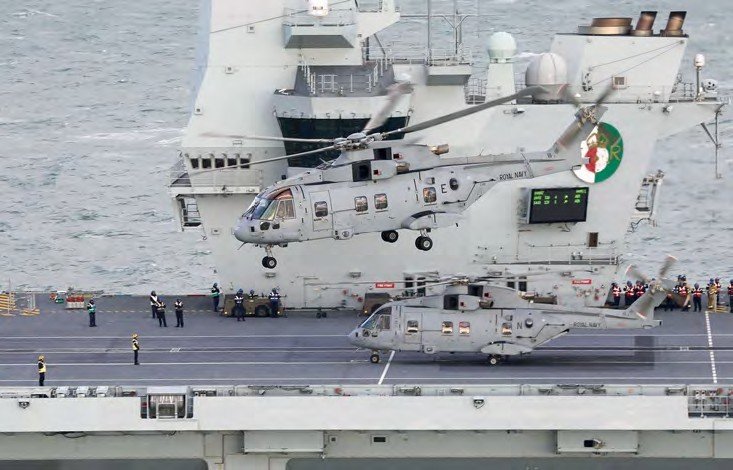 Merlin HC4 ZJ121/E lifts off the flight deck on its return to Yeovilton. The nose marking applied to each of the 845 Squadron Merlin HC4s reminded everyone of the call sign and no doubt prowess. 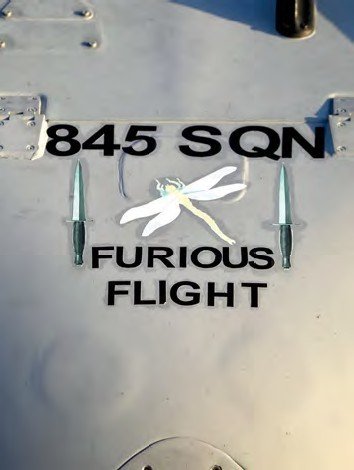 How the UK intends to use its two aircraft carriers in the future is still evolving and ultimately will depend on their two roles: carrier strike (primary) and the future concept hybrid littoral strike (secondary). This would potentially incorporate a mix of F-35Bs and different types of helicopter, plus Royal Marines. This mix offers flexibility and the agility to switch from one operation to another. The Maritime Task Group could then facilitate a range of operations from humanitarian relief to high-end warfighting. Its size and the aircraft deployed would ultimately be determined by the scale of the threat and the strike force required to counter it. Broad consensus is three to four Merlin HC4s would be required to support regular DSAR and JPR, but this number could expand during LitM, with 845 NAS supporting 3 Commando and a wider field army, which is its core role. An unknown number of Merlin HM2s will also be required to provide airborne surveillance and control, anti-submarine and antisurface warfare capability.

CHF also includes the Wildcat-equipped 847 NAS and other specialised mobile units and is set up to provide an array of capability. CHF and its component units will be extremely busy during the coming years supporting a range of roles embodied within the carrierenabled power projection concept, namely carrier strike group and LitM deployments. Discussing the core business of LitM, the squadron skipper said 845 will support 3 Commando Brigade and the littoral strike concept with Merlin HC4 and our amphibious expertise. He said: “Our return to the maritime and littoral environment after so many years of land-centric warfare is exciting.” AI 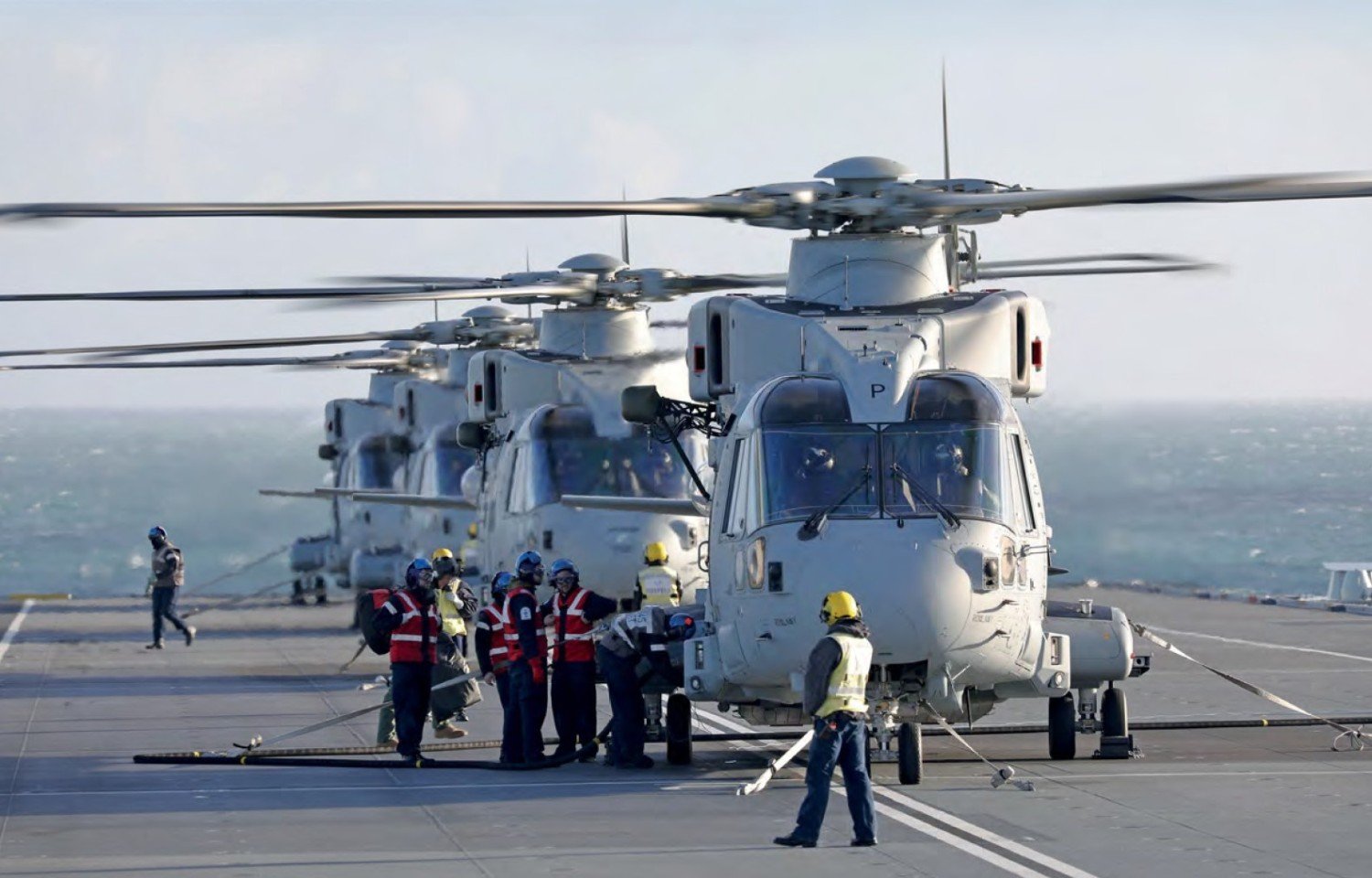 Four Merlin HC4s on HMS Queen Elizabeth’s flight deck prior to their departure back to Royal Naval Air Station Yeovilton.