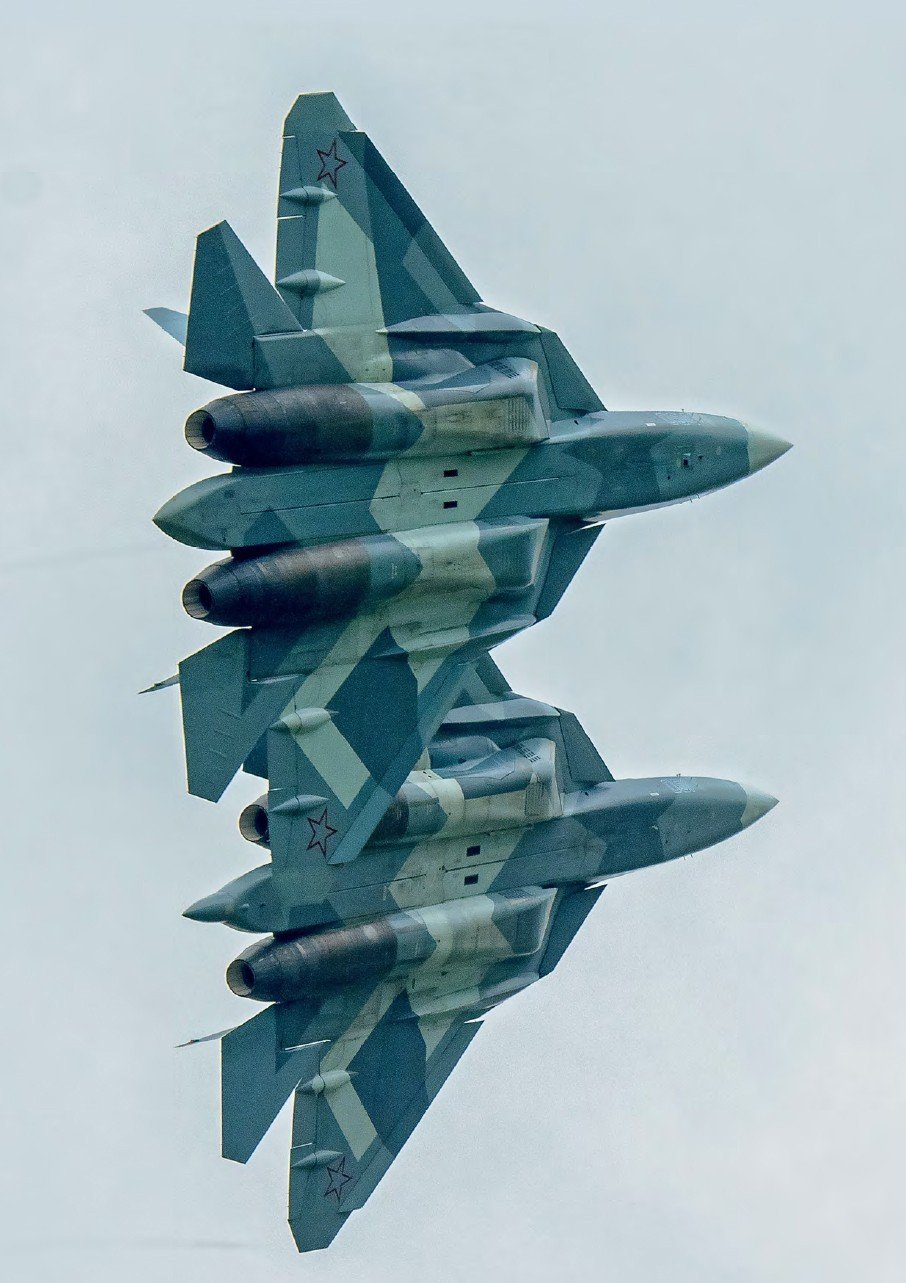 After successful completion of the first stage of T-50 testing, a preliminary conclusion of the test programme was signed at MAKS 2017. The state commission recommended production of an initial batch of aircraft which are to be assigned the new Su-57 designation.
All photos Piotr Butowski

Russian president Vladimir Putin was expected to visit a specially erected hangar during the opening ceremony on the first day of this year’s MAKS 2017 air show. In front of the latest PAK FA prototype, T-50-9, in Putin’s presence, the preliminary conclusion on the first stage of T-50 testing and a recommendation to produce an initial batch of the fighters was to be signed. In addition to the planned signing, the T-50 was due to be officially designated the Su-57. Neither event happened. Due to lack of time Putin did not visit the hangar. The documents on testing and initial production were signed two days later, and the new designation was officially announced by the Russian Air Force Commander-in-Chief Viktor Bondarev on August 11.

Choice of Su-57 as the official designation of the T-50 PAK FA is because it is the latest in a series of gradually improved long-range air-superiority fighters. The Su-27, the first in the series, appeared in 1982 and is the backbone of the Russian Air Force’s fighter fleet. The Su-37 was an experimental aircraft, originally built as a Su-27M with side number 711; it appeared in 1994 fitted with thrust-vectoring engines. The Su-47 Berkut was another experimental fighter from 1997 and Sukhoi’s first attempt at building a new-generation fighter featuring a forward-swept wing.

• N036B side-looking X-band arrays consist of 358 transceiver modules each; the lateral arrays are used for widening the angle of search and tracking targets in azimuth up to +/-135° from the aircraft’s axis

• 101KS-U/01 (U for ultraviolet) is a side-looking ultraviolet missile approach warning sensor (MAWS); two are mounted on the fuselage sides, just aft of the cockpit

• 101KS-U/02 sensors are shaped like a house with two windows, one looking forward and the other to the rear; one such sensor is mounted under the forward fuselage, and the other on the upper surface of the fuselage

• 101KS-O sensors, one on the fighter’s spine and another under the nose; the purpose of these sensors remains unclear

• 101KS-P (Posadka/Landing) device comprises a small imaging infrared sensor to aid low-level flying and landing; it is fitted in the forward section of the canoe-shaped underwing missile bay

• 101KS-N (Nazemnyi/Ground) is a navigation and targeting pod; typically in this class of system, the 101KS-N contains a stabilised platform with electro-optical and 3-5μm thermal imaging cameras (they use a common optical package, including the scanning mirror and automatic tracking unit), a laser rangefinder/target indicator and laser spot tracker

Two T-50s performed synchronised aerobatics and a simulated aerial combat during MAKS 2017. As in previous years, the public and press were kept away from the aircraft.

Problems revealed in tests of the initial prototypes have resulted in upgrades to the airframe since the type’s last appearance at MAKS two years ago. Initial production batches will comprise aircraft finished to the current standard. However, work continues to improve the specification of the fighter, including the installation of new engines and mission systems.

The three newest examples differ from the previous five aircraft by having a stronger inner airframe structure. Part of the aircraft’s metal skin has been replaced with composites. The aft fuselage section (housing electronic warfare equipment) is longer, the circumference of the aft lower fuselage, some doors and hatches, as well as wingtips have all been modified. The wingspan has been increased from 14.0m (45ft 11in) to 14.1m (46ft 3in), and the fuselage length from 19.7m (64ft 7in) to 20.1m (66ft); these are estimated data.

The design changes were caused by problems that included structural cracks suffered by the early T-50 prototypes during testing. T-50-1 was taken out of the flying schedule for overhaul for over a year between August 2011 and September 2012 after structural damage caused during a display at MAKS 2011. The airframe now carries various external signs of strengthening. Engine problems have resulted in several singleengine emergency landings. MAKS 2011 was a bad time for the type, with T-50-2 suffering a compressor stall of the starboard engine during its take-off roll; a flame several metres long shot out of the exhaust nozzle and the pilot abandoned his take-off. Embarrassingly the fifth aircraft, T-50-5, caught fire on the runway after landing during a presentation for an Indian delegation on June 10, 2014. Its subsequent overhaul at Komsomolsk-on-Amur lasted 16 months. It is now designated T-50-5R and resumed flight tests after the repair on October 16, 2015. 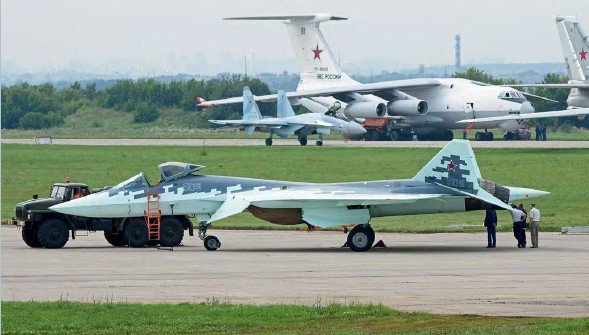 T-50-9 509 was supposed to be shown to Vladimir Putin in a separate, closed pavilion, painted in similar large pixels. The type’s new Su-57 designation was supposed to be officially announced there, but the ceremony did not take place.

As well as the industry test centre in Zhukovsky, since February 2014 the T-50 prototypes have been under evaluation by military pilots at the MoD’s test centre at Akhtubinsk. Vladimir Mikhailov, the former commander-in-chief of the Russian Air Force, told Russian television in March 2016 that the T-50 had launched a weapon from its internal armament compartment for the first time. 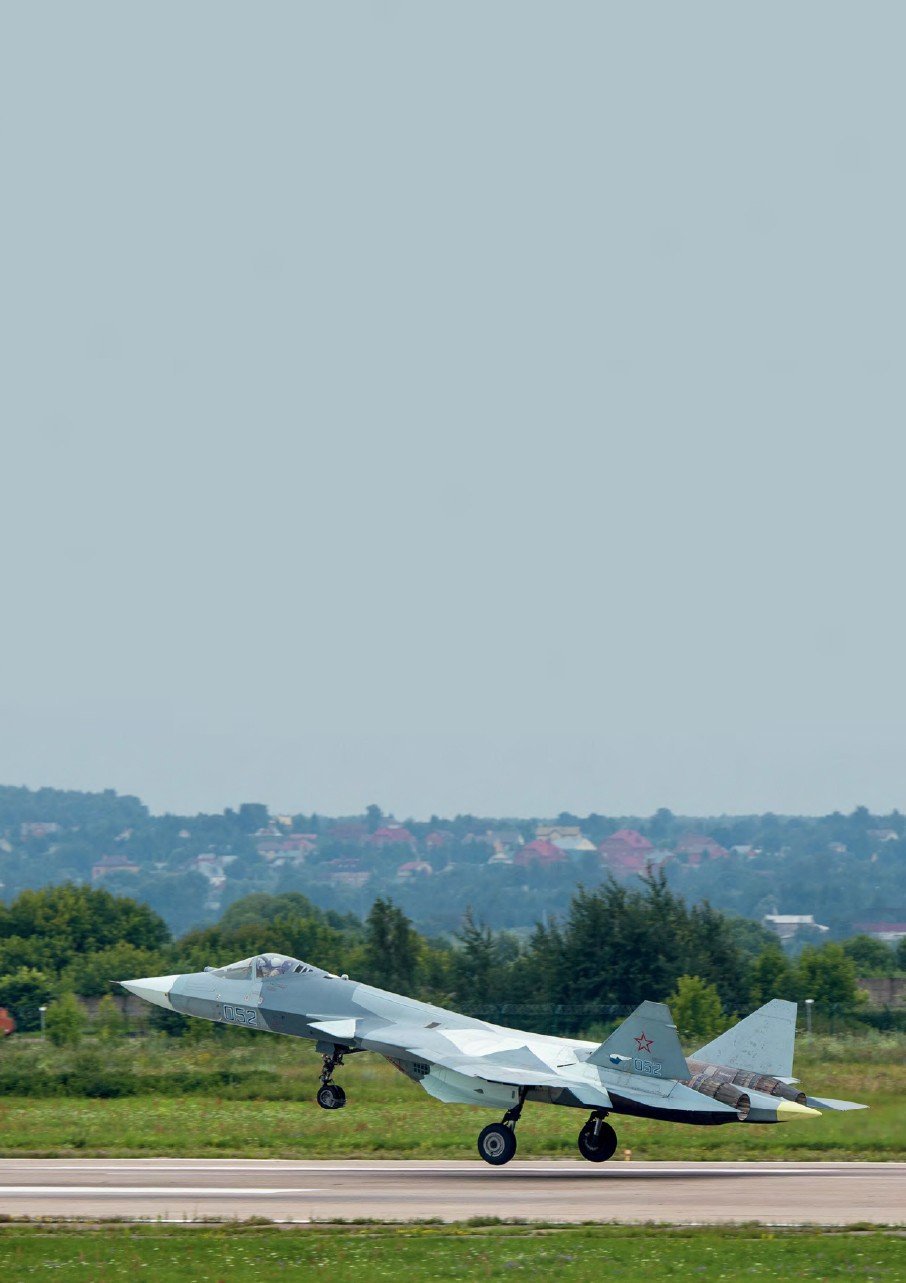 T-50-2 landing at Zhukovsky showing some of the modifications made to the aircraft during the first stage of testing. The main undercarriage doors are re-shaped and the fairing of the electronic countermeasures antenna located between the engines nozzles is new.

The latest aircraft, T-50-9, is the first to have a sensor suite like production versions of the Su- 57. Previous prototypes had only partial suites and/or structural mock-ups of the sensors.

All the Su-57’s systems and sensors are coupled and controlled by a central computer. The Sukhoi Design Bureau is responsible for systems integration, which is a novelty. In the past, fire-control and flight navigation systems were integrated by instrument manufacturers. On Sukhoi fighters, this work was usually entrusted to RPKB of Ramenskoye. The sensor suite includes the Sh121 radio-electronic system and 101KS electro-optical system. The Sh121 suite developed by the Tikhomirov NIIP institute in Zhukovsky comprises the N036 radar and the L402 electronic intelligence and electronic countermeasures (ECM) suite. The NIIP N036 Byelka (squirrel) radar has five active electronically scanned arrays, three X-band (37.5 to 25mm wavelength) and two L-band (300 to 150mm wavelength), that together control the airspace within the angle up to 270° (+/-135° from the aircraft’s axis). Use of L-band radar in air-to-air mode is the T-50’s main means of dealing with stealth targets, which may be detected (but not targeted) by radio waves longer than the X-band for which the radar cross-section’s reduction is typically optimised. According to the head of NIIP Yuri Belyi, the N036 radar installed on T-50-9 was the last one to be made by the experimental production facility of NIIP’s design bureau at Zhukovsky; subsequent aircraft will be fitted with radars made by the GRPZ production facility of Ryazan.

The L402 Gimalai (Himalaya) ECM suite developed by the KNIRTI institute in Zhukov near Kaluga and manufactured by the Signal factory in Stavropol is provided with its own aerials, but when working within the same range of frequencies used by the radar it utilises the N036’s arrays.

The 101KS Atoll electro-optical suite produced by UOMZ in Yekaterinburg is intended to provide full control of the space around the aircraft in the optical range, as well as self-defence against missile attack. The Atoll includes the forward-looking 101KS-V infrared search-and-track (IRST) sight, four ultraviolet missile approach warning sensors (MAWS) that cover the whole sphere around the fighter, as well as two 101KS-O sensors that UOMZ says are directional infrared countermeasures. Another 101KS-P device comprises a small imaging IR sensor to aid low-level flying and landing. The related 101KS-N navigation and targeting pod is under development for the Su-57.

In the official ‘Schedule of activity of Russia’s Ministry of Defence for 2013-2020’ published by the MoD in 2013, the PAK FA’s initial operating capability and the launch of full-scale series production were scheduled for December 31, 2016. This deadline was not met and the document itself is no longer mentioned by anyone. The president of UAC, Yuri Slyusar, said days before MAKS that three more T-50 prototypes would have to be built for the contracted research and development work and the Komsomolsk-on-Amur plant will commence deliveries of the initial batch of productionstandard fighters in 2019. 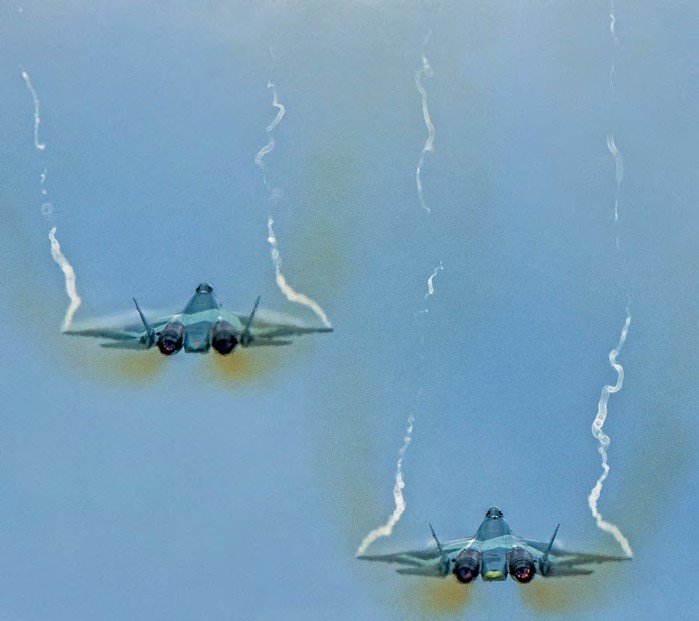 Sergey Bogdan and Sergey Chernyshev flew a demonstration which included aerobatics and an air-to-air engagement. The demonstration was notable though not that dynamic due to flight envelope restrictions. Both aircraft, T-50-2 and T-50-4, are prototypes built without the current upgrade.

According to a press release published by Sukhoi for MAKS 2017 currently: “… the first stage of state trials is nearing its end … Characteristics of stability and controllability at subsonic and supersonic speed, at low and high flight altitudes, as well as on supercritical angles of attack are confirmed.” The first stage of state trials is in fact not a very advanced level of testing; it concludes with the acceptance of the aircraft as a flying vehicle. Only the completion of the second stage, when mission systems and armament are tested, allows the aircraft to be officially entered on the air force’s inventory.

Russia expects to buy fewer Su-57s than previously planned. On March 23, 2015, deputy minister of defence Yuri Borisov visited the plant at Komsomolsk-on-Amur and said that the air force might buy fewer T-50s than planned in the National Armament Programme for 2020 (GPV-2020), buying instead lower-cost Su-30s and Su-35s. Russian media quoted a source within the Russian MoD who stated the air force will order only one squadron by 2020 (Russian fighter squadrons have 12 aircraft), instead of the 60 aircraft promised by GPV-2020.

One reason for the reduction in planned Su-57 production is internal competition from the latest versions of fourth-generation fighters, particularly the Su-35. Apart from the Su-57s stealth qualities, there is little to choose between the two and the Su-35 is constantly being improved. After Borisov’s visit to Komsomolsk-on-Amur, the Russian Ministry of Defence, which has already ordered 98 Su-35S and 116 Su-30SM fighters, issued an official statement about reduction in the number of PAK FAs to be ordered. Added to it was the observation that “the Su-35 fighters of the so-called fourth-plus generation show good characteristics in the opinion of military pilots”.

According to the aforementioned Sukhoi press release, the PAK FA “will be the company’s primary product on the market of aircraft technology starting from 2020”. By this time an upgraded jet, the so-called second stage PAK FA is planned to be available. The updated version will feature new izdeliye 30 engines; the current AL-41F-1 engines (izdeliye 117) are in fact upgraded AL-31 engines as fitted to the Su-27.

An interesting presentation by the United Engine Corporation from 2013 shows production plans as they were then: 150 izdeliye 117 and 340 izdeliye 30 engines to be built before 2025. That means production of the first-stage T-50 was not planned beyond the initial 60 aircraft (currently reduced to 12); the remaining 30 engines are just enough for prototypes and other trials. The other number, 340 izdeliye 30s, is interesting. Deducting, some engines for tests, suggests that production of 150-160 second-stage T-50 fighters during 2020-2025 was planned. Now the plans are undoubtedly being downsized.

The first demonstrator of the izdeliye 30 engine ran in a ground testbed on November 11, 2016. It is still claimed that flight trials of the engine will begin in 2017.

The izdeliye 30 is a clean-sheet design intended to offer increased thrust of 16–17 tonnes compared to 14.5 tonnes today, to be lighter, and have fewer parts and lower operating costs. Stealth features are to be introduced. The engine’s cold section will have a three-stage compressor (instead of four as in the current 117 engine) and a single-stage turbine; the hot section (engine core) will have a five-stage compressor (instead of a nine-stage one) and a singlestage turbine.