Boeing B-17G Flying Fortress 44-83785/ N207EV Shady Lady left its long-term home at the Evergreen Aviation and Space Museum in McMinnville, Oregon on 7 August and is now at American Aero Services, New Smyrna Beach, Florida where it will undergo restoration work before being delivered to its owners, the Collings Foundation (CF) at Stow, Massachusetts. The bomber — which was delivered to the USAAF in early 1945 and was used to transport cargo and passengers in the USA for the remainder of the war — had been on static display at McMinnville for the past 16 years, and was acquired by CF from Evergreen during 2015.

Originally bought by Evergreen Helicopters in 1975, the B-17 spent 10 years as a firebomber before work to restore it back to World War Two configuration, with turrets and an operating bomb bay, began in 1985. It flew again during 1990, appearing at many airshows until 2001, when concerns about the wing spar attachment points grounded the bomber.

Although the airframe’s identity is thought to be 44-83785, some historians think the B-17 is actually 44-85531. In the mid-1950s, it was one of five examples transferred to the CIA for secret duties. Painted black, the aircraft were operated by ‘Western Enterprises Inc’ from Taiwan, dropping agents into China from a hatch where the ball turret had been. They were also based at Kurmitola, eastern Pakistan to parachute agents into Tibet. In November 1957 the B-17s were transferred to Clark Field in the Philippines from where they flew lengthy, classified missions. 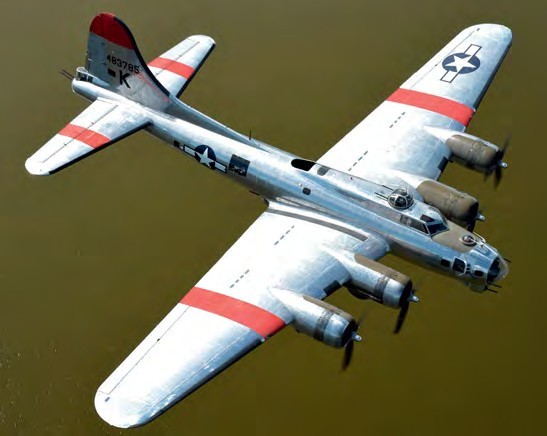 For security purposes, the serial numbers on the tail of the B-17s were regularly changed, creating some doubt regarding the bombers’ real identity. During September 1960, the machine was registered N809Z and sold to Atlantic-General Enterprises, a CIA front company. It moved on to Intermountain Aviation Inc, which was also linked to the CIA, at Marana, Arizona in 1962. Intermountain specialised in modifying aircraft for specialised operations, the B-17 being fitted with a Fulton Skyhook recovery system involving a rig in the nose for picking up personnel from the ground without the inconvenience of having to land. Later that year, N809Z flew a secret mission to the North Pole, dropping two agents at a Soviet ice station and retrieving them three days later, complete with freshly acquired, classified information. During 1965 the aircraft was to participate in a fictitious Cold War spy story, being used to pick up James Bond (Sean Connery) and his girlfriend from the sea at the end of the film Thunderball. It was then converted into an air tanker and used by Intermountain Airways to fight forest fires in the western United States, before becoming tanker 71 with Evergreen at Marana, Arizona in March 1975.

The B-17 is the second example to join the Collings fleet: 44-83575/N93012 Nine-O-Nine participates in the foundation’s Wings of Freedom tours around the USA, giving rides and displays.