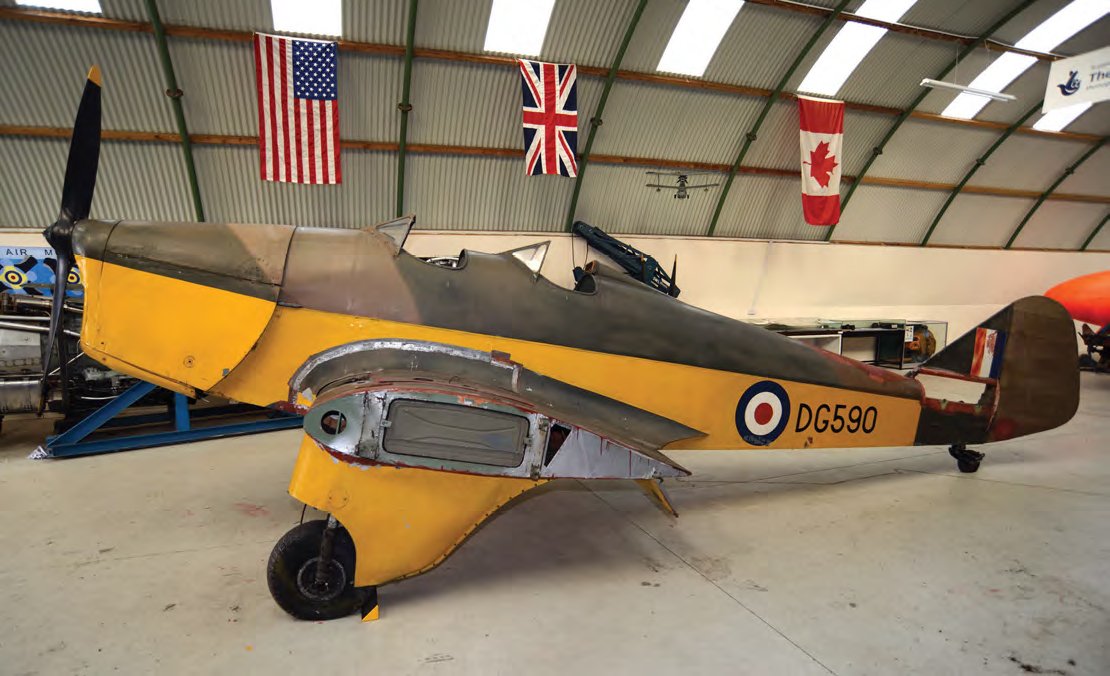 The fuselage of Miles Hawk Major DG590/G-ADM Win a Romney Hut at Montrose, on display for the first time since appearing in the static park at the Ternhill Battle of Britain display in 1964.
NEIL WERNINCK

Miles M2H Hawk Major DG590/G-ADMW departed from long-term isolation at the RAF Museum store at Stafford on 14 February for a new home at the Montrose Air Station Heritage Centre in Angus on the east coast of Scotland. One of only two survivors from 39 examples of this pretty trainer/tourer built between November 1934 and September 1935, the machine was put up for disposal by gift during April 2016, with preference given to accredited museums, following a comprehensive review of the RAFM collections.

The curator at Montrose, Dr Dan Paton, commented: “It is a real achievement for a small museum like ours, run entirely by volunteers, to be able to convince one of the largest museums in Britain that we had the capability to look after this rare aircraft and the flair to display it to the visiting public. It will go on show in our largest building as the focal point of an exhibition on training pilots, up to and during the Second World War.

“With a few modifications the Hawk Major became the Miles Magister. The type saw extensive service at Montrose and the Miles company even had its own maintenance and repair facilities at the air station. The close links between Montrose and Miles Aircraft make the Hawk a very important acquisition in telling the story of the base during the Second World War.”

Dr Paton continues: ”We will be refurbishing the aircraft ourselves. Many of our volunteers are ex-RAF/Fleet Air Arm aircraft engineers. Last year we completed the construction from scratch of a replica BE2c, the first type at Montrose in 1913.”

Originally registered to W. R. Norman at Heston on 1 August 1935, ’DMW went to the Portsmouth Aero Club during April 1939, and was impressed into the RAF with the serial DG590 in February 1941. Restored to the civil register with Miles Aircraft at Woodley in September 1946 and used by the Reading Aero Club, it was finally withdrawn from use at Sleap, Shrop shire in June 1965 and presented to the RAF Museum.

The other M2H to survive, G-ADAS (c/n 138), was on show at the TAM Museum/ Museu Asas de Um Sonho in the city of São Carlos, Brazil until it closed due to budgetary problems in January 2016. An example of the very similar M2W Hawk Trainer, G-ADWT, is owned by collector Karl-Friedemann Grimminger and kept near Munich. The M2W had enlarged cockpit openings to allow the occupants to wear parachutes, vacuum-operated flaps, and a full blind flying panel.