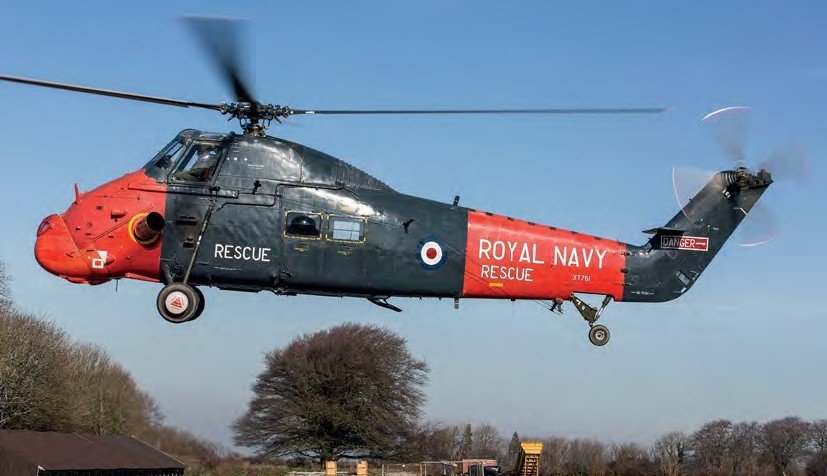 The magnificent sight of a former Royal Navy Wessex in the air at Crewkerne on 15 February as Capt Steve Daniels gets Historic Helicopters’ HU5 XT761/G-WSEX airborne, more than 30 years after the type was retired by the RN.
LEE HOWARD

This coupled de Havilland Gnome-powered machine made its maiden flight from Yeovil on 3 October 1966 in the hands of former Pathfinder Force Lancaster pilot Leo Charles Evan DeVigne DSO DFC. The following February, XT761 went to 707 Naval Air Squadron, a commando helicopter training unit at RNAS Culdrose. It entered front-line service with 848 NAS at Culdrose the following month, and in May 1967 was allocated to the Royal Fleet Auxiliary (RFA) Resource Flight, spending much of the next decade operating in the Far East with 846, 847 and 848 Squadrons. In June 1979 it became a search and rescue machine with 771 NAS at Culdrose, but during May 1982 it was allocated to 845 NAS for service on Operation ‘Corporate’ in the South Atlantic and was flown from Yeovilton in HeavyLift Shorts Belfast G-BEPS to Ascension Island, where it joined the 845 NAS Base Flight.

Returning to the UK on the RFA Oliver in November 1983, XT761 went back into an SAR scheme, making its last service flight on 6 November 1986 from Yeovilton to the Royal Naval Aircraft Yard at Wroughton where it was stored as a reserve airframe for 771 and 772 NAS. Shortly after the type’s retirement from Royal Navy service, the helicopter was taken by road to Lee-on-Solent in April 1988 to become a ground instructional airframe with the Air Engineering School, moving with the unit to nearby HMS Sultan in November 1995. During December 2008 it was earmarked — along with Wessex HU5 XT771 — for the Royal Navy Historic Flight.

In May 2013, both aircraft were roaded to Culdrose before being sold to Somerset businessman and helicopter aficionado Andrew Whitehouse, operating as Historic Helicopters. The Wessex arrived at his new, purpose-built facility near Crewkerne on 6 July 2017 for restoration. Once test-flying is completed, XT761 will join Historic Helicopters’ Whirlwind HAR10 XJ763, the world’s last airworthy example of the type, for the 2019 display season.

The last UK military examples of the Wessex were HC2 models, retired from RAF service in April 2003.