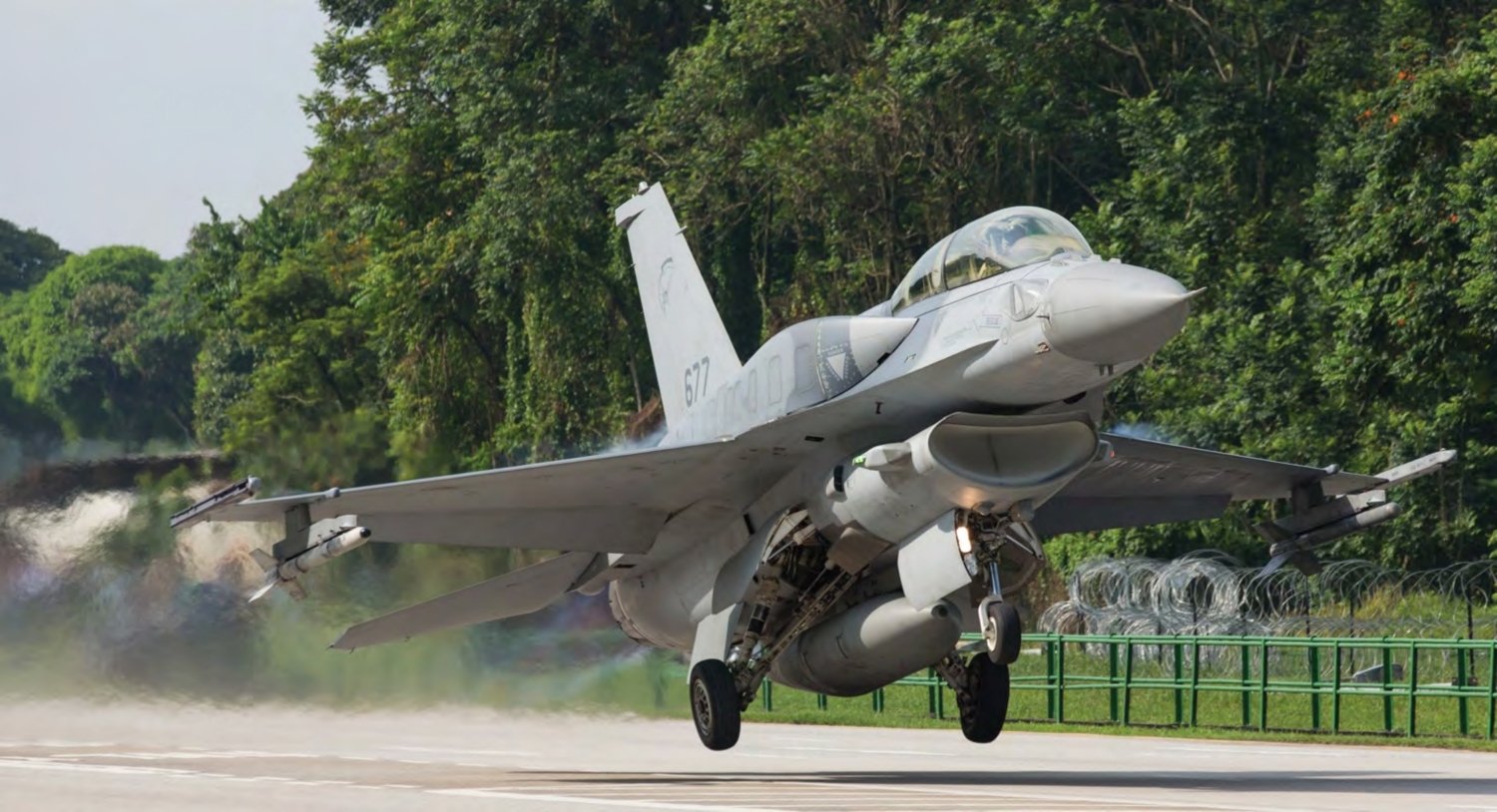 The Republic of Singapore Air Force (RSAF) held its most complex alternate runway exercise to date. Exercise Torrent 2016 was the seventh event since the first one was held in April 1986, and the first since 2008. Exercise Torrent involves conversion of the Lim Chu Kang road, a public road that runs along the length of Tengah Air Base, into an operational runway for launching and recovering RSAF fighters. Lim Chu Kang road is linked to Tengah Air Base via two gates.

Set up in 2008 solely for generating, sustaining and projecting RSAF air power, Air Power Generation Command (APGC) is the organiser of Exercise Torrent. The eightyear old command consolidated all four Republic of Singapore Air Force air bases under a single command, responsible for aircraft maintenance, preparation and operational readiness of all four bases.

Exercise Director and the Commander of APGC, Brigadier General Gan Siow Huang said: “Singapore is a small island with limited resources, so APGC aims to manage the air force as a network of air bases.”

In previous versions of Exercise Torrent, the focus of the event showcased how Tengah Air Base continued flight operations after an enemy attack by using the Lim Chu Kang road as an alternate runway. This year’s event highlighted the RSAF’s air power generation capabilities with the simultaneous launch and recovery of 12 fighters from four air strips: the main Tengah runway, the eastern and western taxiways, all within the air base, and the Lim Chu Kang road.

By using four air strips, the interval between each aircraft getting airborne was between three and ten seconds: three to four times faster than a single runway operation. 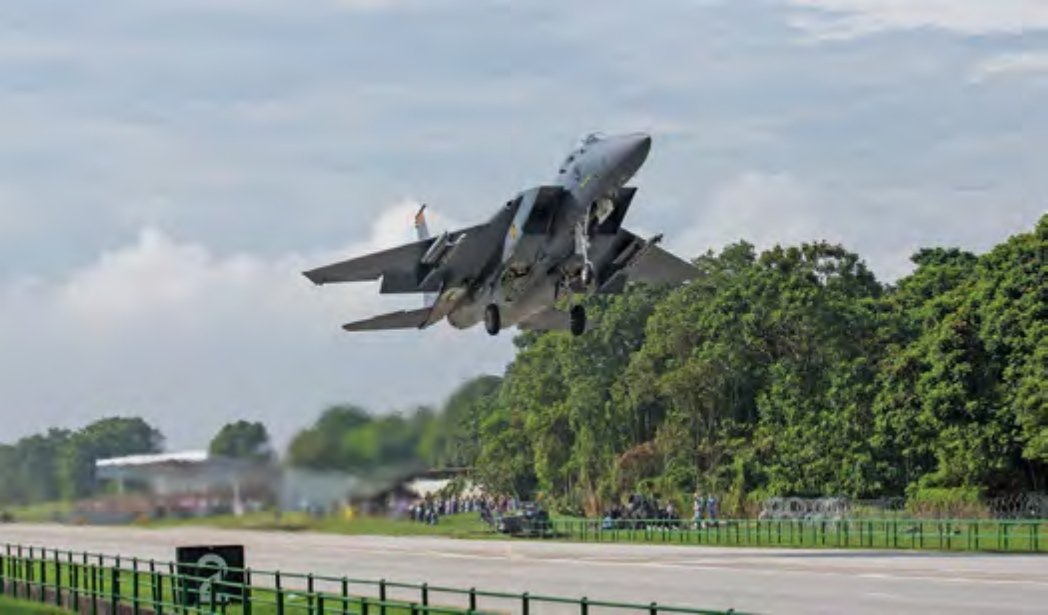 An F-15SG departs from the LCK road.

Note the removal of the conformal fuel tanks. Smoke swirls from the tyres of an F-15SG as it lands on the LCK road. Other aircraft were concurrently landing on the main runway and taxiways inside Tengah Air Base.

Brigadier General Huang said if Singapore faced threats in time of contingencies and war, it’s important that RSAF fighters can take off quickly in response to the threat: “The more aircraft we can launch within a short period of time, the more air power we can bring to defend Singapore. Similarly, if we can recover aircraft quickly, we can turn and regenerate them faster to provide continuous air power projection.”

About 1,000 personnel took part, almost half of which were reserve servicemen.

Brigadier General Huang explained how in a real operation, the RSAF is very flexible in its choice of aircraft, when to direct each fighter to a particular airstrip and in which order. She said: “Air traffic controllers have to optimise support on the ground to turnaround the aircraft quickly, based on the aircraft type and mission and the location of a shelter for their protection.”

Preparations by RSAF fighter pilots focused on take-off and landing from shorter and narrower air strips.

A F-15SG pilot and 149 Squadron’s Chief Fighter Weapons Instructor, Major Wang said: “We practise short field landing techniques on the main runway and check that everyone can perform within the perimeters.” 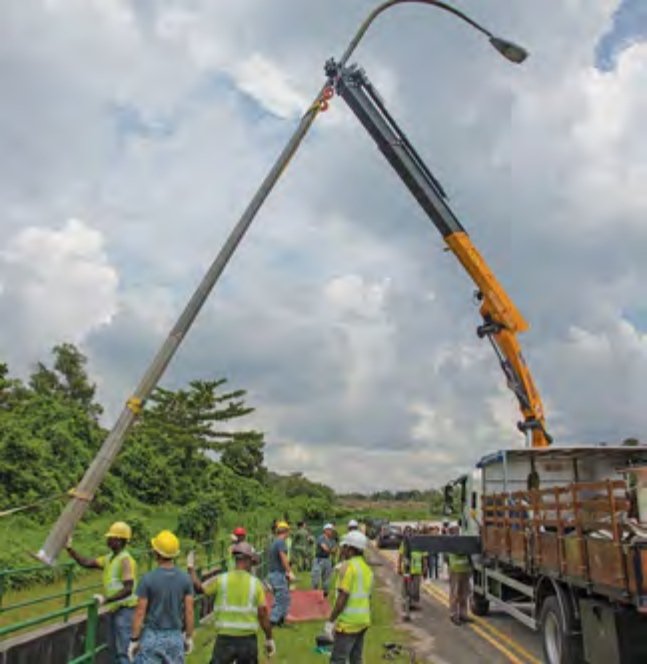 Bearing the badge of the new 142 Squadron, an F-15SG Eagle make the type’s inaugural launch in Exercise Torrent.

Internal training starts a few weeks prior to Torrent although Major Wang said the squadron has been training to operate from alternate runways since day one because the main runway might be affected by an emergency situation. He explained: “The margin of error is greatly reduced therefore we need to be more precise in our executions.”

F-16 pilot and 140 Squadron’s Commanding Officer, Lieutenant Colonel Tan Hwee Roy said: “We are used to the perspective of a normal runway. Tengah’s runway is 150 feet [45m] wide while LCK is just 80 feet [24m] wide. So the size and width of LCK when we come in for an approach is very different.”

Lt Colonel Tan’s F-16C engaged the MAG for the first time in Exercise Torrent, to simulate a brake failure and test the ability for the crew to recover the aircraft and resume landing operations.

Tan added that preparations on each of the three squadrons also included consultation with pilots who flew in Exercise Torrent in 2008 to find out the challenges they faced, part of the RSAF’s culture of knowledge sharing.

Lt Colonel Tan also said the RSAF does not usually launch aircraft in such quick succession which led to challenges ensuring sufficient de-confliction in Singapore’s dense airspace. AIR International understands the Tengah control tower controls circuit traffic within Tengah and uses the mobile air traffic control tower for the LCK. Controllers working the tower coordinate with 203 Squadron, the radar control unit, on the sequence of aircraft movements, and provide updates to the pilots on the assigned landing strip.

Explaining the strategic importance of the training provided to RSAF pilots, Defence Minister Dr Ng Eng Hen said: “The ability to launch 12 fighter jets off the Lim Chu Kang road shows we can convert a road into an airstrip, which gives us a lot of confidence we can protect our airspace under all conditions.” 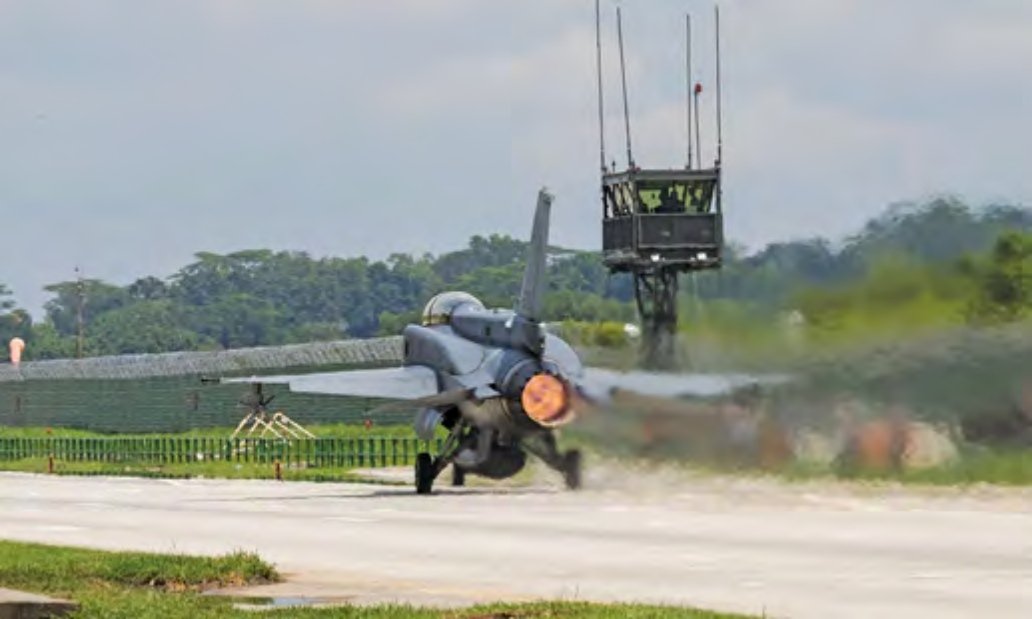 A Block 52+ F-16D takes off with the Mobile Air Traffic Control Tower in the background.