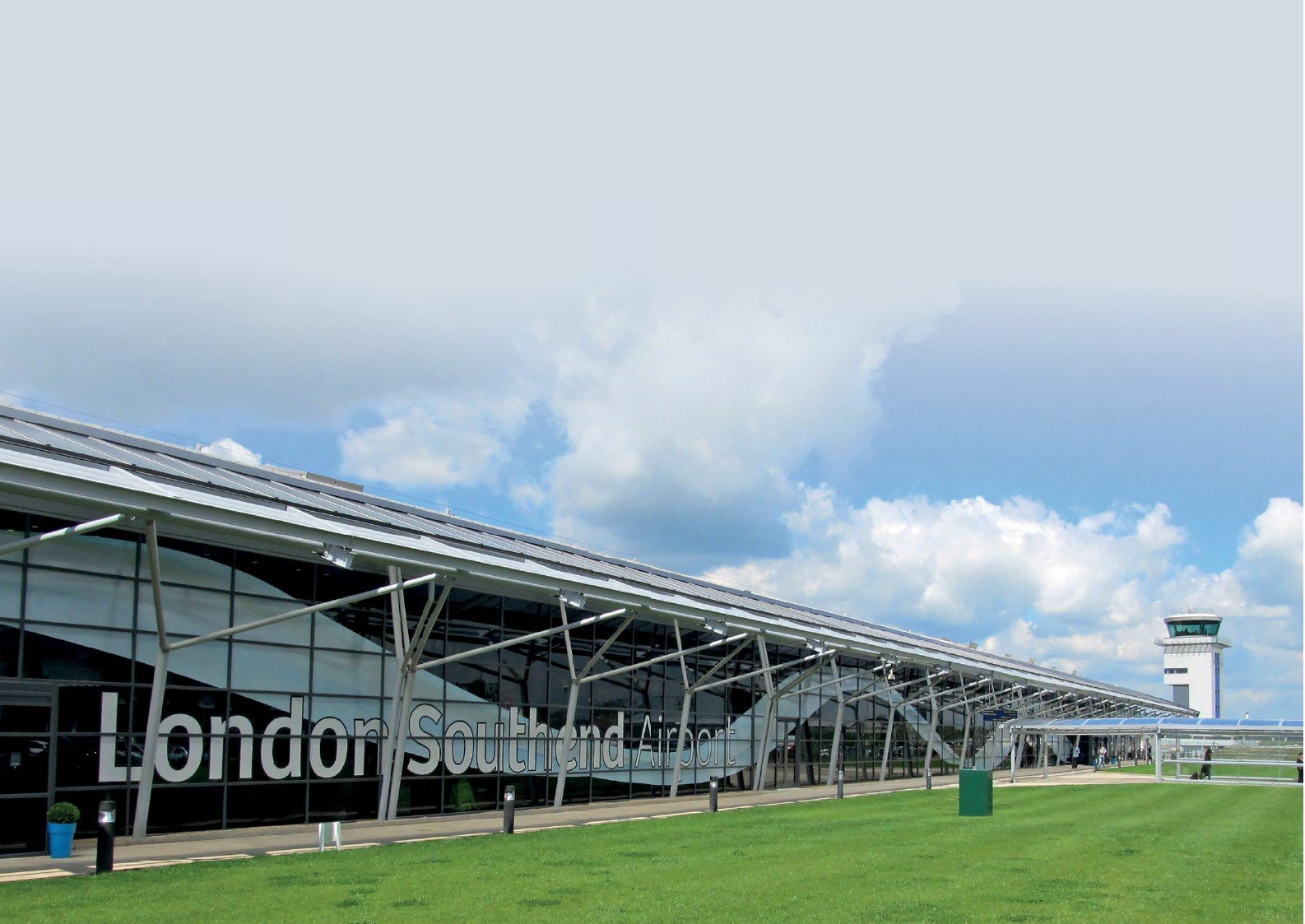 London Southend Airport (LSA), situated 45 miles (72km) from the centre of London, is the fastest growing airport in the UK for the second year running.

Glynn Jones, the Chief Executive Officer of Stobart Aviation, the owners of LSA, said he is, “absolutely delighted with the passenger figure”. Jones added LSA is on course for 2.5 million passengers this year after Ryanair started its services in April 2019, with expectations the number will reach five million by 2023.

In January 2019, the airport celebrated the tenth anniversary of the Stobart Group buying the airport from Southend Council for £21 million. Since then, Stobart has completely redeveloped LSA with a major £160 million programme, turning it into an international airport by constructing a new terminal building, control tower, railway station and hotel, and extending the runway by 984ft (300m).

Southend Airport has a rich 100-year history. It was at one point in the 1960s the third busiest airport in the UK, with Channel Airways passenger flights to Europe and British United Air Ferries cross-channel car ferry services using ATL-98 Carvairs. As other airports developed, Southend declined and became more of a general aviation airfield, rather than an airport. Jones said: “When [Stobart Group] took over the airport in 2008 it was only handling 47,500 passengers a year and now it is handling more than 1.5 million.”

The first major airline to set up a base at LSA when the new terminal building opened in 2012 was easyJet, which had signed an initial ten-year agreement the previous year. The carrier based three Airbus aircraft at the airport to operate scheduled services to European destinations in 2012. Due to the success of these routes, a fourth aircraft and new routes were added.

EasyJet went on to break the passenger numbers record for a flight from Southend in March 2014 with a flight to Faro with 177 passengers aboard an A320, beating the previous record of 170 passengers set by a British Air Ferries CL44 on a flight to Ostend in 1972.

Jones said: “The airport has the theoretical capacity for up to five million passengers a year, and with Heathrow and Gatwick continuing to struggle with a capacity crisis Southend is the answer.”

The low-cost giants easyJet and Ryanair are far from the only new commercial operators at Southend. Air Malta started flights to Malta, Cagliari and Catania in 2018 and Flyone operates to Chisinau in Moldova.

Loganair started three new daily services from Southend to Scotland on May 12, 2019, to Aberdeen, Glasgow, Stornoway (the first ever London to Stornoway flight) and Carlisle. The carrier operates 17 weekly flights to Aberdeen, 15 to Glasgow, six to Stornoway (via Glasgow) and four to Carlisle. The latter route, launched on July 4, 2019, using Saab 340s, was due to begin last year but was delayed due to operational reasons at Carlisle.

In October 2019, Loganair switched its flights from London to the City of Derry (a route the carrier took over after the demise of Flybmi earlier this year) from Stansted to LSA. Loganair will operate 26 flights a week (13 return flights) using 49-seat Embraer 145 aircraft. The route has been made possible through government Public Service Obligation funding to maintain the route.

Another new operator is Blue Islands, which started a daily service from Guernsey to Southend from May 20, 2019 using ATR 72s. An advanced pre-launch publicity charter flight was operated on March 15 with newly delivered ATR 72-500 G-ISLN (msn 884). The services are part of the franchise arrangement with Flybe. 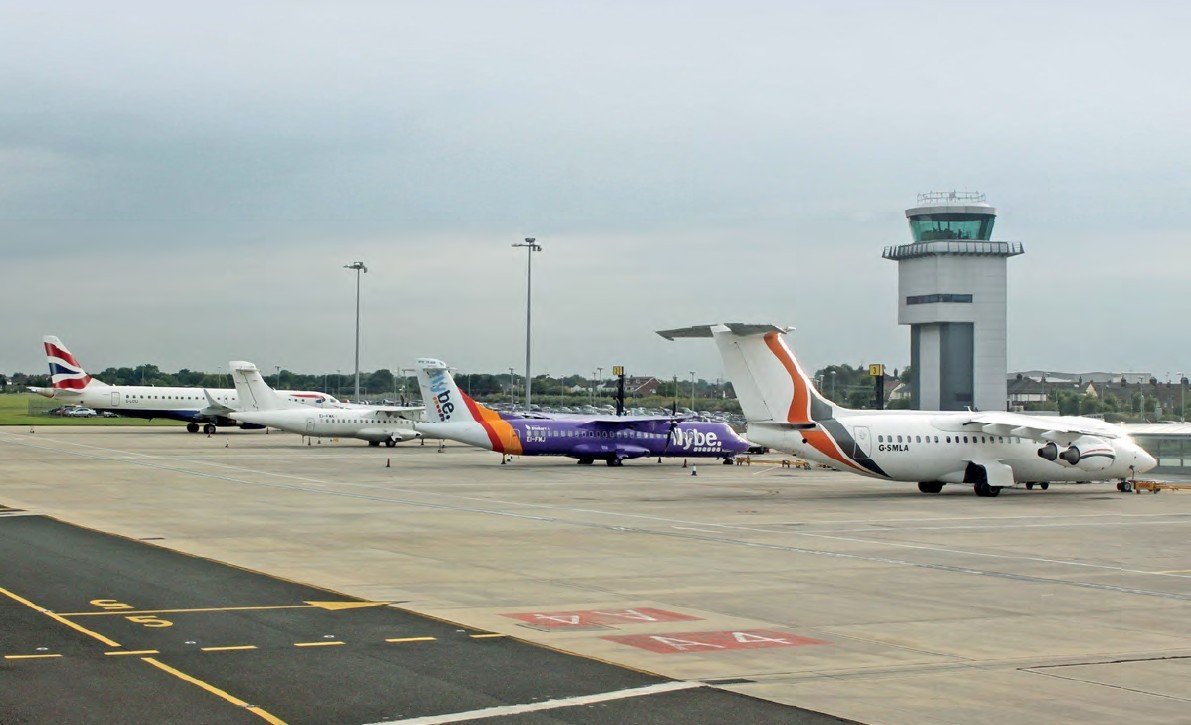 The Stobart Group is planning to invest a further £40 million in LSA through to 2021. This year £10 million was spent on resurfacing and grooving the runway to improve the braking efficiency for larger aircraft with full passenger loads, such as the Ryanair 737-800s, to enable them to operate from the airport.

Lagan Airport Maintenance was appointed to carry out the essential maintenance project to upgrade the durability and performance of the runway by removing 50mm (1.9in) of the existing surface and replacing it with 200mm (7.8in) overlay of grooved Marshall asphalt by using an onsite batching plant.

Other works included friction testing, airfield lighting and white lining. The work was carried out at night between January and April 2019 to minimise disruption to services.

The runway improvements followed work during 2017 on the apron, taxiways and parking stands. The apron and taxiways were all completely dug up and relaid, and six new stands were added to bring the total for passenger airliners near the new terminal building to 16.

The airport now has ten stands in front of the new terminal, five in front of the Jet Centre on the south apron and six on the north apron that could be used for overflow of commercial airliners at busy times with passengers being dropped off at the terminal first and the aircraft then being towed to the other stands. 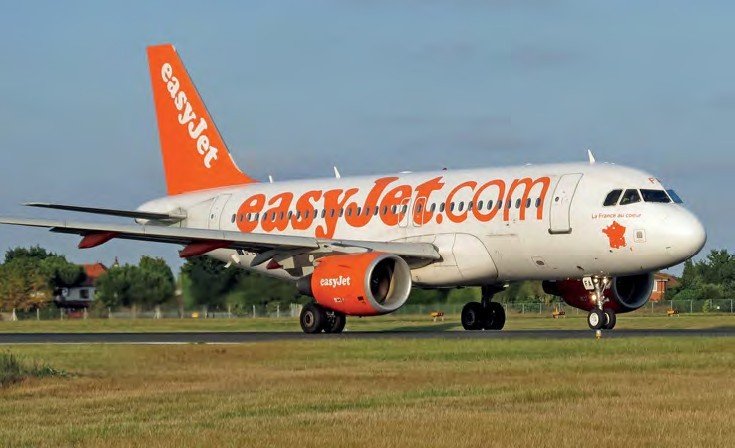 EasyJet started flights from Southend in 2012 and has steadily grown its network from the Essex airport.

LSA now has a solar power panel energy farm, reputedly the largest at any airport in the world, and has become entirely self-sufficient in generating electricity to power all its needs. The airport recycles all its rainwater from the terminal buildings and uses it to flush the toilets, with the water collected in an underground tank.

A £5 million ten-year franchise deal with The Restaurant Group also saw a Giraffe Stop and Costa Coffee open to complement the existing coffee outlets, along with the Navigator Bar and Restaurant, which replaces the original Lakers Bar and Restaurant.

Jones commented: “We have been voted best airport in the London area for six years now in the Which? magazine consumer survey and a key part of our mission is to deliver a great experience for our guests and food and beverage offer the main way we can make their experience even better.” 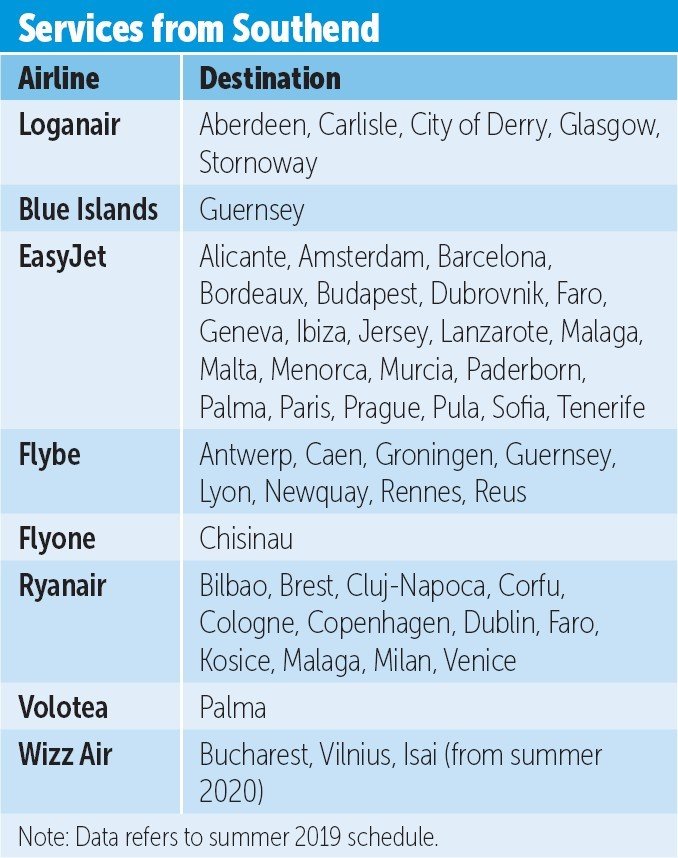 There are currently no aircraft maintenance facilities for large airliners at Southend, following the collapse of ATC Lasham in 2016 and Inflite Engineering closing its maintenance base at Southend as part of company restructuring moving operations to Stansted.

Air Livery continues to thrive and has been repainting most of the easyJet Airbus fleet into the airline’s new colour scheme. Its existing hangar was destroyed by a fire in 2017 and a new, much larger ‘super hangar’ is currently under construction. This should open by the end of the year and will enable larger aircraft to be painted. In the meantime, Air Livery has been using a spare hangar at the airport for painting work.

JOTA Aviation, an ACMI charter operator based at the airport, continues to expand, with two BAe 146 and one RJ.100 passenger aircraft for leasing contracts to other airlines when required. The company has also launched JOTA Cargo to operate cargo flights using four BAe 146QT freighters bought from ASL Airlines of Spain. The first BAe 146QT with JOTA Cargo titles, G-JOTE (c/n 3182), entered service at the end of July 2018.

A new Stobart Jet Centre for business jets was set up by the Stobart Group and opened in summer 2018. It is already proving a success and attracting flights and customers from all over the world, because Southend is open 24/7 while quotas have been imposed on business jet movements at Luton and Stansted. The facility was particularly busy during the 2018 World Cup football tournament with lots of bizjets flying to and from Russia. Stobart hopes to handle around 2,500 business jets a year.

JOTA Aviation is an ACMI specialist based at Southend, with ex-PSA, US Air and CityJet BAe 146-200 G-SMLA (c/n E2047) used for charter flights.

Further expansion at Southend is coming from another low-cost operator, Wizz Air, which started flights from Southend to Bucharest, Vilnius and Sibiu in October 2019 using A320s and A321s.

Warwick Brady, Chief Executive Officer of Stobart Group, said: “The agreement with Wizz Air is another significant milestone in the development of the UK’s fastest-growing airport. The partnership increases the domestic and European destinations we can offer customers to more than 40 by adding exciting and increasingly popular destinations in central and Eastern Europe.”

To celebrate the tenth anniversary of Stobart Group ownership of LSA, a special exhibition has been put up in the terminal along with a Second World War memorial plaque, proudly displayed landside in the new terminal in memory of those pilots who lost their lives operating from RAF Rochford.

With the Ryanair agreement and now Wizz Air joining the other airlines, things are looking good for the foreseeable future at LSA. The airport is on track to become London’s new fifth, if not fourth, busiest airport, potentially overtaking London City. It is all very different to the relatively quiet operations of just a few years ago.

Jones said: “The Stobart Group has ambitious plans to ensure the growth and success of the airport, including plans to extend the baggage areas in the new terminal building, making it 75% bigger, resurfacing the runway and grooving it to enable slightly larger aircraft such as the 737- 800. A new hotel is also part of the plans for the next decade.”