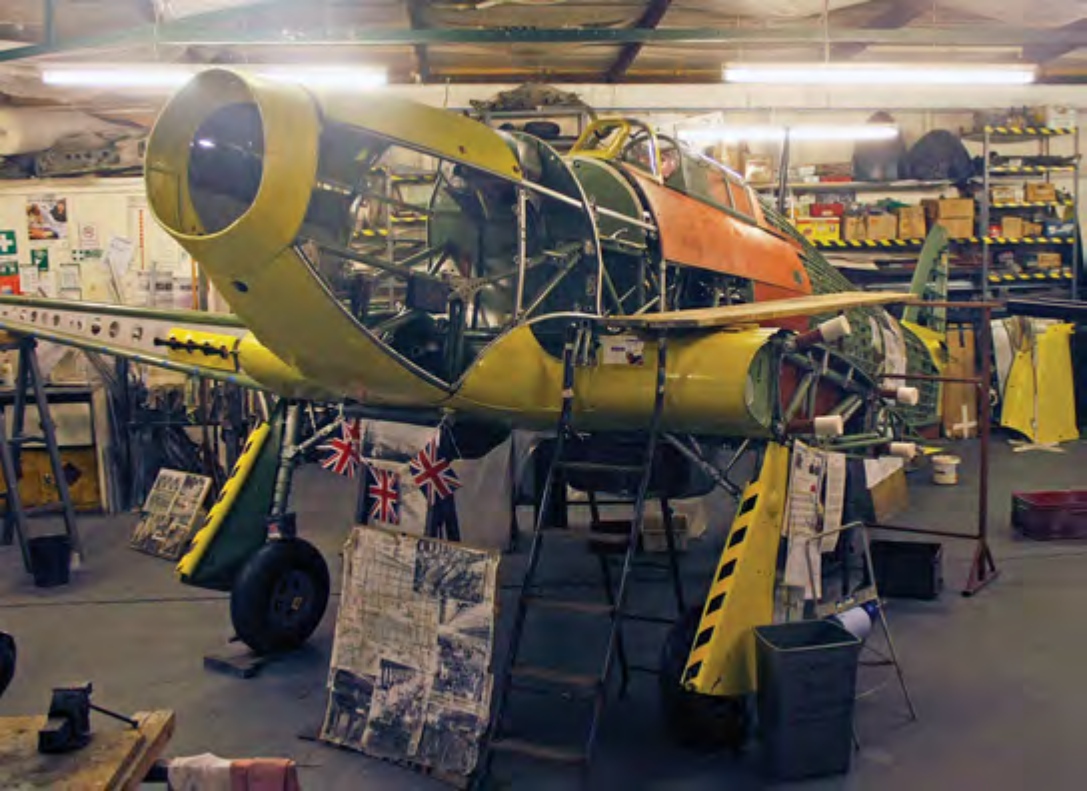 The impressive bulk of Hurricane I L1639 is apparent in this view, taken in the workshop at Little Gransden.
TONY HARMSWORTH

At Little Gransden airfield near St Neots, the Cambridge Bomber and Fighter Society is making good progress on restoring Battle of France veteran Hawker Hurricane I L1639 to taxiable condition. The fighter was the 93rd Hurricane built by Hawker at Brooklands, and was recovered from a crash site near Abbeville, France during 1999, almost 60 years after being shot down by a Messerschmitt Bf 109E.

Paul Rogers, director of the society says: “We have recently finished the rudder, and the early windscreen and metal surround is in position ready to be fixed into place. All the control wires are finished along with the turnbuckles. The engine cowlings are progressing and should be completed this year, and the panels under the radiator are completed and have been painted in the original black/white scheme. The elevators are nearly finished, and the recent work has included the shear plates for the wings.”

The fighter, which is being built with reference to original engineering drawings, is one of only two surviving Hurricanes fitted with fabric-covered wings. The other is MkI L1592, displayed in the Science Museum in Kensington.

It is estimated that about 20 per cent of the completed airframe will come from L1639. Components from several other Hurricanes are being incorporated into the aeroplane, including MkI Z4035, which is providing much of the cockpit, and MkIIBs BD731 and BD736, recovered from crash sites in northern Russia.

The Merlin II engine has been built up using parts from seven units, and is in running condition. When originally delivered to No 85 Squadron, RAF at Debden on 30 August 1939, L1639 was fitted with a Watts two bladed wooden propeller, an example of which has been sourced and will be fitted to the completed machine. During the spring of 1940, L1639 was fitted with a three-bladed, variable-pitch Rotol propeller, and in May it went to France with No 504 Squadron. On 14 May, while being operated from Lille/Marcq airfield, L1639 was one of three Hurricanes shot down by Bf 109s from II./JG 26 while attacking a group of of Heinkel He 111s.

The aircraft will be finished in the markings it wore while being operated by No 85 Squadron as part of the British Expeditionary Force in France between September 1939 and March 1940, with the code letters VY-Q. Team leader Paul Rogers is looking for further volunteers who would like to get actively involved in the restoration of this historic machine. For further details, e-mail Paul at prr20@cam.ac.uk or call 01487 842897.