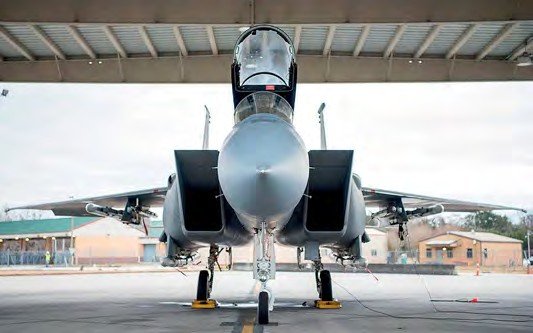 Boeing announced on February 6 that it had started trials of conformal fuel tanks (CFTs) fitted with additional weapons pylons on a United States Air Force Air National Guard F-15C Eagle fighter. A 2017 programmed dubbed ‘F-15 Persistent Air Dominance Enabler’ examined improving the fleet of 105 combat-coded Air National Guard F-15Cs that may have to remain in service until 2040 or longer.

The image released by Boeing shows F-15C 85-0102 from the 159th Fighter Wing, Louisiana Air National Guard fitted with two rails, one above the other, mounted on each CFT with the upper set on each side carrying two missiles, one behind the other.

A CFT-equipped F-15C will also be able to carry four missiles on each multi-rail missile launcher (MMRA) attached to the wing pylons usually loaded with a drop tank on a non-CFT-equipped jet.

CFTs have been fitted to US Air Force F-15 Eagles in the past, most notably to aircraft assigned to the 57th Fighter Interceptor Squadron based at Naval Air Station Keflavik, Iceland in the 1980s. However, although they are standard on US Air Force F-15E Strike Eagles and some export models, the last time F-15Cs carried CFTs was at Keflavik. The need to increase the type’s weapons loadout is driven by advances in the weapon payload of potential adversary aircraft such as the Su-35S Flanker E. The F-15 Persistent Air Dominance Enabler document also states:

“Standardised weapons communication terminals in advanced CFTs will also help streamline weapons development and integration among all versions of the F-15, and allow combatant commanders to quickly exploit the advantages of a common fleet when all aircraft… can readily accommodate advanced weapons or off-the-shelf defensive countermeasure upgrades.” The total cost of 105 CFT kits and 210 MMRAs is quoted in the document as $441 million.