The US Department of Defense has finally secured funding for an initial batch of F-15EX Advanced Eagles from Boeing, but what does this fighter procurement mean for the US Air Force? Jamie Hunter evaluates the new strategy. 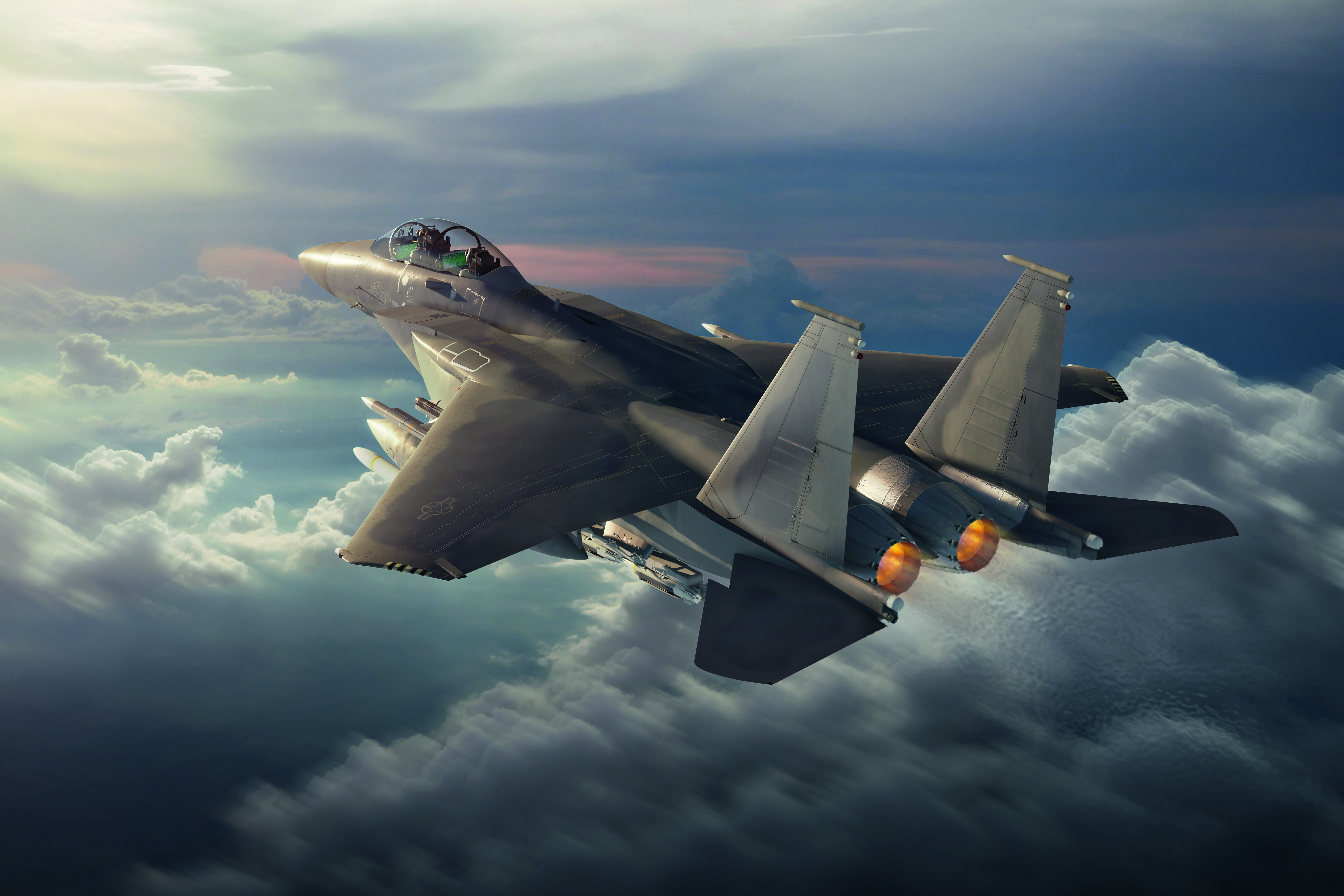 General Electric engines will power the F-15EX, a first for USAF Eagles.
Boeing

As far back as 2017, the US Air Force started making overtures that it might consider buying a new fighter that wasn’t a stealthy fifth-generation aircraft. It broke a mould that was cast by Gen Michael ‘Buzz’ Moseley over a decade before when he was chief of the USAF. Moseley insisted that the USAF was only intent on procuring stealthy fighters and had zero interest in any proposals for new F-15s from Boeing.

Nevertheless, times have changed, and the USAF is faced with an unforeseen problem. For a start, the service only received 187 F-22 Raptors – a fighter that was designed to replace the F-15C Eagle wholesale. Moreover, the F-35 is late and not in production in the numbers that were expected by 2020. A comprehensive upgrade plan to take the F-15C out to 2040 was evaluated but deemed to be far too expensive. Blend all of this together, and the only realistic solution was to buy some new Eagles from Boeing of its production line in St Louis, Missouri.

Fast-forward to December 19, 2019, and the signing of the Fiscal Year 2020 National Defense Authorization Act (NDAA) and the Department of Defense Appropriations Act bills by President Trump. This provided US$1bn in funding to acquire a total of eight F-15EX fighters for the USAF. It transferred funds associated with purchasing two test aircraft from the procurement budget for research, development, test and evaluation. However, the budget came with caveats. The Appropriations Act stipulated that the service can only procure two F-15EX prototypes plus long-lead items associated with the remaining six fighters until a report detailing its acquisition, test and evaluation, logistics, and post-production fielding strategies – along with cost and schedule estimates – has been submitted to a congressional defence committee.

The development followed deadlock in Washington over the sign-of of the 2020 budget. Prat Kumar, Boeing’s vice-president and programme manager for F-15, said in December: “We are capable of delivering two jets by the end of 2020 assuming a timely contract award. He added that Boeing was making investments to protect its ability to deliver the first F-15EX “by the end of 2020” on that basis.

The budget also allocated $7.86bn over the five-year future spending plan to acquire as many as 80 new Eagles, which will be used to directly replace the USAF’s oldest F-15Cs.

The cockpit features the new 11in x 19in large-area display.
Boeing

The USAF’s fighter aircraft fleet faces huge challenges, with an average age of 29 years across the mission designation series (MDS). Future USAF fighter needs were planned to be absorbed by the F-35 Lightning II, however, Lockheed Martin is way behind where it expected to be in terms of production rates, with initial operational test and evaluation still incomplete. The USAF was stuck with a conundrum of how to be ready for a high-end fight, while wrestling with the problem of how to supplement its small Raptor fleet. Initially, the plan fell on the 1970s-era F-15Cs to supplement the F-22s, while in the background various plans for the Eagles ranged from complete retirement to a major upgrade.

The problem facing the F-15C was extremely complex and included both structural and capability concerns that urgently needed to be addressed. Initiatives were launched to re-wing the oldest Eagles, replace fatigued forwardfuselage longerons in some examples, and refresh the avionics and outdated self-protection systems. Boeing started talking about the F-15 2040C, which was to migrate new technology from its Advanced F-15 into the old USAF airframes. However, when the FY 2018 budget request deleted the Eagle Passive/Active Warning Survivability System (EPAWSS) for 196 F-15Cs it was clear that any Eagle upgrades were on hold. The plan to comprehensively upgrade the F-15C was simply too expensive and the airframes were too far gone.

USAF chief of staff Gen David Goldfein said in 2019: “Our future is invested in fifth-generation, in the F-35, but as chief of staff of the USAF here’s a challenge I face, which is a near-term challenge. When we stopped [producing] the F-22, the plan was to put that money into an accelerated plan for the F-35. If that plan had been executed at the time we cancelled the F-22, I should have had 1,100 F-35s on the ramp today. I have less than 300. So I’ve got four fourth-generation [aircraft types] that are part of the inventory that I’ve got to maintain into the 2030s to keep the capacity I need to be able to meet combatant commander requirements. One’s not going to make it and that’s the F-15C. It’s too old and I’m not going to be able to fly it for many more years.” Goldfein said that maintaining the F-15C had become too expensive and unpredictable, adding: “I have zero interest in another modification of the F-15C.

“We used the best cost estimates that we had and looked at the various options. The most affordable options, as long as we keep the F-35 on track with our programme of record, was to look at an F-15 variant to replace the F-15C.” 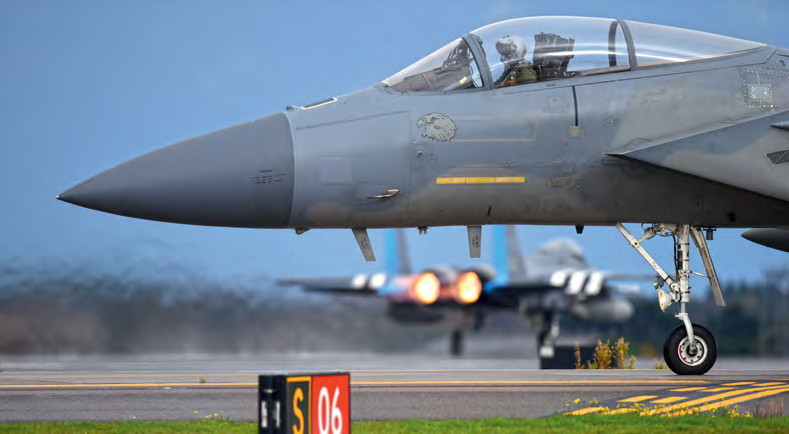 While the USAF says F-15C recapitalisation will not impact its overall F-35 plan, most agree that the 1,763 F-35As that the USAF wants will inevitably be reduced in number.
USAF/A1C Madeline Herzog

The USAF had to find a way to be able to meet its near-term capacity challenge. Goldfein explained: “The only option that was available [and] that was an affordable option was to leverage the hot line that currently exists – that has investment from both Saudi Arabia and Qatar – that allows me to put an F-15EX in the same hangar, use the same support equipment, have a local checkout for both maintainers and operators and do it on a timeline that [means] I can maintain the capacity I need. So the F-15EX is to solve only one challenge I have and that is that the F-15Cs are not going to continue flying and I have to have that capacity. I’m not willing to put a nickel of F-35 money into the F-15EX – this is not a trade, this is capacity I need to fulfil a shortfall that’s staring me in the face.”

The beauty of the F-15EX is that it is almost immediately ready to roll off the active production line in St Louis, with a few of the USAF F-15E’s latest modernisation elements sprinkled in. This is about cost avoidance by leveraging existing spares chains and support equipment. It’s also about ease of transition, not taking a squadron offline for an 18- to 30-month re-equipping and training phase. F-15EX is also about keeping Boeing in the fighter business; the USAF’s acquisition chief Dr Will Roper is making no secret of his concerns that the industry is in danger of being reduced to a single manufacturer capable of completing such work.

Goldfein has been very clear to highlight that F-15EX in no way impacts the USAF’s F-35A plans: “Let me tell you what [F-15EX] is not. It’s not in any way, shape or form in competition with the F-35. The F-15EX, or any fourth-generation airplane, isn’t an F-35 – it’s not even close and it never will be. The difference between fourth- and fifth-generation is not the platform, it’s the fusion of information that allows the pilot of an F-35 to see and understand the operational environment in a way that no other platform can do it. It’s why I call them the ‘quarterback’ of the penetrating joint and allied teams.” 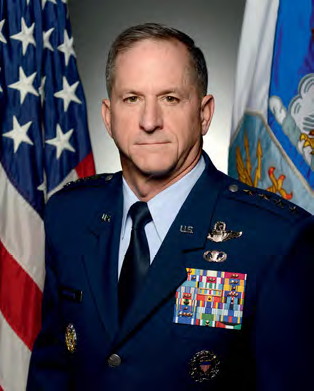 While some argue that stealth will be rendered obsolete in the coming years by emerging sensor technology, blending low-observable configurations with advanced electronic warfare suites presents the most robust solution to fighting in dense anti-access operating environments. European aerospace companies have championed so-called ‘digital stealth’ as a solution to provide a scalable and agile means of self-protection in the electromagnetic spectrum. One of the first tasks allocated to the two F-15EX prototypes will be to join the USAF’s EPAWSS flight test ef ort. This advanced system will be the only major dif erence for the F-15EX over existing Advanced F-15s and the system is seen as a critical self-protection cloak for both the F-15EX and existing USAF Strike Eagles, which many feel are currently ‘out of the fight’ in high-end scenarios.

Plans call for the initial two USAF jets to be provided on a fast track by the end of 2020, with all eight F-15EXs delivered by the end of 2022, subject to the mandated reports to congressional defence committees. The balance of six aircraft will then support tactics development with the USAF Weapons School at Nellis AFB, Nevada. Ultimately, the USAF could procure as many as 144 of the new Eagles.

The F-15EX is broadly similar to the F-15QA for Qatar. Boeing says it will deliver the first of these shortly, as well as the last of 84 F-15SA aircraft for the Royal Saudi Air Force during 2020. Qatar has 36 Eagles on order that should all be handed over by 2023. It also holds options on a further 36 aircraft, which would push production out to 2026 if exercised. 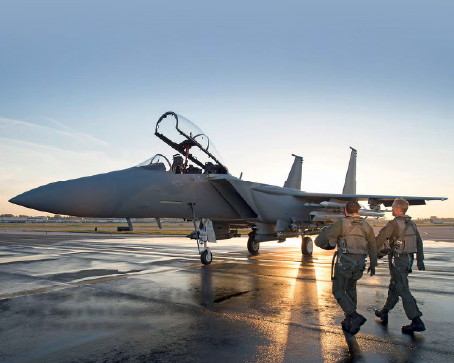 The F-15EX will be a plug-andplay replacement for the F-15C, designed to have minimum impact on the pilot training pipeline.
Boeing

It will be a two-seat aircraft (aligned with the Advanced F-15) and will be powered by the same General Electric F110-GE-129 Improved Performance Engines. It will feature the same largearea cockpit displays as debuted in the F-15QA and the digital Joint Helmet Mounted Cueing System (JHMCS). It will also feature the Advanced Missile and Bomb Ejection Rack (AMBER) to enable carriage of a wide range of air-to-air and air-to-ground armament, should both types be required.

While Boeing has talked of a spin-of single-seat F-15CX, the USAF has only shown public interest in the two-seat ’EX, indeed, it has said that F-15C units receiving F-15EXs will operate them with the rear seat unoccupied. Porting the Advanced F-15 into a single-seat ’CX would require some sort of re-certification of the complex fly-by-wire system, and despite the two aircraft retaining the same overall dimensions, any risk incurred from new testing may prove unacceptable. Because part of the foreign investment in the new displays and system management, everything can be run from the front seat of the ’EX – the missionised rear cockpit can be optionally occupied by a weapons systems of icer. The F-15EX is the preferred out-of-the-box solution, minimising the training burden for an already overstretched system that is trying to improve pilot production and retention. Transitioning an F-15C pilot to an F-15EX will be very straightforward – for example, Boeing uses USAF pilots to deliver new Advanced F-15s as they come of the St Louis line.

The F-15EX will directly replace F-15Cs in both the active-duty and Air National Guard squadrons, although exact plans are still to be released. While this acquisition is about recapitalisation of the F-15C, and while many argue that the F-15EX is ill suited to operating in the future battlespace, it does herald some capability advances. The new Eagles are well placed to complement the USAF’s large fifth-generation fleet as a weapons ‘truck’ that could easily accommodate the kind of large hypersonic weapons that are in development, but may not be able to fit inside a fifth-gen fighter’s weapons bay. It will also be able to carry a wide range of armament, all cleared from day one, and enable a versatile development roadmap. The alternative would be the USAF being forced to develop specific solutions as new, previously unforeseen, requirements emerge.