Mark Ayton learns about the F-22 Raptor with the 1st Fighter Wing at Langley Air Force Base, Virginia

Watching an F-22 pilot work through his pre-flight checks at Langley Air Force Base, one gets an appreciation of how the fifthgeneration superfighter looks up close and the sound of the two Pratt & Whitney F119 turbofan engines when running. Valued at $143 million and with the appearance of a fighting machine created for a farfetched Hollywood film, the F-22 looks every bit the superfighter that provides America with a capability advantage currently unmatched by any potential aggressor. Often dubbed the silver bullet, the F-22 Raptors serving with four US Air Force fighter wings were all born and raised in Cobb County, Georgia: more specifically at Air Force Plant No.6, the huge aircraft production facility at Marietta run by Lockheed Martin. Perhaps more famous for its C-130 Hercules assembly line which has been in constant production for 63 years, the last F-22 Raptor, serial number 10-4195, rolled out of the Marietta facility on December 13, 2011.

Many of the Block 30 and Block 35 F-22s built in the final production lot are assigned to the 1st and 192nd Fighter Wings based at Langley. The 192nd is an associate unit from Virginia’s Air National Guard.

Col Pete Fesler was the 1st Fighter Wing Commander until late June. An experienced F-15C Eagle and F-22 command pilot, Col Fesler has over 2,100 hours of flight time in his log book.

Speaking with AIR International at Langley, Col Fesler provided some insight to F-22 operations at the base.

Langley-based F-22s flown by the 27th Fighter Squadron were the first to see combat in the autumn of 2014 at the beginning of Operation Inherent Resolve and F-22s have been deployed in support of this campaign ever since. Langley’s latest rotation to the Middle East ended in October, when 12 aircraft returned to Langley via RAF Lakenheath in the UK. During the six-month deployment, the F-22s continued to participate in the coalition air off ensive against ISIS in Iraq and Syria undertaking a mix of deliberate pre-planned strikes and dynamic targeting strikes using 1,000lb GBU-32 JDAMs and 250lb GBU-39s.

According to Col Fesler, the unique capability of the F-22 makes it ideally suited for the quarterback mission: “We are frequently involved in large strike packages helping other aircraft work through the threats.” 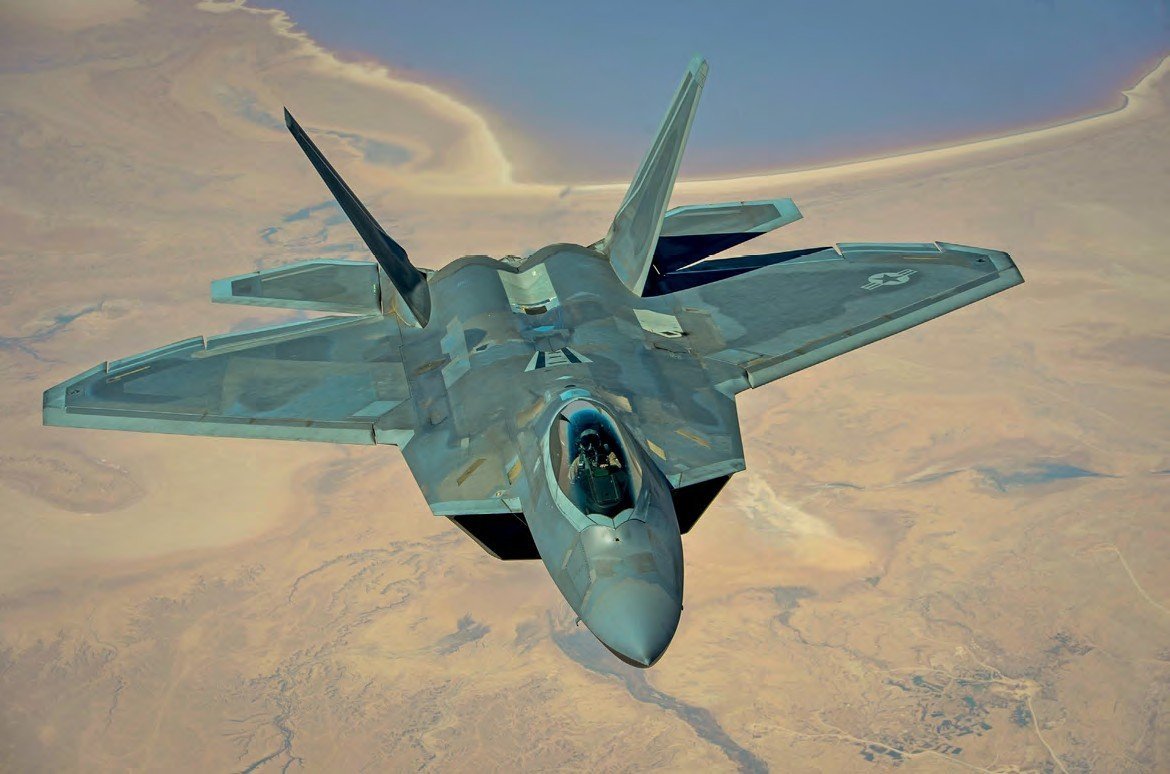 Combat operations over Syria present all coalition pilots with a unique situation: they are involved in a civil war, against a portion of the counter-regime forces; the Syrian Air Force remains active; the integrated air defence system is still functional; and Russian aircraft are also flying combat operations. That means a lot of different assets flying around, which requires a lot of coordination between the entities present there.

According to Col Fesler, the F-22s are there to keep an eye on all of the different players involved in an environment probably unlike anything the United States has undertaken before: “There is a high degree of complexity and some uncertainty, but the thing I like to highlight is the training we do in the F-22 community, which is to the most challenging set of circumstances in the high-end fight, something we’ve never really backed off from. It gives our pilots a surplus of capacity, so when they are in a complex environment, even though it’s not the high-end threat we train against, they have the capacity to work through the challenges an uncertainty and still perform well.”

The most recent capability upgrade fielded on the F-22 was the AIM-9X Sidewinder air-to-air missile, which Col Fesler said was not difficult to pick-up: “The way AIM-9X is integrated into the aircraft is fairly intuitive. The AIM-9X has a different engagement zone and different functionality, but the procedures used to employ the missile in combat are not all that different from the earlier version of the Sidewinder. It’s an IR-seeking missile with much greater capability. Ground mapping [radar mode] and the GBU-39 were both significant capability upgrades and required changes to our training battle rhythm.”

The GBU-39/B SDB I is a 250lb-class, autonomous, conventional, air-to-ground, precision glide weapon able to strike fixed targets from stand-off range. The GBU- 39/B has a multipurpose penetrating and blast fragmentation warhead coupled with a cockpit-selectable electronic fuse and a proximity sensor for height of burst capability. Four GBU-39s are carried on a BRU-61/A four-piece pneumatic carriage system in each weapon bay.

Col Fesler said: “Throughout 2017, we have followed a relatively stable training plan focusing on everything from basic handling characteristics and 1 v 1 within visual range manoeuvring to large force exercises, including Red Flag at Nellis.”

Flying and fighting the Raptor

Discussing what the F-22 is like to operate and how it handles, Col Fesler started by comparing what was required in the F-15C Eagle: “When I started, the F-15 I had 15 minutes of programming, turning on systems and running built-in tests on each avionics system in the cockpit. I had to select each one and take particular steps to make sure the system was working. From engine start to when I taxied, all of that time involved selecting a system to program. Even while taxiing, I would still be doing more of that which taxes your mind before you’ve even got going.

“In the F-22, I start it and the aircraft is by and large testing all of its systems by itself. I push one button to test the flight controls and let them go, I wait for everything to power up, I load data programmed on to a data transfer cartridge that runs everything, so then I’m in the margins of, how would I prefer my displays to look for me today? What do I want the displays to look like? I might prefer one particular display to be shown in a certain manner, and choose to place one display on the left and another on the right to suit my habit patterns for the way I prefer to process information.

“Most of what I do in that 15-minute window is waiting for the jet to time in and make some small adjustments to how I prefer to see things. The workload is much lower.

“Here at Langley, on the way out we typically stop at the end of the runway to allow a crew to look over the aircraft one final time before we launch. That’s not as necessity for the aeroplane and the crew does not have to pull pins from the jet before launch to arm. In many locations, we roll straight out of the chocks to the runway on take-off.

“The amount of power in this aeroplane is incredible. We do not do afterburner takeoffs because there is no reason to, even with 8,000lb [3,630kg] of external fuel carried in drop tanks, there is just no need to.

“It’s very nimble on the controls. You barely touch the stick to make adjustments. Like most fighters, you do not have to hand fist it around; you just touch the stick and the aeroplane roles using minor adjustments to change it.

Discussing the control of the Raptor, Col Fesler said: “What’s unique about the F-22 is that anywhere in its performance envelope the pilot is not commanding a particular flight control surface to move, but commanding a particular behaviour out of the aeroplane. Computers figure out what flight control surfaces to move, so moving the stick side to side does not automatically generate ailerons moving opposite each other. It might be rudders that move or a combination of stabs and leading-edge flaps. It depends on what environment the aeroplane is in at the time.

“The F-15 was a smooth aeroplane and very nimble on the controls, but when I put G on the F-15 it would shake, buffet and talk to you. It told you where you were in the flight envelope based on what it sounded and felt like. The F-22 is also very smooth, and it talks to you a little bit, but not much. Think of the vibration felt in your car, when you are sitting at idle compared to driving over rumble strips on the side of the highway: that’s the sensory difference between the two aircraft.”

Fifth-generation aircraft like the F-22 Raptor and F-35 Lightning II have what are termed as fusion engines, powerful computers that fuse all flight and sensor data together to provide the pilot with an overview of the battlespace throughout the mission. Discussing this capability on the F-22 Col Fesler said: “From an employment standpoint, much of my time in the F-15 was spent trying to be the fusion engine, to take the data from the federated systems and build a three-dimensional picture in my mind and then communicate it. In the F-22, fusion is done for me and to a large degree the communication is done for me as I export the fused picture [via the intra flight datalink] out to other F-22s. That takes the workload away, so I can focus on where I want to put my aeroplane to optimise the offensive capability or to have the greatest survivability. Do I have enough excess capacity that now I can do that for everybody else in the battlespace? For example, where should I send the F-15s, the F-16s, the F/A- 18s? Because I do not have to work through the sensor feeds [to build a picture of the battlespace], I can go: F-15s, it would be best if you go to here to target this group [of threats], this is the ID and this is how far they are from you; F-16s, this is what you have in front of you. Go get those threats and this is the best place for you. It’s quarterbacking from a fighter cockpit: in other words, airborne command and control from a fighter cockpit.”

Comparing his former mount, the F-15C Eagle, to the fifth-generation F-22 Raptor, Col Fesler noted how the new jet has changed tactics: “What is interesting is that when I was a new wingman flying the F-15 my job was to stay visual with number one, he would get me to the merge and I would find my one target on the way in and shoot it. Today, because the processes involved with searching for and engaging a target is all automatic, I ask my F-22 wingmen to be able to act as an airborne manager of the air battle space not just the cockpit or a two ship. That’s asking a lot of our young guys, but the aeroplane helps to do that.

“Automation of the F-22’s sensors makes a missile shot a lot easier, in that while I’m in the process of prosecuting an attack my aeroplane is continuing to look for and tracking other threats. The F-15 requires a lot more management of its sensors, and once I started to employ a missile my situational awareness would shrink down. In the F-22, my situational awareness is maintained, which makes this part of the mission a lot easier. In addition, the ability to remain supersonic for extended periods of time without the use of afterburner is a tremendous capability and certainly changes the employment of weapons as well.” 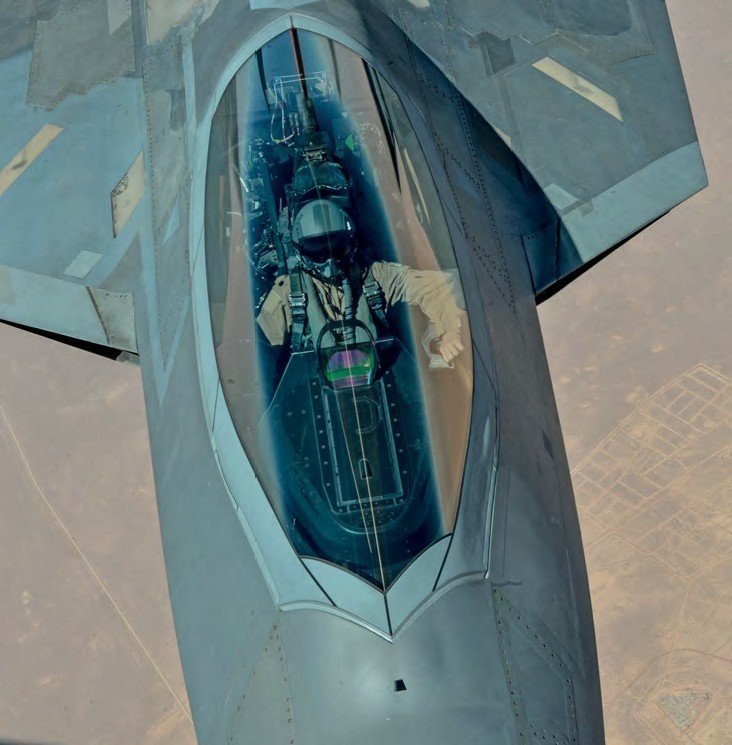 An F-22 Raptor receives fuel from a KC-135 Stratotanker during a mission in support of Operation Inherent Resolve.
SSgt Michael Battles/US Air Force 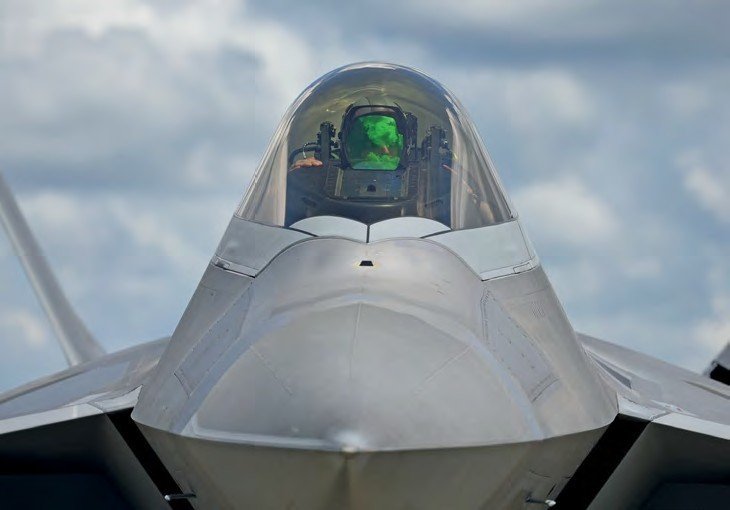