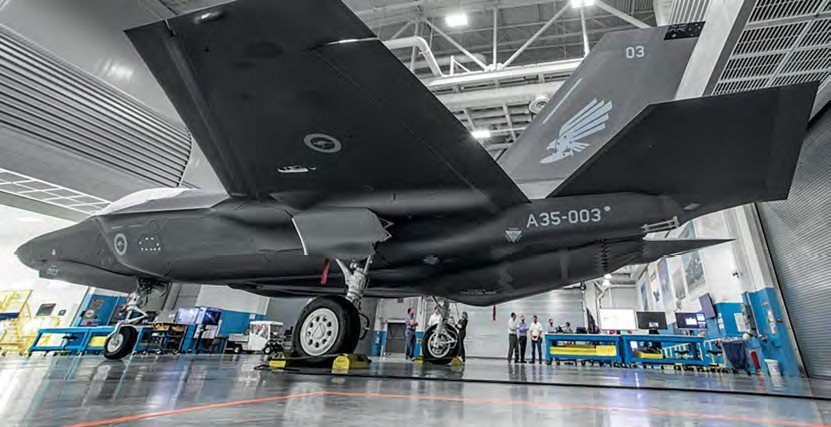 THE THIRD Lockheed Martin F-35A Lightning II for the Royal Australian Air Force (serial number A35-003) was rolled out of the factory at Fort Worth in November, appropriately painted in the markings of No.3 Squadron, the first operational fighter squadron to convert to the type.

On the other side of the ledger, two veteran Royal Australian Navy helicopter types in the shape of the Aerospatiale AS350BA Squirrel and Sikorsky S-70B-2 Seahawk, bowed out of service on December 1.

The Royal Australian Air Force’s (RAAF) third F-35A (c/n AU-03) is one of eight (A35-003 to A35-010) being procured in low-rate initial production Lot 10, and all will be delivered to the US Air Force’s 61st Fighter Squadron at Luke Air Force Base, Arizona, during 2018, where they will join the international F-35 training school.

The first two RAAF aircraft delivered (A35-001 c/n AU-01 and A35-002 c/n AU-02) are also at Luke and are being used to train Australian and American F-35A pilots and RAAF maintenance personnel. 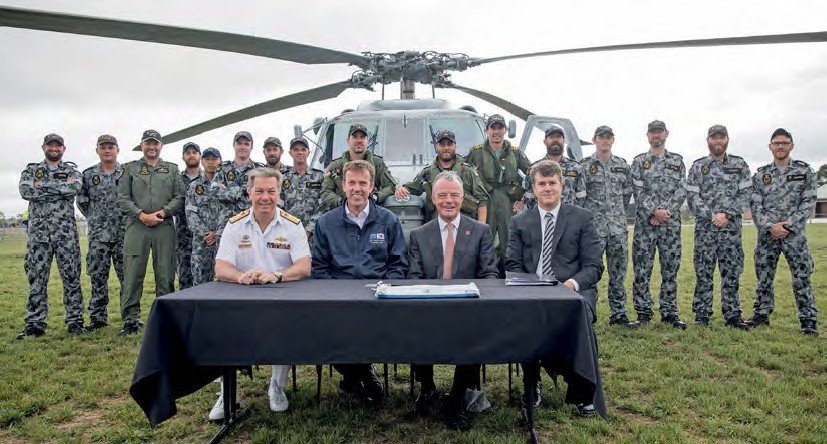 There are now six RAAF pilots trained on the F-35A, including the Commanding Officer of No.3 Squadron, Wing Commander Darren Clare. In a ceremony at RAAF Williamtown, New South Wales, on December 8, Wing Commander Clare formally took over command of the Squadron, which has now ceased operating the McDonnell Douglas F/A-18A Hornet.

Williamtown will be one of two main operating bases for the F-35A in RAAF service (the other is RAAF Tindal in the Northern Territory, home to No.75 Squadron) and preparations are underway for delivery of the first two aircraft to Australia in December 2018.

Following a period of verification and validation activities in the unique Australian operating environment, including testing the IT interface with the local environment, further aircraft will be delivered to Australia in pairs throughout 2019.

The first two units to convert to the aircraft will be No.2 Operational Conversion Unit and No.3 Squadron at Williamtown and, according to Air Vice Marshal Leigh Gordon, head of Joint Strike Fighter for the Defence Capability Acquisition and Sustainment Group (CASG), the Australian F-35A programme remains on track to achieve initial operational capability (IOC) on schedule by the end of 2020.

Air Vice Marshal Gordon said: “There is always risk, but at the moment the programme is on schedule and we’re forecasting to deliver on schedule in accordance with our plan to IOC. Everything is on track for IOC in December 2020 and indeed on track to support the first two aircraft arriving in Australia in December 2018.”

After 2 OCU and No.3 Squadron become operational on the F-35A (an event defined by IOC), the remaining two units – No.77 Squadron at Williamtown and No.75 Squadron at Tindal – will undergo their own conversion to the Lightning II, ahead of final operational capability being declared by the end of 2023. 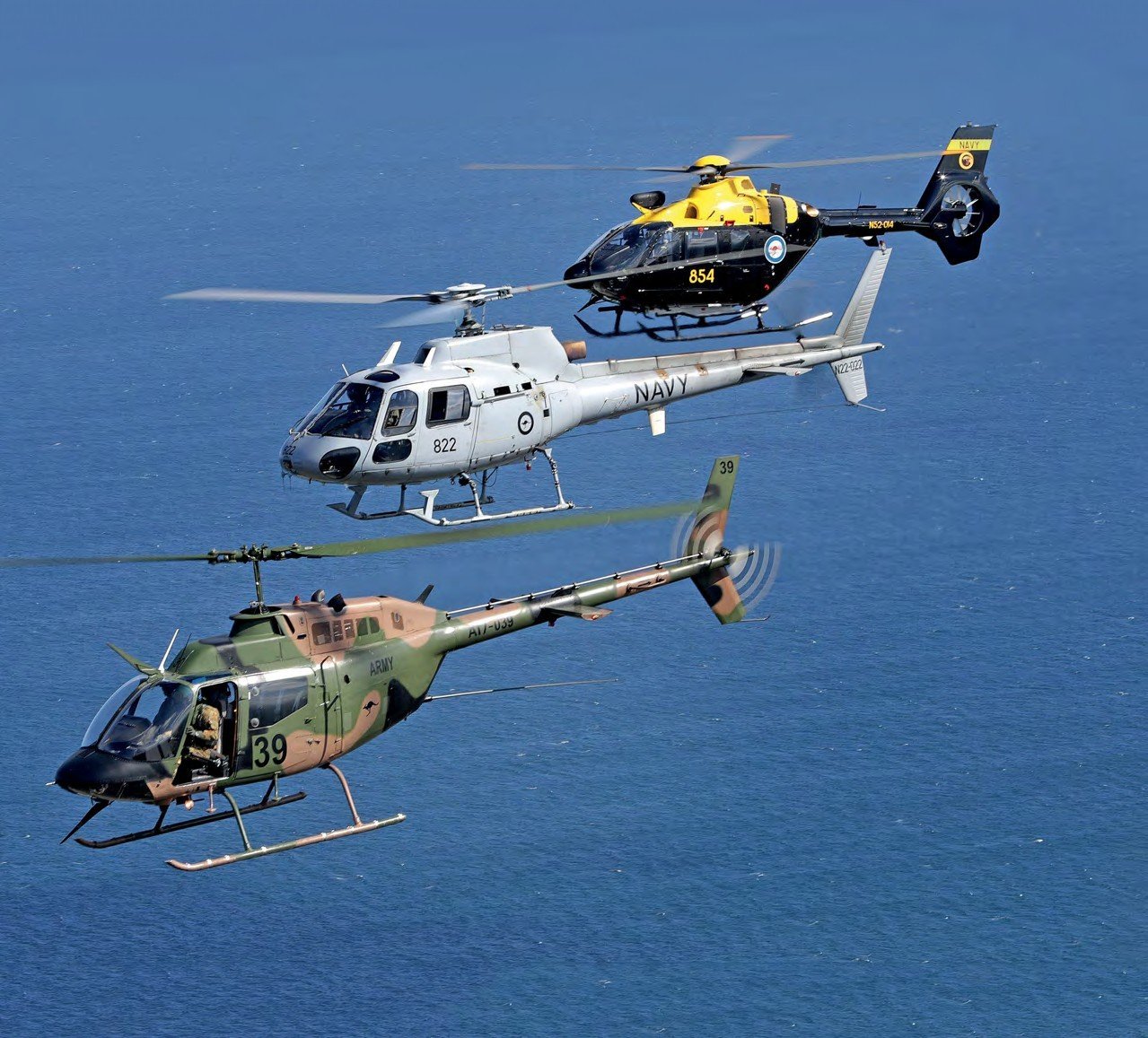 In a dual ceremony at HMAS Albatross, near Nowra, south of Sydney, on December 1, the Royal Australian Navy’s Fleet Air Arm said farewell to both the Seahawk and Squirrel, after 29 and 33 years of service respectively.

The S-70B-2 Seahawk, flown by 816 Squadron, has been replaced by the Lockheed Martin/Sikorsky MH- 60R Seahawk, which is now the Fleet Air Arm’s naval combat helicopter.

The final S-70B-2 Seahawk (or Bravo) operational deployment to the Persian Gulf had been completed in July with the return of the Anzacclass frigate HMAS Arunta and three of the 16 helicopters originally delivered were maintained in an operational condition to the very end, albeit shore based at Nowra. In 29 years of operational service, no Seahawks were lost.

The first aircraft (serial number N24-001) first flew in December 1987 and the type entered service in 1989 and was shortly deployed afterwards to the Middle East during the first Gulf War.

Speaking at the farewell ceremony, Commander Fleet Air Arm Commodore Chris Smallhorn said: “In 1989, the Bravo was without doubt the most advanced maritime helicopter of its age. It has proven to be a magnificent combat helicopter for anti-submarine and surface operations and also served us exceptionally in secondary utility type missions.

“The Bravo has had an almost continuous presence in the Middle East since 1991 and was always on station at home, having come to the assistance of countless Australians.”

Shortly after the ceremony one aircraft (serial number N24-003, side number 872 and named Christine after the 1983 American horror movie, due to its temperamental nature) was flown from Nowra to Canberra on delivery to the Australian War Memorial.

The AS350BA Squirrel first entered service with the Royal Australian Navy (RAN) in 1984; by mid-2017, just six remained on strength with the Navy’s 723 Squadron at Nowra, the last survivors of a helicopter type that has served in all three services of the Australian Defence Force in its 33-year operational history. Six were initially acquired by the Navy for utility and survey roles, but the fleet was expanded with the transfer of eight former Australian Army (and before that Royal Australian Air Force) aircraft in 2000, when 723 Squadron assumed the helicopter aircrew training role for RAN pilots and observers.

The Squirrel was also deployed to the Persian Gulf aboard RAN warships earlier in its career. Painted grey and armed with a door-mounted machine gun, they earned the nickname Battle Budgies. Referring to both the Seahawk and Squirrel, Commander Fleet Air Arm Commodore Chris Smallhorn said: “These aircraft have proven to be some of the most successful airframes in naval aviation history. Over 30 years, the majority of naval aviators have trained in the Squirrel and many, including myself, have wonderfully fond memories of their time learning to fly. The Squirrel has been so versatile in peace and war that it has created a truly impressive chapter in the history of the Fleet Air Arm.”

The Squirrel will be replaced in the training role from January 2018 by the Airbus Helicopters H135 (EC135 T2+) under the joint Army-Navy Helicopter Aircrew Training System programme. Like the Seahawk, one aircraft has been delivered to the Australian War Memorial. The helicopter (serial number N22-017, side number 864) was delivered by road in August and was one of four Squirrels deployed to the Middle East during the first Gulf War.