F-35A in combat and controversy, and a future Army rotorcraft 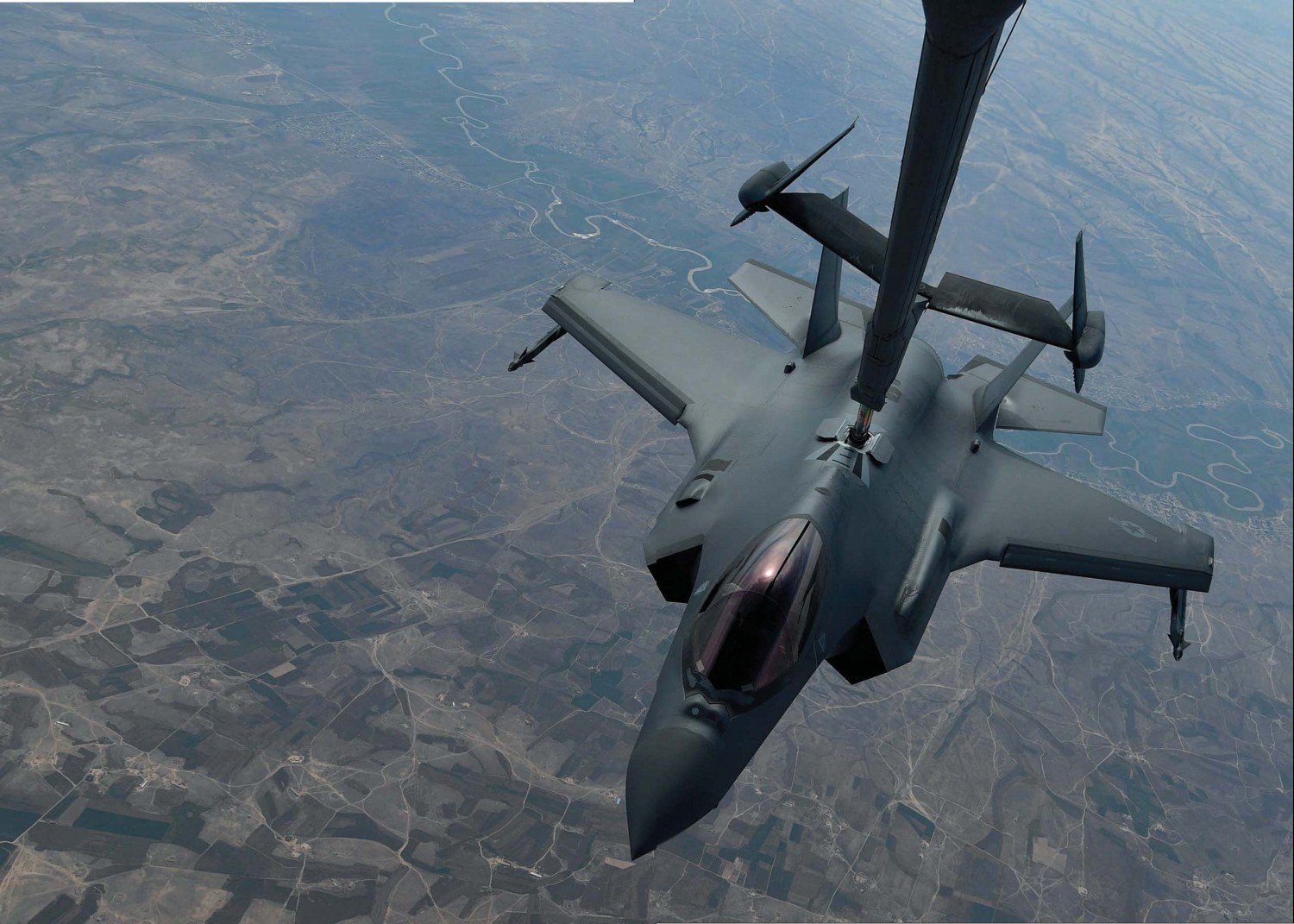 A KC-10 Extender refuels an F-35A Lightning II on April 30, 2019, the day the US Air Force F-35A weapon system made its first combat strike.
SSgt Chris Drzazgowski/ US Air Force

US Air Force F-35A Lightning IIs flew combat missions for the first time on April 30, striking an ISIS insurgent tunnel complex and weapons cache in the Hamrin Mountains near Wadi Ashai in northeast Iraq. The strike involved Joint Direct Attack Munitions, although the weight class and type of guidance used were not disclosed.

A force of at least ten F-35As, operated by personnel from the 388th and 419th Fighter Wings based at Hill Air Force Base, Utah, deployed to Al Dhafra Air Base in the United Arab Emirates on April 15. Previous combat missions had been flown by Israeli Air Force F-35As over Syria and US Marine Corps F-35Bs over Afghanistan.

• Boosted” or “praised” Boeing in meetings.

• Put “his finger on the scale when it comes to Pentagon priorities” for procuring Boeing aircraft that the Military Services did not want. Specifically, he allegedly tried to force Commandant of the US Marine Corps, General Neller to buy Boeing F/A-18s, and threatened to cut other Air Force programmes unless Chief of Staff of the Air Force, General Goldfein supported buying Boeing F-15Xs.

These allegations relate to the mix of “fourth and fifth-generation” aircraft that the Department of Defense was purchasing.

• “Involved himself” in the KC-46 programme by “weighing on” the Air Force to accept the aircraft after technical problems delayed Boeing’s delivery. A report titled ‘Report of Investigation: Mr. Patrick M.

Shanahan Acting Secretary of Defense’ published on April 25, 2019 by the Office of the Inspector General, US Department of Defense, found he had done nothing wrong.

The report discussed high-level concerns with the direction of the F-35 programme under the Joint Program Office (JPO) and Lockheed Martin, who were, as then-Secretary of Defense James Mattis told the House Armed Services Committee on April 12, 2018, “not delivering the affordability that keeps solvency and security as our guideposts”.

Vice-Admiral Mat Winters, the F-35 Program Executive Officer (PEO) heading the JPO, told Office of the Inspector General investigators that Shanahan, when Deputy Secretary of Defense, had said, “It’s screwed up because you are accepting the poor performance by your industry partners, to include Lockheed Martin.” Shanahan himself told investigators that he thought management of the F-35 programme was “inadequate to meet the expectations of the President and then-Secretary Mattis.”

Shanahan was opposed to ramping up production of F-35s before upgrades were incorporated on the production line, delivering aircraft requiring what he termed “expensive retrofits”. He said: “From a taxpayer standpoint and then, more importantly from the warfighter standpoint, those airplanes would sit on the ground.” He said that while he was aware of the F-35’s capabilities in the air, he was focused on, “insufficient spare parts in the inventory, the cost per flight hour not decreasing fast enough, the logistics support system not having the functionality that the warfighters need to sustain the aircraft, and then the mission capability rates being to me, unacceptably low.”

In another report released in April by the Government Accountability Office – which issued three reports on the F-35 programme in 2016, 2017 and 2018 – identified continued sustainability issues affect ing F-35s in US service during the period May to November 2018.

Most of these issues had already been identified, but the report provided numbers that were the source of Shanahan’s concerns.

Looking at all F-35s in US service, the report said 27% were fully mission capable (all missions) and 52% were mission capable (for at least one of its missions). Some 30% of the time F-35s were unable to fly, it was because of spare parts shortages.

There was a repair backlog of about 4,300 F-35 parts. Getting the right parts to F-35s has also been a weak point. The report stated that 44% of the parts accompanying US Marine Corps F-35Bs on a recent deployment were incompatible with that version. Perhaps the most serious limitation identified in the report was that the Department of Defense does not know how many, and which F-35 parts it had ordered and lacks a database to keep track of its parts. Because there is one central pool of F-35 parts that US, international partner nation and foreign military sales customers alike draw upon, this shortfall has a direct impact outside the United States.

Issues with keeping track of spare parts and managing their status is associated with the F-35’s widelycriticised Autonomic Logistics Information System (ALIS). Some of the extensive problems identified lie with ALIS software, and are being addressed as a high-priority effort by the services, the JPO and Lockheed Martin. Dr Will Roper, the Air Force’s acquisition executive, told a Mitchell Institute briefing in Washington DC on April 12 about his services’ efforts: “We are taking on ALIS in Kessel Run,” the Air Force’s Bostonbased software laboratory that integrates operators with computer experts. He said: “ALIS was coded in an older era. I am confident Lockheed Martin would not have coded it like that today. Lockheed Martin is part of our team. They have given us their source code”. The team’s first ALIS upgrade will, he said, “take 10-15 hours of work out of our maintainers lives every week, with the first agile update going to Nellis [Air Force Base, Nevada]”. 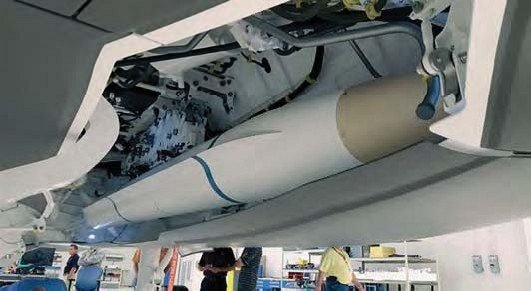 The AARGM-ER missile features the same warhead, guidance and control sections as the AGM-88E AARGM, but its enhanced airframe and strakes for improved range and survivability are very different.
Northrop Grumman 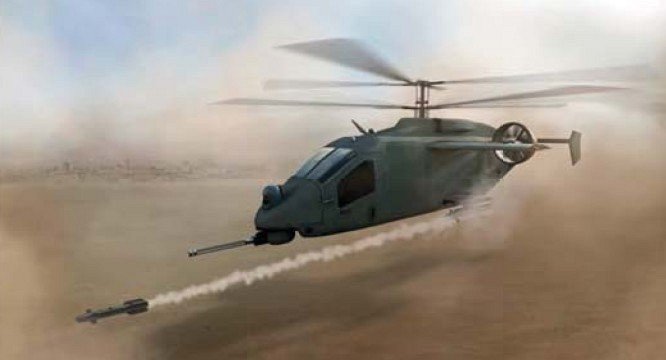 On April 19, Lockheed Martin announced it was moving its relationship with several of the major F-35 subcontractors into a performance-based logistics relationship. This is intended to enable longer-term investment and effective planning by the subcontractors, and therefore contribute to predictability and ontime delivery to reduce the spare parts backlog and permit a ramp-up in production.

The F-35 JPO and Lockheed Martin are aiming to meet an 80% mission capable goal for combatcoded (not training or research and development) F-35s across all three US services by the end of this year, and an F-35A per-hour flying cost of $25,000 by FY2025.

On April 10, the US Department of Defense announced that Admiral Winter will be replaced by his current deputy, Air Force Major General Eric Fick. While the date of the changeover has not been announced, Winter is scheduled to complete his three-year tour as PEO in 2020.

The US Air Force is leading a programme to arm F-35As with the extended range version of the Advanced Anti-Radiation Guided Missile dubbed the AGM-88E Block 1 AARGM-ER. This big stick is currently under development by US Naval Air Systems Command, intended for use by F/A-18 Super Hornets and EA-18G Growlers with initial operational capability planned for 2023.

The AARGM-ER entered the engineering and manufacturing development phase on March 7, three days after receiving its Milestone B approval; it will start captive carriage testing in FY2020 and enter flight testing in FY2021.

Some AARGM-ERs will be procured by the US Air Force to provide a near-term capability (starting in 2025) for what the service calls its stand-in attack weapon. Procurement funding was requested in the Air Force FY2020 budget submission.

To meet the internal carriage requirements of the F-35A, both the AARGM-ER missile and the aircraft’s weapon bay will be modified. The missile will receive an interface with the universal armament interface, a new fuse and warhead. Reportedly, other US and international F-35 operators have expressed preliminary interest in the AARGMER as an option.

On April 23, some two months ahead of the expected date, the US Army announced the five teams that will be submitting competing designs for the Future Armed Reconnaissance Aircraft (FARA) programme, intended to meet Capability Set 1 of the Future Vertical Lift family of rotorcraft.

Boeing’s design is believed to be a compound helicopter (equipped with a pusher propeller) based on a scaled-down version of its AH-64 Apache (to reduce costs and increase commonality), but with stub wings. Both new features were developed for the Apache in Boeing-funded research and development programmes. The AVX-L3 Technologies team is also offering a compound helicopter, reportedly a clean-sheet design with coaxial rotors and dual ducted fans. Bell had reportedly been considering a tiltrotor design, but is instead competing with a helicopter incorporating technologies from the civilian Bell 525 Relentless, and a fly-by-wire control system derived from the Bell-Boeing V-22 Osprey tiltrotor. Sikorsky’s design is reportedly based on its S-97 Raider technology demonstrator, a compound helicopter with coaxial rotors. Karem Aircraft’s design is reported to differ from its Optimum Speed Tilt Rotor.

MD Helicopters, whose design proposal was not accepted by the Army for the competition, filed a protest with the Government Accountability Office. After the protest was turned down, MD Helicopters filed a suit in the federal court, claiming the Army failed to evaluate properly its SwiftX design, based on its tail rotor-less MD969 attack helicopter.

The five competitors will receive contracts for up to $15 million each to complete their designs. Two of these will be chosen in March 2020 and prototypes built as a risk-reduction effort, powered by General Electric Improved Turbine Engines, and fly by 2023. One design will be selected to start full-scale development in 2024. However, while the US Army wants the FARA to enter service in 2030, it is not committing to awarding the contract to one of the two prototypes.