It might not have been the most manoeuvrable aircraft during the dogfights of the Korean war, but it quickly became the most formidable. Tara Leggett looks at the history of a record-breaking aircraft

How different would the F-86 Sabre have been without some stolen aerodynamic data from Germany?

Its just one of a host of intriguing questions about a machine who many believe beat Chuck Yeager and his Bell X-1 to become the first jet fighter to break the sound barrier.

What can’t be disputed is that the F-86 Sabre was the first swept-wing fighter jet in the USAAF, and quickly became a much-loved staple when entering into dogfights with the Soviet MiG-15. Before this, however, the development of the aircraft began in 1945, with the inaugural flight taking place on October 1, 1947 as the XF-86. 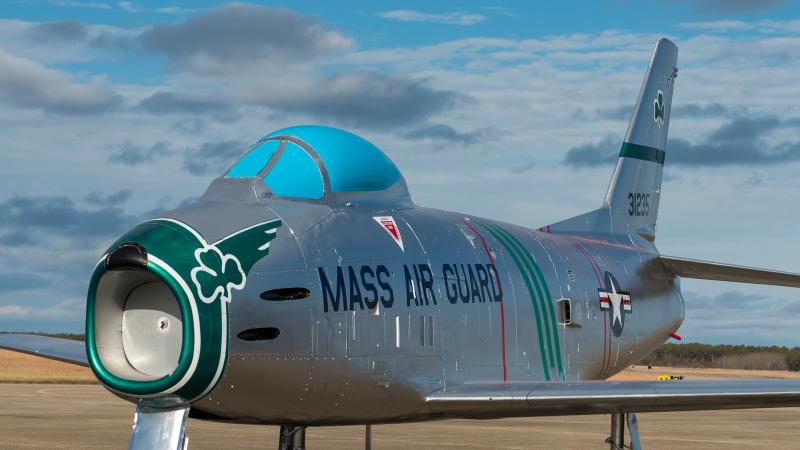 The earliest model of the F-86 was equipped with a Chevrolet-built J35-C-3 engine that had a 4,000-pound thrust. Early versions of the jet displayed many impressive characteristics: its high speed was 618mph at 14,000ft, its climb rate was 4000fpm. The Sabre dwarfed the capabilities of previous American fighters, including the legendary prop-driven P-51, whose top speed measured just 440mph in comparison. Upon its third production, the Sabre had been equipped with a new, Allison-built J47-GE-13 engine, which exhibited a 5,200 pound thrust. All F-86 Sabres had a service ceiling of more than 45,000ft.

One of the most iconic features of the F-86 was its 35-degree swept wing. As America’s first swept-wing fighter, its designs capitalised on stolen German aerodynamic data, which showed that swept-wing aircraft could be controlled at much higher Mach numbers than straight-wing aircraft. This was due to the fact that swept-wings allowed delayed air compressibility effects at high subsonic airspeeds.

As a result, there has been controversy surrounding the fighter, with some aviation enthusiasts claiming that it was in fact the first jet aircraft to ever break the sound barrier when it entered into a dive during one of its first flights. This occurred just months before Chuck Yeager succeeded in breaking the sound barrier in the X-1. As the Sabre’s accomplishment was never officially recorded or confirmed, Yeager holds the record to this day. Yet while the swept wing allowed for success at high speeds, it portrayed stability problems at lower speeds. In order to combat this, designers added automatic leading edge slats to the wing, which solved the stability issue. 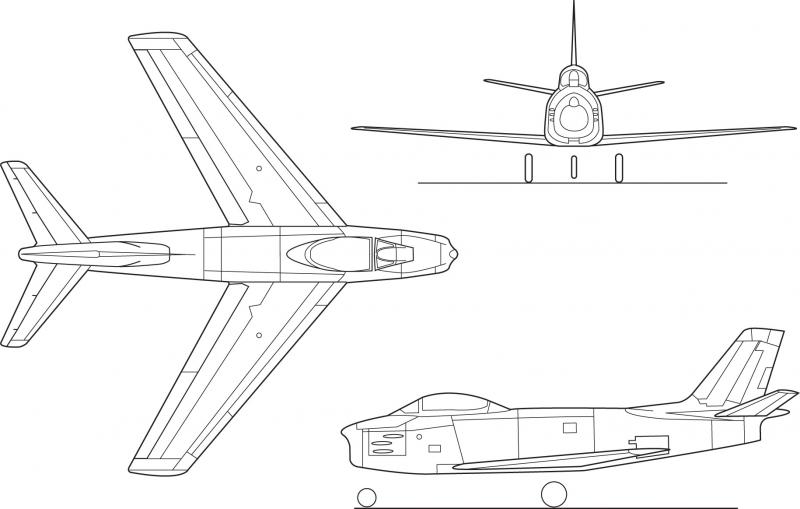 The F-86 Sabre is best known for its domination of the Russian-built MiG-15 during the Korean War. While perhaps inferior to the MiG-15 on paper, the Sabre showed impressive capability during dogfights, which allowed it to be involved in fighting some of the earliest jet-to-jet battles in history. The Sabre was armed with six .50-caliber M-3 machine guns in the nose, just short of the aircraft’s jet intake.

It benefitted from new radar-assisted gunsight technology, which required the pilot to hold the cross hairs on a target for a single second. From the moment the pilot locked on, they were free of the previously complicated problem of adjusting for the target’s range during active combat. As the F-86 was the first night fighter to carry just one airman and have only one engine, it was considered revolutionary. In fact, the fire control system was so automatic that a second airman was superfluous and unnecessary. The belly of the aircraft housed 24 2.75 ‘Mighty Mouse’ air-to-air rockets in a pod that was lowered to fire, which was then quickly retracted again in order to ensure the speed and handling characteristics of the aircraft were not impaired.

Although the F-86 Sabre displayed exciting capabilities, by all accounts it should have been inferior to the MiG-15 in its dogfighting and combat skills. The aircraft was designed specifically to combat the MiG threat, rather than incorporating a design solely on its own accord. It was incapable of the sharper manoeuvres of the MiG-15 and overall incorporated less impressive specifications – yet somehow, it came out on top, with far more enemy aircraft kills than that of the MiG-15 during the Korean War. 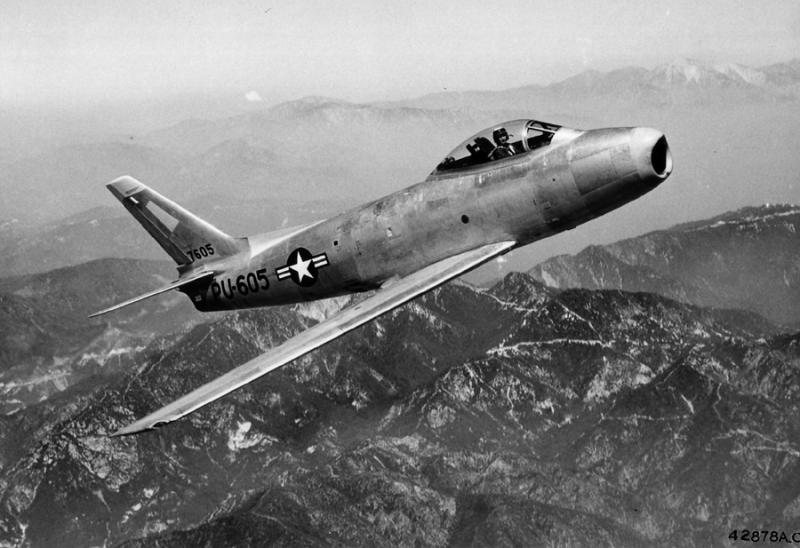 The first Sabres to arrive in Korea landed on December 13, 1950, with the first action against the menacing MiG-15s taking place four days later. Some have attested that its success was due not to the aircraft itself, but to the skills of the pilots themselves, who were often World War II veterans. One of the first pilots to down a Soviet-built MiG-15 was Lt. Col. Bruce Hinton.

He and his flight of four Sabres lured a flight of MiGs into a dogfight by simulating flight characteristics of the less capable F-80 Shooting Star. The Soviets fell for it and began to engage in hostilities with what they thought were the inferior aircraft. However, they got more than they bargained for when Hinton and his wingmen turned out to be piloting the F-86 Sabre.

Hinton turned and shot with his nose-mounted .50-caliber machine guns, committed to downing the MiG-15 and raining down fire onto it until it was nothing but a flame falling from the sky. The F-86 Sabre went on to obtain a kill ratio of 10:1 over the MiG-15. By the end of the Korean War, almost 800 MiG-15s had been lost to the F-86 Sabre. In comparison, less than 80 Sabres had been shot down by the MiG. 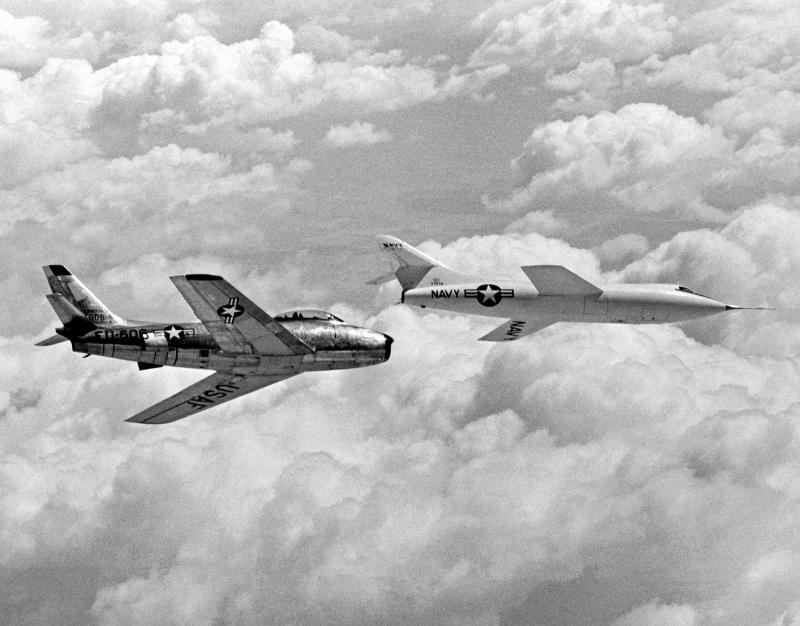 Many ‘firsts’ were attributed to the F-86 Sabre. The F-86F variant of the aircraft became the first Sabre to carry a 1,200lb nuclear bomb under its port wing. In order to deliver such a dangerous weapon unscathed, the Sabre was fitted with a Low Altitude Bombing System (LABS), which allowed it to escape the impending nuclear blast.

Various models of the F-86 held world records for speed over the course of six consecutive years, winning numerous National Aircraft Show Bendix trophies and setting five officially documented records. It was the first swept wing aircraft in the USAAF fleet, and it was the first fighter to be capable of fighting with just one airman. Despite the odds being stacked against it, the F-86 Sabre was undeniably the most iconic American fighter of the Korean War era. 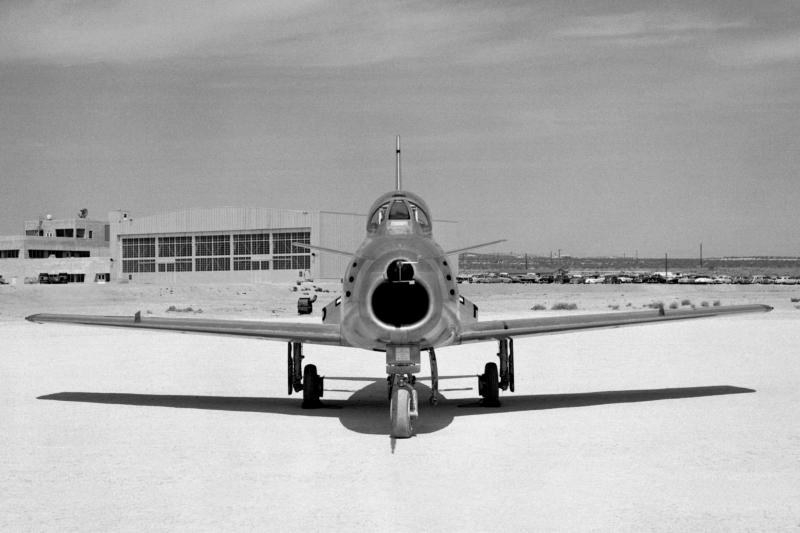 All pictures: US Department of Defense