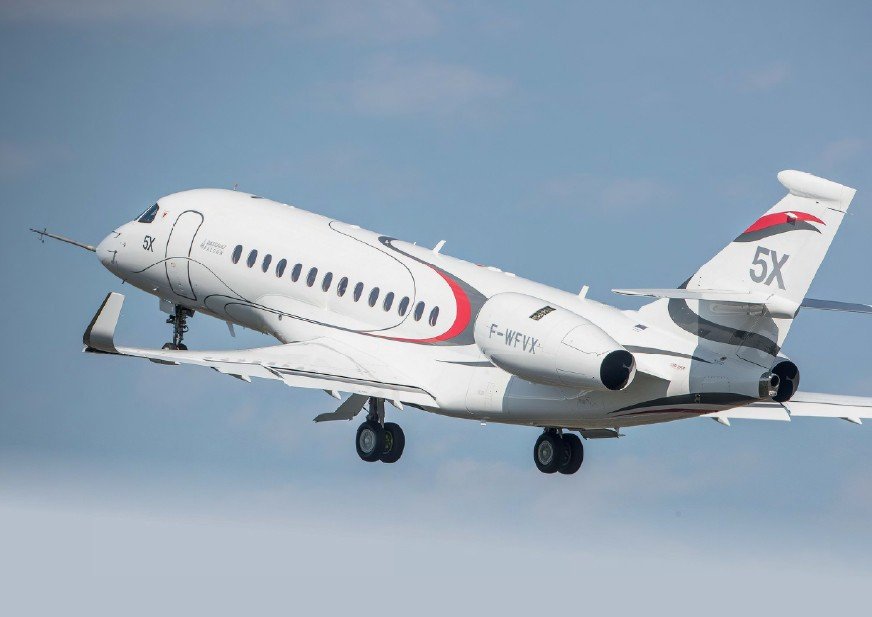 Visible in this view of the Falcon 5X are the flaperons, in the middle part of the wing trailing edge, which combine the lift/drag-producing effects of flaps and the roll control authority of ailerons.
A Daste/Dassault Aviation

The maiden flight of the first prototype of the new jet, F-WFVX, took place two years later than originally scheduled when the Falcon 5X was launched in 2013. This was a result of what Dassault terms “design issues” with the aircraft’s Snecma Silvercrest engines that have caused a significant delay to the powerplant’s development and, in turn, affected Dassault’s timetable for bringing the latest Falcon to market.

Even so, assuming an eight-passenger load and a Mach 0.85 cruise speed, the Falcon 5X will still be able to fly nonstop between city pairs such as New York–Moscow, London–Miami, Geneva– Johannesburg and Beijing–Seattle.

However, what differentiates this Falcon is not its range but its interior. At 1.98m (6ft 6in) in height by 2.58m (8ft 6in) in width, the Falcon 5X cabin is the largest of any Falcon variant to date and, Dassault says, the tallest of any business jet on the market. Excluding the cockpit and baggage area the cabin has 50m3 (1,770ft3) of volume.

There are three distinct and customisable lounge areas, 28 fuselage windows and a sky light in the galley (an industry first), hidden compartments for storing electronic devices and electrical chargers and LED cabin signage that is invisible when not illuminated. All are features designed to create a spacious feel.

The FalconCabinHD+ cabin management system, developed in cooperation with Rockwell Collins, uses the onboard fibreoptic network to distribute HD audio and video content throughout the cabin.

The large interior is not the only notable aspect of the Falcon 5X. The aircraft also has an advanced digital flight control system (DFCS) which, Dassault claims, “totally rethinks the traditional functionality of each flight control surface”.

The DFCS commands all the Falcon 5X’s flight control surfaces, including the flaps and slats. Each control surface is multifunctional: for example, the ailerons can also function as airbrakes. Dassault says this harmonises control inputs and provides stability in pitch, roll and yaw. The DFCS also automatically trims the aircraft.

The Falcon 5X’s all-new wing features a moderately swept leading edge (with a 33° angle of sweep) and a curved trailing edge, which together with the winglets provide the highest lift/drag ratio of any Falcon variant yet produced.

However, the stand-out aerodynamic feature of the Falcon 5X is its flaperons. These are active high-speed deflection control surfaces located on the trailing edge between the ailerons and the flaps. The Falcon 5X is the first business aircraft to use them.

As their name implies, flaperons combine the lift/drag-producing effects of flaps and the roll control authority of ailerons. Dassault previously designed flaperons for the Rafale and the nEUROn unmanned combat air vehicle technology demonstrator.

Flaperons operate differentially to the other control surfaces, deflecting downwards as the ailerons deflect upwards. Integrated with the DFCS, the flaperons are always active, which enhances roll authority.

During approach, the flaperons will act as an additional pair of flaps, which will increase drag, and because they operate differentially to the ailerons, they will enable the aircraft to maintain a high lift coefficient.

The result is that the pilots will be able to fly a steep approach angle without an increase in approach speed, with the flaperons helping to maintain optimal control all the way to touchdown. The Falcon 5X will be able to conduct steep approaches of up to 6o, which is of benefit to operations at business aviation hubs requiring steep descents, such as London City, St Moritz and Aspen.

Another DFCS feature designed to assist in handling is a nosewheel steering control function, which is intended to improve controllability during ground taxiing and help pilots more precisely keep the aircraft on the runway centreline during take-off and landing.

Like its larger Falcon 8X stablemate, the Falcon 5X has the latest, third generation of the EASy flight deck suite Dassault uses on all its bizjets (and which is derived from the man-machine interface developed for the Rafale). The EASy suite, which uses Honeywell’s Primus Epic avionics as its hardware platform, intends to create a highly interactive and intuitive flight deck and maximise pilots’ situational awareness.

The two outboard primary display units show aircraft configuration, engine parameters and the crew alerting system. There are two inboard multifunction display units (MDUs), stacked vertically in the centre of the instrument panel. Typically, the upper MDU is used to control and display navigation functions and the lower MDU is used for the flight management system, checklists and systems information.

An autosensing feature automatically checks off items such as setting flaps for take-off, and then signifies this to the crew by changing the colour of checklist items listed on the MDU from blue to green. Graphical fight planning enables pilots to use the CCD to click on an icon depicting each phase of flight to bring up the menus they need.

The Falcon 5X’s development has been delayed by development issues with the Snecma Silvercrest engines powering the aircraft.
A Daste/Dassault Aviation

The EASy checklists are linked to synoptic system displays. Dassault explains: “For example, when the pilot reaches a fuelrelated item on the checklist, a fuel-system diagram pops up adjacent to the checklist window. This shows the real-time position and operation of pumps and transfer valves along with a graphic depiction of fuel quantities in each tank.”

There is a worldwide database for airports, airways, navaids and radio frequencies, as well as the complete aircraft performance database. Take-off performance (taking account of runway length and V-speeds), climb schedules, fuel reserves and landing distance, can all be automatically calculated by EASy, and new information is displayed as the flight progresses.

Two electronic flight bags can be integrated into the front instrument panel and there is a capability to accommodate dual Elbit Systems head-up displays that provide a wider field of view and show enhanced vision system and synthetic vision system data.

A different feature of EASy in the Falcon 5X compared to other Falcon variants is a new Honeywell RDR-4000 3D weather radar. This displays hazardous weather and the vertical definition of thunderstorms at a range of 320 miles (514km), giving pilots a more accurate depiction of conditions on the route ahead.

The integration of onboard diagnostics capabilities aboard commercial aircraft is a major development area in the industry, and in another example of this trend the Falcon 5X will feature a real-time, self-diagnosing maintenance system called FalconScan.

This system will use the onboard computers and patented algorithms to monitor more than 10,000 different system readings on the aircraft. FalconScan will then transmit this information via satellite in real time to operators, providing notifications of in-flight maintenance events and status reports and allowing maintenance teams to begin troubleshooting any issues while the aircraft is still in flight.

Two new endurance testing methods, Highly Accelerated Life Tests and Highly Accelerated Stress Screening, will also subject equipment and systems on board the aircraft to extremes of vibration, humidity, temperature, pressure changes and other in- flight phenomena to verify their reliability and identify any early failures.

The Falcon 5X will be powered by a pair of Snecma Silvercrest high-bypass engines, each generating 11,450lb (50.9kN) thrust. This engine features a 6:1 bypass ratio which Dassault says, “will permit a significant reduction” in fuel burn, NOx emissions, maintenance costs and noise. The Silvercrest has also been selected to power the Cessna Citation Hemisphere.

The Silvercrest uses technologies derived from Snecma’s military and commercial aero engines, including the CFM56, and features an in-flight health monitoring system that automatically transmits onboard data about anomalies to Snecma support teams.

In 2015, development problems with the Silvercrest were encountered: reportedly, airflow through the low-pressure turbine was not as controlled as expected. A solution was found by adding controls and tweaking the engine control software.

The problems disrupted the Falcon 5X’s development schedule. When it launched the aircraft in 2013, Dassault planned a first flight in Q2 2015, certification by the end of 2016 and service entry in 2017. For a while things ran on track. The first aircraft powered-up in August 2014 and subsequently started ground tests, and a static test bench also undertook strength and fatigue tests.

However, the issues with the Silvercrest led Dassault to announce early in 2016 a revised development timetable for the aircraft, calling for preliminary flight tests using the updated Silvercrest in 2017. The recent flights using F-WFVX are those preliminary trials collecting airframe and systems data to complement the information from a ground test campaign held in the spring, which included lowspeed and high-speed taxi trials.

The data collected in all these tests will help build maturity on the Falcon 5X ahead of the first fully fledged tests using the modified engines in 2018. The Falcon 5X’s service entry is now scheduled for 2020.

Eric Trappier, Dassault Aviation Chairman and Chief Executive Officer, said: “We will closely monitor the validation tests on the modified Silvercrest … as their results will be critical for meeting the 5X entry into service.” Trappier has stressed how “our customers are anxious” to fly the aircraft. Dassault itself will, of course, hope the development issues are a thing of the past. The company has already felt some impact from the delays; according to its latest annual financial report it lost orders for 12 Falcon 5Xs last year. 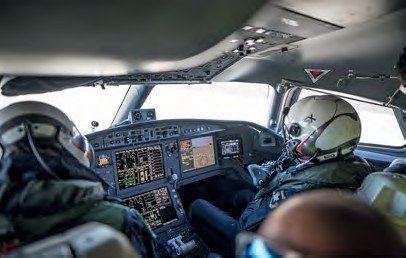 A third-generation version of Dassault’s EASy flight deck, which uses Honeywell’s Primus Epic avionics, is designed to be highly interactive and intuitive to maximise pilots’ situational awareness.
A Daste/Dassault Aviation 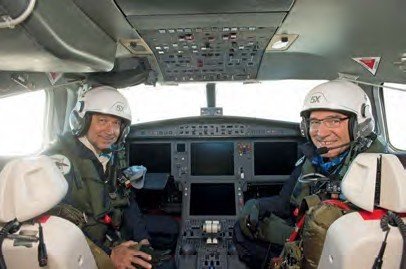