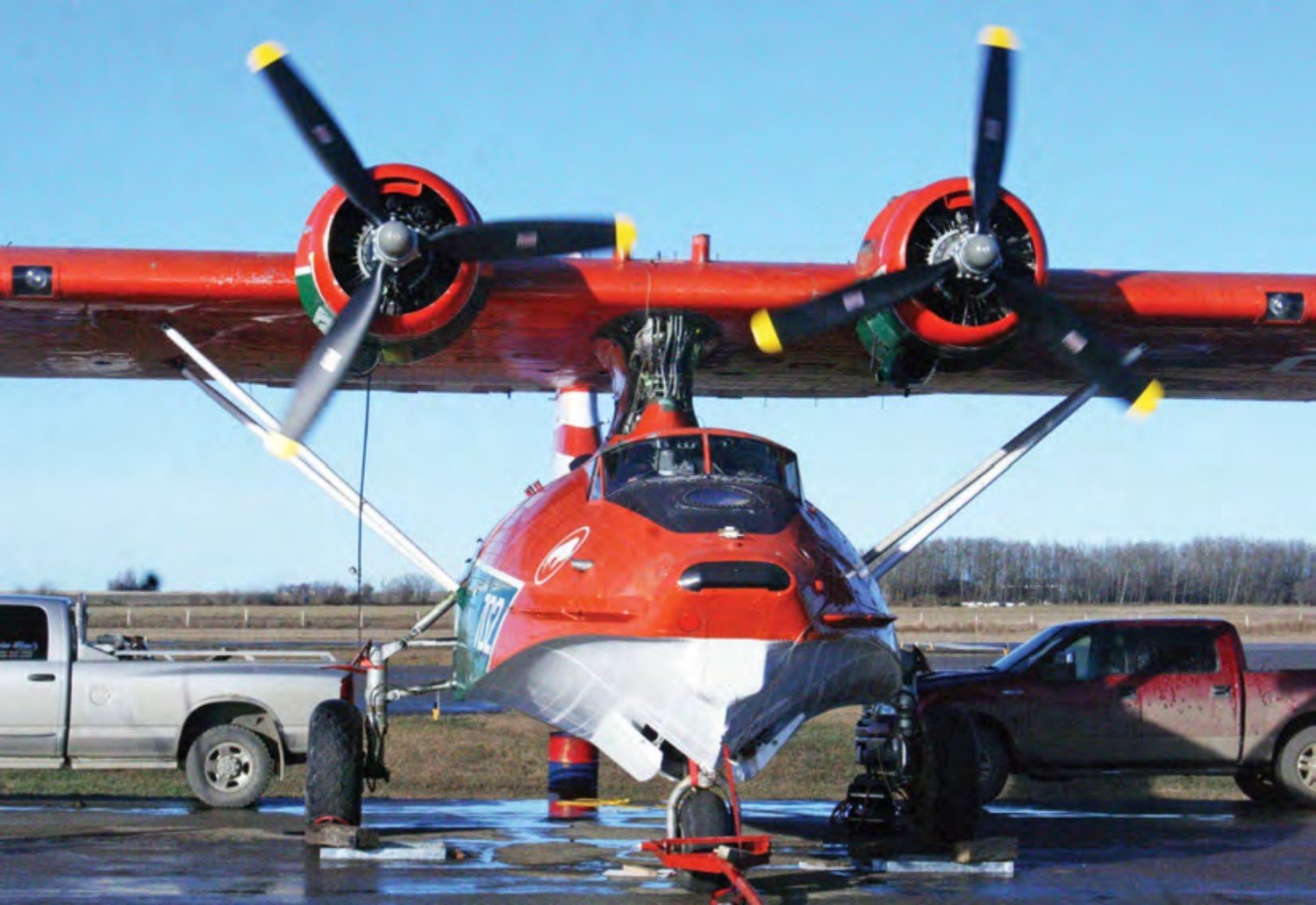 At Fairview Airport, northern Alberta, the nine-year restoration of Canadian Vickers PBV-1A Canso C-FNJE by the Fairview Aircraft Restoration Society (FARS) is approaching completion, with a first flight due during late April. The machine is scheduled to make its debut public flying appearance at Fairview Airport on 18 June, when two pilots who flew this very machine, RCAF 11094, on patrol missions during the war will be in attendance: 99-year-old James McCrae will travel there from his home in Nova Scotia, and 94-year-old Hal Burns will be making the trip from his home in Victoria, British Columbia to see their old mount in the air once more.

The former fire-bomber hasn’t flown since 24 July 2001, when it was damaged during a water pick-up at Sitidgi Lake near Inuvik, North-West Territories, while being operated by Buffalo Airways from Yellowknife. It sank to a depth of about 90ft, but was soon salvaged. The engines were removed before the Canso was abandoned on the lakeshore, where it was to sit for the next seven years.

It would probably still be there had it not been for a chance encounter between Fair view based farmer Don Wieben and Joe McBryan, the owner of Buffalo Airways. While talking about Canadian-built Cansos, ‘Buffalo Joe’ — now famous through his appearances in the TV series Ice Pilots — told Don where C-FNJE was sitting, and suggested that, if he wanted one, he should go and get it. Don recruited five other farmers from Fairview, who ventured north. While preparing the Canso for the journey south they camped out in -25°C temperatures in a canvas tent that they named ‘the wilderness workshop’.

One of the intrepid farmers, Doug Roy, says: “We had some connections up there. We knew some people that were associated with the Inuit council, and I knew the head of the tribal council. That helped a lot to get approved to go and do it.”

During April 2008 the team used a Snowcat to drag the PBY across the frozen lake and over the tundra to Inuvik. The wing was removed before ’NJE was placed onto a barge on the Mackenzie River and floated 1,500km to Hay River, where the amphibian was transferred onto two trucks for the trip to Fairview. Total mileage for the move was more than 3,000km.

A second chance encounter solved a major problem: the lack of engines. Don Wieben and another of the farmers, Joe Gans, were holidaying in Newfoundland and Labrador when they discovered a further former fire-bomber, PBY-6A C-FIZU, on display in a memorial park in the town of St Anthony. It had last flown in 2007 and was fitted with a pair of low-time Pratt & Whitney R-1830s. The FARS group acquired a couple of high-time engines, and the mayor of St Anthony agreed to a swap, the team changing the engines over during April 2013. Three-and-a-half years later, on 13 November 2016, the Twin Wasps were fired up for the first time at Fairview.

Built at the Canadian Vickers factory at Cartierville, Québec and given the serial RCAF 11094, the Canso was delivered to No 162 Squadron at RAF Reykjavik, Iceland during December 1944. Following operational use it went to Scoudouc, New Brunswick for major inspection on 20 April 1945. After a period of storage, during the mid-1960s it served with No 408 (P) Squadron, RCAF at Rockcliffe, Ontario, alongside the unit’s Avro Lancaster 10AR (Area Reconnaissance) aircraft. Sold off during 1961, it was registered CF-NJE and converted to a sprayer by Field Aviation at Calgary, who used it on pest control operations. It subsequently passed through the hands of several operators before being acquired by Buffalo in June 1996.