An artist’s impression of the revised second aircraft was first presented at the Zhuhai air show 2014.
All images via Chinese Internet unless noted

Following a report discussed in the October issue concerning the People’s Liberation Army Navy’s alleged dissatisfaction with the J-15 fighter and its intention to develop and introduce a new type for its future carrier fleet, several reports in western press were posted soon thereafter. A report published in Aviation Week noted “the Shenyang J-31 stealth fighter is once again on the menu for the Chinese military”. Despite Shenyang’s so far failed attempts to enter the extremely limited export market for fifth-generation fighters, this might change if the People’s Liberation Army Air Force (PLAAF) and People’s Liberation Army Navy (PLAN) are interested in developing the FC-31.

Even though the first prototype FC-31, side number 31001, was first flown about six and half years ago, very little information has emerged from the programme since then.

Dubbed as a lower-end complement to the larger, more-costly J-20, the FC-31 was never designated as the J-31 for service with the People’s Liberation Army Air Force; but was always more realistically expected as a likely candidate aircraft for the People’s Liberation Army Navy’s future carrier-borne fighter; one to supplement and later replace J-15 fighters currently used by embarked air wings on board the aircraft carrier Liaoning.

The FC-31 is a unique project: first mentioned in April 2011, when rumours suggested that the 601 Institute had been developing a fourth-generation medium multirole stealth fighter since 2007, after its own heavy stealth fighter design lost to the 611 Institute’s J-20 in an offcial request for proposal named XXJ. Note, in China this newgeneration aircraft is dubbed fourth- and not fifth-generation as is the case in the western world.

Originally, the FC-31 was revealed as a scaled-down model dubbed the F-60, unveiled during the first international UAV innovation Grand Prix held in Beijing during September 2011.

Around the same time, a full-scale metal mock-up was built, and in mid-2012 a so far unknown airframe was transported from the 623 Institute to the China Flight Test Establishment at Xi’an-Yanliang for static tests. Transportation of the mock-up was discussed in several Chinese forums, with the conclusion that the type was not another derivative of the Flanker but a new design.

Details known about the FC-31 to date show the type is offcially referred to as Project 310, initiated as a private venture by AVIC and SAC as the Advanced Fighter Concept (ACF) after the XXJ contest was over. The aim of Project 310 was almost certainly to retain certain design expertise and to promote the type on the international market as a low-cost alternative to the American F-35 Lightning II, and eventually as a candidate to replace some of the remaining J-7 and J-8 series fighters still in service with frontline PLAAF and PLAN units.

After the full-scale mock-up was built in 2011, construction of the first prototype must have begun later that year and was first spotted in a black colour scheme sporting a prominent Gyrfalcon logo on its tail, and the side number 31001 under its cockpit.

In contrast to the J-20, the first FC-31 is a much more conventional design – often mocked as a smaller clone of the F-22 Raptor – with twin engines and two large canted swept tailfins similar to the YF-22 demonstrator. However, in contrast to the F-22, the FC-31 features a diverter less supersonic inlet design, a two-piece canopy and a radome more akin to the F-35.

The pilot sits in an HTY-8 – a licenced copy of the Russian K-36D – ejection seat and the cockpit features wide-angle holographic HUD and at least four colour multifunctional displays. Most likely, the first demonstrator is not equipped with a full-up avionics suite. 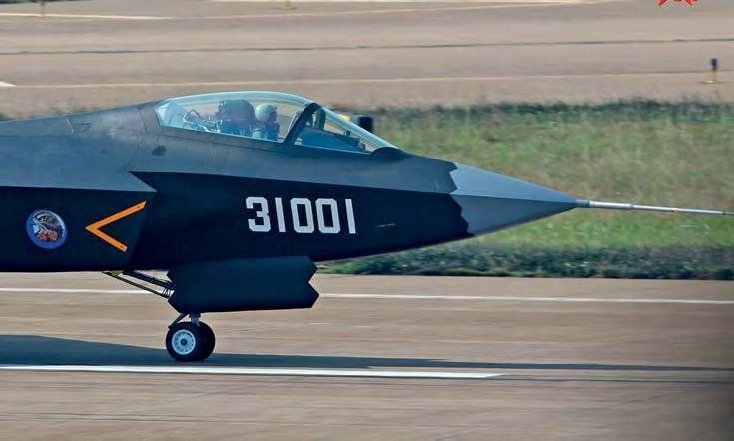 The first FC-31 demonstrator was unveiled during the Zhuhai air show 2014 proving China had become the second nation after the United States to have two stealth fighter designs in flight testing at the same time. 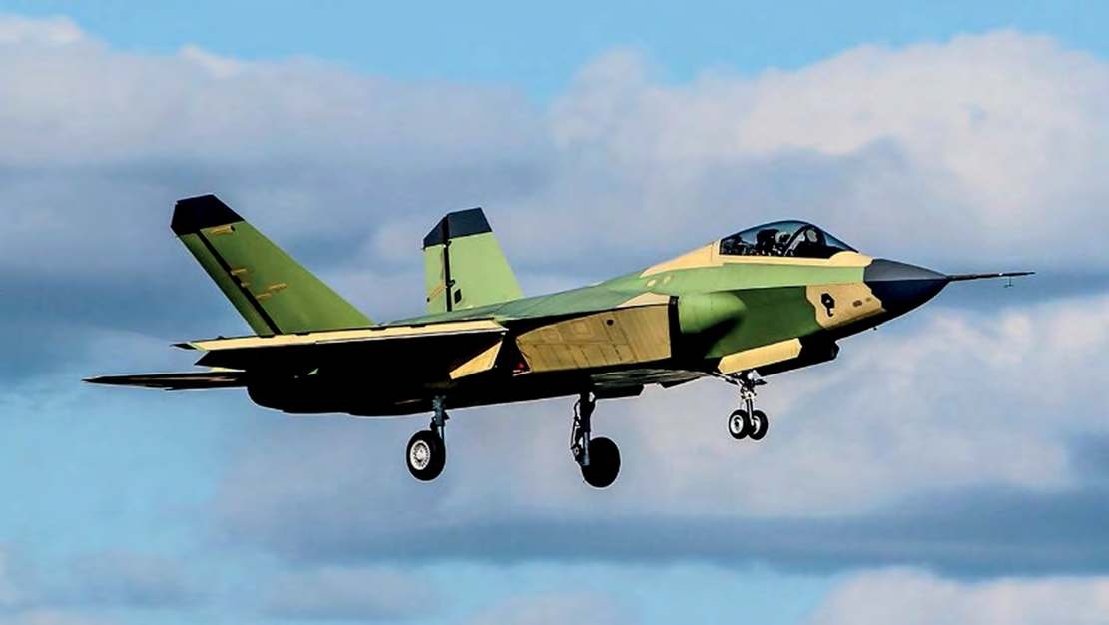 The second aircraft is conducting a flight test programme at SAC’s Shenyang- Beiling airfield, still unpainted. Even after two years of flight testing, only a few clear images have been released.

There are contradicting reports about the engine type; some assume standard RD-93s used by the JF-17, others assume WS-13 turbofans.

Rumours circulating on Chinese forums in 2016 suggested the People’s Liberation Army remained uninterested in the type, though reports persisted that a second airframe – sometimes called FC-31V2 – featuring major improvements (as displayed in model-form during the Zhuhai air show 2014) to make it more attractive to potential customers, would appear soon.

Improvements include a similar development to the J-20’s transition from demonstrator to prototype featuring a onepiece canopy, a reined, slightly longer and fatter fuselage, reshaped vertical tailins, and cropped wing and tailin tips.

Improved WS-13A or even WS-13E turbofan engines with stealthy nozzles are believed to be installed, an electro-optical targeting system turret itted under the forward fuselage, and a retractable IFR probe. A static test airframe was reportedly built by the SAC. 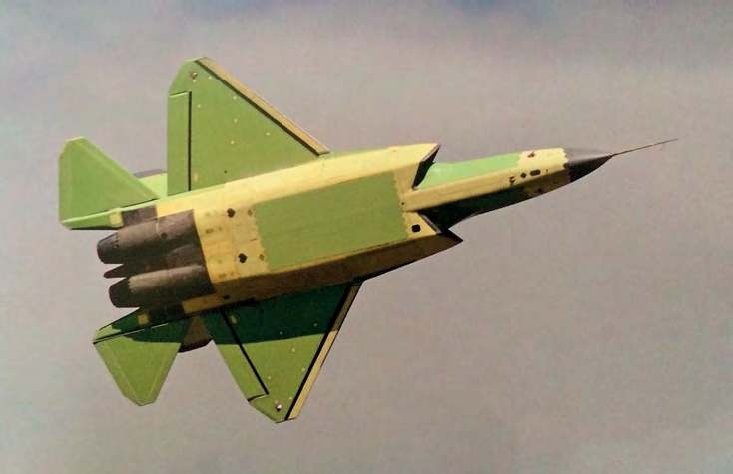 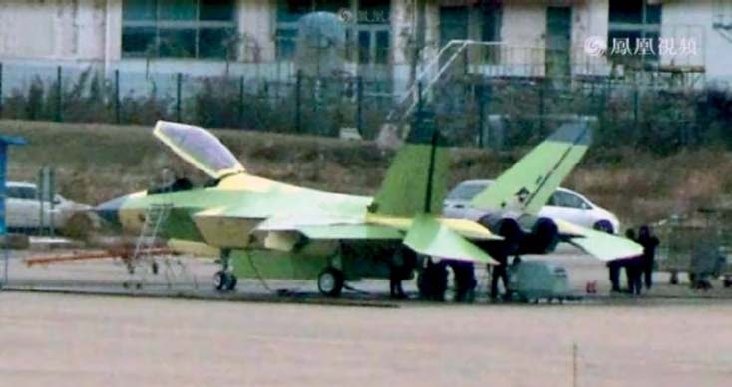 The FC-31V2 aircraft undergoing pre-flight checks on December 23, 2016, the date of its maiden flight.

The second prototype irst appeared on an AVIC promotional video shown at the Zhuhai air show 2016, showing the second airframe under construction and under preparation for the maiden light.

The irst prototype was reportedly itted with upgraded WS-13E turbofans and allegedly test lown for the irst time on July 1, 2016.

High-speed taxiing tests began on December 18, 2016 with the maiden light accomplished on December 23, 2016. Until this date, even oicial statements from AVIC – including their HP – state the FC-31 remains an AVIC/SAC project related only for the export market, stressing there was no PLAAF and PLAN backing or funding.

The second aircraft features several improvements including a one-piece canopy, a modiied cockpit with a new head-up display similar to the one installed in the J-20, a reined fuselage comprising more composite material, reportedly with a slightly bigger internal weapon bay, a reined, larger wing, and reshaped vertical tailins more akin to the F-35 with cropped tips similar to those on the F-22.

Details released about the FC-31’s internal weapon bays, provide no conirmation they are capable of holding up to six air-to-air missiles including the PL-10, PL-12 and PL-15, though its size does not look any larger than the J-20’s main weapon bay.

The FC-31 is expected to have greater mission focus on strike and surface attack and is likely to internally carry a new class of GPSguided bombs and the GB50 laser-guided bomb. Based on their physical size, larger, heavier weapons like the YJ-83K anti-ship missile or the YJ-91 anti-radar missile must be carried externally on six underwing hard points. 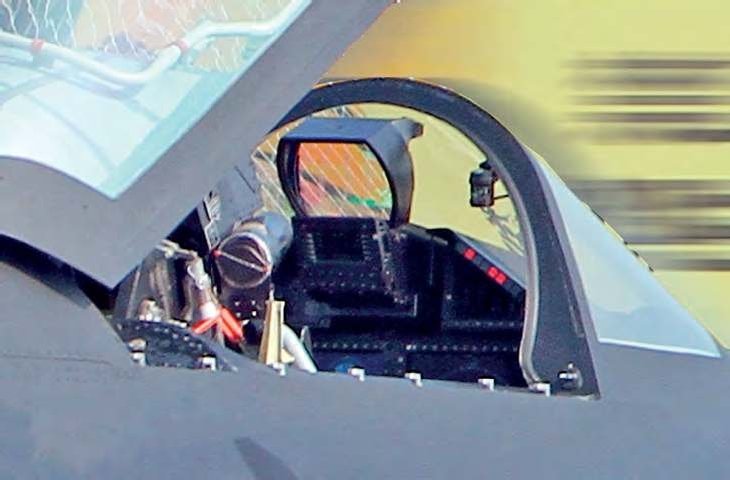 A rare glimpse to the FC-31V1’s cockpit showing a modern layout with large multifunction displays and a wide-angle head-up display. 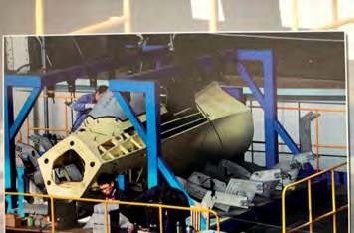 Only a few images of the FC-31V1 under construction have been released.

An internally mounted cannon is not expected to be installed, and despite the mock-up featuring provision for a nosemounted infrared search and track sensor and distributed electro-optical sensors about the fuselage, in the FC-31’s current test-phase, the second aircraft lacked any such systems.

Since its maiden light in 2016, the second FC-31 prototype has continued to be lown at SAC as part of the ongoing light test programme. 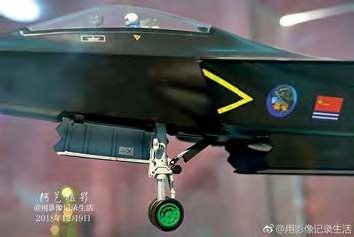 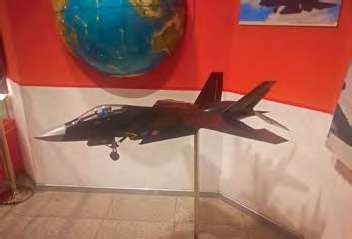 The future variant’s form is unknown though several artist impressions have been posted on Chinese forums. The most credible source is a black coloured model of the naval variant featuring folding wings and an arrestor hook exhibited in SAC’s showroom.

In October 2018, claims posted on Chinese forums suggested that a much redesigned variant – sometimes referred to as the FC- 31V3 – has been selected by the People’s Liberation Army Naval Aviation as its next generation carrier-based ighter. Furthermore, possible designations emerged as J-35 for the naval variant and J-31 for the air force version.

This alleged change is interpreted by most analysts as a signal that SAC has received funding from the PLA to continue the FC-31’s development in order to decide on its formal programme status, and not as an order.

Following rumours irst emerged in January 2018, that 601 Institute and SAC are currently working on an enlarged carrier-based variant, which might be unveiled in 2019. This third prototype will initially be powered by the indigenous WS-13A turbofan and later by the new WS-19, which is a 21,000lb-class (93.4kN) medium thrust engine; the aircraft’s projected max take-of weight is slightly more than 30,000kg (66,000lb).

Since late 2018, reports in the Chinese press state an undisclosed nation in the Middle East and Pakistan are both interested in the type. 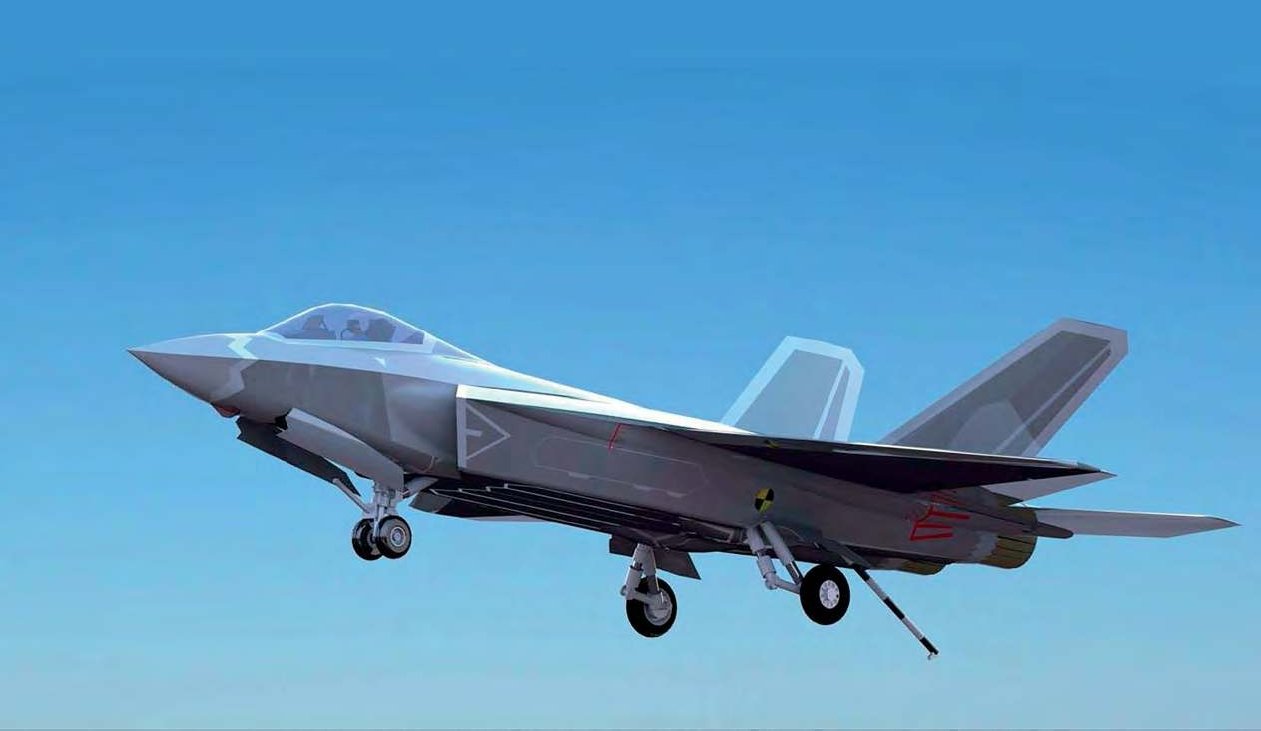