The recent transatlantic crossing by GA-ASI’s company-owned MQ-9B SkyGuardian was the ffirst time a medium-altitude long-endurance remotely piloted aircraft system had made the journey.
GA-ASI

The aircraft was a companyowned MQ-9B aircraft, dubbed SkyGuardian, and the event also marked the first Atlantic crossing made by a medium-altitude longendurance (MALE) platform.

The aircraft, registered N190TC, departed from Grand Forks, North Dakota on July 10 and arrived at RAF Fairford, Gloucestershire, on July 11. During its stay in the UK, the aircraft participated in the static display during the 2018 Royal International Air Tattoo, held between July 13 and 15, 2018.

Linden Blue, GA-ASI Chief Executive Oicer said: “This historic event was a demonstration of the endurance and civil airspace capability of the MQ-9 SkyGuardian and it is itting to do this as part of the centennial celebrations of the Royal Air Force …The successful flight of the MQ-9B is the culmination of the hard work and innovation of our dedicated employees, and the strong relationships that we enjoy with the RAF, the UK Civil Aviation Authority, the Royal International Air Tattoo and our UK industry partners, such as Cobham.”

GA-ASI has named the baseline MQ-9B variant SkyGuardian and the maritime surveillance variant of the aircraft is known as the SeaGuardian.

The UK is purchasing the MQ-9B for the RAF and it will be known as the Protector RG.1 in service.

The transatlantic deployment was supported by Inmarsat’s L-band satellite communications (SATCOM) service, known as SwiftBroadband, which provided back up connectivity during the flight.

Chief Commercial Oicer of Inmarsat Government Kai Tang said: “Reliable SATCOM is a critical enabler for any mission and this transatlantic flight test has vividly highflighted its importance.”

The MQ-9 also recorded two further milestones at the Farnborough International Airshow in July, with the announcement of a sale to the Royal Netherlands Air Force and news that the baseline platform will be provisioned for both US and European satellite navigation systems.

On July 17, 2018, GAASI announced that it has been selected to provide UAS capability to the Royal Netherlands Air Force. Speaking at Barnborough, Linden Blue said the company will provide an unspeciied number of Predator B/MQ-9 Reaper MALE systems to the Dutch Military: “We are extremely pleased to have the opportunity to meet the UAS requirements of the Royal Netherlands Air Force. We are committed to providing a NATO-interoperable solution that enhances the ISR capabilities of the Netherlands and the Alliance.”

Also, at Farnborough, the company announced that it will ofer both the US GPS and European Galileo satellite navigation systems. The baseline MQ-9 was designed with a triplex navigation system based on GPS, but the Galileo capability is to be added to increase lexibility for operating customers around the world.

David R Alexander, GA-ASI’s president, Aircraft Systems, said: “Many of our US and international partners have plans to produce multi-constellation navigation receivers. These receivers will add to the lexibility of the MQ-9B and will beneit our international and domestic customers, especially those based in Europe.”

He added that GA-ASI believes that having multiple satellite options is important for customers who desire the capability of switching between systems, should access to one or the other be lost or denied. 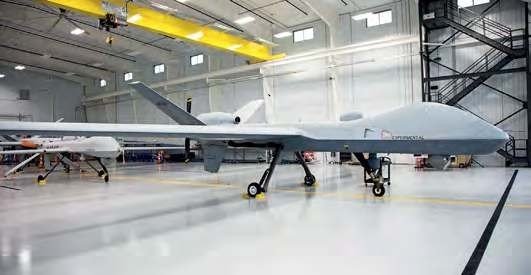 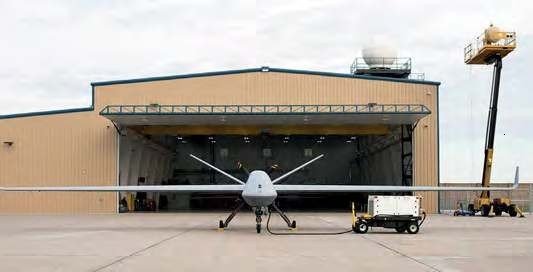 The SkyGuardian departed from Grand Forks, North Dakota, and crossed the Atlantic in 24 hours and two minutes. Following its arrival at RAF Fairford on July 11, it was displayed in the static aircraft park during the 2018.
GA-ASI