The Leonardo M-346 lead-in fighter trainer (LIFT) is today operated by four air forces (68 aircraft ordered so far, in service since 2013, more than 21,000 hours flown). It has already collected positive feedback from all the pilots that have had the opportunity to fly it.

It is well known that it offers excellent performance, and in some respects more than the needs of advanced training. In some parts of the flight envelope, the M-346 has the same performance as the F-16.

The Aeronautica Militare (Italian Air Force) already uses the type as an aggressor aircraft for air-to-air combat training with F-2000 Typhoons, and the T-346As from 61° Stormo have been invited more than once to the Tactical Leadership Programme at Albacete in Spain to play the adversary (Red Air) role. The Israeli Air and Space Force was positively surprised by the performance of its M-346I Lavi, and it is planning to use it to equip its adversary unit, the Flying Dragon Squadron at Ovda. However, the M-346 was born as a pure trainer, with the capability to use its embedded simulation to fly pre-operational training missions in air-to-air or air-to-ground roles.

The M-346 has some very advanced features, such as a fourth-generation fighter cockpit (with three large multifunction displays plus a head-up display in both front and rear seats), a helmet-mounted display, night vision goggles, voice-adapted cockpit and in-flight refuelling capability.

From the beginning some possible customers requested that the M-346 be armed. This was a specific request of the United Arab Emirates. In February 2009, it announced it would have selected the M-346, but because it wanted part of its contract for 48 aircraft to be formed by combat-capable aircraft – an option not available on the M-346 at the time – the UAE contract was never signed.

Nevertheless, the M-346 was designed so the aircraft could be evolved to become combat-capable: for example, the electrical system was sized so it could power a radar system and the nose was designed to be large enough to accommodate a Grifo radar unit.

Considering the requests coming from other possible customers, Leonardo finally decided to further develop its product and it started a programme that was unveiled at the Farnborough Air Show in July 2016. The M-346FT (Fighter Trainer), directly derived from the Advanced Jet Trainer version, is a dual-role model, able to be used as a trainer and as a combat aircraft with no modification apart from the external stores. The M-346FT introduces a series of specific equipment, such as weapons, external pods and a self-defence suite. 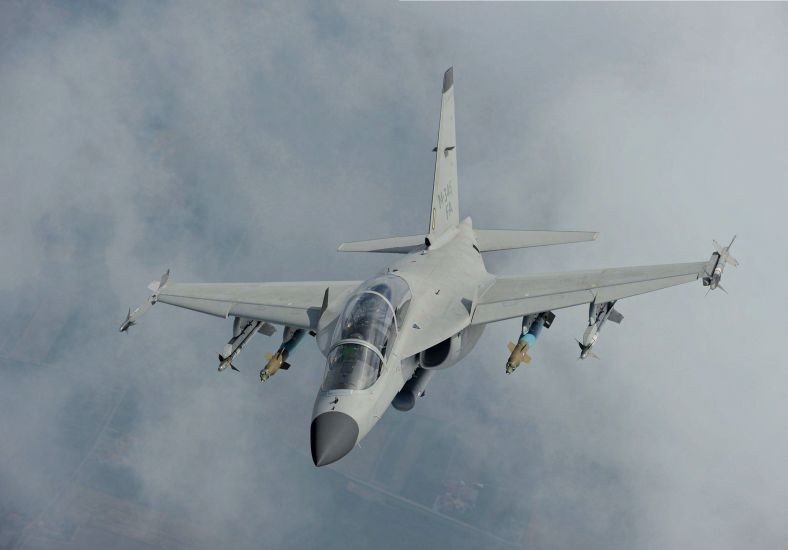 M-346FA demonstrator CSX.55219 on a photo flight from Venegono.
All images Leonardo 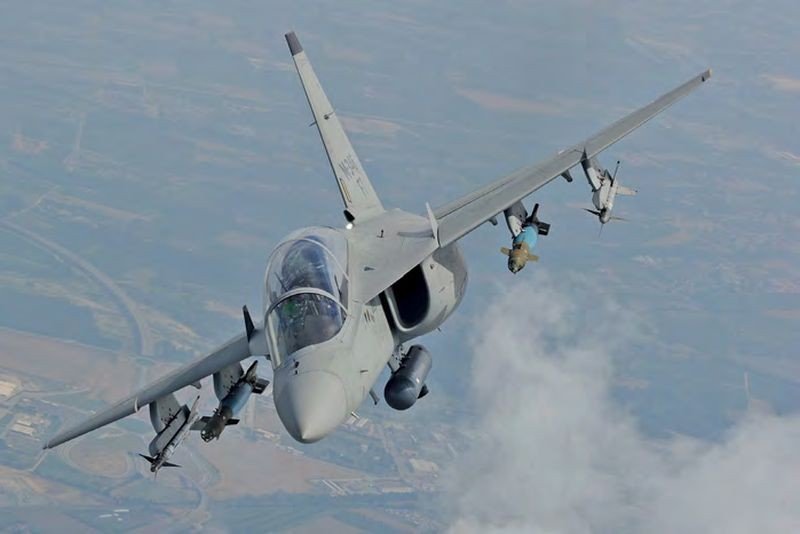 The dual-role M-346 has a strengthened airframe, above all in the wing and rear sections, and wingtip missile launchers for air-to-air weapons, which bring the number of hard points to seven. It will be able to employ precision-guided munitions, carry reconnaissance and targeting pods, have a complete defensive air subsystem (DASS) suite and a Link 16 datalink. (It will also be able to use a non-NATO datalink, if requested by a customer.)

The only difference between the M-346FT and the M-346FA is the presence of a fire control radar system on the M-346FA model. At the beginning, the avionics architecture of the M-346 didn’t allow the integration of a radar system together with the embedded training simulation capability. Now, thanks to a new distribution of the black boxes, the system has been developed to allow that integration and give a real multirole capability that can be used with no modification for training or combat missions. In future, all M-346s will be produced with the strengthened airframe and the MILSTD- 1553 and MIL-STD-1760 data bus.

The radar system to be integrated in the aircraft is the Grifo-346, a version of the multimode pulse-doppler TX200W Grifo, produced by Leonardo Divisione Elettronica (the former Selex ES) that so far has already collected ample sale successes all over the world.

The Grifo-346 will have an M-scan optimised antenna with integrated identification friend or foe, and the capability to track up to ten targets (eight displayed) in track-while-scan mode. The maximum range in look-up mode will be more than 50nm (92km) and the resolution in synthetic aperture radar (SAR) mode is indicated as less than 1m (3ft).

The Grifo-346 will have seven air-to-air modes, six for air combat, 13 for air-toground (including SAR and inverted SAR, ground moving target indicator on SAR, and sea moving target track), and finally three for navigation, comprising beacon, weather and terrain avoidance. The selected targeting pod is the Rafael Litening, while the reconnaissance pod is the Rafael RecceLite, which has already been integrated into the aircraft.

Besides the 630-litre (138-gallon) auxiliary tanks, which can be attached to three wet pylons (the inner wing pylons, and the centreline), Leonardo foresees the integration of 500lb (226kg) Mk82 bombs (slick or Snakeye), laser-guided bombs (GBU-12 Paveway II, GBU-49 Enhanced Paveway II and Lizard 4), and GPS-guided bombs such as the GBU-38 Joint Direct Attack Munition and Lizard 2.

Weaponry will also include infraredguided AIM-9L Sidewinder air-to-air missiles (and probably also IRIS-T missiles), rocket launcher pods for guided and non-guided rockets, a M-3M 12.7mm gun pod and an NC-621 20mm gun pod. The total external load will be around 2,000kg (4,405lb). The DASS will be formed by an Elisra SPS-45V5 system, including a radar warning receiver and a chaff and fiare dispenser system, plus a Saab MAW-300 missile approach warning system with six sensors to cover 360o. 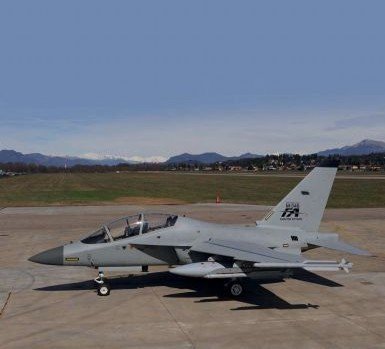 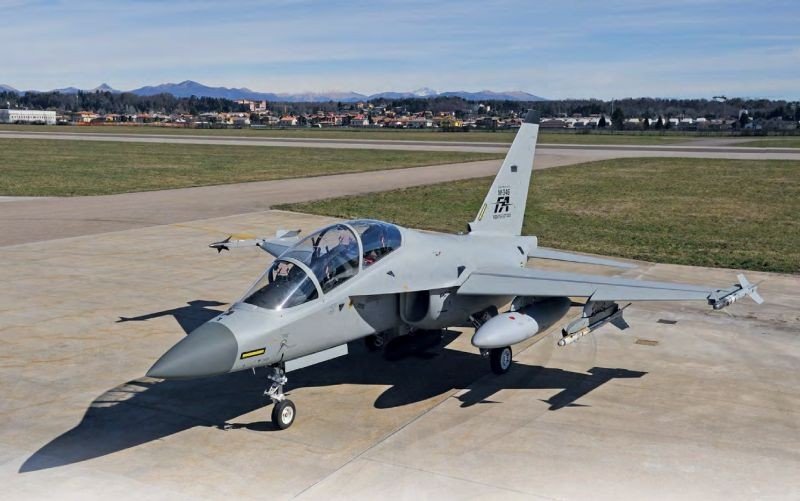 Leonardo will also offer customers the option of integrating an electronic countermeasures (ECM) jammer pod, and a kit to reduce the radar cross-section.

According to the company, in air-to-air missions the M-346FA can be equipped with four AIM-9L missiles, two external fuel tanks, one ventral pod and a gun or an ECM system. In this con guration, with a takeoff weight of 9,700kg (21,365lb) including 3,015kg (6,640lb) of fuel and one pilot on board, the aircraft can carry out a twohour combat air patrol mission at 35,000ft (10,668m) at 100nm (185km) from the home base, with a total mission time of two hours and 40 minutes. Of course, the possibility of in-flight refuelling can considerably increase the mission time.

Leonardo suggests that for a reconnaissance mission, the aircraft can be loaded with one reconnaissance pod on the centreline, two auxiliary tanks and two AIM- 9L missiles. With a take-off weight of 9,440kg (20,793lb), including 3,015kg (6,640lb) of fuel, the M-346FA can fly a hi-lo-hi mission of two hours and 25 minutes to a target 480nm (889km) from the home base.

These capabilities are added to all that the M-346 can already offer today, as an aggressor aircraft for air-to-air combat and a ‘companion trainer’ for the continuation training of combat-ready pilots to maintain their airmanship and mission management skills.

The M-346FA has all the possibilities to be not only a LIFT trainer, but also a capable combat aircraft, able to fly operational missions with reduced costs compared to those of the frontline ghters.

In Italy, some consider the M-346 the possible successor of the AMX. In recent years, the overseas commitments of the Aeronautica Militare in asymmetric international and coalition combat operations centred around light missions that are not very demanding from a pure combat point of view. In Afghanistan as well as in Kuwait, the Aeronautica Militare Task Force Air at rst operated the Tornado, but after a short time the big and expensive twin-engine ghter-bomber was successfully replaced by the cheaper AMX, for both CAS and reconnaissance missions.

Compared to the AMX the M-346FA has similar payload capability, but has a superior DASS and, above all, a re control radar: game-changing equipment. In future, it could be interesting for the Aeronautica Militare to consider introducing into service a number of M-346FAs, which could be very useful in reconnaissance missions (especially for the re-equipment of 132° Gruppo, today the only AMX squadron in service) and also for lowcost light combat and air policing missions. 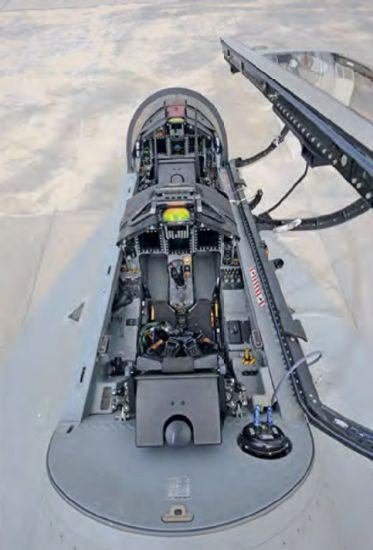 In the Aeronautica Militare’s original plans, 109 F-35 Lightning IIs (both A and B models) were to be acquired, which were destined to replace both the Tornado and AMX fleets in six squadrons. Today that number is no longer considered. It is probable that no more than 75 F-35s will be acquired, if not fewer, equipping no more than four squadrons.

Considering this and the operating costs of keeping both the Typhoon and F-35 fleets in service and the always-squeezed Italian defence budget, it would be sensible to think the M-346FA might complement the F-35 fleet, proving useful in all undemanding commitments and for continuation training of frontline pilots. The M-346 is already in service, so the addition of the M-346FA would not burden the logistics and technical support services with a new fleet.

Similar considerations could be made by other air forces in need of a new advanced trainer, but which want to get the maximum from that type and operate it as a light combat aircraft and an aggressor and companion trainer that can create cost reductions and operational life savings of front line ghters. This is an opportunity that should open (or reopen) new markets for Leonardo.