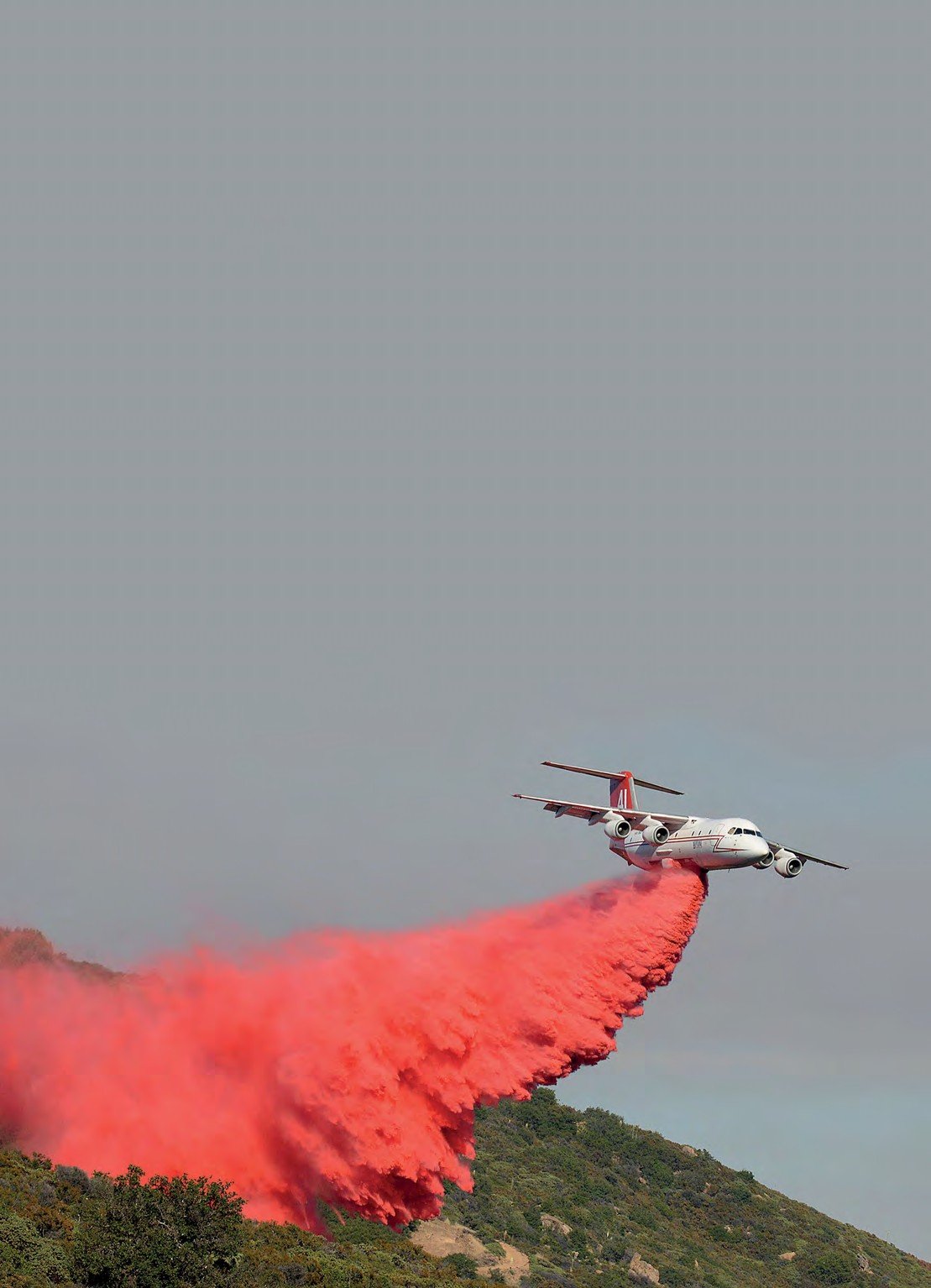 THE BAE 146/Avro RJ Airtanker will again play a central role in fighting wildfires in the United States this year after the United States Forest Service (USFS) signed contracts for these Large Air Tanker (LAT) aircraft, it was announced during the recent International Aerial Firefighting Conference at McClellan Field in Sacramento, California (see p18 for a report from the event).

Budget cuts mean the USFS is cutting the number of LAT aircraft on Exclusive Use contracts from 20 to 13, but eight of those aircraft will be BAe 146/Avro RJ Airtankers (four aircraft from Conair/Aero Flite Inc and four from Neptune Aviation).

BAe 146/Avro RJs Airtankers will also form the bulk of the 11-strong force of LATs to be operated on Call When Needed contracts. Conair/Aero-Flite and Neptune will again each provide four aircraft for these contracts.

The contracts for Conair/ Aero Flite and Neptune follow a very busy 2017, during which these aircraft were a key part of the emergency services’ efforts to tackle huge blazes that swept through California and Oregon and made 2017’s wildfire season the most destructive on record in the United States.

According to the California Department of Forestry and Fire Protection, 9,133 fires burned 1,381,405 acres (559,034ha). Forty-six people died, including one fire-fighter, with a further 199 civilians and 12 fire-fighters injured and 32,000 homes, 4,300 businesses and more than 8,200 vehicles, boats, farm vehicles and other equipment destroyed.

The fires included the Thomas Fire in Ventura County, which became California’s largest modern wildfire, engulfing an area larger than the Washington DC metropolitan conurbation. BAe 146/Avro RJ Airtankers played a prominent role in the efforts to fight these fires.

Such was the scale of the fires that between October 10, 2017, and January 12, 2018, the Missoula, Montanabased Neptune sent its entire complement of nine BAe 146 Airtankers to respond, with the fleet going on to fly 187 more missions which dropped a further 561,000 US gallons (2.1 million litres) of retardant.

In addition to the operations in the United States, Neptune last year sent a BAe 146-200 Airtanker to support wildland fire-fighting efforts in Chile, and Conair/Aero Flite, based in Abbotsford, flew 150 missions, delivering 173,981 US gallons (658,590 litres) of retardant in response to wildfires in Canada. Conair/Aeroflite also sent an Avro RJ85 Airtanker to Australia to fight wildfires under contract to the State of Victoria.

Neptune and Conair/Aero Flite have used BAe 146-200/Avro RJ Airtankers for some years now; set to join them in the operator base soon is Air Spray. This Alberta, Canada-based company has been in operation since 1967. It has L-188 Electras, Fire Boss, Air Tractor AT802F and Turbo Commander 690s in its fire-fighting fleet and is preparing to conduct trials with its first converted BAe 146-200 Airtanker.

Air Spray began conversion work in 2014, but only now is the aircraft’s new Internal Retardant Delivery System (iRADS), which was demonstrated during AFF at McClellan, now ready for drop tests. Air Spray is converting a second BAe 146-200 with iRADS, which is a computerised constant/ variable flow delivery system, and three others will follow to eventually give the operator a five-strong BAe 146-200 Airtanker fleet.

Drop tests were due to take place in April at the USFS grid pattern testing site at Fox Field in Lancaster, southern California.

Completion of these tests is required for the approval of aerial delivery systems by the USFS Interagency Airtanker Board, which governs the safety, effectiveness and efficiency of air tankers and heli-tankers.

This is not the only development with these regional jets’ fire-fighting role. Neptune Aviation has recently acquired an Avro RJ100 to pursue what BAE Systems calls “a research and development project”. Research shows this aircraft to be a former Swiss International Air Lines RJ100, HB-IXQ (c/n E3282), which in February 2018 was registered in the United States as N479NA.

There may yet be further developments in the story of these legacy British regional jets finding a new role in fighting wildfires. Mark Broadbent