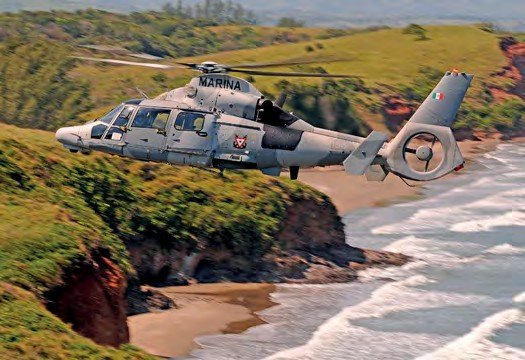 AS565MBe Panther serial number ANX-2156 is the sixth such type in service with the Aviación Naval Mexicana.
Anthony Pecchi/Airbus Helicopters

Airbus Helicopters announced on December 6, 2017, it had delivered the last pair of AS565MBe Panthers (serial numbers ANX-2159 and ANX-2160) to the Aviación Naval Mexicana (Mexican Naval Aviation) in a ceremony at Marignane, France.

The Aviación Naval Mexicana became the launch customer for the latest version of the Panther with an order for ten helicopters in 2014. The first four aircraft were delivered in 2016 with the remainder following throughout the course of 2017.

The AS565MBe is equipped with a cargo hook, rescue hoist, a forward-looking infrared (FLIR) system and four stretchers for the MEDEVAC role. The helicopters are based in Veracruz, Sonora and Michoacán states under the control of Escuadron Aeronaval 123 and are used in the maritime search and rescue, and training roles.

It is a modern, multi-mission helicopter that we can use in both maritime and land environments for a wide range of missions, including maritime SAR, disaster relief, external load operations and even air ambulance.” Nigel Pittaway