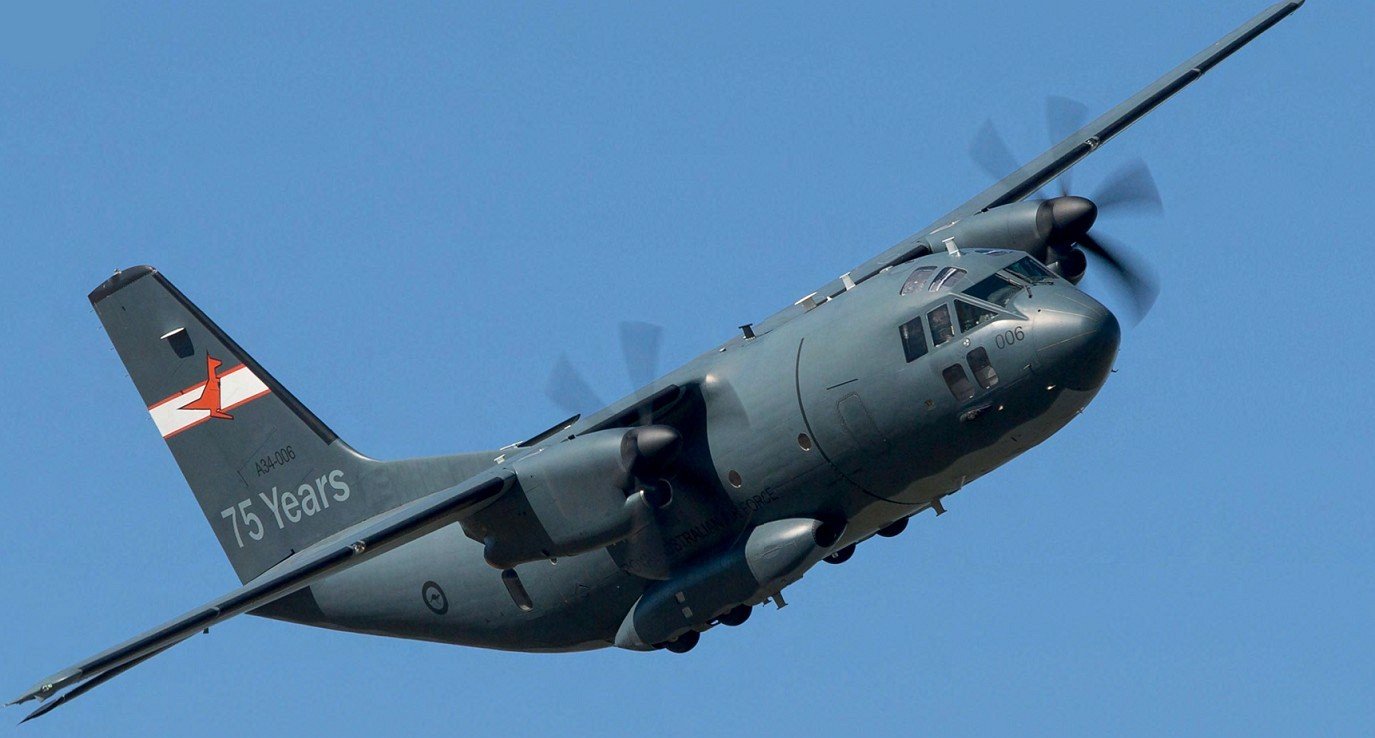 To mark 75 years since the establishment of 35 Squadron, an anniversary tail flash has been applied to C-27J Spartan transport aircraft A34-006. Formed at RAAF Base Pearce on March 11, 1942, 35 Squadron has provided airlift to a range of operations throughout its career, and today is based at RAAF Base Richmond. The tail flash includes a high-visibility orange wallaby, similar to that worn by the squadron’s DHC-4 Caribou transport aircraft during the 1970s, 1980s and 1990s.
Flt Sgt Glen McCarthy/ Royal Australian Air Force

SIGNIFICANT MILESTONES in Royal Australian Air Force capability occurred in April and May, with the arrival of the final C-27J Spartan, the first deployment of the P-8A in anger and the delivery of critical training infrastructure for the F-35A Lightning II.

Australia has been re-equipping the Royal Australian Air Force fleet with network-capable platforms over the past few years, and by the time the ‘Classic’ F/A-18 Hornet fighter fleet is withdrawn in the 2022-2023 timeframe, the oldest aircraft in service will be the Lockheed Martin C-130J-30 Hercules.

The tenth and last Leonardo C-27J Spartan for the Royal Australian Air Force’s 35 Squadron (A34-010) arrived at RAAF Base Richmond, New South Wales, on April 2, 2018, following a five-day transpacific ferry flight from Waco, Texas. The aircraft are being acquired under Australia’s $1.4 billion Project Air 8000 Phase 2 (Battlefield Airlifter) programme and the final delivery marks an important milestone between initial operational capability, which was achieved in December 2016, and final operational capability (FOC), due at the end of 2019.

The final delivery was marked by a ceremony at Richmond on April 18, 2018, attended by senior Royal Australian Air Force officers and VIPs, including Defence Minister Senator Marise Payne.

Wing Commander Ben Poxon, Commanding Officer of 35 Squadron, explained: “It was really important for us to mark the occasion of having a complete fleet of ten aircraft, which is part of our requirements for FOC; but it wasn’t just the arrival of the last aircraft which was significant, it is also a mark of the maturity of the capability, from the first delivery in June 2015 to the present day’.

The next milestones for 35 Squadron will be the test, evaluation and validation to be carried out in conjunction with two of the Australian Defence Force’s major exercises between June and August.

The first is Exercise Hamel, the Australian Army’s major land forces exercise, and the Spartan will operate from austere airfields within the Shoalwater Bay Training Area in central Queensland, with little or no support from a main operating base.

During Hamel the aircraft are likely to be placed under the direct command of the Land Forces Commander, similar to the way the Australian Army operates its CH- 47F Chinook and MRH90 battlefield helicopters, but a major shift from traditional fixed-wing air mobility tasking.

The second exercise for the Spartan will be Pitch Black, the Royal Australian Air Force’s premier multilateral air defence exercise. During this exercise the aircraft will be based at a remote airstrip at Batchelor in the Northern Territory, which is not capable of taking larger aircraft. The Spartan will be integrated into the larger air battle via a Tactical Unit Headquarters in Darwin, but will primarily continue testing and validation of the GPSassisted Joint Precision Air Drop System capability and high-altitude air drop work.

Wing Commander Poxon said: “If I could classify the two exercises, overall Hamel is our operational test and evaluation and validation of operations in a semi-permissive environment, which includes the resupply of troops in the field on a continuous basis; and at Pitch Black we’ll be investigating higherend capabilities inherent in the C-27J surrounding precision air drop’.

The aircraft is part of Australia’s contribution to maintaining economic and diplomatic pressure on North Korea.

Group Captain Darren Goldie, Officer Commanding No.92 Wing, 11 Squadron’s parent organisation at RAAF Base Edinburgh in South Australia, explained: “Current operations and exercises are providing an excellent opportunity to integrate the aircraft into Australia’s Command and Control architecture, but also to begin working more effectively with some of our international partners’. 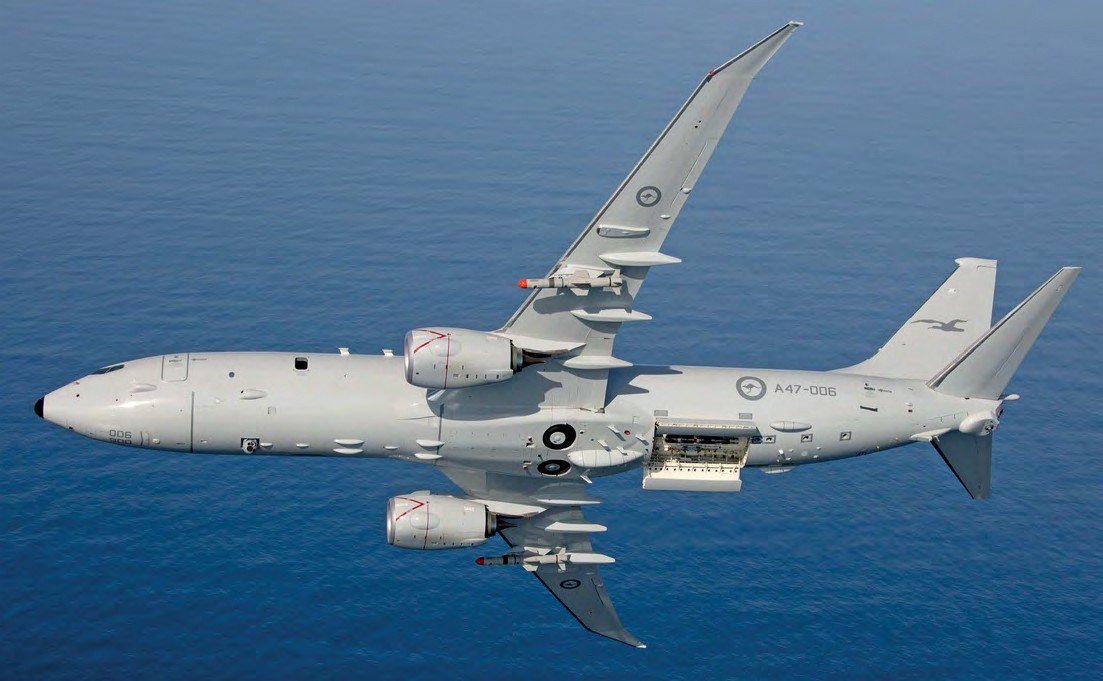 Approximately six of the 19 Orions remain in service, with 10 Squadron at RAAF Base Edinburgh, but the type is due to be retired from service at the end of 2018.

The Poseidon achieved initial operational capability in February 2018 and the next milestone will be the beginning of aircrew and maintenance training at Edinburgh in July. This training has previously been undertaken by the US Navy at Naval Air Station Jacksonville, Florida and the final Royal Australian Air Force course in the United States is currently underway.

The first delivery of training equipment for the Royal Australian Air Force’s F-35A Lightning II fighters arrived at RAAF Base Richmond, New South Wales, on May 2, 2018.

The equipment included an Ejection Systems Maintenance Trainer and a Weapons Load Trainer and arrived at Williamtown from the UK aboard an Antonov Airlines An-124-100 Ruslan freighter.

It will be installed in the F-35A Integrated Training Centre now nearing completion at Williamtown, which will be home to No.2 Operational Conversion Unit, the Royal Australian Air Force’s F-35 training organisation.

Australian Defence Minister, Senator Marise Payne said: “The equipment delivered today will provide Australia with its own F-35 pilot and maintainer training capability and will form part of the overall Australian F-35 training system. Importantly, this equipment will enable our pilots and crews to train without having to remove aircraft from flight schedules’.

Further deliveries to Williamtown during the course of 2018 will include the first of two Full Mission Simulators. Minister Payne added: “This is an important milestone with two of Australia’s F-35A aircraft to be based at RAAF Base Williamtown from December 2018 and pilot training expected to commence at Williamtown from mid-2019’.