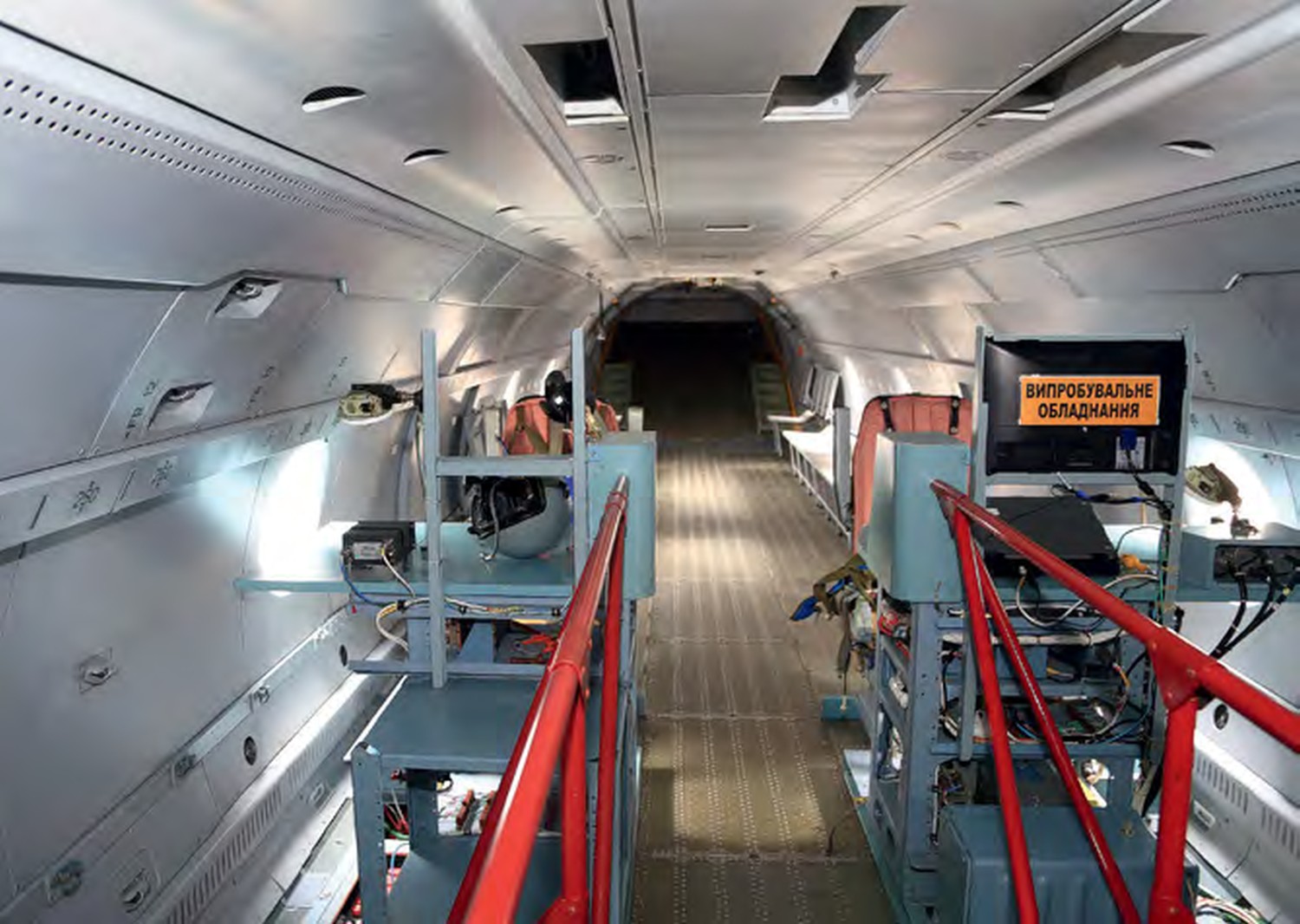 Various testing equipment has been fitted inside the aircraft’s cargo cabin.

During the entire duration of the flight, the An-132D was joined by the An-178 prototype UR-EXP (c/n 001) in the role of chase plane. Taking off from Kiev-Gostomel some ten minutes earlier, the An-178 appeared over Kiev-Svyatoshino on time to start following the An-132D’s take-off.

Despite overcast skies and rain, the whole process went smoothly and Antonov’s test pilot Viktor Goncharov, the crew captain, reported that everything went as planned, without any problems.

From now on, Kiev-Gostomel is the new home of the An-132D prototype and most of the subsequent test flights are to be carried out from there. After their successful completion, the An-132D prototype is expected to be flown over to Saudi Arabia by mid-May to perform further test and demonstration flights there.

The An-132D is the demonstrator (hence the letter D in its designation) for a planned An- 132 medium multipurpose transport aircraft that has been under joint development by Ukraine’s Antonov and Saudi Arabia’s King Abdulaziz City for Science and Technology companies since April 2015. A second Saudi Arabian company, Taqnia Aeronautics, joined the project in May 2015. Its task is to organise the series production in Saudi Arabia and it will also be in charge of the marketing and sales of the aircraft. 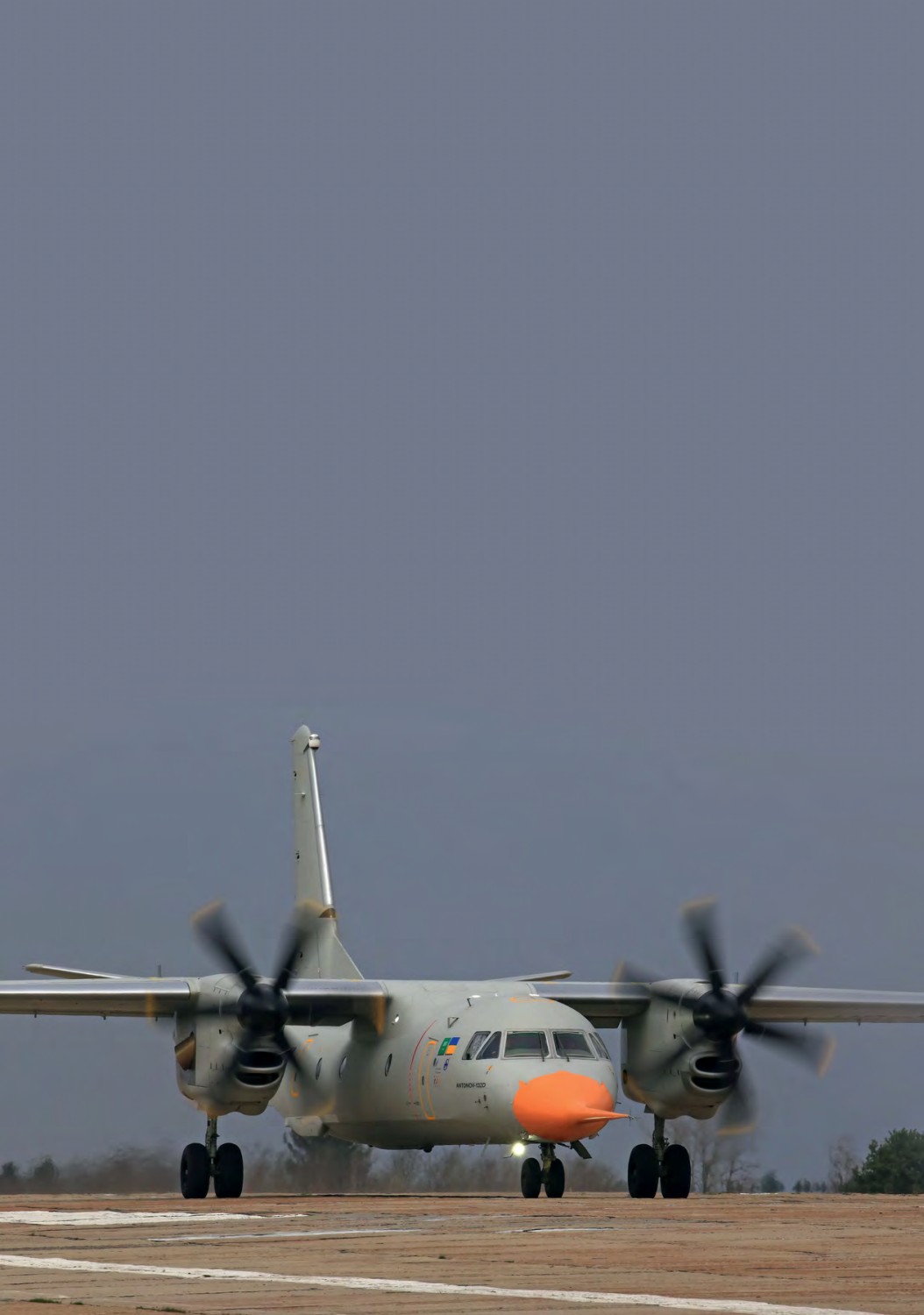 The An-132D prototype taxies down the runway in preparation for takeoff on its maiden flight from Kiev-Svyatoshino Airport on March 31. All photos Sergey Smolentsev 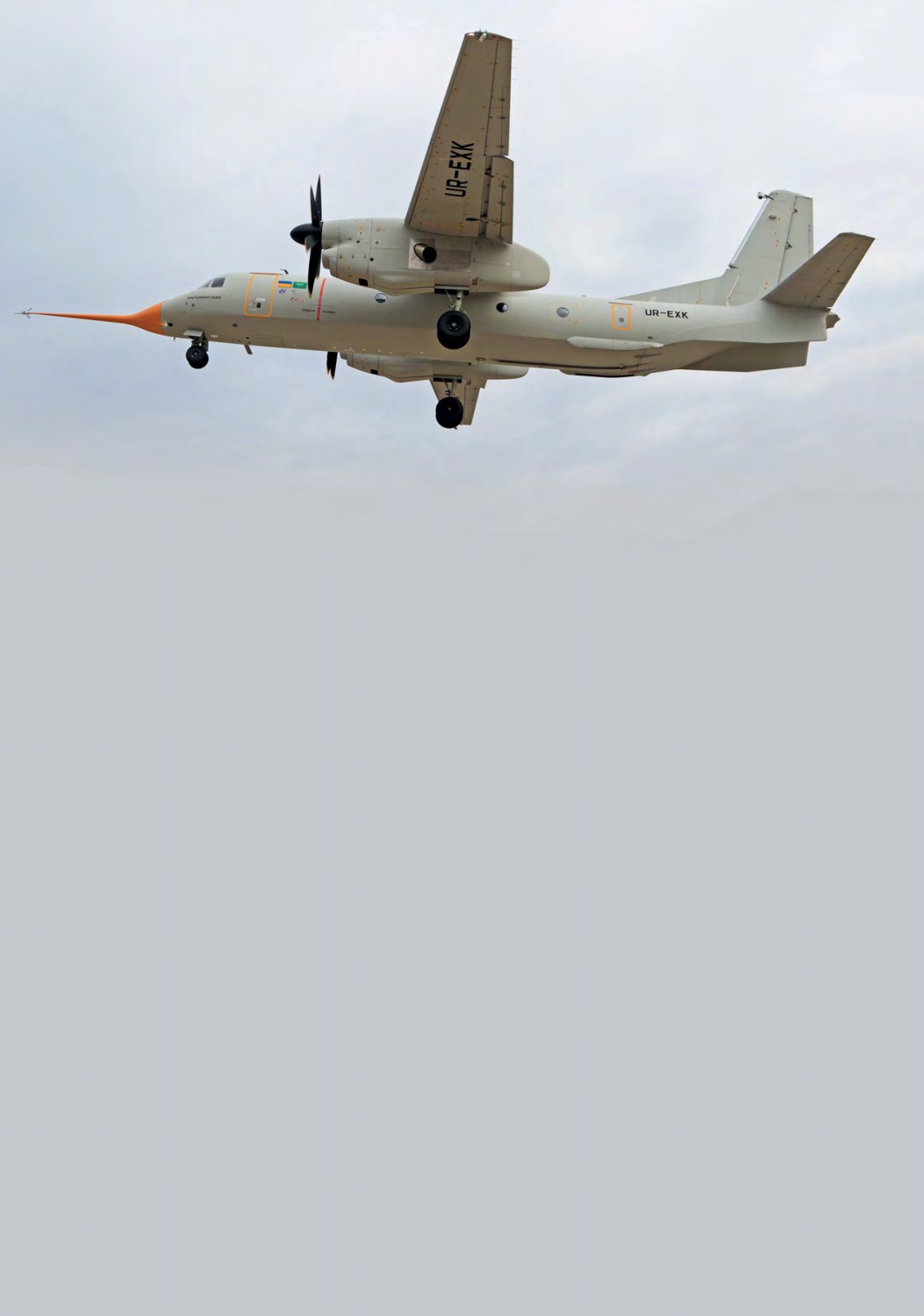 Note the orange nose radome fitted with flight testing instruments, as well as the various cameras on the wingtips and tail top.

After successful testing of the An-132D, initial production of the type is expected to begin at Antonov’s main plant in Kiev. In the meantime, a second production plant is expected to be built in Saudi Arabia by Taqnia Aeronautics, after which both plants will continue to produce the An-132 simultaneously.

Antonov is expected to offer the aircraft to its traditional customers in Latin America and Asia while Taqnia Aeronautics is to market to customers in the Middle East. The An-132 is aimed at replacing earlier Antonov designs such as the An-26 and An-32, as well as Western designs in the same class like the Alenia G222 and CASA CN235. Expected combined output is projected at 260-295 aircraft by 2035, at a price of $30–40 million per aircraft.

Saudi Arabia alone is expected to acquire approximately 80 aircraft in different subvariants. Its Ministry of Defence signed a Memorandum of Understanding with Antonov and Taqnia Aeronautics in November 2015 for the initial acquisition of six aircraft. Four of these are expected to be fitted for search and rescue and maritime patrol operations, the remaining two being specialised electronic warfare variants. 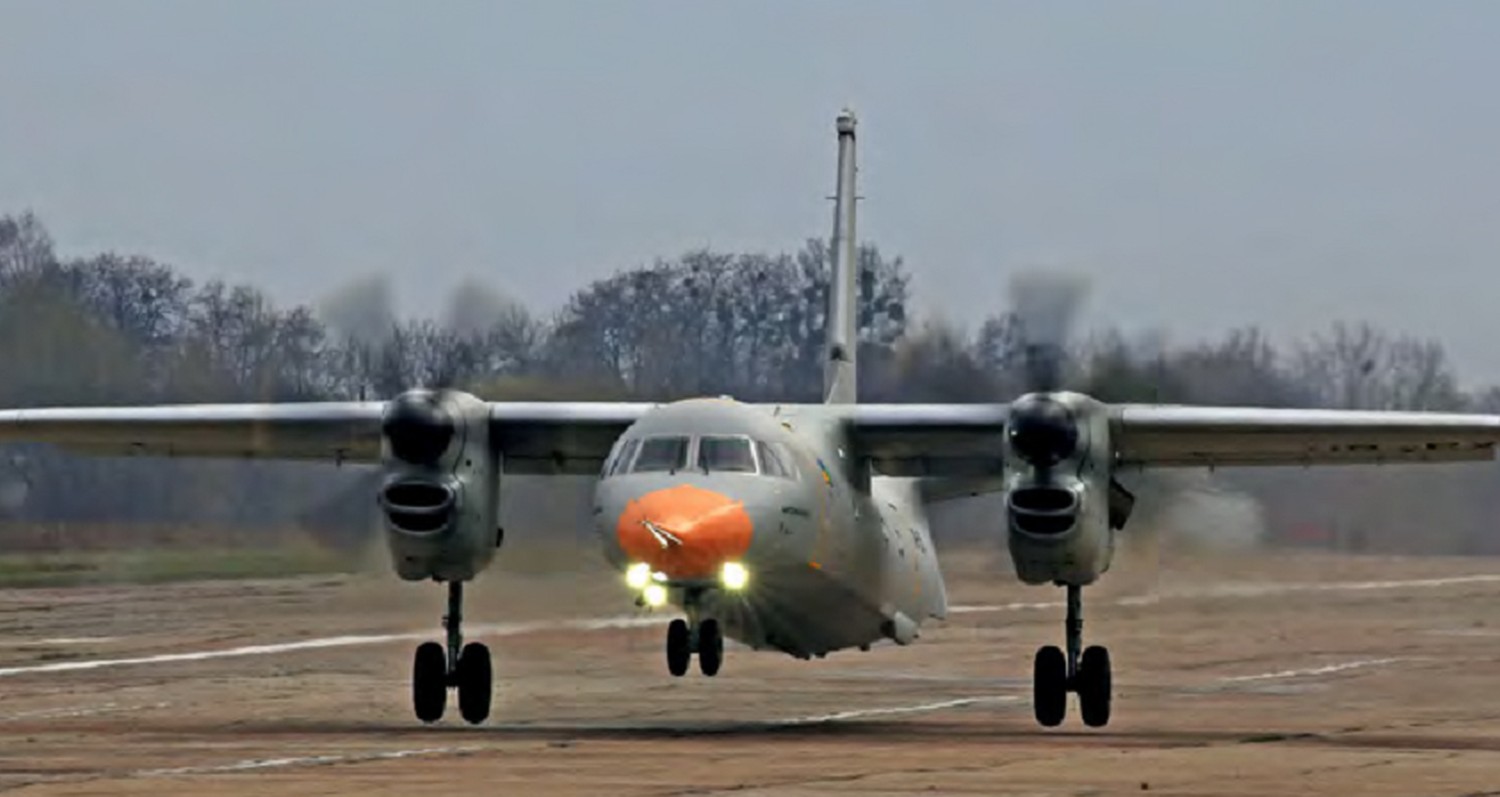 The An-132D prototype immediately after taking off from Kiev-Svyatoshino Airport on March 31. 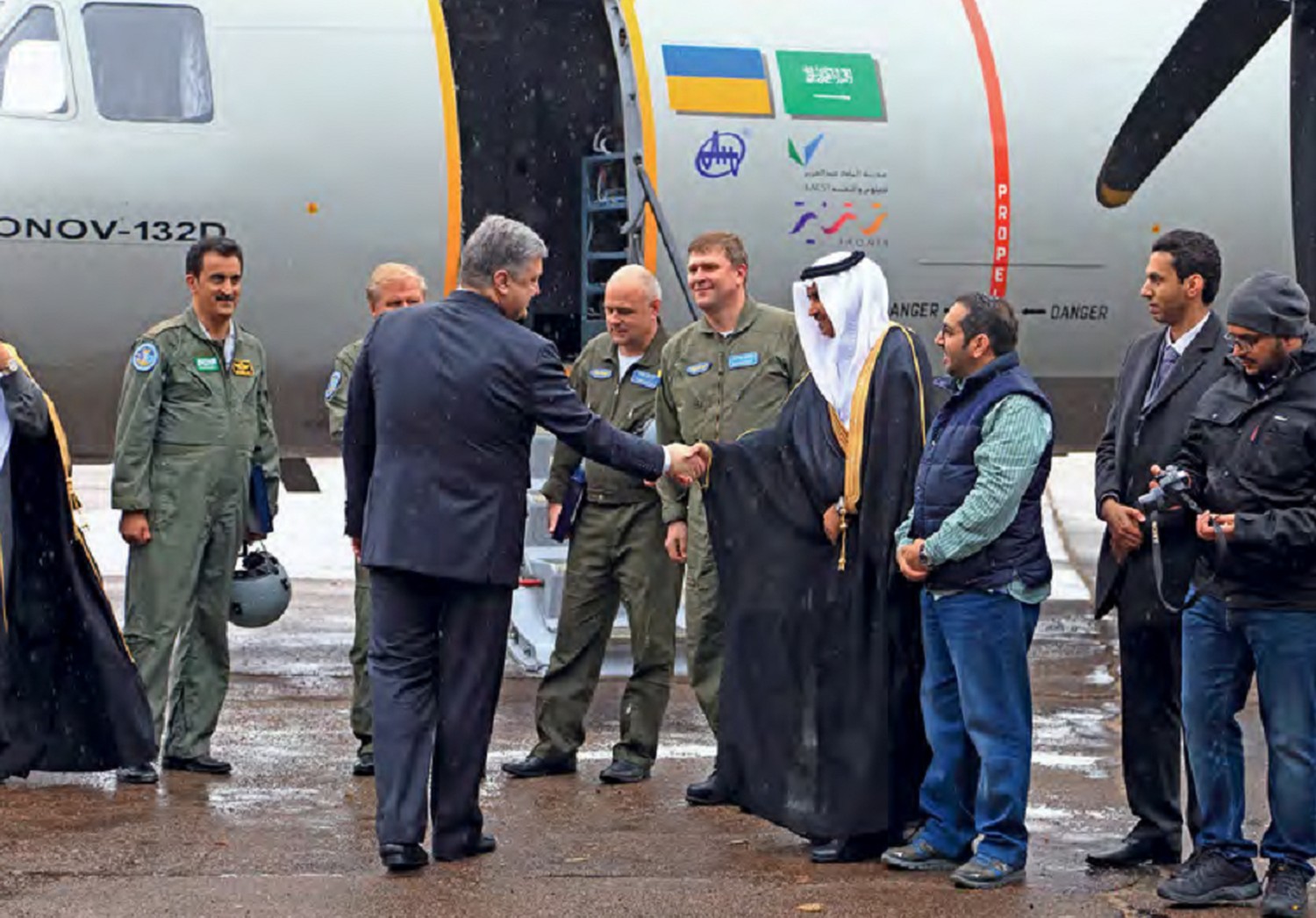 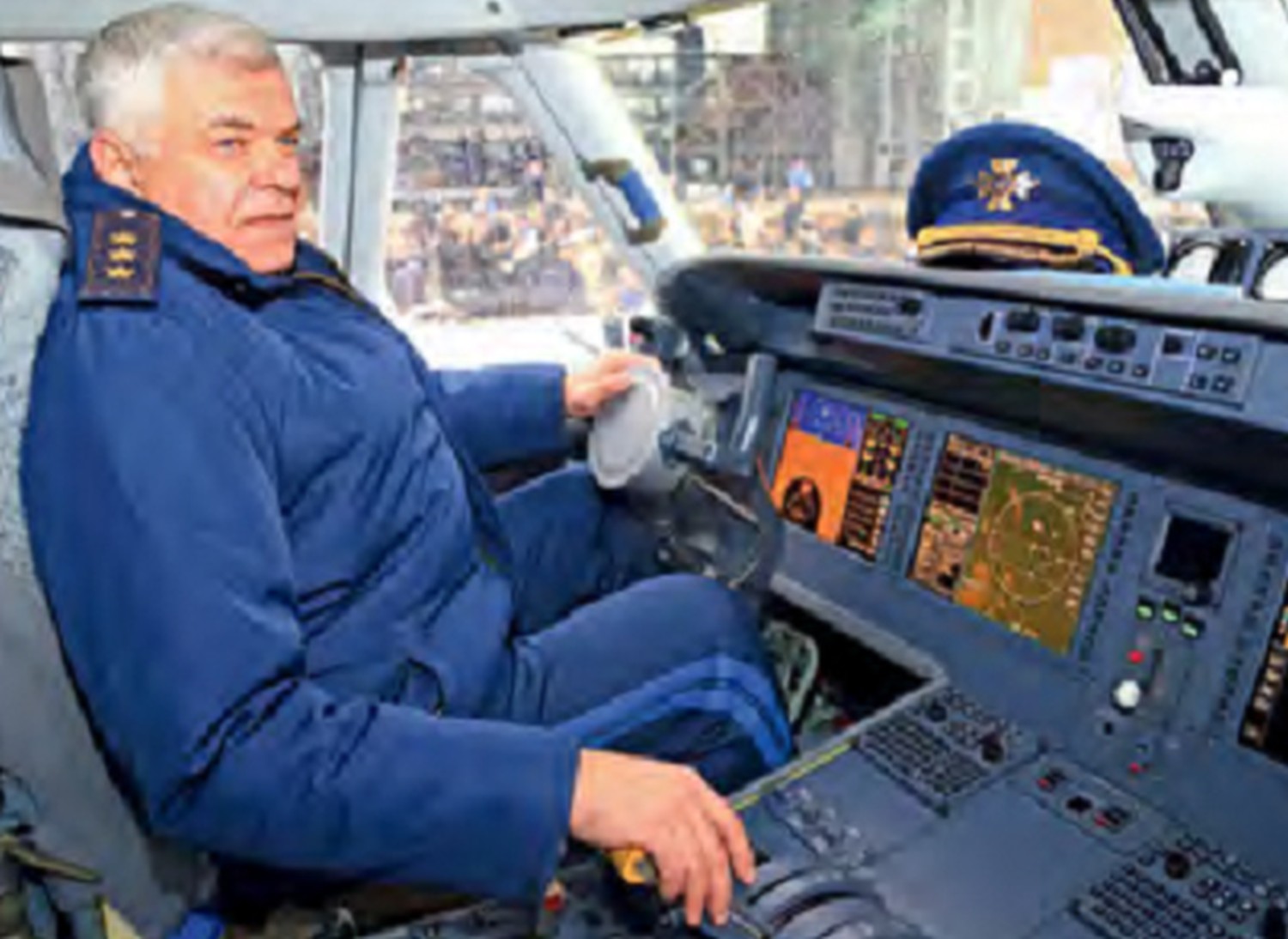 Ukraine Air Force Commander, Colonel- General Serhiy Drozdov, sat behind the controls of the An-132D. Although no official plans for this exist yet, the Ukrainian Air Force is undoubtedly a serious potential customer for the new An-132.