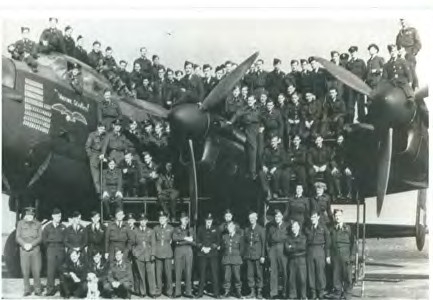 Fg Off George Blackler in the cockpit as ‘B’ Flight 550 Squadron assembled to celebrate the 100th operation of ‘The Vulture Strikes!’.

Shortly after 20:00 hours on the night of August 26, 1944 the first of 18 Lancasters began taking off from North Killingholme, the northernmost outpost of Bomber Command in Lincolnshire. They were on their way to attack Kiel on Germany’s western Baltic coast. But for a quirk of fortune that night, Killingholme’s 550 Squadron might just have written itself into RAF history.