The latest products for the discerning aviation enthusiast 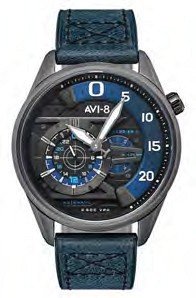 This eyecatching watch takes its name from United States Marine Corps Attack Squadron 231, ‘Ace of Spades’, which operates the AV-8B Harrier II, the McDonnell Douglas evolution of the Hawker Harrier. US Army Gen Norman Schwarzkopf named the AV-8B as one of the most important weapons of the 1991 Gulf War. It continues to serve in VMA-231 to this day, providing close air support for ground troops and performing armed reconnaissance when called to an operational theatre.

Measuring 1.8in (46mm) in diameter the watch face is set in a sturdy well-built case featuring a flat scratch-resistant sapphire lens. Comprised of more than 30 unique pieces, each part of the dial has been carefully designed and laid out using the Harrier as inspiration. A crown located at the two o’clock position features a star motif reminiscent of the US national insignia.

The passage of seconds is marked out by a custommodified disc just below the three o’clock position and the 24-hour sub-dial has been constructed with a series of layers and indexes which have been individually facetted and applied with brush and polish finishes. This attention to detail can be found across the dial and presents a contemporary military and industrialised look.

The case back of the watch shows off the custom selfwinding rotor developed to echo the turbine disc of the Rolls Royce Pegasus engine which powers the Harrier II. Price variations reflect the selection of colours and the complexity of their application. Available from www.avi-8.co.uk

Designed as the USAF’s first jet fighter interceptor and serving as such in the late 1940s, the F-80 was later adapted as fighterbomber and excelled in Korean War combat. During the first four months of the conflict it bore the brunt of the fighting against a numerically superior communist force by flying more than 15,000 sorties. In November 1950, the first MiG-15 to fall to the USAF was shot down by an F-80 in the world’s first jet-versus-jet combat.

Flying first from bases in Japan, range limitations proved a problem, but the UN’s capture of a number of airfields on the Korean peninsula enabled two Shooting Star groups to be based much closer to the front line. The Chinese had a large number of troops available to fight against UN forces, but they could not hope to gain any ground without ample quantities of supplies and ammunition to support a major off ensive.

For the final 18 months of the war, F-80s comprised the major part of American efforts to destroy constant attempts at supply build-ups. They remained in theatre until the war’s end in July 1953. By that time, they had completed an amazing 98,515 sorties, shot down 17 aircraft, including three superior MiG-15s, dropped 33,266 tons of bombs and fired 80,935 air-to-ground rockets. This history of their exploits by a very accomplished author is illustrated with 60 colour and six black and white photographs, plus 30 colourful profiles by Jim Laurier. Published by Osprey Publishing: ISBN9781472829054; available from www.osprey.publishing.com 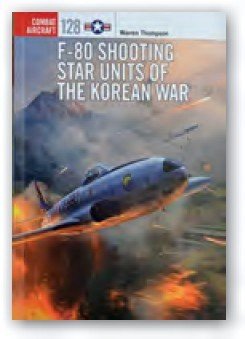 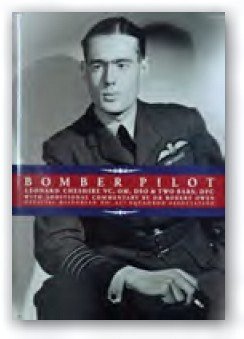 First released in 1943. this book has been republished with supplemental material A separate commentary is provided by Dr Robert Owen.official Historian of the 617 Squadron Association. It provides additional details of the events described by the author, who was subject to the demands of wartime security, placing them in the broader context of the bomber off ensive. It includes a full record of Cheshire’s operations and wartime awards and there are also 29 black and white photographs

Cheshire’s words tell of the early days of the RAF bombing campaign written by an airman who was to become one of the most highly decorated pilots of World War Two. The narrative begins in June 1940 when he began flying operations as second pilot on an Armstrong Whitworth Whitley. Two months later, he became a captain with his own crew. Minimal navigational aids meant that finding an assigned target was often a matter of luck.

Returning to base could be equally difficult, as shown by a tense account of getting completely lost over the North Sea until he found the English coast by chance. There is a vivid description of another incident in which he flew a Whitley home with 15ft (4.57m) of the fuselage side blown out by an exploding photographic flare. Fie converted to the Halifax early in 1941. a demanding aircraft after what he described as ‘the homely and simple” Whitley. In May 1942 he took part in the first Thousand Bomber Raid. Cologne was the target and Cheshire ends his book at this point.

This is a very interesting book, illustrated with 31 colour and 172 black and white photographs, combining solid history with many anecdotes to trace the often- controversial development of the airport. The author spent 12 years (1966-78) reporting the news from Heathrow for the national print and broadcast media. The book begins with an overview of the various aerodromes around London established either during World War One or improvised immediately afterwards. The first regular air services to mainland Europe took place from a shortlived site. Hounslow Heath, close to today’s Heathrow.

The story of Heathrow Airport’s birth in 1944 by subterfuge is told in detail. The governmental cover story was that a large new transport base was necessary to further the British war effort in the Far East. In truth, there were plenty of suitable airfields already in place, but wartime powers of requisition were employed to secure a site near London for a huge post-war civil airport. The Fairey Aviation Companys Great West Aerodrome was taken over and work began on the runways, the first commercial flights beginning in 1946.

Facilities were primitive at first. The tented terminal was replaced by huts and then a proper terminal in the Central Area in 1956. The roof garden plane- sporting vantage point gets its own entertaining chapter, while others cover the ups and downs of BOAC. British Eagle and the Concorde era. The book ends with a lucid analysis of the arguments for and against the building of a third runway, based on the author’s in-depth knowledge. 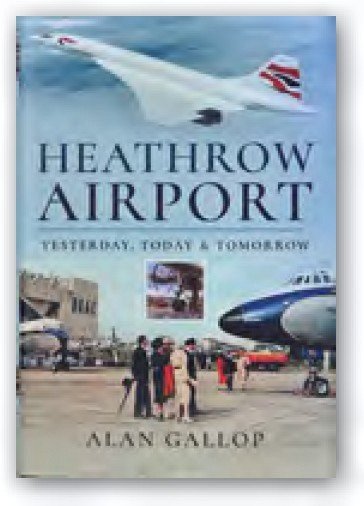