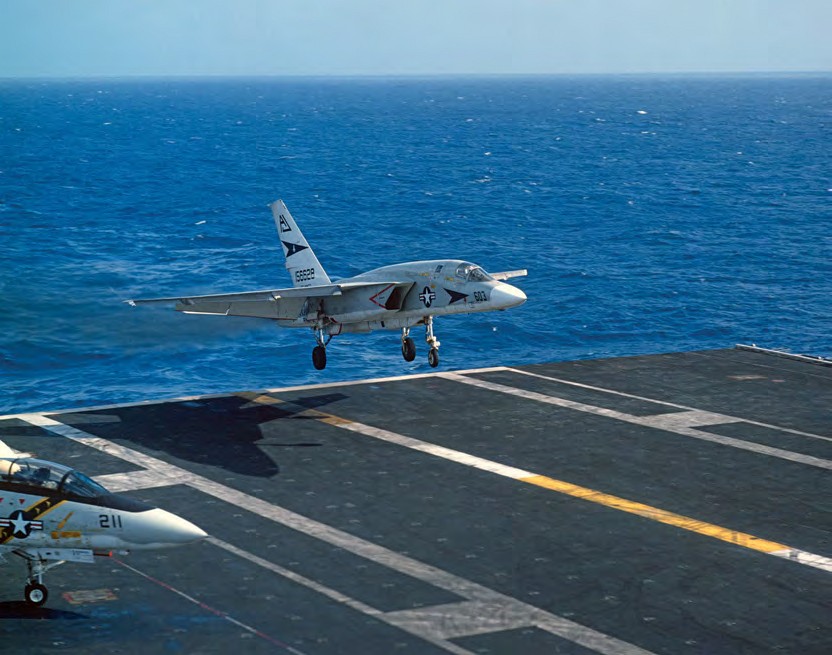 1978 was a memorable year for British carrierborne aviation, with HMS Ark Royal (R09, the fourth Ark) setting out from Plymouth on 5 April for its final deployment before retirement. While the Royal Navy would be — temporarily at least — out of the fixed-wing carrier game, the US Navy remained totally committed. USS Nimitz (CVN 68), the lead ship of a class of nuclear-powered, 100,000-ton carriers, had already made a first deployment, to the Mediterranean in July 1976.

I was fortunate to have visited Ark Royal during its work-up in the North Sea earlier that year. Now, through the good offices of the US Navy in Europe (then headquartered in North Audley Street, London) I had arranged a visit to Nimitz in the Mediterranean. “If you can get to NAS Sigonella by 2 May, the ship will be close, and we’ll get you aboard by helicopter”, I was told. Following a pleasant flight by Monarch BAC One-Eleven to Sicily, I reported to my US Navy contact at Sigonella. “Slight change of plan”, he said. “Nimitz passed through the Straits of Gibraltar last night and is currently steaming into the Atlantic. But don’t worry, we’ll get you there”.

Which he did, putting me aboard a C-1A Trader of VR-24 on its carrier on-board delivery (COD) run to the ship. We stopped to refuel at Palma (“Please, no photos. The Spanish authorities don’t like cameras”) before the second leg, ending with an arrested landing aboard Nimitz. This was my first experience of a fixed-wing carrier landing. It wasn’t that dramatic, but strange in that the C-1A’s cabin seating faced rearwards. We — there were three journos in our party — were hastened from the flight deck and taken down to our quarters, to be told that we were now subject to the laws of the United States and that, if we had any alcohol in our possession, we must surrender it forthwith. This was a reminder that the US Navy at sea is ‘dry’.

Flying activity aboard Nimitz was relentless, with launch and recovery cycles throughout the 24 hours. Below deck, there was only artificial lighting and you soon lost track of day or night. Statistics on Nimitz tend to numb the mind, so I shall avoid repeating any, but the Carrier Air Wing comprised eight squadrons: two fighter with F-14A Tomcats, two light attack with A-7E Corsair IIs, one heavy attack with A-6E Intruders, one airborne early warning with E-2C Hawkeyes, one fixed-wing anti-submarine warfare with S-3A Vikings and one helicopter ASW with SH-3Hs, along with an RA-5C Vigilante reconnaissance detachment.

Over the next six days, there was plenty of time for photography of the regular flight deck activity. One of the advantages of being aboard a carrier at sea is that the very fact of your presence is the near-guarantee of your right to be there. Unlike on a military (especially a US Air Force) airfield, you are not constantly stopped and asked for identification. We were well-looked after and well-fed, and were offered some helicopter flying in an SH-3: “Report for briefing at 04.00, take-off at first light.”

Nimitz was clearly geared up for hosting guests, whether bottom-of-the-pile aviation journos or VIPs. It was while I was eating my breakfast Wheaties in the officers’ mess that an elderly gentleman put his hand on my shoulder and offered, “Mr Calvert, I’m Joseph Luns. I trust you’re enjoying your visit”. Joseph Luns? I knew the name, but it was only after he departed that I recalled that he was the Secretary-General of NATO.

We were told that if we had any alcohol in our possession, we must surrender it forthwith — a reminder that the US Navy at sea is ‘dry’