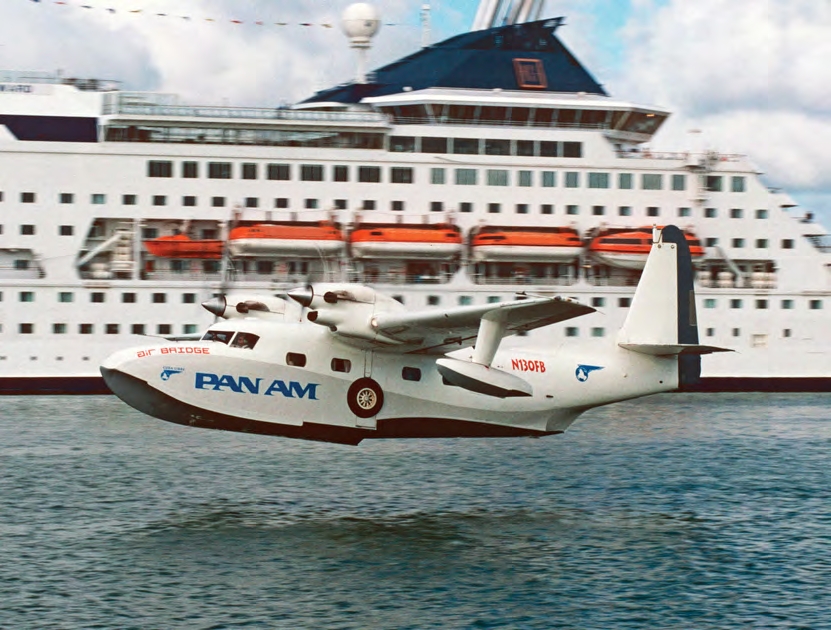 Pan Am Air Bridge G-73T Turbo Mallard N130FB Cuba Libre comes in to land on the waters of Biscayne Bay on 29 July 1996, with a cruise ship docked at the port of Miami in the background.
DENIS J. CALVERT

Until its untimely demise in 2007, Chalk’s was the oldest international airline in existence. Founded in 1919 by A. B. ‘Pappy’ Chalk, the name has always been associated with flying boat operations on routes between the Bahamas and the Florida mainland. Post-war, Chalk’s updated its fleet to include several ‘new’ Grumman products — Widgeon, Goose and Mallard. Yes, these were amphibians, but its routes almost all featured take-offs and landings from water, using concrete seaplane ramps to offer a full ‘feet-dry’ service.

The jewel in its crown was its terminal in downtown Miami, the grandly-titled Miami Sea Plane Base (MPB, to use its IATA code). Situated just off MacArthur Causeway, this small green-painted building was anything but luxurious; ‘clean and functional’ summed it up well. It fronted onto the waters of Biscayne Bay and featured an apron capable of accommodating no more than a couple of aircraft.

By the early 1990s, the company had a problem. It was operating the small 17-seat G-73T Turbo Mallard, a Pratt & Whitney PT6 conversion by Frakes, on routes between MPB and the Bahamas while the competition was using larger aircraft from airports with hard runways. Passengers — and especially the high-rollers travelling to Paradise Island’s casinos — found the attractions of an all-weather service by DHC Dash 7 from Fort Lauderdale, West Palm Beach or Miami irresistible.

Chalk’s changed hands again in January 1996, its new owners rebranding the airline as the Pan Am Air Bridge. There then came the realisation that the novelty of the flying boat and the romance and adventure of seaplane flight were the operation’s unique selling points. In short, if you’ve got it, flaunt it. The Turbo Mallards were repainted in a snazzy grey and white livery with the Pan Am name writ large on the forward fuselage and the original ‘winged globe’ logo featuring prominently. Each aircraft was named: N130FB became Cuba Libre after a favourite tipple of Ernest Hemingway’s. Even if the result was not the total re-creation of a pre-war Boeing 314, you had to admit that it had style.

At the same time, the route network was rethought. While the staple routes from MPB to Paradise Island and to Bimini were retained, new destinations were added. Some were intended to appeal to the ‘huntin’, fishin’ and snorkellin’’ visitors to various island resorts, but the service down the Florida coast to Key West — once home to the bars most frequented by Hemingway — was firmly aimed at the holidaymaker wanting to experience flying from water.

“ The Miami Sea Plane Base became a mecca for aviation enthusiasts. Fortunately, the staff and even the pilots were always accommodating”

Check-in and boarding at MPB was almost ridiculously speedy, the airline prided itself on its punctuality, and the whole operation was slick and friendly. MPB became a mecca for aviation enthusiasts who came to witness the last ‘real’ seaplane operation in the States. Fortunately, the staff and even the pilots were always accommodating (thanks, Stella), at least within the limits imposed by MPB’s being a customs airport.

Despite the efforts and innovations, it all came to naught. In 1999, the airline was sold again, to be re-badged as Chalk’s Ocean Airways. Increased airport security following ‘9/11’ made the MPB terminal unviable and operations moved to Fort Lauderdale airport. Worse was to come with the crash off Miami Beach of Turbo Mallard N2969 on 19 December 2005 following fatigue failure of the right wing. All 20 on board died and, as a result, the Turbo Mallard fleet was permanently grounded. A sad end to a great adventure.