There is a nice quote, attributed to Lord Brabazon of Tara but quite possibly apocryphal, concerning airliner design and safety. Asked to explain why he always chose to fly in four-engined aeroplanes, he replied, “because there are no five-engined aeroplanes”. For long-haul over-water sectors, four engines had long been considered necessary, starting with the era of the Boeing Stratocruiser and continuing with that of the 707. Later, Airbus promoted its fourengined A340 with the slogan ‘4 engines 4 long haul’, and Virgin Atlantic emblazoned this wording on the engine nacelles of its A340s. Yet despite promising fourengined reliability and comparable economics to its twin-engined counterparts, the A340 failed to sell well, losing out to the better fuel economy and operating costs of the Boeing 767, 777 and 787 and Airbus’s own A330 and A350. The ever-increasing reliability offered by turbofans in the 50,000lb-plus class made possible ETOPS (Extendedrange Twin-engine Operational Performance Standards) operations, this certification allowing twins to operate longhaul routes provided they kept within a specified flying time from suitable diversion airports in case of (a single) engine failure.

Airliners have traditionally had an even number of engines — two, four, six, eight or even 10: remember the Saro Princess? Every so often, designers have come up with a proposal for a three-engined aircraft. If four engines are too many and two are too few, why not go for three, and enjoy improved asymmetric handling into the bargain? Ford’s Trimotor, Fokker’s F.VII and Junkers’ Ju 52/3m each successfully adopted a three-engined layout in the late ‘20s and early ‘30s, with the CASA 352, a licence-built Ju 52, remaining in production in Spain until 1954. 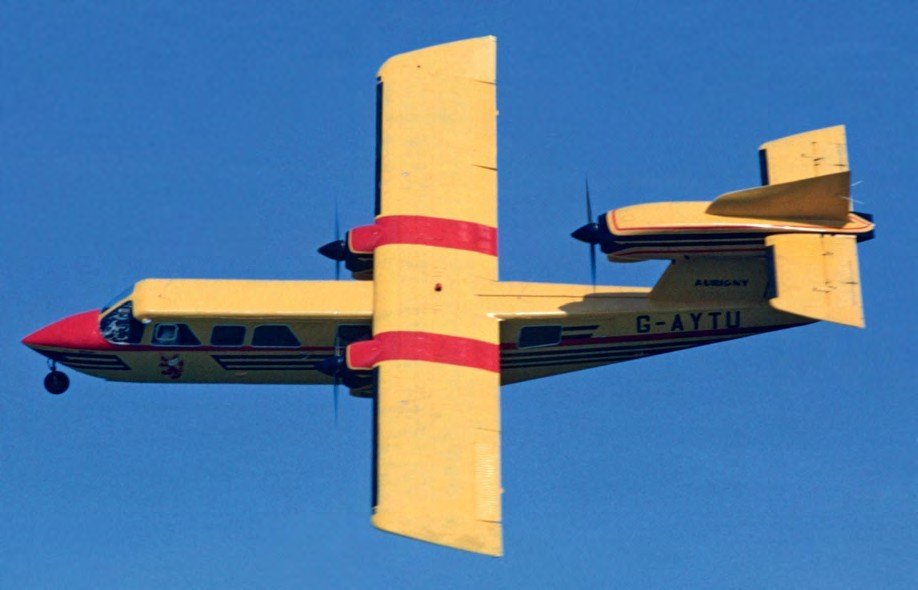 One of the more unorthodox ‘triples’ — the Trislander, here represented by G-AYTU of Aurigny flying at Bembridge in 1971. DENIS J. CALVERT

In the ‘60s, UK and American manufacturers came up with a new generation of tri-jet airliners, typified by the Hawker Siddeley Trident, the Boeing 727, the Lockheed TriStar and the (McDonnell) Douglas DC-10 and MD-11. These enjoyed varying degrees of commercial success. On an altogether smaller scale — everything on the Isle of Wight is on a smaller scale — Britten- Norman met the need to stretch its 10-seat Islander by lengthening the fuselage to accept extra seat rows and adding a third Lycoming O-540 atop the fin. Known initially as the Islander Mk3, the aircraft was produced as the Trislander.

Yet the three-engined revolution fizzled out again. KLM operated the last passenger flight on an MD-11 in October 2014, although cargo airlines continue to fly the type. The TriStar has fared even worse. The RAF was among the very last users — though some ex-RAF examples are now proposed to return to flight in civilian hands as air-to-air refuelling tankers — and Orbital Sciences’ N140SC, converted as a space launcher, is the final flying example. As to the Trislander, the retirement on 21 June to the Duxford Aviation Society of G-BEVT, Aurigny’s last of the type, removed UK enthusiasts’ last chance to fly in a Trislander without first going to Puerto Rico or Guyana.

“Britten-Norman stretched its Islander and added a third Lycoming O-540, but the threeengined revolution fizzled out yet again”

If there’s one sphere where the three-engined formula still thrives it is with Dassault Aviation’s line of Falcon business jets. Visitors to the Paris show this June will have seen Falcon 8X F-WWQU giving a display of agility that would not have been out of place for a fighter. That said, very few other manufacturers today have a three-engined aircraft of any kind in production.

Meanwhile, Boeing’s eight-engined B-52 flies on obliviously towards its 2040 out-of-service date. Around 80 remain on the USAF’s front line, defying obsolescence and continually sidestepping plans to re-engine the type with four modern turbofans.