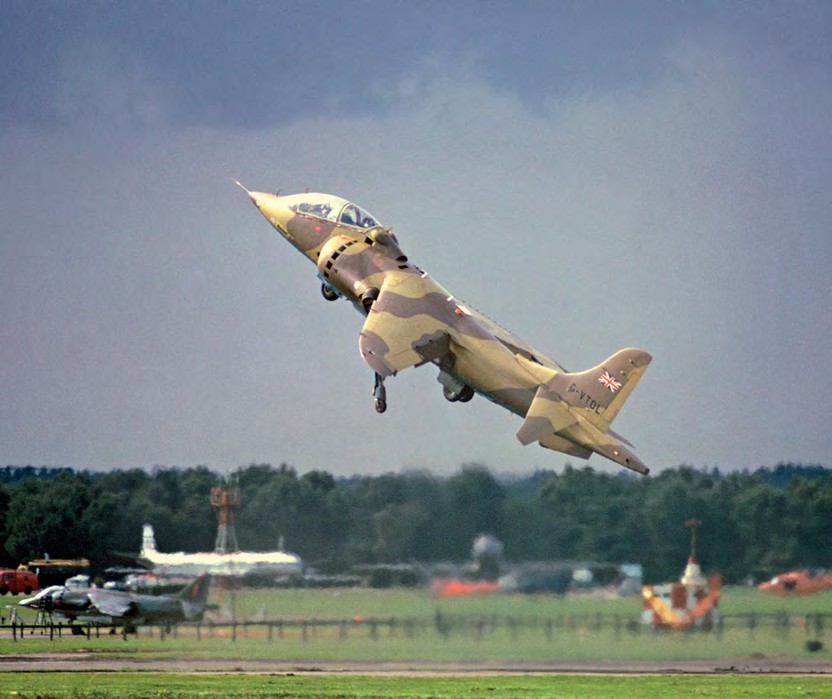 Depending on your definition of exactly when it all started, the Hawker/Hawker Siddeley/BAe/McDonnell Douglas Harrier is at least 57 years old. It was on 21 October 1960 that P1127 XP831 made its first tethered flight at Dunsfold, piloted by Bill Bedford with his right leg in plaster following a car accident. Thus was born the Harrier ‘jump jet’. To cut a very long story short, the P1127 morphed into the Kestrel that was developed into the Harrier, which was then completely rethought as the Harrier II.

For Hawker Aircraft, which had produced a long line of single-seat fighters for the RAF — Fury, Hurricane, Typhoon, Hunter and many more — the Harrier was a bold move into unknown V/STOL territory. All credit to Stanley Hooker and Bristol Aero-Engines for having the confidence to start development of the BS53, as the Pegasus was initially designated, in advance of any obvious application. Hooker recalled that he then received a letter from Sydney Camm, chief designer at Hawker, stating: “Dear Hooker. What are you doing about vertical take-off? Yours, Sydney.

With a single vectored-thrust Pegasus engine employing four (two ‘hot’, two ‘cold’) nozzles, Hawker got it right first time with the Harrier. While Dassault’s Mirage IIIV had no fewer than nine engines, Hawker kept its design simple and produced an aircraft with an affordable price tag and realistic maintenance demands.

The Harrier burst into the public consciousness with the Daily Mail Trans-Atlantic Air Race of May 1969, when a GR1 took off from a station coal yard in central London temporarily re-christened ‘RAF St Pancras’. The Harrier has long been a favourite airshow performer. Nobody who witnessed it will forget the ‘Farley climb’, while a generation of schoolboys have been heard to remark, “Look, it’s flying backwards”. Those same boys may also recall the character ‘Harriet Jump Jet’, a schoolgirl capable of hovering under the power of her own inbuilt vectored thrust engine, in that cult comic Viz. Fame indeed. Yet no Harrier has flown at a British display since the RAF abruptly retired the type in 2010, apart from that hugely welcome — and hugely impressive — reminder of the AV-8B’s capabilities provided by the Spanish Navy at Farnborough 2014. Airshow organisers please note; this one’s a crowd-puller.

Handling the nozzle lever is a skill Harrier pilots are proud of, that extra something that distinguishes them from other fighter pilots ““

History will record the Harrier as the first truly successful fixed-wing V/STOL aircraft. Now on the close horizon is the F-35B Lightning II, for which the two-seat VAAC Harrier T4, XW175, did invaluable work in developing systems that allow the F-35B to make a virtually hands-off recovery to landing. This is close to the ‘coffee bar button’ once humorously suggested for future V/STOL aircraft by John Farley. Many Harrier pilots feel this to be an unnecessary, if not downright bad, move. Handling the nozzle lever is a skill they are proud of, that extra something that distinguishes them from other fighter pilots. “What’s the difference between a Harrier pilot and God? Answer: ‘God doesn’t think he’s a Harrier pilot.”

Today, the RAF, the Royal Navy and the Indian Navy have all retired the Harrier, leaving the US Marine Corps and the Spanish and Italian navies to continue flying it until 2025 and maybe beyond. Will the F-35B prove itself to be the second successful fixed-wing V/STOL (or STOVL, as Lockheed Martin says) type? Given the UK’s huge investment in the aircraft, one surely must hope so.