For many flight simulator enthusiasts, the Flight Sim show at RAF Cosford in the UK is a staple in their annual simulator diets. It’s a chance to meet up with people they’ve been friends with for years online, for others the event serves as an opportunity to meet the people responsible for making some of their favourite products. 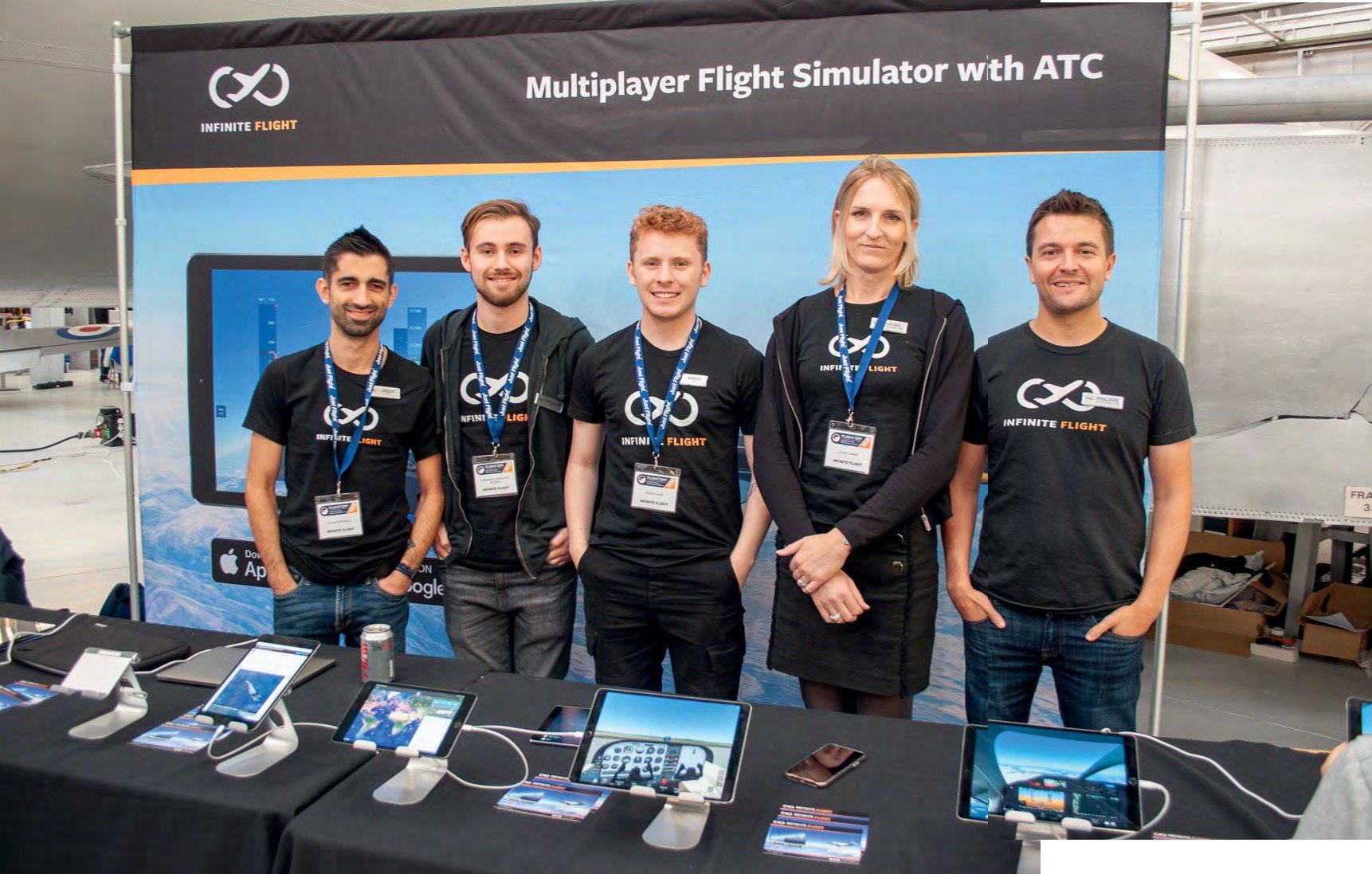 Now in its seventh year (the first year at Duxford and six years at Cosford), the show returned to the RAF Museum in Cosford for the first time as a two-day event over the weekend of October 5 and 6. Close to 2,000 people descended on Hangar 6 for the show which celebrates all things flight sim. As usual, shortly before the doors opened, keen event goers formed an orderly queue which stretched along the path and around the building.

On offer for attendees in Hangar 6 were 33 exhibitors from all corners of the industry filling the space in among the aircraft. With so many airframes in the hangar, it’s surprising that there’s any space for anything else. I say it every year but for some reason it remains a prominent theme in my mind that there’s something special about having a flight simulation event surrounded by aircraft. At 9.30am when the doors opened, the hangar became a hive of activity as visitors moved from stand to stand observing what was on offer. One of the first booths you saw when walking in was that of hardware manufacturer, Honeycomb Aeronautical. The San Diegobased firm had its newly released Alpha Flight Control yoke on display along with its upcoming Bravo Throttle Quadrant system. 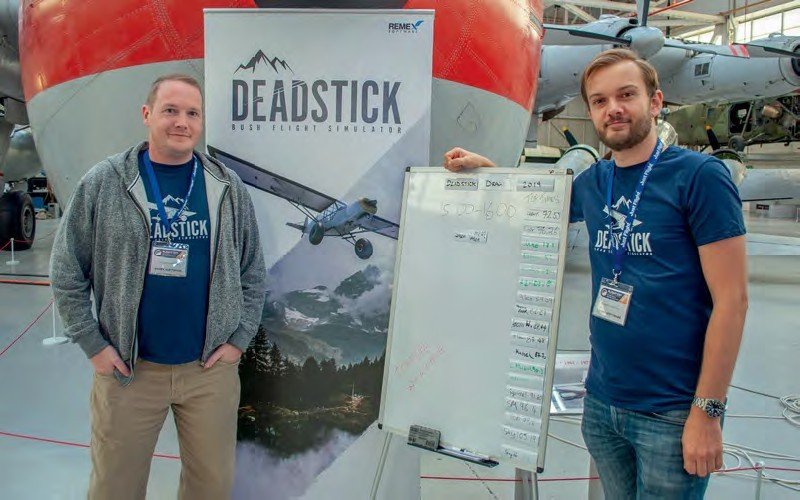 Stuart Morton (left) and Chris Cheetham (right) from REMEX Software - the makers of the upcoming Deadstick Bush Flight Simulator. The pair was running a competition to win a branded T-shirt.

Situated next to the de Havilland Comet, the Orbx booth was occupied by most of the development and management team who had come out in force to represent the scenery giant. The Australian firm was showing off a Cessna 172 simulator it had purchased for its new office while also highlighting its new scenery packages including a stunning rendition of Hawaii through its CityScape Honolulu for P3Dv4 (reviewed in this issue). Komodo Simulations, the makers of helicopter flight controls made its return to the Flight Sim show this year demonstrating its resin controls for the UH-1 inside DCS with the HTC Vive Pro virtual reality headset.

Flight Sim show regular Aerosoft was also back again this year. On offer at its stand was a wide selection of boxed software as well as a number of hardware products including the Honeycomb yoke - for which the German simulation giant is the European distribution partner for the company.

Led by its new CEO Anna Cicognani, the Orbx team was well represented at this year’s show. Founder John Venema has assumed a new role at the Australian firm as chief product officer.

After making its debut at last year’s show, iPad-based flight simulator Infinite Flight made a return. With a very dedicated fan base, the platform always draws a crowd of people wherever it goes. REMEX Software presented its highly anticipated Deadstick Bush Flight Simulator. The platform, which simulates the life of a bush pilot, was available for visitors to try out for size. The team was running a competition which placed a spotlight on the multiplayer and voice communication capabilities of the upcoming simulator. Participants were tasked with taking off, flying a set distance, landing and then turning around and flying the return journey as fast as they could. The winner for each day bagged themselves a branded T-shirt.

The organiser of the event, Just Flight had a stand which offered visitors an insight into future developments. The team was also selling download codes for its software.

On top of hosting the show, Just Flight’s presence in the exhibition hall consisted of a split stand, half dedicated to current products and the other focused on future development. The stand gave visitors the opportunity to get hands-on with the products and speak to the people behind upcoming add-ons such as the 747 Classic, Traffic Global and 146 Professional.

Flight simulator community groups always assume a large presence at the Flight Sim show, and this year was no different. Among those present were MODSim, IVAO, VATSIM, South West Flight Simulator Group (SWFSG), the Virtual Royal Airforce, BAVirtual and Fly UK Virtual Airways. All had various setups on display to entertain and attract prospective members.

The exhibitors were not the only activity on offer to attendees at this year’s show. In the National Cold War Exhibition building, a range of presentations were available for visitors to enjoy. 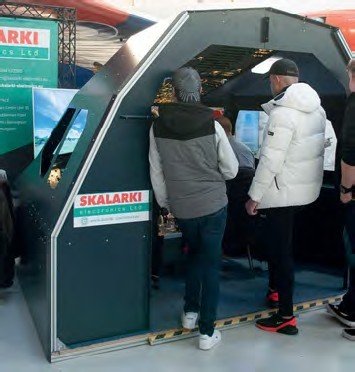 A regular to flight simulator shows, Skalarki Electronics had its Airbus A320 fixed-base simulator on display. Popular with attendees, the system is something most would dream of owning.

Varying slightly between days, the schedule outlined six presentations on Saturday and five on Sunday. Orbx returned this year to offer a roadmap and update on its development progress.

On taking to the stage, founder John Venema praised the work of the Just Flight team in putting together the show: “It’s just growing and growing, isn’t it? It’s great to see so many new faces here and I think it’s a great testament to the state of flight simulation here in the United Kingdom. We intend to be here for many years to come.”

The show is popular with community groups. Here MODSim associates demonstrate their offering to prospective members.

What followed was a recap of what the scenery giant has done in the 12 months since the last show. In its last appearance, Orbx announced TrueEarth Great Britain. Speaking about the product, Venema said: “It has been an absolutely stunning success for Orbx. It’s a record breaker in terms of sales and has had rave reviews across the board.”

Venema then progressed to talk about what Orbx would be releasing in the coming months. First up was Alderney for Prepar3D V4 which has enhanced the former Earth Simulation assets it acquired in August last year. X-Plane then dominated the presentation as the remaining products were all for the platform including: TrueEarth US Northern California, TerraFlora and Tacoma Narrows Airport. There was a surprise for attendees during the presentation as Orbx announced it is developing an Edinburgh Airport scenery package for X-Plane: “It is an absolute monster of an airport in terms of how it performs and looks,” Venema declared. 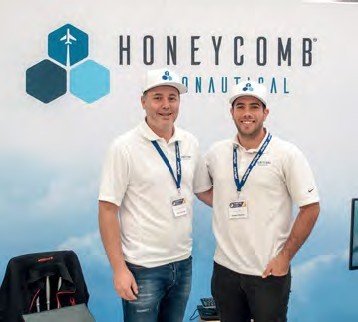 Following Orbx’s presentation, Dermot Stapleton, Just Flight’s operations director, took to the stage for the company’s presentation. It began with a history overview which spans back to 1996 when the Huntingdon-based firm was known as ‘The Associates’.

Stapleton then handed over to Robin Goodchild, the lead developer on the company’s 747 Classic project. Goodchild showed the audience the intricacies of creating such a complex aircraft, covering subjects such as the electrical, hydraulic and pneumatic systems. The presentation concluded with a preview of Traffic Global for X-Plane. 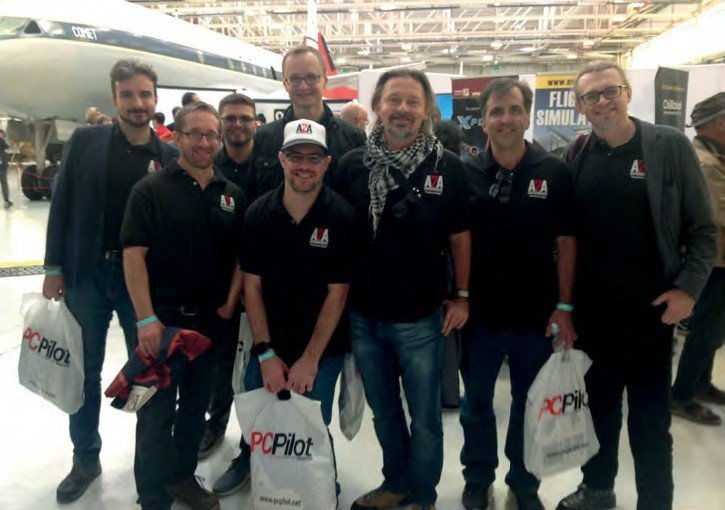 A2A Simulations also attended the Flight Sim show - as visitors on this occasion.

Honeycomb Aeronautical provided a presentation focused on how consumer flight simulation can solve the current global pilot shortage. The San Diego-based firm wants to expand the use of flight simulators in high schools to promote aviation as a career choice for young people. Using its hardware systems, the aim is to get simulators into as many schools as possible while also pursuing regulatory approval for devices to be used during flight training to reduce the total hours students take to complete their licence.

After the presentation, Honeycomb Aeronautical founder, Nicki Repenning, spoke about the reason for focusing on the issue: “It’s to have a bigger purpose than just making a flight simulator product, to actually make a difference.”

This year marks Honeycomb’s debut at the show, Repenning commented: “I’m very impressed with the setting, from an ambience standpoint you couldn’t ask for a better location. I think the representation here is very good, you have a little bit of everything.” 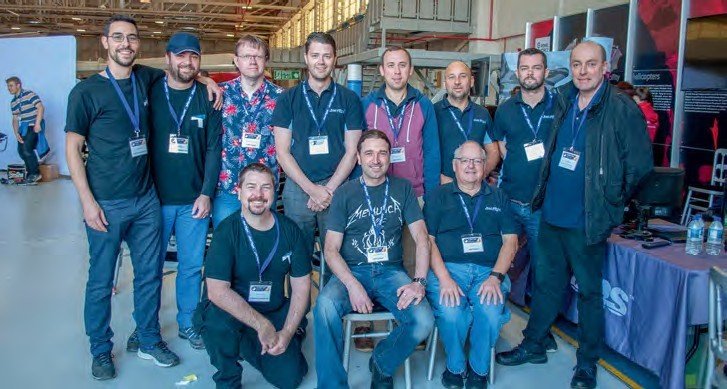 The standout difference between previous years’ shows and the 2019 event is the fact that it was spread across two days. Speaking on the Sunday as the event drew to a close, Scott Phillips, Just Flight’s marketing manager, said this year’s show had been “successful” and that adding the extra day “will probably pay off”. He continued: “Both days have been busy, Sunday was less busy but still a good contrast to Saturday.” In the weeks since the show, Just Flight said it was pleased with the addition of another day and they now plan to stick to the format for next year’s event. Personally, I believe that adding an extra day to the event was a good decision, it gives people more flexibility. For example, someone could sit through the seminars on day one and browse the exhibition hall on day two. As Scott said, the quieter day on Sunday also enabled visitors to get closer to stands while offering exhibitors the chance to network. 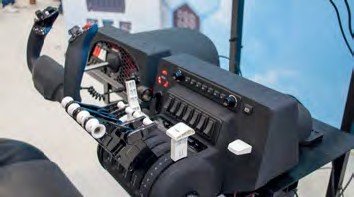 Honeycomb Aeronautical’s yoke and throttle system. The Bravo Throttle Quadrant system is still in production but prototype versions were available for visitors to try out.

If you ever wanted to introduce someone to flight simulation, this event would be where you would bring them. The 2019 Flight Sim show demonstrated that the industry is in the strongest position it could be as it moves forward. The event managed to offer something for everyone and that’s difficult to do when there’s so much out there. With Microsoft re-entering the industry, turbulent times are ahead and it will be interesting to see what happens between now and the next Cosford show. Who knows, if we’re really lucky, we might even see them at next year’s show? Fingers crossed people!

PC Pilot would like to thank the Just Flight team for putting on such a fantastic show; the hard work was appreciated by all who attended.