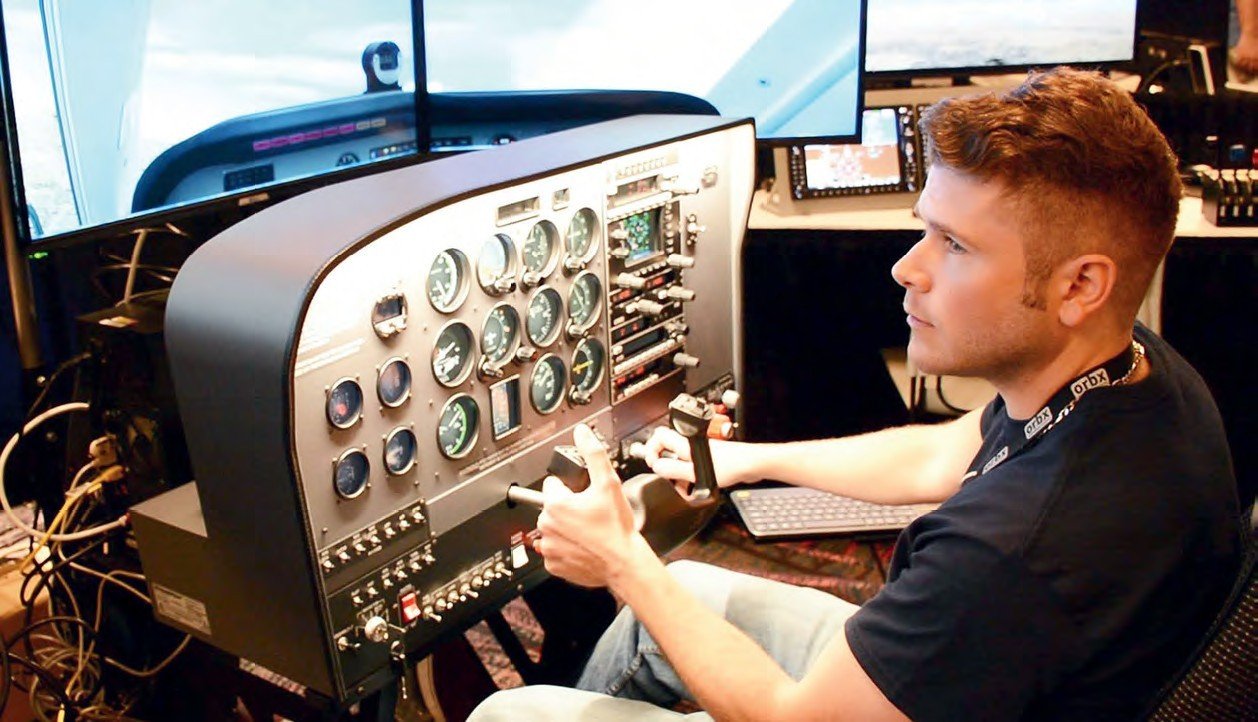 Several innovative products were on display including the Solo Cessna flight panel from VIRTUAL-FLY.

FlightSimExpo is one of the most anticipated events in the flight simulation community this year. Taking place June 7-9, 2019 at Renaissance Orlando at SeaWorld in Florida, some of the biggest names in the industry will be attending the show. We spoke to event organisers, Evan Reiter and Phil Coyle, to get their thoughts on the upcoming event.

PC Pilot: Hi Evan and Phil, thank you for speaking to us about FlightSimExpo 2019. Looking back at the inaugural event in Las Vegas, did it meet your expectations and what kind of feedback did you receive from visitors and exhibitors?

Evan and Phil: Yes, it met, and in fact, exceeded them. We received an incredible amount of support from the community and more than doubled our initial expectations for attendees. We had to stop selling tickets a few days before the event because we reached the maximum occupancy of our venue. We are also happy to have received thorough feedback from the community, both through our post-event survey and via emails and social media on an ongoing basis. Several of the new aspects of our 2019 event (such as Captains’ Corner and live streaming) come directly from attendee and developer feedback. 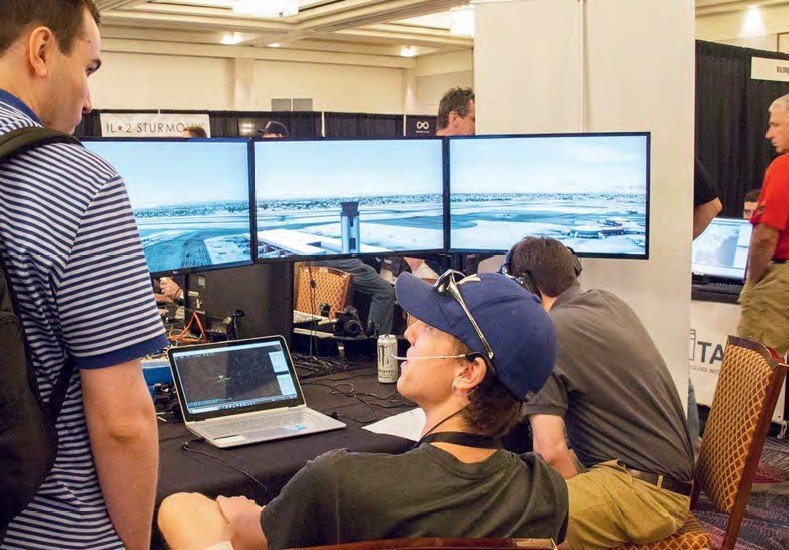 FlightSimExpo is the ideal venue for meeting fellow flight simmers.

PC Pilot: Can you tell us a bit about the people behind the show? What are their backgrounds in flight simulation and do any work in aviation?

Evan and Phil: Everyone involved in planning the event is a long-time member of the flight simulation community. Evan got into simming in 2006, well before he was flying aeroplanes, and is a frequent virtual air traffic controller at Boston Center on VATSIM today. Phil was around in the pre-FSX days. We’re proud to be working with a team of volunteers from the online aviation community. Each of us is into simulation in a big way and real-world flying. Evan is a pilot on the Embraer 175 and Phil is an aerospace engineer and a private pilot.

PC Pilot: What were the main challenges in launching a conference of this scale?

Evan and Phil: The biggest challenge yearto- year is hosting the event in world-class cities while keeping it extremely affordable for exhibitors and attendees to participate (one of our most important requirements). Fortunately, we have the support of an incredible group of developers who care about the simulation community and want to help events like this grow. This year, the Diamond sponsor keeps the event affordable for attendees and exhibitors.

PC Pilot: How do you go about deciding where the conference is held and why did you choose Orlando this year?

Evan and Phil: When founding FlightSimExpo, we wanted to create a conference that was for the community, by the community. Our role as co-owners is enablement: we want to listen to the developers and attendees and develop events that they want to see.

Shortly after the Las Vegas event, we set up a public survey asking the community where they wanted to see the 2019 event, and Orlando was the top choice, for both attendees and developers. As America’s most-visited city and one of the most familyfriendly destinations in the world, there is a ton to do before and after the conference, and it’s easy to get to, from anywhere. 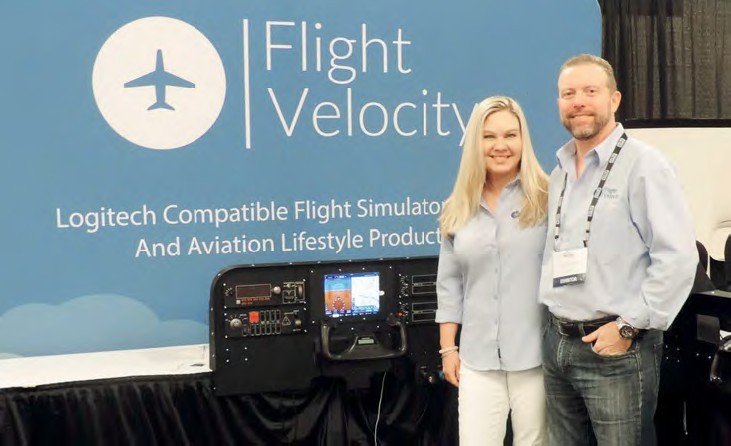 Flight Velocity was one of the many exhibitors at FlightSimExpo 2018. The company produces cockpit panels which support Logitech controller hardware.

PC Pilot: Can you tell us what developers and exhibitors will be attending?

PC Pilot: On a similar note, what seminars and panel discussions are planned for the weekend? 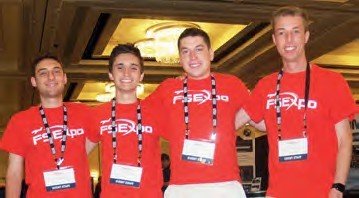 PC Pilot: Last year, Robert Randazzo from PMDG made a big announcement at the show. Can we expect something similar this year?

Evan and Phil: As with the shows in Europe, FlightSimExpo is increasingly becoming a place where developers make big announcements because they know everyone is listening. Although we can’t talk about specifics, you can expect the event to continue to deliver on being the place for flight simulation developers to announce and showcase their wares.

PC Pilot: On your website, you mentioned ‘Captain’s Corner’ which takes place on Friday. Can you explain what this is? 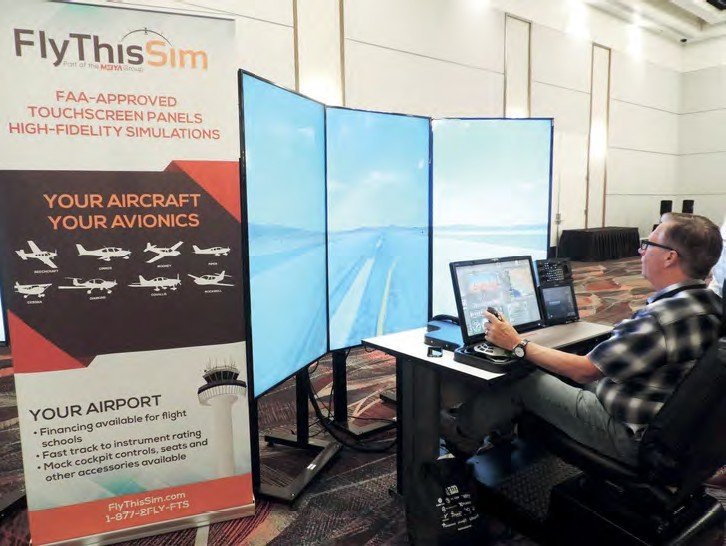 PC Pilot: How can potential visitors keep up with developments on FlightSimExpo in the run-up to the show?

PC Pilot: Are there any activities that visitors can do outside FlightSimExpo and are there any special discounts or offers available for visitors?

Evan and Phil: Yes. We’re happy to be working with great organisations to offer some exciting opportunities and discounts. Airfare discounts are available on Delta, Southwest and WestJet. There are also rental car and shuttle discounts available to get to and from the airport. While in Orlando, you can take advantage of discounts at more than 50 area restaurants and attractions, including indoor skydiving, escape rooms, theme parks, the world’s largest ice bar and more. For information, links, and discount codes, visit www.flightsimexpo.com.

PC Pilot: If somebody was thinking about attending FlightSimExpo, what would you say to them to persuade them to come to the event?

Evan and Phil: There’s something special, unique, maybe even magical about getting together with simmers and aviation enthusiasts. If you’re already part of an online community, being able to meet those you’ve known for years online is a great experience. And if you’re attending the event on your own, you’ll find it’s so easy to make friends.

Between the seminars, activities on the floor, the event social and our networking app Whova, you’ll be meeting simmers from your local area, swapping stories with virtual pilots and controllers and wondering how the weekend went by so quickly. We intentionally aren’t planning a big event dinner because we know that by Saturday afternoon, everyone will be wanting to hang out with their (new) friends.

Last year, MilViz had a stand where visitors could try out their aircraft.

PC Pilot: What are your long-term goals and how do you see FlightSimExpo developing in the future?

Evan and Phil: We want to use FlightSimExpo to bring conferences to cities across the United States and we plan to do that with the support and guidance of the community. We’ve already asked developers and attendees where they would like to see FlightSimExpo 2020 (Chicago and Las Vegas are top choices, although we are exploring options in about 10 different cities). 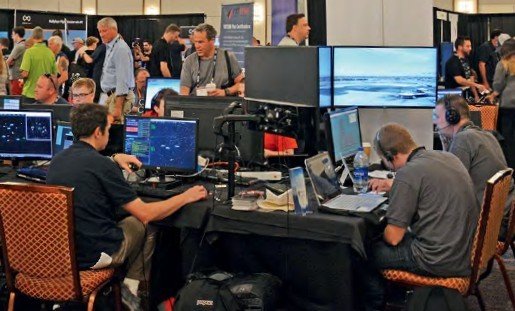 Virtual air traffic controllers were demonstrating a full ATC service during the weekend.

PC Pilot: Finally, can you tell us what in particular do you personally look forward to the most during FlightSimExpo?

Evan and Phil: Do we have to pick just one thing? We’re excited to see the community come together. For us, FlightSimExpo is an annual meet-up with good friends we connect with regularly online. And it’s incredible to see just how much the community can do when we all come together. When you walk out on to that show floor for the first time on Saturday morning and see the VR gear, 4K monitors and hardware, you realise this is a strong, passionate and growing group of aviators and simmers from around the world. We can’t wait to see everyone and see the enthusiasm for aviation and flying come to life in one place.

PC Pilot: Evan and Phil, thanks for taking the time to speak to us and we wish you all the best with the event. For more information on FlightSimExpo, visit www.flightsimexpo.com. You can also follow FlightSimExpo on Facebook (www.facebook.com/FlightSimExpo) and Twitter (www.twitter.com/flightsimexpo) for the latest updates. Please note that all images were kindly supplied by FlightSimExpo unless otherwise stated.