The show must go on

Following last year's show cancellation due to COVID, North America's community-driven flight simulation conference, FlightSimExpo has returned. Taking place over the weekend of September 24-26 at the Town and Country Resort in San Diego, California, it was run as a hybrid event with visitors attending in-person or taking part online. Event organiser Evan Reiter recounts his experience of FlightSimExpo 2021 and describes the many challenges the team had to face in getting the show off the ground. 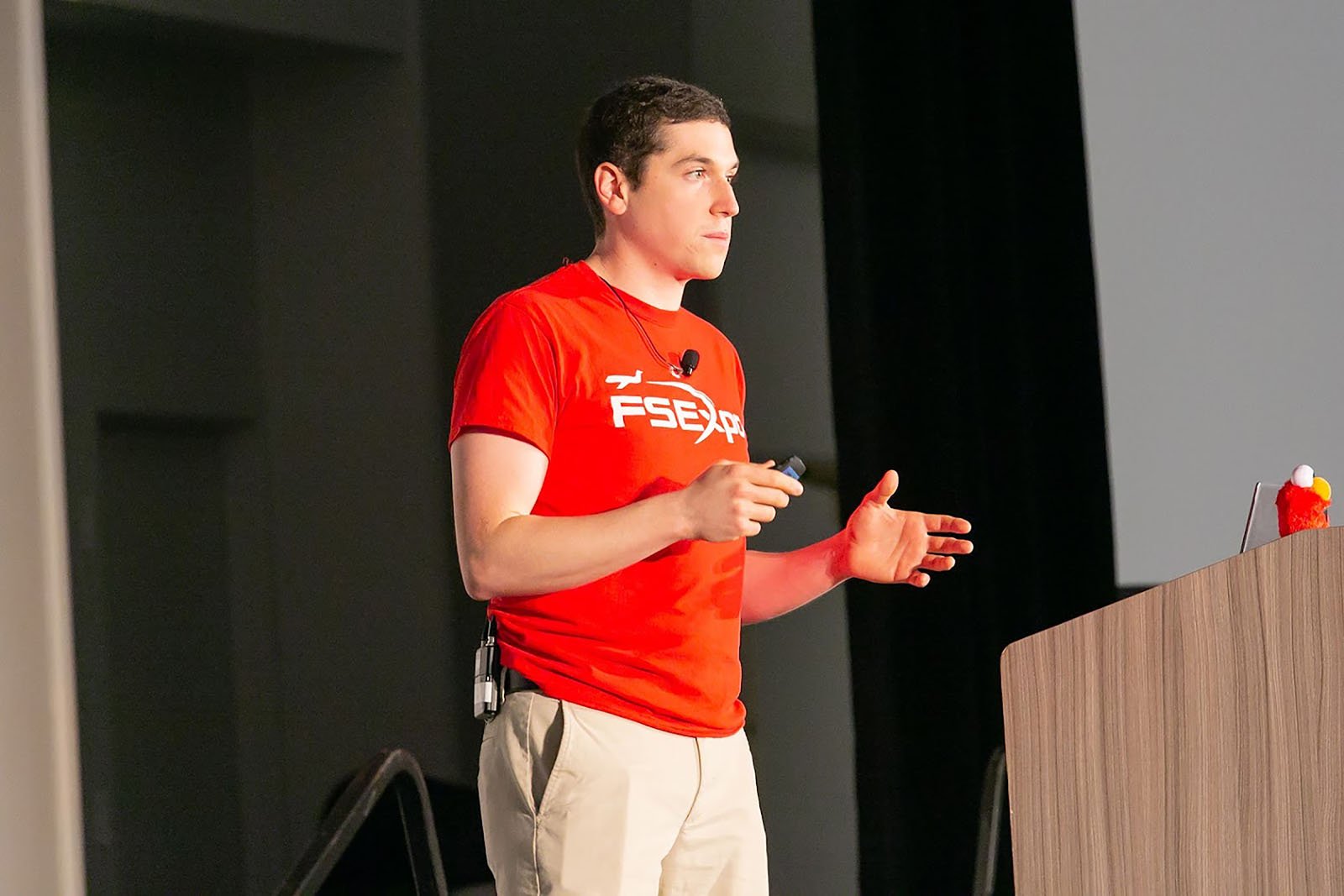 On the Monday leading up to the event, I stepped onto an aircraft bound for San Diego. It was the first time I had travelled since the beginning of the pandemic and my first time on an aircraft in more than 260 days. That’s unusual for an airline pilot such as myself who most years won’t spend more than 10 consecutive days in the same city.

I had no idea what to expect. After we had to cancel the 2020 event and reschedule FlightSimExpo 2021 to September, it felt like a lifetime since we had last been together as a flight simulation community. As I settled into the window seat, I couldn’t help but wonder what was in store for us in San Diego. After more than two years of livestreaming and video calls, how would the community feel about coming together again? And what would the show floor look like with international travel restrictions preventing some of our most popular exhibitors from participating in-person this year?

For the first time, we ran FlightSimExpo 2021 as a hybrid in-person and online event. For the former, we implemented strict COVID-19 measures that included enhanced ventilation, social distancing and individual product/screen cleaning wipes donated by iCloth. We followed the latest guidance from local, state and federal health officials, including recommending mask-wearing for all attendees (according to California rules, masks were not required to be worn at indoor events for vaccinated individuals).

Exhibitors
Fortunately, the developers who participated this year showcased some of their best products. In-person visitors could explore the large exhibition hall showcasing the latest in flight simulation hardware and software such as yokes, joysticks, virtual reality and GPS replica devices.

Putting on the biggest displays FlightSimExpo has ever seen, Honeycomb, Thrustmaster and Turtle Beach impressed the audience with plenty of new hardware devices to try. Participants also enjoyed an exclusive opportunity to try everything from the recently announced X-Plane 12 to commercial-grade helicopter simulators. Professional flight simulation organisations such as TakeFlight Interactive and Redbird along with more niche creators like Altimeter Motives and FlightSimBuilder also provided live demonstrations. The exhibition hall was busting with activity and many exhibitors commented that the show “felt busier than FlightSimExpo 2019 in Orlando”. 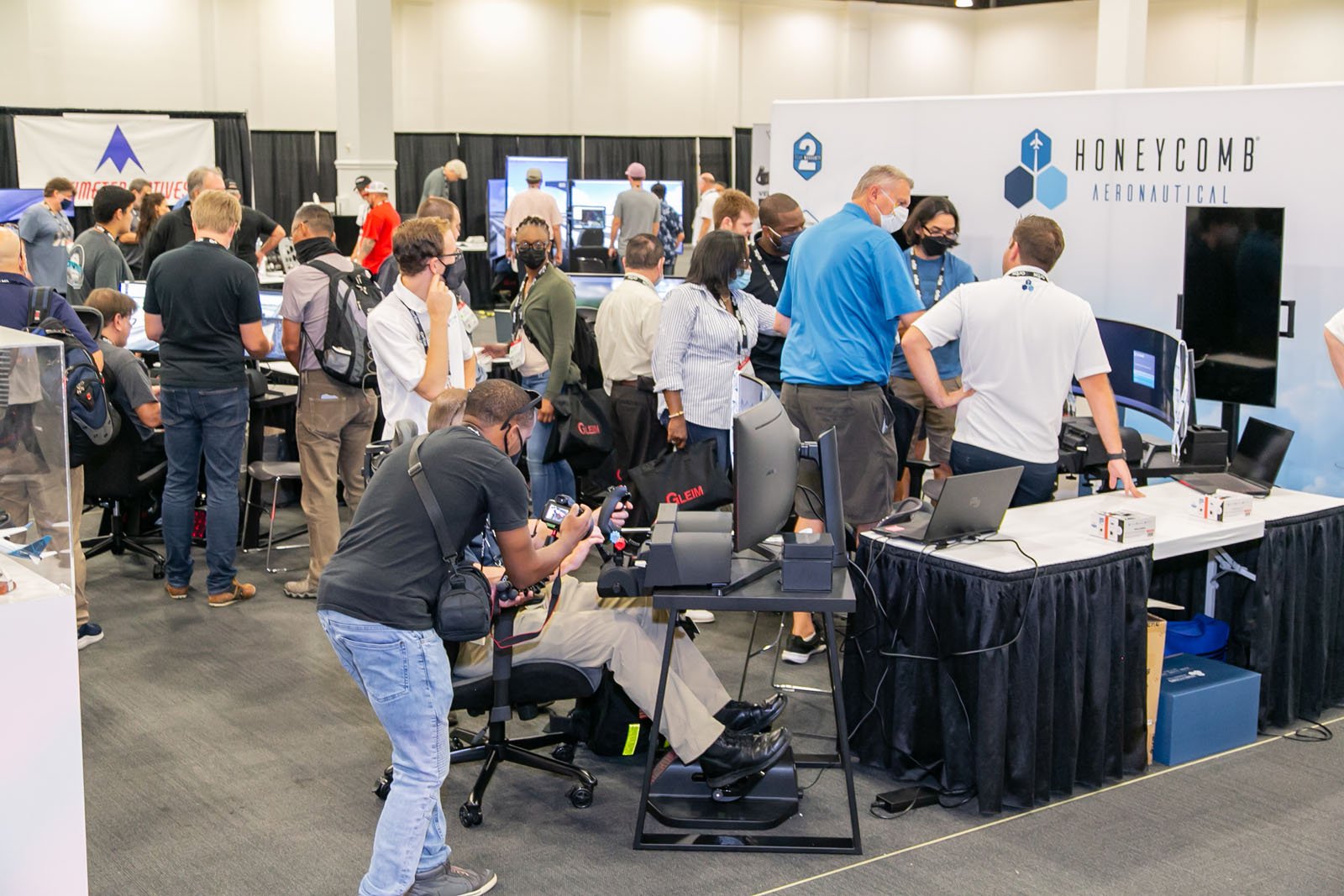 Honeycomb Aeronautical had one of the most popular displays on the show floor showcasing the Alpha, Bravo, and Charlie controllers.

Another highlight of the show was that for the first time in FlightSimExpo history, a consumer-priced force feedback yoke, developed by SIMiONIC, was on display. Although not able to attend in person, with the help of an FSA (Flight Simulation Association) volunteer in setting up the technology, SIMiONIC could demonstrate the yoke and a representative was available via video call to answer questions in real time. Thanks to this video technology, developers from around the world were able to participate in the show, even if they couldn’t attend in-person. 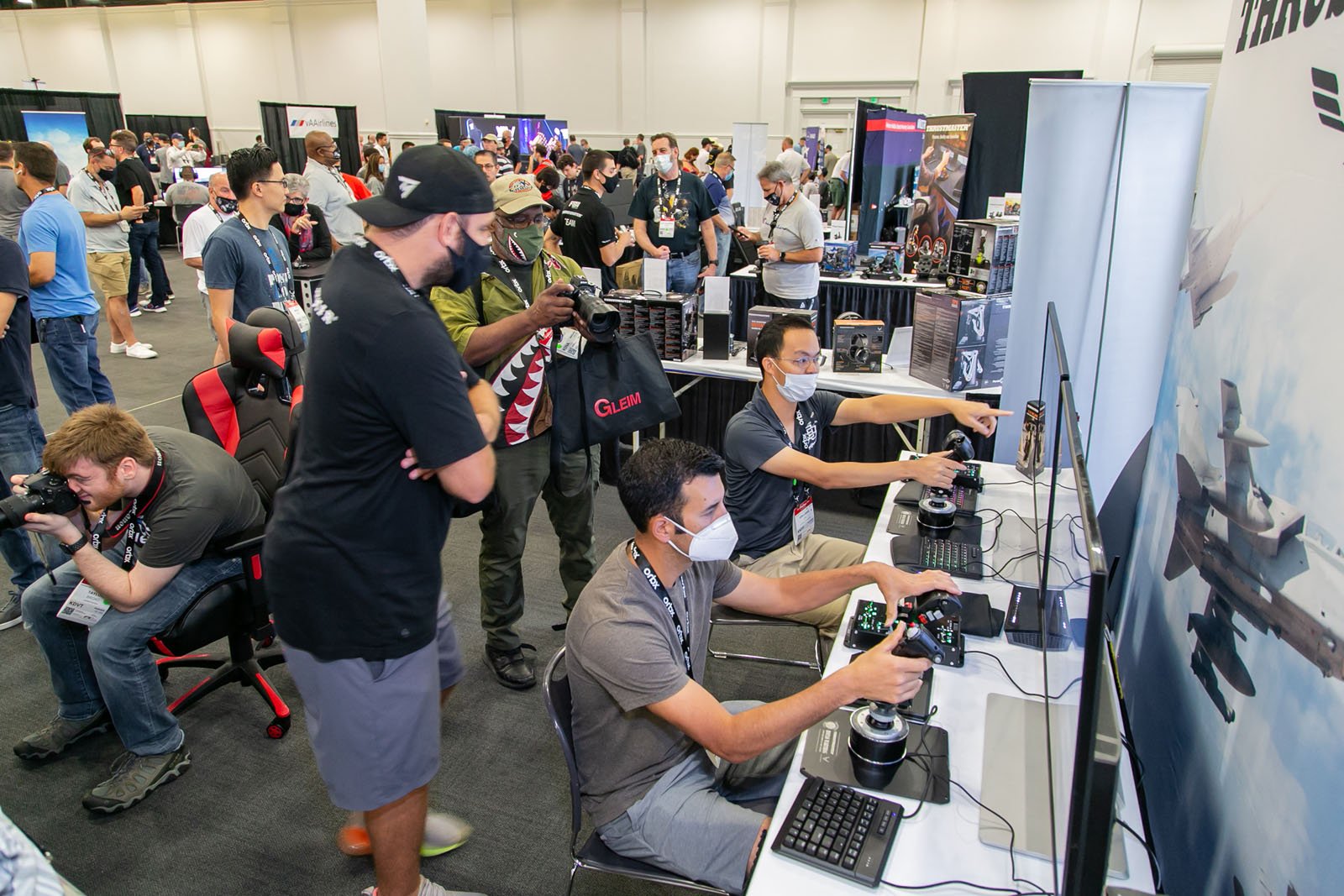 Attendees at the Thrustmaster booth checking out their flight controls. Later in the day, the new Boeing-licensed yoke was announced and a prototype was put on display for attendees could try out.

Developer announcements
A number of developers announced new products and demonstrated what they’ve been working on since the last show in 2019. One of the most highly anticipated announcements was provided by Laminar Research, who shared preview images and videos of the upcoming X-Plane 12 simulator. Thrustmaster unveiled a new Boeing-licensed yoke and Turtle Beach debuted its VelocityOne Flight Universal Control System for Xbox and PC. X-Crafts shared a preview of the upcoming E-jets series for X-Plane and FlightFactor provided information and previews on what to expect in their development pipeline. Honeycomb announced several new upcoming products alongside the launch of a new flight training academy. The team from Lockheed Martin was also on site to answer questions about what to expect from the future of Prepar3D. 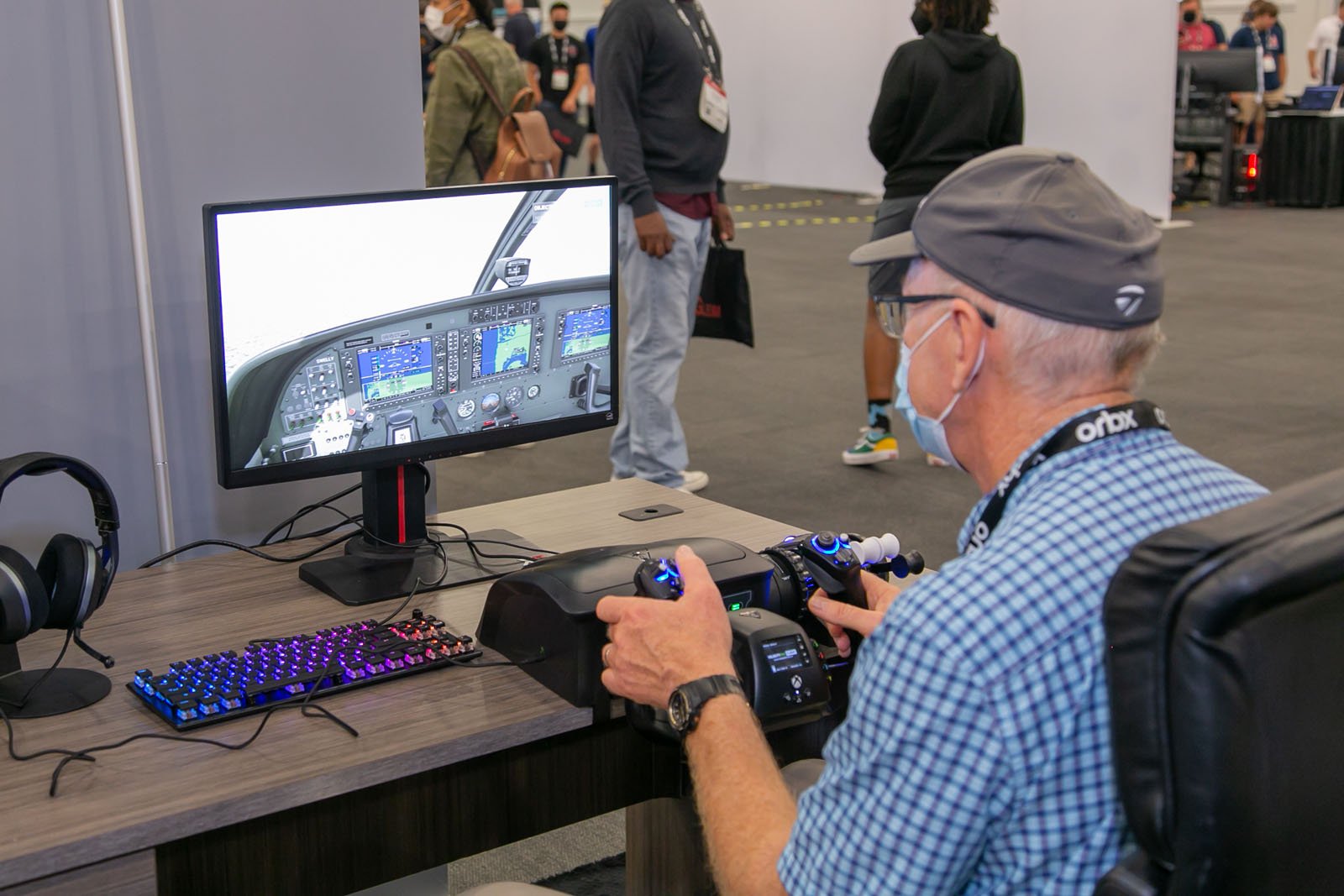 The new Turtle Beach new VelocityOne Flight Universal Control System for Xbox and PC was on display for the first time at FlightSimExpo.

Seminars
In addition to the big product announcements, FlightSimExpo has always hosted unique seminars. Topics included building a flight sim PC, home-cockpit fabrication, flight dispatch and its impact on simulation, virtual and augmented reality, and more. Twitch streamer TheFlyingFabio held an in-person AMA (Ask Me Anything) with his channel and visually impaired simmer Sarah Alawami explained how modern technology enables simulator pilots to literally fly blind. Military and government were also represented, with the US Air Force and National Transportation Safety Board discussing how simulation is used on a daily basis to train new fighter pilots and make aviation safer. 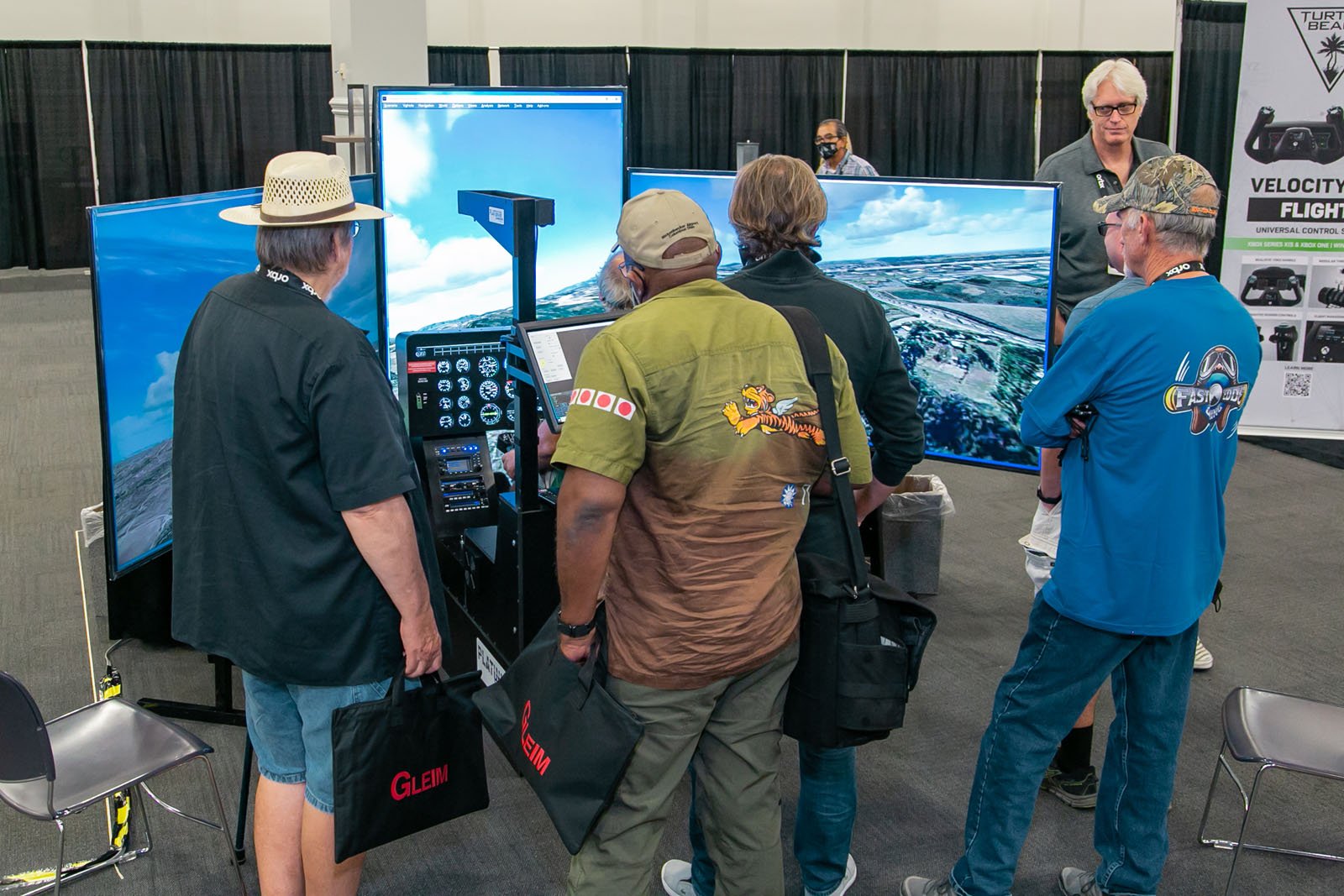 At the Platinum Simulators booth, attendees experience commercial-grade helicopter simulation, complete with a cyclic and collective.

One of the goals of FlightSimExpo is to introduce new people to the flight simulation community while showing more experienced simmers that our hobby is used in some amazing places. From FSElite’s ‘Getting Started in Flight Simulation’ to Captain Bob Flight Simulation’s detailed discussion of home cockpit building do’s and don’ts, there was a seminar for everyone. What’s even more special to me is that these seminars come from the community. Each year, we open speaking applications to experienced pilots, simmers, dispatchers, and air traffic controllers so the event can be truly community-driven.

Support from the Community
Although several developers were unable to attend the in-person event this year, that did not stop them from supporting the show. On Friday, Diamond Sponsor Orbx held a fly-in with an AMA with their CEO and a special sale to celebrate the event virtually. Meanwhile, online ATC networks IVAO, PilotEdge, and VATSIM — along with the Infinite Flight community — all helped support the show with a special ‘Fly Yourself to Expo’ events during the weekend.

Giveaway items donated by Next Level Racing, PlaneEnglish, FS2Crew, Sporty’s Pilot Shop and X-Crafts could be won by both in-person and remote attendees, while several participating developers ran contests and giveaways that were available to all attendees.

Online participants also had access to 30 presentations ranging from high-profile announcements to how-to seminars, alongside product discounts, giveaways, and network with other attendees.

With a line-up of 25 exhibitors and more than 700 visitors attending in-person, I believe the event is the largest in-person flight simulation gathering of the year. Including online participants, almost 2,000 people from 40 countries participated in the three-day flight simulation conference and trade show. Attendees watch as the pre-build version of X-Plane 12 is loaded onto a computer at the Honeycomb Aeronautical booth.

As organisers, Phil and I are so grateful to the developers, content creators, news websites and simmers who have supported this event. Many organisations, large and small, made a point of helping the show thrive, even when they could not participate in person. Whether it was sharing a short message of support in Discord, arranging a community fly-in, sharing a product trailer for us to play in front of more than 3,000 livestream viewers (thanks X-Crafts!), there were so many ways for developers to get involved.

And to the simmers who flew across the country — and even across the world — or who supported us by watching online, thank you for taking the time to share your kind words, feedback and ideas with us and the developers on-site. There’s no substitute for real-time customer feedback, especially when you’re looking the person in the eyes at the time.

Special thanks go to the team of volunteer simmers from the independent, community-driven Flight Simulation Association who helped organise the event. I’ve probably forgotten to mention several names, so apologies in advance. 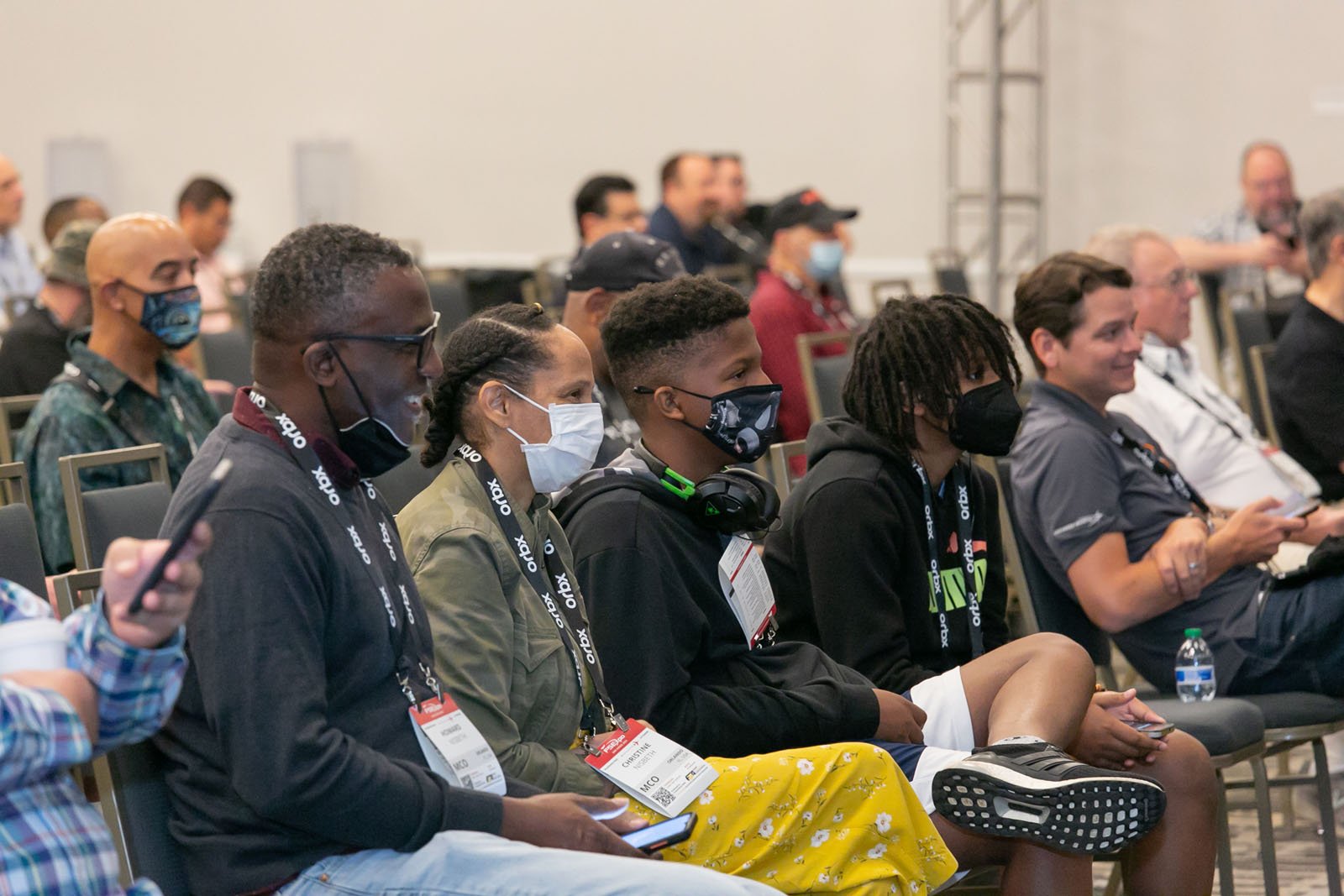 Event participants take in one of the 30 seminars that took place throughout the weekend. The show also included seminars delivered by remote presenters who were unable to attend in person.

During my closing remarks on Sunday afternoon, the emotion and passion Phil and I feel for this show was running high. Phil and I consider FSA and FlightSimExpo a passion project: something we feel the community needs and is something we’re proud to be part of. Standing on the FlightSimExpo stage on Sunday afternoon, it finally hit just how much I’d missed being able to shake hands and talk face-to-face…even if was from a bit of a distance and, in my case, with a mask on.

As the show concluded, the question on everyone’s mind was where are we going to be next year? The organisers from Flight Simulation Association are working with flight simulation developers, news websites, content creators to look at venues for the next FlightSimExpo. Options include hotels, conference centres and museums across the United States. Whether we’re back in 2022 or we wait until June 2023, I’ll be counting down the days.

The FlightSimExpo event closing presentation is available to watch via the following YouTube link: https://youtu.be/-xjuqLSoLBk. You can also find the Prepar3D Q&A alongside recordings of all 30 event seminars at www.flightsimexpo.com.

If you wish to stay connected with the community surrounding the show, you can join Flight Simulation Association for free at www.flightsimassociation.com and follow them @FlightSimExpo on social media.