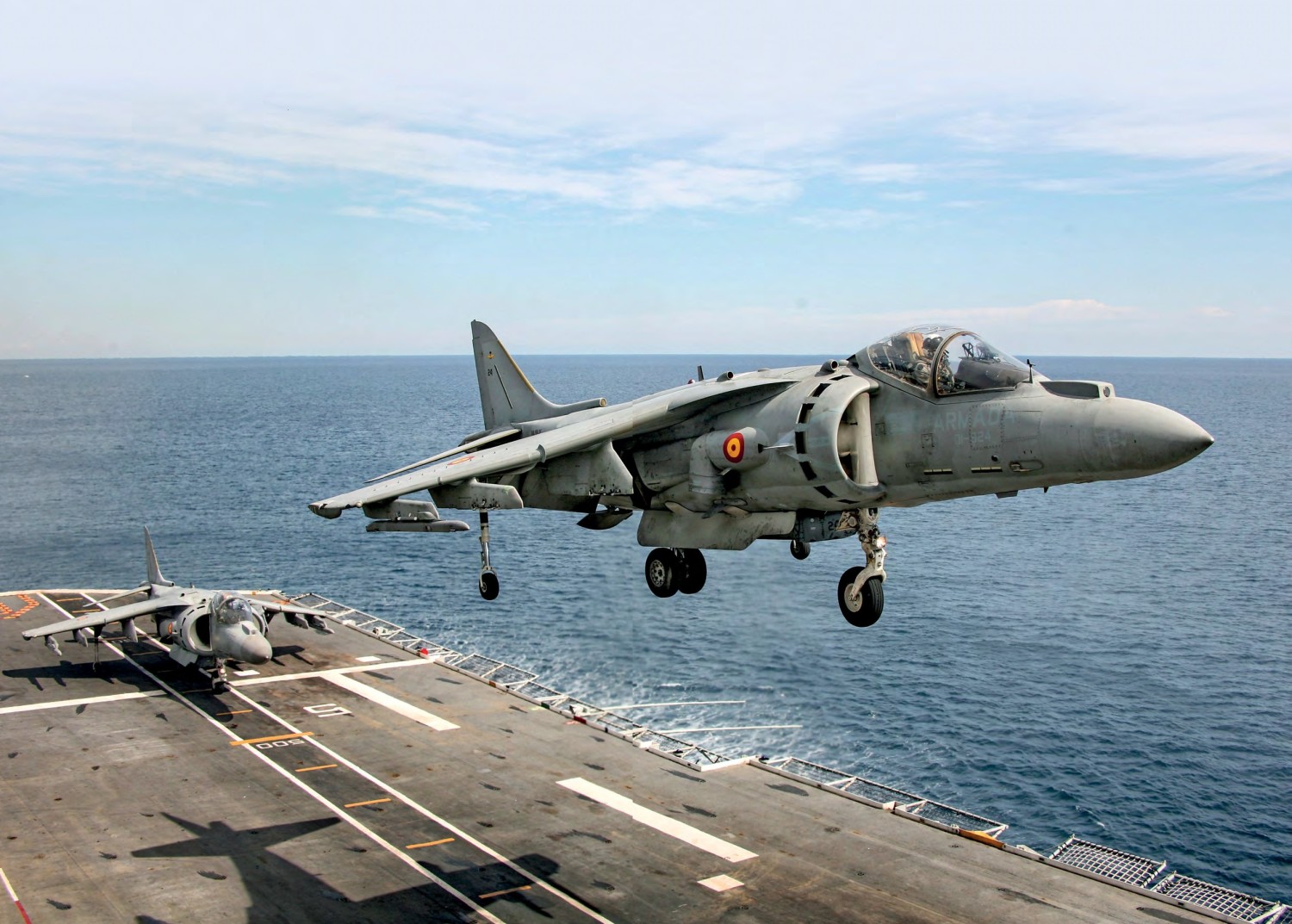 Although there has been no official statement made, the Armada’s preference for a replacement for the AV-8B+ Harrier is the F-35B Lightning II. Is there any other choice?
All photos Roberto Yáñez unless otherwise noted

The official act to commemorate the centenary of Spanish naval aviation took place on September 15, 2017.

Created by Royal Decree in 1917 by the then monarch Alfonso XIII, the Aviación Naval, later renamed Aeronáutica Naval, has passed through various stages during its 100 years of existence, from the initial splendour of operating more than 100 aircraft and a seaplane tender to the current day where the Flotilla de Aeronaves (FLOAN or aviation flotilla) perpetuates the traditions and history of the embarked aviation units while maintaining its operational capability and power projection role through the Barco de Proyección Estratégica (BPE or strategic projection ship) Juan Carlos I (L61).

Since 1957, the FLOAN has operated from Rota Naval Base when construction of the hangars and support infrastructure for the incipient Flotilla de Helicópteros (helicopter flotilla) started.

Little by little, new escuadrillas (squadrons) were formed as new machines were taken on charge; 52 are currently in service. In 1976, the Arma Aérea de la Armada received its first combat jets, AV-8A Matadors, assigned to the currently disbanded 8 Escuadrilla and at this time the Flotilla de Helicópteros became the Flotilla de Aeronaves.

The current Commander of the FLOAN, Captain José Luis Nieto Fernández, is responsible to the Admiral Commander of the Fleet for the preparation of its units and centres. Approximately 1,000 military personnel are under his command, of which 76 are active pilots assigned to seven operational escuadrillas, four equipped with helicopters, two with fixed-wing aircraft and one (the most recent unit to be established) with UAVs and target drones. Eleven escuadrillas have served the Arma Aérea since its establishment.

Another important component is a team of naval tactical coordinators and navigators embedded in the Ejercito del Aire’s P-3M Orion-equipped Grupo 22, part of Ala 11, who form part of the crews.

In the last year, the FLOAN flew more than 8,000 hours, almost 3,000 of which were flown in various peacekeeping or maritime security missions, such as Operations Atalanta, Active Endeavour and EUNAVFORDMED Sophia, or flying in diverse national and international exercises, such as Dynamic Mongoose, Joint Warrior and CONTEXPHIBEX. Such undertakings give an idea of the operational capability and power projection capacity of the Armada.

Providing essential support to the flying units is an organisation capable of providing up to second level maintenance support; any work that cannot be done locally is undertaken by industry. A centre at Rota equipped with flight simulators for the AV-8B+ Harrier and SH-60B Seahawk serves not only FLOAN pilots, but also crews from allied countries who have agreements to use them. Lastly, since 2010 the Centro de Supervivencia de la Armada (CESUPAR or Armada Survival Centre) has been training aircrew, passengers and rescue swimmers in how to escape from a submerged helicopter. 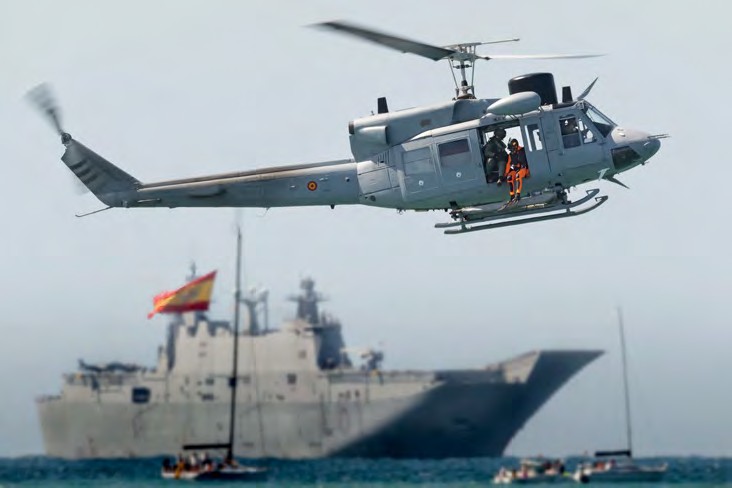 The primary role of the AB212+ is to support the Marines. 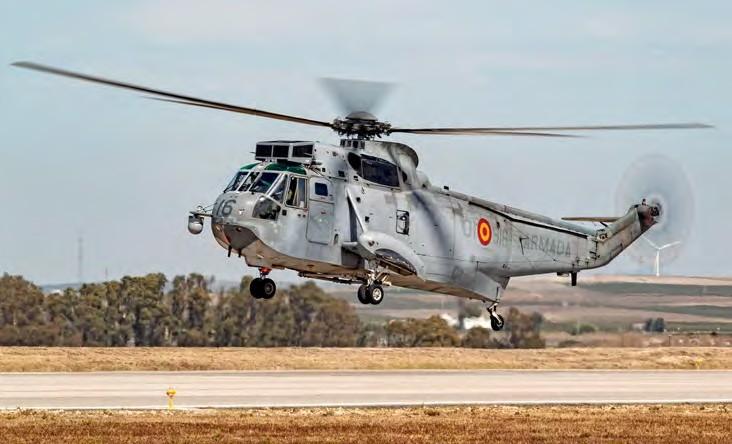 The Seahawk is the primary helicopter embarked on the Armada’s frigates.

Each of the seven current operational escuadrillas has assigned specific missions and equipment.

The 3 Escuadrilla was created in 1964 with the arrival of the anti-submarine warfare (ASW) configured Agusta Bell AB204. The four aircraft remained in service until 1979, after they had been replaced with 14 ASWconfigured AB212s, the first of which was delivered in 1974. In addition to the primary ASW role, thanks to the navigation and avionics systems, the AB212s were also used for anti-surface warfare, communications, transport, rescue, medical evacuation (MEDEVAC) and support to amphibious operations. Four aircraft were also modified to undertake electronic warfare missions.

Between the end of the 1980s and the beginning of the 1990s, 3 Escuadrilla underwent a reorganisation and was tasked with new missions principally to support the Spanish Marines. All aircraft assigned to the unit were modified, with the removal of unnecessary avionic equipment and the installation of new self-protection systems.

The modifications have also changed the unit’s role, which is now to operate from the decks of the new Buque de Acción Marítima, as well as providing support to special operations and amphibious forces.

For aircrew, the highlight of the modification programme are four digital screens in the cockpit, developed by Babcock MCS España and Sener in Albacete, were the Armada pilots received training on the AB212+.

Currently, five helicopters have been delivered and are operational; two more aircraft are undergoing work and will be delivered in 2018. 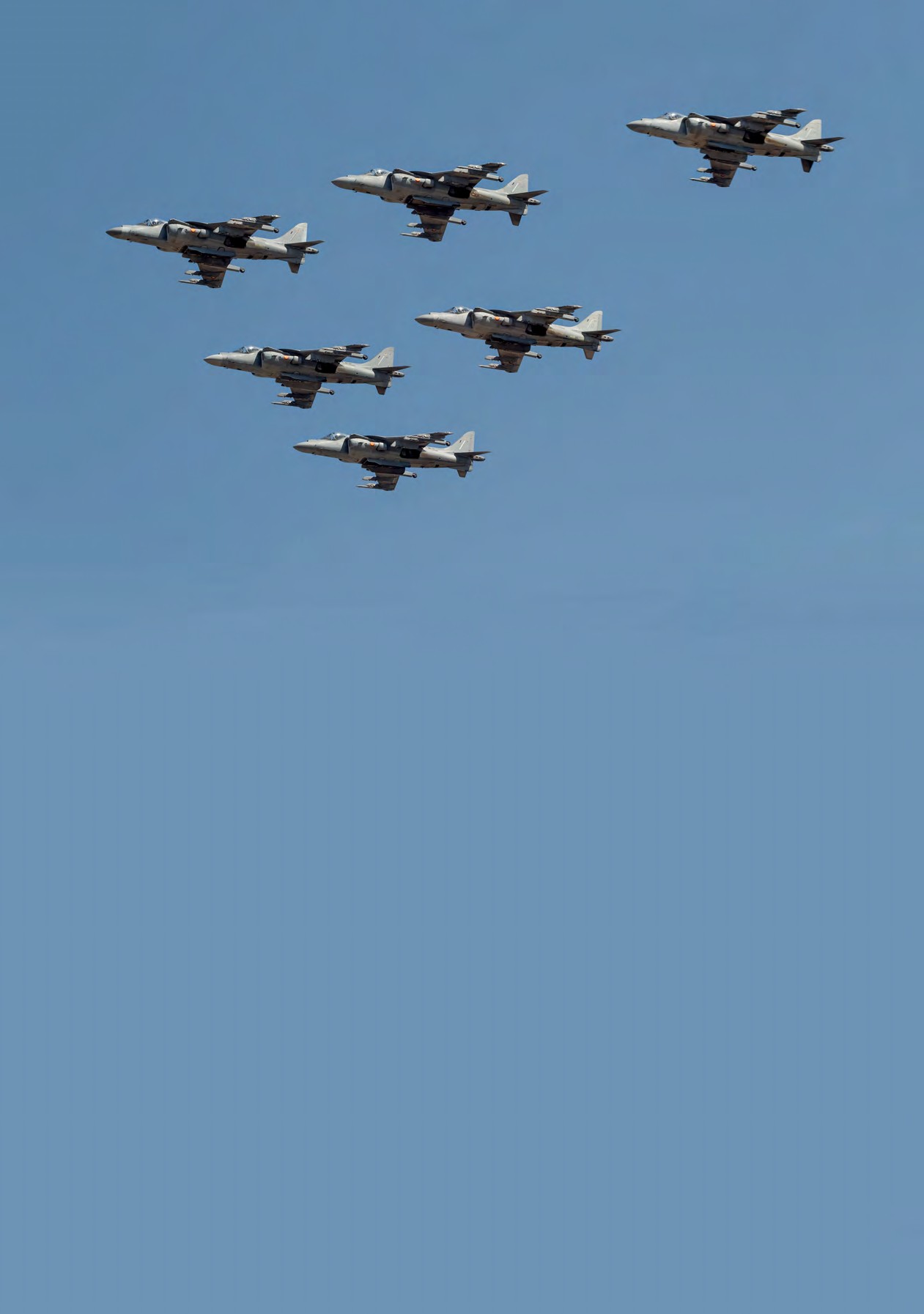 Six AV-8B+ Harriers from 9 Escuadrilla in formation as part of the events commemorating the centenary of the Arma Aérea de la Armada. 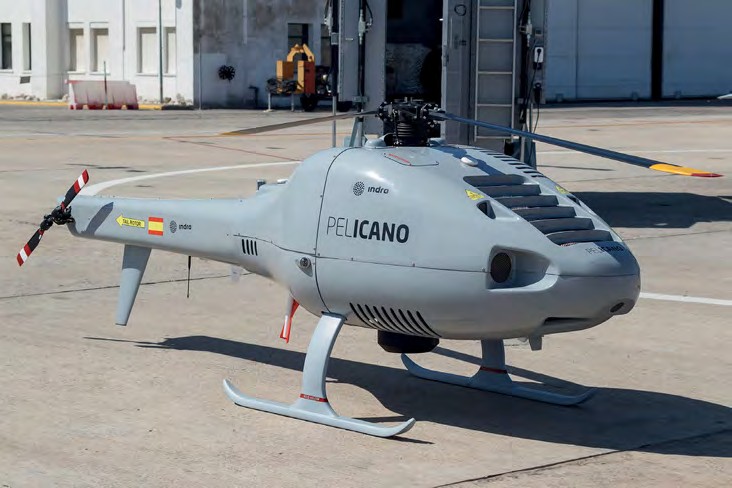 Built by Spanish firm Indra, the Pelicano UAV was tested by the Armada in 2017 as a potential surveillance aircraft. 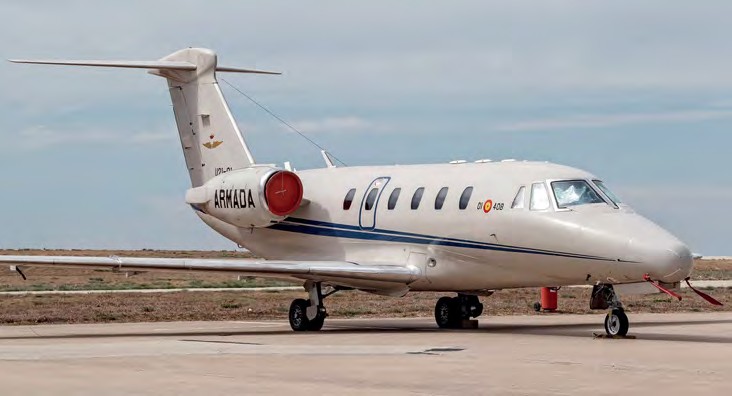 The 4 Escuadrilla provides logistics support for Armada operations with a small yet efficient fleet of Cessna Citation corporate jets, specifically three Citation IIs and one Citation VII. The unit is tasked with providing VIP airlift, personnel and cargo transport, calibration of ship systems, casualty evacuation (CASEVAC) and MEDEVAC flights and occasionally maritime patrol. The unit has the ability to have an aircraft constantly in the air for 24 hours and launch a second aircraft after 48 hours.

The Citation IIs have recently undergone modernisation with the installation of AdViz glass cockpit multifunction screens, which allow for the simultaneous display of flight and engine data, among other improvements.

The three Citation IIs entered service in the 1990s and in 2007 were complemented by a Cessna 650 Citation VII, a model with better performance, especially speed and range.

The 5 Escuadrilla was formed in February 1966, with ASW as its primary mission. Between 1966 and 1981, the unit received a total of 18 SH-3Ds. In 1988, three helicopters were modified to SH-3W standard with installation of the Thorn-EMI Searchwater airborne early warning radar in order to provide air surveillance protection to the ships in the Grupo de Combate (Combat Group); they remained in service until 2016.

Despite its age, the Sea King has proved to be a versatile and efficient platform, as demonstrated by a change in mission for the unit starting in 2001, when the SH-3D switched mission set from ASW to tactical troop transport. To meet requirements of the new task, the Sea Kings underwentmodernisation that included installation of a multisensor imaging sensor, CCD cameras, NVG compatibility, medical kits and mounts for 7.62mm mini machine guns. The helicopters are also equipped with cargo winches and an external hook for the vertical replenishment role.

During the course of its long operational career, the Sea King has undertaken many roles with the Armada. Currently, the type is used for tactical troop transport.
Armada Española

The Armada’s future helicopter will be a navalised version of the NH90, assigned to 5 Escuadrilla. Prototype NH90 GSPA01 during tests fitted with armament mounts undertaken at the Airbus Helicopters factory in Albacete.

Apart from amphibious assault, 5 Escuadrilla is also tasked with maritime interdiction, CASEVAC, MEDEVAC, SAR and special operations support. The unit is also certified with a Special Operations Air Task Unit – Rotary Wing capability; in other words, it is trained and certified to provide aviation support to special operations forces.

Currently, 6 Escuadrilla comprises six of the 14 Hughes 500 helicopters delivered between 1972 and 1977. Initially, the type acted as a light anti-submarine helicopter, flying from the flight decks of the Churruca class destroyers. When the destroyers were retired and with the arrival of more capableanti-submarine helicopters, the type switched over to a training role, as well as providing support to ships and to the Marines. In 2014, these helicopters received new avionics and modern cockpit instrumentation. 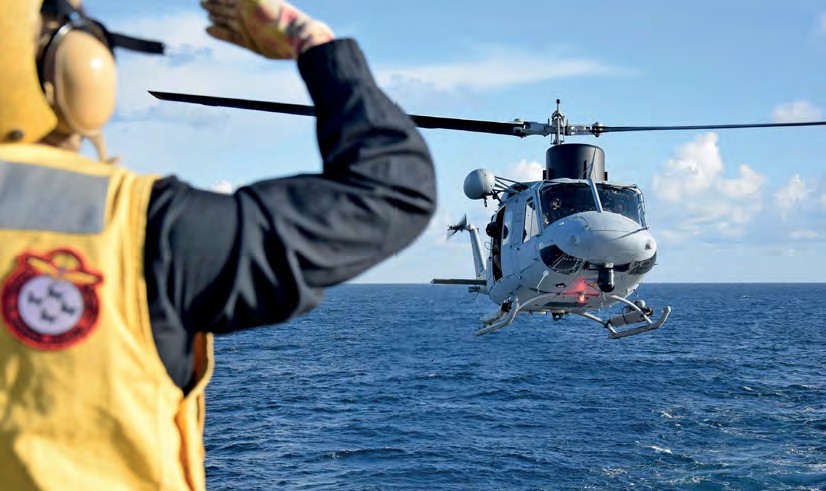 An AB212+ landing on the deck of the frigate Canarias (F86). The type is regularly used for surveillance missions.
Armada Española 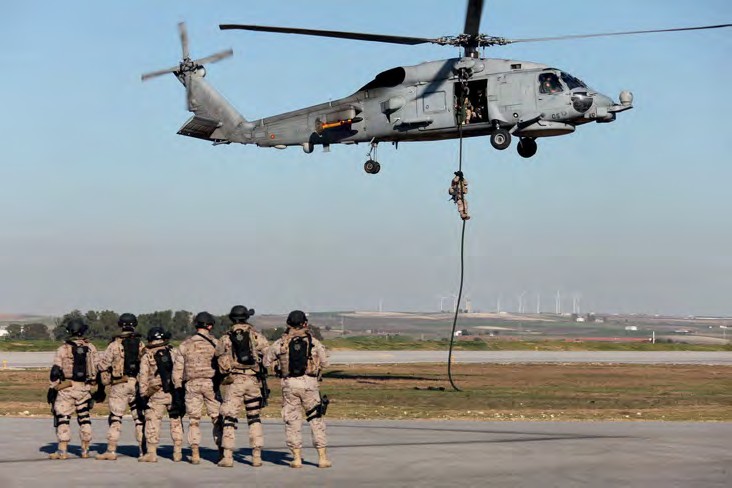 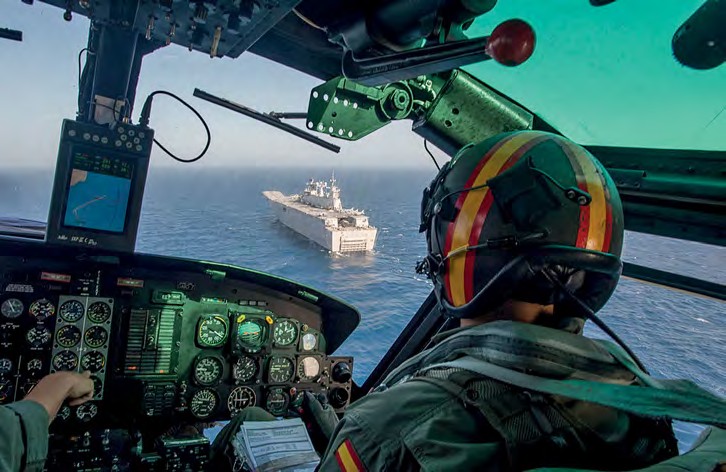 An AB212 about to land on the flight deck of the strategic projection ship Juan Carlos I (L61), which replaced the aircraft carrier Príncipe de Asturias (R11) as the Armada’s flagship. Armada Española

Thanks to Spain belonging to a partnership between the three nations that still fly the Harrier, the dozen examples in service remain up to date with the latest capabilities to operate in today’s environment. Despite this, the Lockheed Martin F-35B Lightning II is being considered as a replacement, although there is no official word on this.

The FLOAN’s 10 Escuadrilla stood up in 1988 when the first Sikorsky SH-60B Seahawk helicopters arrived at Rota. October 2002 saw the arrival of six additional Block I aircraft, while at the same time the six original helicopters were modernised to bring the fleet up to a common standard and designated SH-60B Block I Core B.

The Seahawk is the principal helicopter of the Unidad Aérea Embarcada (UNAEMB or embarked aviation unit) assigned to Álvaro de Bazán class (F100 class) air defence frigates and the future F110 class frigates. The Seahawk extends the ship’s radius of capability beyond the horizon when conducting surface and undersea warfare roles. Other missions flown by the Seahawk are maritime interdiction, support to special forces, SAR, MEDEVAC, vertical replenishment and vertical onboard delivery, communications relay and naval surface fire support.

The unit is currently in the process of receiving another six helicopters, former US Navy SH-60F Oceanhawks, the first of which is already at the Rota Naval Base. Although the SH-60F models are being initially assigned to 10 Escuadrilla due to their similarity to the Seahawk, the F-models will replace the Sea Kings belonging to 5 Escuadrilla until such time that the Armada can purchase a navalised version of the NH90. Armada SH-60Fs have been configured in the United States to operate as a pure tactical transport, with a capacity to carry up to 11 fully equipped Marines, plus a crew of three.

Lastly, 11 Escuadrilla, based at the former gunnery range at Torregorda, Cádiz, is the most recent unit to be formed and brings together UAV and, in the near future, the remotely controlled aerial targets currently assigned to the Agrupación de Blancos de Tiro Naval (ABTN or naval gunnery targets group). Its mission is to improve the fleet’s intelligence, surveillance and reconnaissance capability and to provide targets for training and gunnery exercises.

The Arma Aérea de la Armada currently comprises a modest, yet capable, fleet of aircraft and helicopters. Looking to the future, acquisition of new aircraft such as the NH90 and the F-35B Lightning II is possible. Both types would greatly increase the ability to project power from the sea in various theatres of operation.