As part of the US Army’s large-scale recapitalisation of its aviation assets, it’s preparing to choose its next-generation medium-lift helicopter under the FLRAA programme, as Khalem Chapman reports.

FLRAA seeks to provide a successor to the venerable UH-60 Black Hawk twin-engine, medium-lift utility helicopter. Developed by Sikorsky, the UH-60 first flew in October 1974 and joined the US Army’s ranks with the 101st Combat Aviation Brigade in June 1979. More than 1,000 examples have been delivered to the service, with multiple variants serving throughout a 40-year operational career. The army has outlined that the FLRAA platform must have enhanced characteristics compared with the UH-60, including increased speed, range, mobility and payload capacity, along with greater reliability, sustainability and survivability. Although the FLRAA programme is gathering pace, development of the Black Hawk is continuing, with the service planning to convert 760 UH-60Ls to UH-60V standard from US Fiscal Year (FY) 2019.

In a request for information (RFI) issued in April 2019, the US Army detailed its need for a “solution that is operationally effective, suitable and survivable in a 2030 threat environment.” It seeks a platform which has the potential to increase its capabilities – following a modular open-systems approach – and maintain its relevance over a 50-year useful lifespan. It must also be in line with the army’s affordability objectives, including an average unit manufacturing cost capped at US$43m. The service aims to field the FLRAA by early 2030, two years after it plans to accept the first operational examples of its FARA platforms.

In August 2014, prototypes from AVX Aircraft and Karem Aircraft were dropped from the FLRAA selection process, leaving just two contenders: the Bell V-280 Valor and the Sikorsky/Boeing SB>1 Defiant. Both are currently undergoing flight tests under the US Army’s Joint Multi-Role Technology Demonstrator (JMR TD) programme.

Dan Bailey, programme director of Joint Multi-Role Future Vertical Lift (JMR FVL) at the US Army’s Aviation and Missile Research, Development and Engineering Center (AMRDEC), said: “The intent of the JMR TD effort is to maximise the knowledge gain and risk reduction toward an anticipated [FVL] acquisition.”

The US Marine Corps (USMC) is tagging along with the US Army-led FLRAA programme as it seeks to replace its Bell UH-1Y Venom twin-engine, medium-lift utility helicopters. The Venom first flew in December 2001 and entered service with the USMC in 2007. The marines currently operate 141 UH-1Ys from a total of 165, with 12 in storage, seven lost to attrition and five examples withdrawn from service.

According to the army’s RFI in April 2019, the USMC’s acquisition programme is scheduled to begin two years after the army’s. The document also notes that the marines seek to procure a total of 349 aircraft.

An attack variant of the FLRAA platform is also being sought by the USMC. This should be capable of employing both internal and external weapons, including a fixed or turreted gun system, guided/unguided rockets, air-to-air missiles, air-to-ground missiles – such as the AGM-114 Hellfire and AGM-179 Joint Air-to-Ground Missile (JAGM) – and the ability to deploy unmanned aerial vehicles (UAVs).

The US Special Operations Command (SOCOM) is also piggybacking on the FLRAA programme, seeking to employ the platform in special operations missions. This follows the requirements set out by the US Army (see table), but adds that the aircraft must be configurable for transport aboard a single C-17A Globemaster III.

The Bell V-280 Valor is a compound tiltrotor design and an airworthy prototype, registration N280BH (c/n 60105), was first flown on December 18, 2017 at the company’s facility in Amarillo, Texas. Since then, it has undergone a rigorous test campaign with US Army pilots, amassing more than 150 flight hours. The V-280 achieved multiple milestones during testing, from reaching true airspeeds of 300kts (345mph/ 555km/h) to assessing fast rope deployment options and low-speed agility. 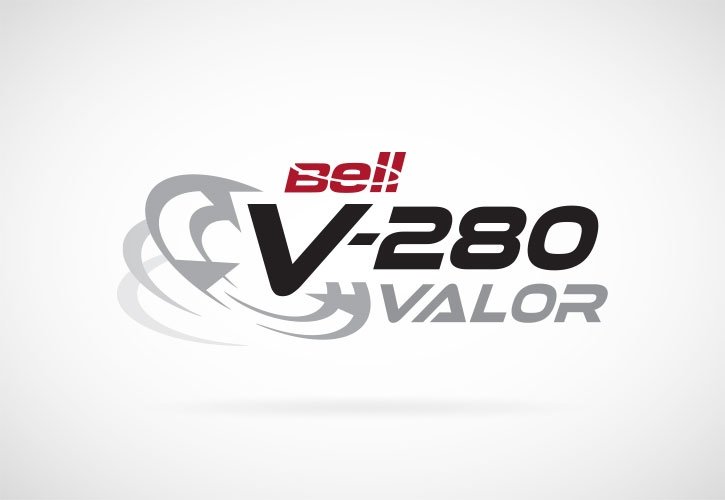 On December 18, 2019, the platform flew autonomously for the first time in a demonstration in front of army representatives and members of the press. The display consisted of two sorties, with the aircraft performing an unmanned take-off and landing. It also autonomously converted between cruise and vertical take-off and landing modes, performed loiter manoeuvres and precisely navigated through various waypoints.

Keith Flail, vice president of Advanced Vertical Lift Systems at Bell, said: “The V-280 and flight test [programme] teams’ performance have gone above and beyond expectation. Our talented employees are innovators who have reimagined how vertical lift can help [modernise] the army. We are proud of what the V-280 and Team Valor have achieved in [six] short years and look forward to building on our success to bring next-generation capability to the warfighter in the coming years.”

The Valor employs a fly-by-wire flight control system, has an air-to-air refuelling capability and features a retractable undercarriage. The company says it is “building on 450,000 hours of tiltrotor experience” to reduce sustainment costs through focused systems and component redesign.

This experience comes via Bell’s V-22 Osprey, the first tiltrotor to enter operational military service, a joint venture between Bell and Boeing Defense in the early 1980s. The type is currently in service with the US Air Force (USAF) and USMC, with the US Navy receiving its first examples earlier this year and the Japan Ground Self-Defense Force (JGSDF) operating five MV-22Bs for flight testing in the US as of December 2018.

The V-280 has flown test flights using the Lockheed Martin’s Pilotage Distributed Aperture System (PDAS) mission equipment package. The PDAS is a survivability suite that provides a 360° situational awareness sphere around the aircraft, supplying real-time, multi-spectral fused imagery to the pilots and crew through head-tracked, high-resolution helmet-mounted displays. The system uses a network of sensors distributed around the aircraft and it has a modular open systems architecture (MOSA) for the rapid integration of new technologies.

To reduce complexity, the company adds that it will employ a “revolutionary approach to manufacturing and reducibility for [the Valor’s] blade, wing and cabin assemblies”, along with using a “commercially proven maintenance approach” by providing extended upkeep in a scheduled environment.

Developed in a partnership between Sikorsky and Boeing, the SB>1 Defiant, N100FV (c/n 100-0001), made its inaugural flight on March 21, 2019, just over a year after the V-280. This delay was due to issues with blade production, specifically setting up the automated fibre placement tooling to manufacture the composite rotor blades. Then a fault was discovered with the gearbox in the propulsion system test bed (PSTB), which validates the capability of all of the major systems, including the dynamic drive and rotors. 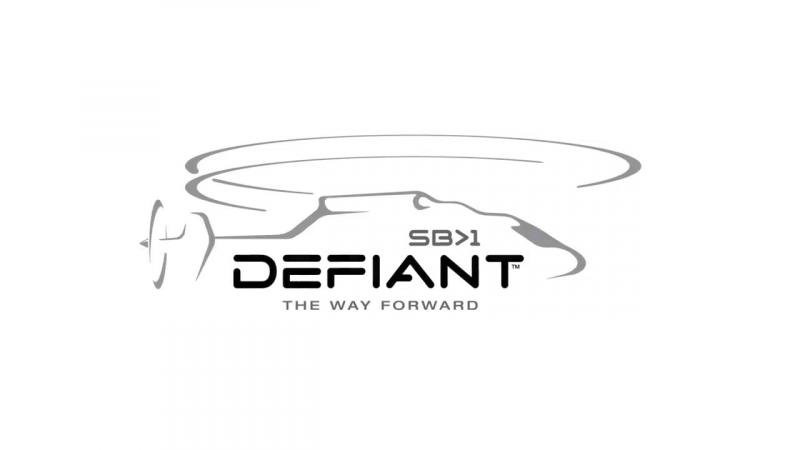 As with Sikorsky’s FARA contender, the Raider X, the SB>1 employs the technology used in the X2 experimental high-speed helicopter. The SB>1 consists of a compound, blended fuselage, with a lift offset coaxial main rotor and pusher propeller to enhance manoeuvrability and ensure higher speeds during flight. It also features an advanced rigid rotor system with manually foldable rotor blades, cabin space for up to 12 combat-equipped troops, an advanced drive system, retractable undercarriage, fly-by-wire flight controls, along with active rudders, elevators and vibration controls. It requires a crew of four, but will also be able to team up with autonomous aircraft, providing the US Army with capabilities not currently available to the service with its current inventory.

The SB>1 will employ new technologies to provide self-monitoring and condition-based maintenance to increase the platform’s operational availability and enable it to be more flexible in service. It will be part of an already established supply chain to reduce overall life-cycle costs while increasing efficiency and decreasing the time it takes for new systems, such as sensors and weapons, to be integrated onto in-service examples using a MOSA-based approach. Sikorsky/Boeing add that its platform follows a state-of-the-art digital design by utilising X2 technology to provide “unmatched capability growth potential, unbound by the same limits of physics holding back traditional helicopter designs.”

As with the Bell V-280, the SB>1 is currently in the middle of a flight test campaign at Sikorsky’s Development Flight Test Center in West Palm Beach, Florida, during which it has exceeded 100kts (115mph or 185km/h) and has performed manoeuvres at 30° angle of bank. Sikorsky and Boeing believe the aircraft will be able to reach top speeds of 250kts (287mph or 463km/h), exceeding the US Army’s requirements.

Both teams from Bell and Sikorsky/Boeing are continuing their respective test campaigns, developing the technology, maturing the platforms, reducing technical risks and expanding their flight envelopes. The V-280 is ahead in its test series, having not been hit with the technical issues and delays that arose on the SB>1.

In recent news, the US Army has made it clear that it will not wait for the SB>1’s development catch up with the V-280. According to a report from Breaking Defense, US Army Secretary Ryan McCarthy said: “The world is incredibly complex. We don’t have the time or luxury to wait for people. They’ve got to keep pace with us if they want to do business with us.”

However, Maj Gen Thomas Todd, the Army’s Program Executive Officer (PEO) for Aviation, pointed out that just because Bell has more data does not mean it will almost certainly win the contract: “One of the things we’ve done in the past is we’ve waited until everybody was… in the same place. We don’t want to do that. What we want to do is encourage industry to move as fast as possible. The advantage that any of them have if they choose to have aggressive schedules… is ultimately they burn down risk. We want them in a place where we have at least good test data.”

As the current schedule stands, the US Army is expected to have already awarded the project teams a competitive demonstration and risk reduction (CDRR) contract. The service is due to select a winning design in 2022 and aims for the platform to phase out its UH-60 aircraft and enter operational service from the start of the next decade. The US Army has more than 1,500 examples of Black Hawk helicopters in its current inventory. With the service actively upgrading 760 aircraft to UH-60V standard over the next decade, it may see a lower FLRAA order placed as the enhanced Black Hawks could compliment the V-280 or SB>1 in service well into the 2030s.