Flying to Antarctica by Hercules

On December 14, 2017, a Fuerza Aérea Uruguaya (FAU or Uruguayan Air Force) Lockheed C-130B Hercules landed for the first time at the Argentinian Marambio Antarctic Base on Marambio Island in the Waddell Sea, 1,944nm (3,600km) from Buenos Aires. The aircraft tasked for the mission was C-130B FAU 591 (c/n 282-3668, former US Air Force 61-0971). In service with Uruguay since May 22, 1992, it is one of two C-130Bs belonging to Escuadrón Aéreo No.3 (Transporte) (Air Squadron No.3 (Transport)) part of Brigada Aérea I (Air Brigade I) which is based at Montevideo’s General Cesáreo L Berisso international airport.

The Antarctic flights are in support of the work of the Instituto Antártico Uruguayo (IAU or Uruguayan Antarctic Institute). They are carried out every year during the southern summer and autumn. FAU 591 carried personnel and supplies from Montevideo to its main station in the White Continent, the Base Científica Antárctica Artigas (BCAA or Artigas Antarctic Scientific Base). Founded on December 22, 1984, and located on King George Island, South Shetland Archipelago, 1,620nm (3,000km) from Montevideo, it is one of two Uruguayan bases in Antarctica and is inhabited throughout the year.

The route flown from Montevideo, was via Mar del Plata, Viedma and Comodoro Rivadavia (Argentina) arriving at Punta Arenas, Chile after five hours in the air. The aircraft stayed overnight there while its cargo was reconfigured before the two-and-a-half-hour crossing of the Drake Channel to King George Island.

The BCAA has no runway, so Uruguayan aircraft operate from the nearby Chilean airfield Teniente Rodolfo Marsh, located 2.15nm (4km) west of the BCAA. Weight and balance problems have to be solved before the aircraft makes its way to the base. The total weight of aircraft and cargo on take off must be no more than 130,000lb (59,000kg) because the landing weight at Teniente Rodolfo Marsh airfield must not exceed 118,000lb (53,000kg). Given a fuel consumption of 4,800lb/hour (2,177kg/hour) the C-130B reaches the base at the correct landing weight.

Supplying the BCAA is a joint military effort, also supported by the Uruguayan Navy. The command and control ship ROU 04 ‘Artigas’, participated in the Antarkos XXXIV mission, taking 210,000lb (105,000kg) of cargo and 50,000 Imperial Gallons (226,000 litres) of Antarctic gas-oil. In previous years Aviación Naval Uruguaya (ANU or Uruguayan Naval Aviation) helicopters were deployed onboard the ROU 04, however the ANU has retired its six Eurocopter Bo105PAH1s whilst the only Helibras AS355F2 Esquilo was in maintenance.

Whilst FAU 591 was in Punta Arenas, an unusual situation arose when the Fuerza Aérea Argentina/FAA (Argentine Air Force) requested support from its Uruguayan counterpart to carry cargo from Rio Gallegos (Santa Cruz province) to Marambio. Founded in October 1969, Marambio is the foremost of Argentina’s several scientific and military bases in Antarctica.

The request for assistance was made through pre-existing communications channels set up to improve cooperation between Air Forces in the region. The request for support was driven by the temporary unavailability of Argentine cargo aircraft that could make the trip to Antarctica. Despite a programme to modernise its C-130s, none was available. One aircraft that has already undergone an upgrade in the United States of America, Falklands veteran TC-69, was damaged on December 2, 2017. Unable to land in Marambio because of adverse meteorological conditions, its crew decided to return to Rio Gallegos, its departure point. A fault on its Flight 2 digital system, caused the engines to stay at a high-power setting on landing. The crew shut them down whilst applying emergency braking and that caused a fire and damage in the main landing gear bay area. The American firm L3, that completed the refurbishment, issued a global light ban to all modiied aircraft, until completion of an investigation. Aircraft TC-61, that had also been upgraded under the same programme, was therefore grounded in Rio Gallegos and was available to fly to Marambio only in the case of a dire emergency. The remainder of the FAA’s Hercules leet was also unavailable, mainly due to maintenance reasons, TC-64 having entered a scheduled inspection the previous week. 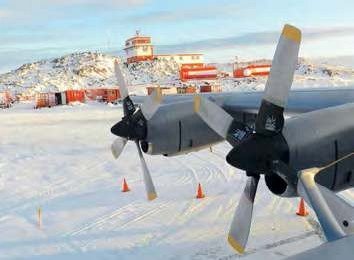 The Chilean Tte. Marsh base and aerodrome are utilised by FAU C-130 aircraft to supply the Uruguayan Artigas Base, located 2.15nm west of the aerodrome. 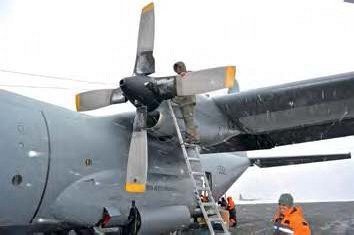 A hard job for the aerotécnicos (technicians); inspection of the Allison T56 engine and propellers during harsh meteorological conditions in Antarctica. 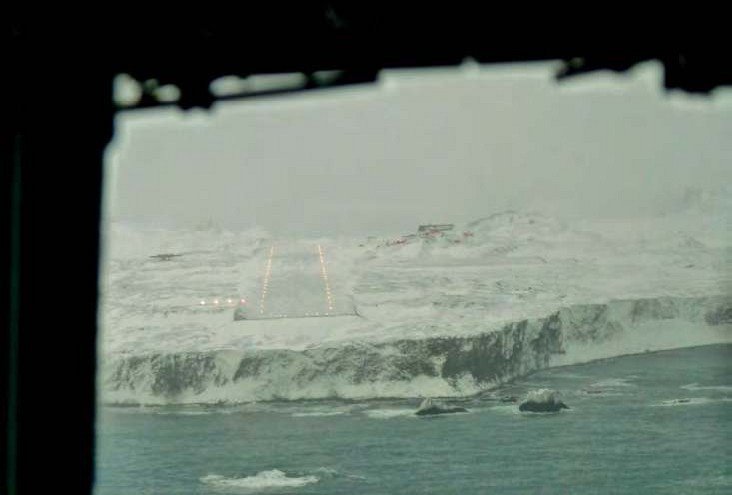 The final approach into the Chilean airfield Tte. Rodolfo Marsh in King George Island, viewed from a FAU C-130B. 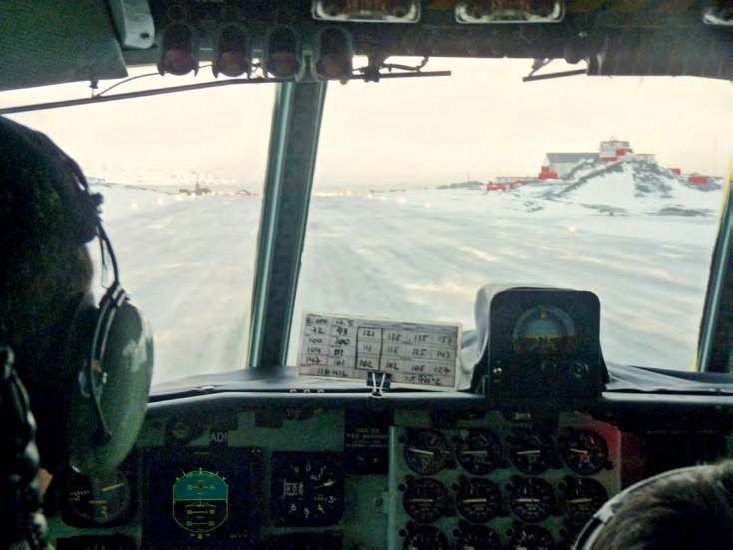 Landing run into the Chilean Tte. Marsh airfield in King George island. The base is located 2.15nm (4km) from the Uruguayan Artigas Base. 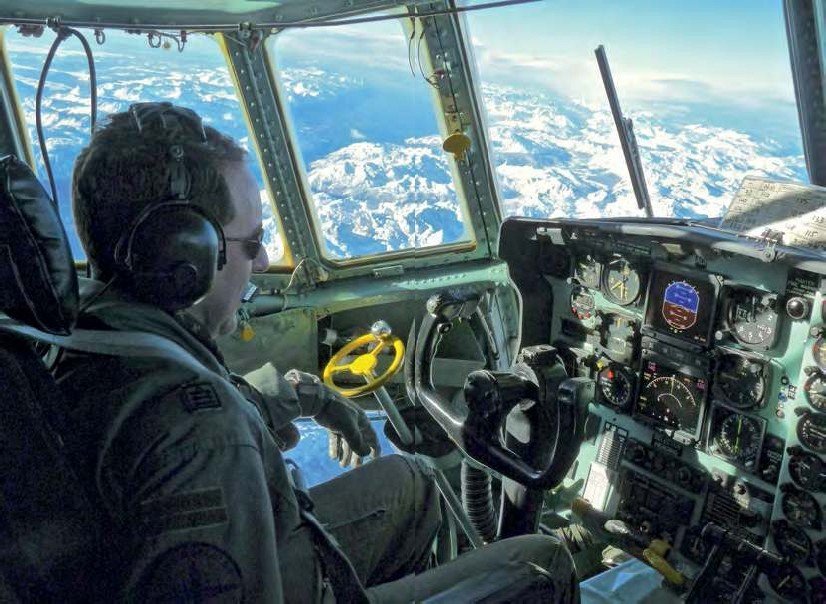 In the cruise, with a southerly heading, a FAU pilot finds a moment to relax on the way to the White Continent. 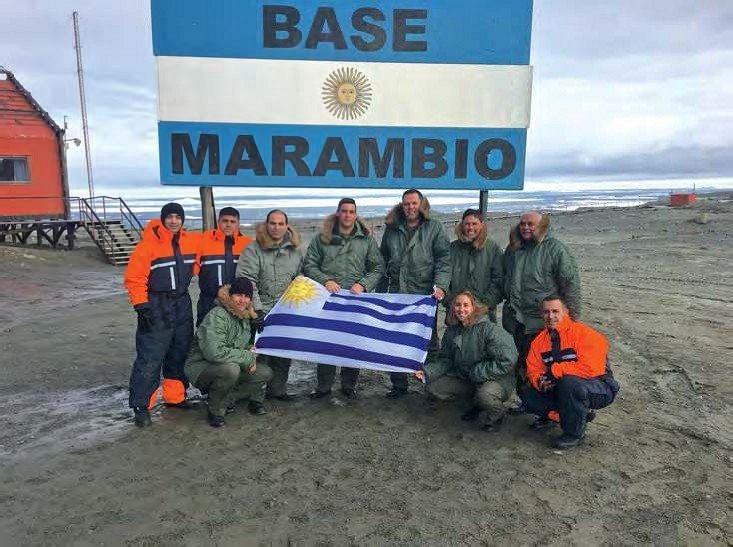 The FAU C-130B crew at the Argentine base Marambio for the first time, proudly displaying the Uruguayan flag. In the centre with his two hands on the colours is Lt Colonel Martin Campoamor, Commander of the Escuadrón Aéreo No. 3.

Operations on icy gravel runways put a great strain on the Hercules. Before each crossing to the White Continent, the meteorological conditions en route and at the destination must be carefully analysed. The crew assesses the probability of a successful emergency landing, Terminal Area Forecasts (TAF) and Meteorological Terminal Aviation Routine weather reports (METAR) and the SNOWTAM, (a special NOTAM, notice to airmen, notifying the presence, or removal, of hazardous conditions due to snow, ice, slush or standing water associated with snow, slush and ice on the movement area) are consulted. The condition of the runway, notionally split into three sections, is evaluated for coeicients of friction, braking eiciency, total snow deposits and depth on the runway and taxiways, before it is decided whether it is safe to fly the mission. The light from Rio Gallegos to Marambio and back took 3 hours 15 minutes each way (the Argentine base is deeper into Antarctica than the Chilean Teniente Rodolfo Marsh). The FAU crew was received at Marambio, by its Commander, a thankful Vice Commodore Gustavo Bruschini, and hosts and their visitors celebrated the historic occasion.

Dealing with the cold

The low temperatures on the ground during Antarctic operations dictate that aircraft engines are run for ten minutes every two hours to prevent damage to seals and gaskets in the fuel, oil and hydraulic systems, and to maintain viscosity of engine lubricating oil. This procedure was unnecessary in Marambio, as the temperature was between 0° and -5°C, and turnaround time was two-and-a-half hours. For the return light to Rio Gallegos, 30 Argentinian passengers boarded, including technicians and personnel who were repairing and checking generators, communication antennas and heating systems at the base.

Under a so-called Modernisation, Standardisation and Renewal Program for the Hercules leet that commenced in 2016, two upgrades were completed, on the KC-130H tanker aircraft TC-69 and C-130H TC-61. The rest of the leet is planned to follow them through the programme. Falklands veteran TC-69 was the first to go to Waco, 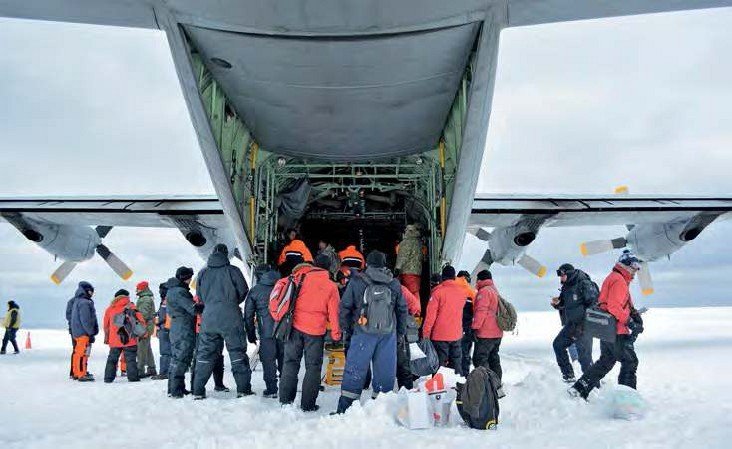 Argentine personnel at Marambio get ready for the flight back to the continent on FAU 591.

The £54 million contract with L3 was made through the United States’ FMS (Foreign Military Sales) Program. The LOA (Letter of Agreement) included the modernisation of TC-69 in addition to the delivery of five upgrade kits for the remaining aircraft, a flight simulator, documentation, manuals and training for personnel. The installation of the kits and the modification tasks will be carried by Córdoba-based FAdeA (Fábrica Argentina de Aviones [Argentine Aircraft Factory]) with the support of L3. The second modified aircraft, TC-61, was completed by FAdeA in June 2017 and delivered to Grupo I de Transporte Aéreo (Air Transport Group I), stationed at the I Brigada Aérea (1st Air Brigade) at El Palomar, Buenos Aires province.

The FAA’s TC-64, returned to flying duties from December 18, 2017 and started cargo flights immediately for the Argentine Antarctic campaign, completing three flights a week. Also participating on the resupplying efforts, were several ships of the Armada Argentina/ ARA (Argentine Navy) sailing from the mainland, among them the icebreaker ARA Alte Erizar (Q-5) with Sikorsky S-61 helicopters on board and the ARA Canal Beagle (B-3).

The two Uruguayan Hercules are due for deep maintenance; FAU 592 (c/n 282- 3596 and former US Air Force 60-0295), in service with Uruguay since August 18, 1992, has been out of service since May 2017 awaiting funds to pay for necessary work and 591 is due a Programmed Depot Maintenance (PDM), possibly, as on previous occasions, to be completed at Chile’s ENAER aircraft factory. Government approval has been granted for 591’s overhaul, and the work will include the fitting of a TCAS II (required for its regular UN missions), a new Garmin GPS GTN 650 and an as yet to be selected autopilot which will replace the old E4 model.

Both sides hope this cooperation between neighbouring nations, based on camaraderie, joint goals, respect and mutual admiration in such a remote and hostile corner of the earth, lasts forever.

FAU 591 taxying northbound on the Chilean Tte. Marsh runway, prior to a flight back to the main continent. Note the floating iceberg ahead, and the tower of the Trinidad Church at the 11 o’clock position.