The Flying Heritage and Combat Armor Museum (FHCAM) Messerschmitt Me 262A-1a/U3 was unveiled at Arlington, Washington in early May, repainted into the markings it wore when captured by US forces at Lechfeld, 13 miles south of Augsburg in Bavaria, during May 1945.

The Junkers Jumo 004B engines have been rebuilt by Aero Turbine in Stockton, California, and fi nal assembly of the airframe is now being completed by Morgan Aircraft at Arlington. Taxi trials of the Me 262, Werknummer 500453, were due to get under way during June/July, after which the machine will be transported to Moses Lake for a test fl ight, which is scheduled for the autumn, with Steve Hinton from Planes of Fame at the helm. It is thought that the pioneering jet fi ghter will be fl own just once before being retired to the FHCAM at Paine Field, where it will be displayed alongside Messerschmitt Me 163B-1a Werknummer 191660, a Fieseler Fi 103R Reichenberg (piloted V1) and a standard V1 ‘Doodlebug’.

Originally assembled at Obertraubling near Regensburg, south-east Germany during early March 1945, the 262 was soon moved by rail 125 miles south-west to Memmingen in Bavaria, where it made its fi rst fl ight on 14 March. Following testing it had the 30mm cannon-equipped fi ghter nose replaced with a photo-reconnaissance unit, housing two vertically mounted R6-50/30 cameras. After capture at Lechfeld — where the Luftwaffe had set up a Me 262 service test unit in April 1944 — the US Army’s 54th Air Disarmament Squadron carried out ‘de- Nazifi cation’ of the machine before it was roaded to Cherbourg for shipment to the USA on HMS Reaper to join Operation ‘Lusty’, the test programme led by Lt Col Harold Watson to evaluate advanced German aircraft designs. During testing with ‘Watson’s Whizzers’ at Wright and Patterson Fields, Ohio, the 262 made eight fl ights totalling four hours 40 minutes, but with two single-engine landings. During testing four engine changes were required. 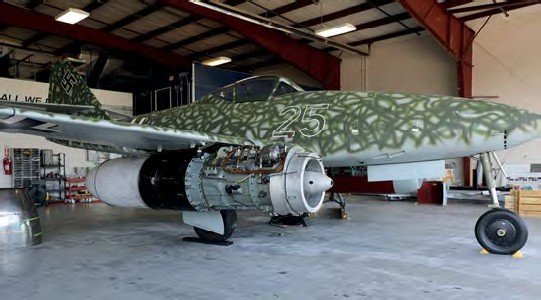 Messerschmitt Me 262A-1a/U3 Werknummer 500453 after being painted in its original markings at Arlington, Washington in late April. FHCAM

In 1955, the near-derelict airframe was acquired by Ed Maloney for his nascent Planes of Fame collection at Claremont, California. Two museum moves down the line, it spent many years on display at Planes of Fame’s Chino museum, displayed with code ‘White 9’, until being acquired by Microsoft co-founder Paul Allen for his Flying Heritage Collection in 2000. The collection was recently renamed the Flying Heritage and Combat Armor Museum.