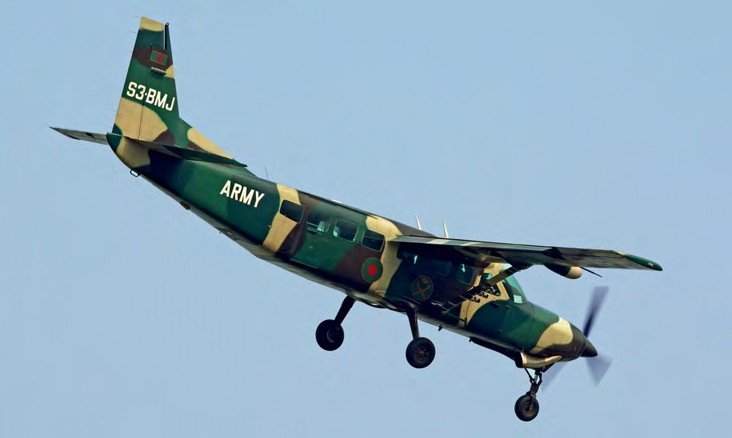 A number of Bangladeshi military aircraft carry quasicivilian registrations in the S3- range, some in addition to serials. This is the Army’s sole Cessna C208B Caravan, based at Tejgaon.

A country that is very familiar on the map of Asia and often in the news, yet only 47 years old in its present form, Bangladesh is fiercely proud of the independence it declared in 1971. Formerly East Pakistan, the new nation was born when the two parts of Pakistan went their separate ways after a bitter war, which drew in neighbouring India and embraced one of the most densely populated and floodprone lands on earth.

Every year on the day that marks the end of the nine-month war in 1971, December 16, Victory Day is celebrated with extensive parades of the various military forces at National Parade Square in the teeming capital, Dhaka, along with a series of other events. Of particular interest is the airborne component of the parade, which takes place at Tejgaon(Bashar) Air Base in central Dhaka, the former main airport for the city. The flypast is conducted with great ceremony in front of an invited audience of VIPs including Prime Minister Sheikh Hasina (daughter of Bangladesh’s first president) and military personnel. It includes comprehensive participation from all of the air arms of Bangladesh – Air Force, Navy, Army and Police, with most aircraft flown by officers of at least Squadron Leader rank. 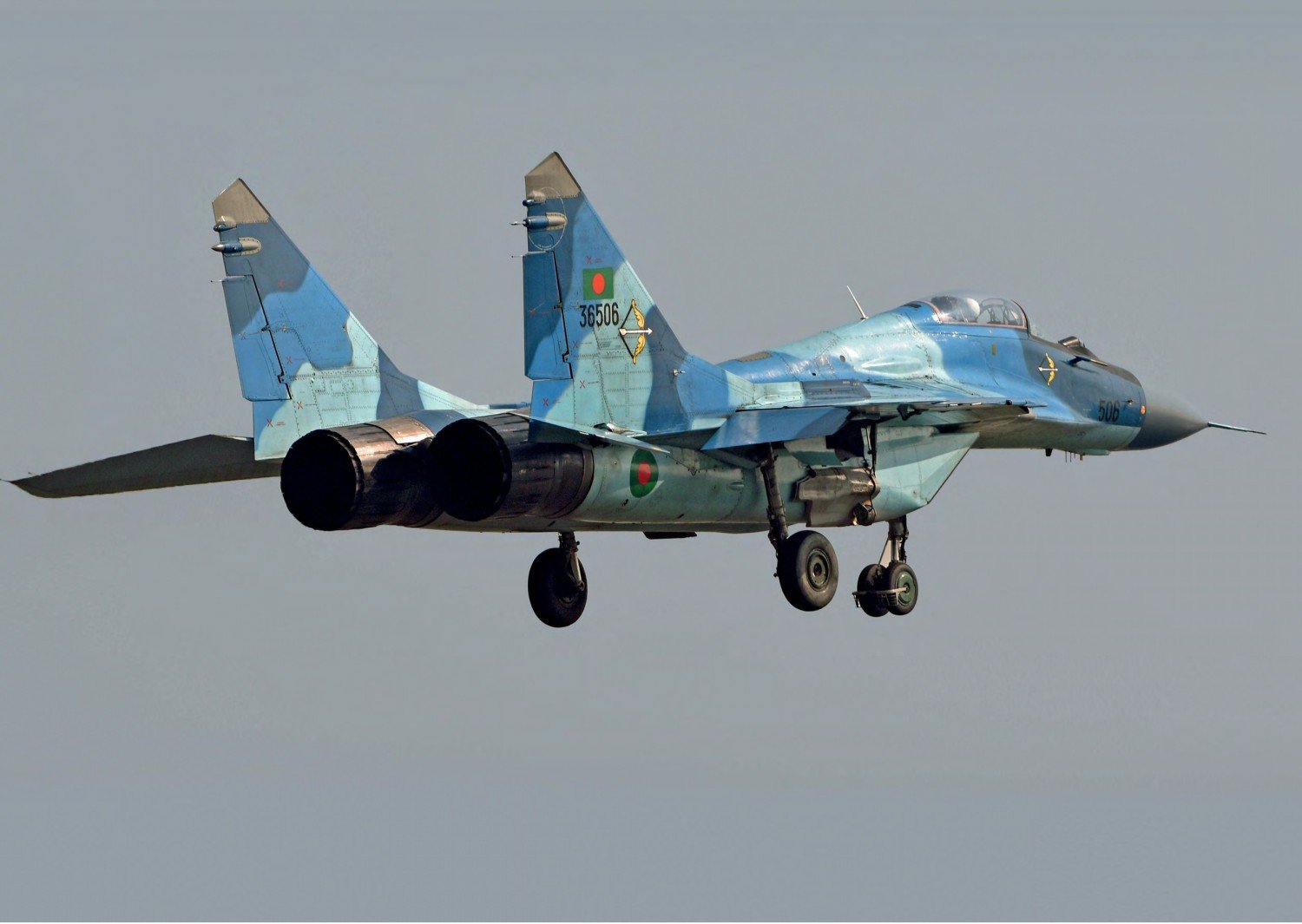 In 1998, Bangladesh ordered 24 MiG-29s, but due to payment problems only eight were delivered, spending a period of time grounded due to a lack of spare parts. They were put back in service with Indian help.
All photos Richard Vandervorn

Adding to the spectacle are the rehearsals that take place several times over the days leading up to the Victory Parade itself.

The sheer variety of aircraft represented is impressive, with all of the diverse types currently flown making an appearance. It is probably true to say that few, if any, other air forces worldwide are quite as colourful as those of Bangladesh. Each type is painted in a unique camouflage or quasi-civilian style livery. This year’s event and practices took place under consistently sunny skies, albeit with varying levels of smog and haze which are the norm for Dhaka at that time of year. With the exception of some Army helicopters flying direct from Tejgaon, nearly all of the aircraft are temporarily based and operate from Kurmitola Air Base, which is situated on the opposite side of the main runway at Dhaka’s Hazrat Shahjalal International Airport.

In order of appearance, the following types made up the 2017 Flypast: 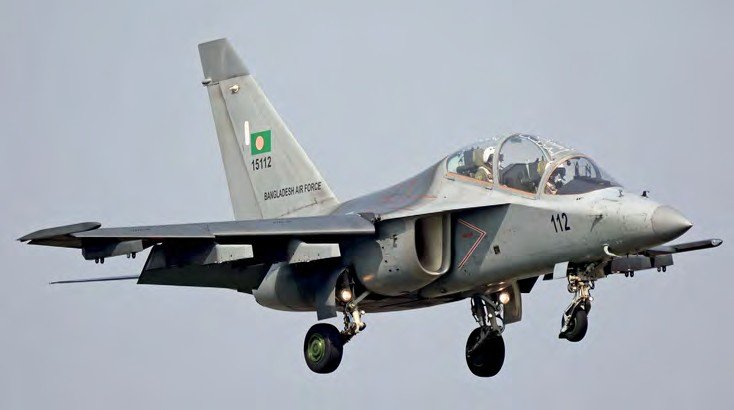 Of the 16 Yakovlev Yak-130 fightertrainers delivered by Russia in 2015, three have already been written off in accidents.

Two AW139s were acquired from AugustaWestland in 2015 for maritime patrol and SAR duties.

In order to set the cross-section of military air power seen in the flypast into context, it is worth taking a look at the make-up of the modern Biman Bahani (Bangladesh Air Force or BAF).

After formation in 1973, initial equipment comprised two Wessex helicopters from the UK and 12 MiG-21s from Russia, along with a number of An-24 and An-26 transports and Mi-8 helicopters. In 1977, China started to become the predominant supplier when the first licence-built MiGs began to join the BAF. France contributed a number of CM170 Magisters in the 1980s while twelve T-37s from the United States followed in the 1990s.

Large numbers of refurbished F-6s (MiG-19s) came from Pakistan. All of these aircraft have now been retired; many of the F-6s never saw service in Bangladesh having been destroyed in the devastating 1991 floods, some before they had even been uncrated. The first Chinese MiG-21 copies in the form of 25 Chengdu F(T)-7MBs arrived in 1989.

The Bangladesh Air Force currently operates from four major bases, three of which are named after national heroes.

Bashar Air Base at Dhaka

Consists of two bases, Kurmitola (the main fighter base, sharing the runway with the present Dhaka airport) and Tejgaon housing transport and helicopter units, on the site of the old airport.

Zahurul Haque Air Base at Chittagong

Matiur Rahman Air Base at Jessore

Home of the Air Force Academy and a Flying Training Wing.

PT-6s assigned to the Air Force Academy moved to Bogra in 2006 for the flight instructor school.

In addition, Paharkanchanpur is an Air Force heliport and Cox’s Bazar Airport is used as a forward landing ground, particularly important during the current Rohingya refugee crisis.

Shape of the future

Forces Goal 2030 is a development plan established at the beginning of the decade to make the Bangladesh Air Force a technologically advanced, well-trained and potent service that can deter any threat.

These, ambitious plans are intended to strengthen the nation’s airpower and air defence capabilities. Initially the Lockheed Martin F-16, SAAB JAS 39 Gripen, RSK MiG-29CMT and Sukhoi Su-30 were allunder consideration as candidates for a new fighter. More recently new Chinese equipment was favoured, but the focus has now swung back to the highly advanced Sukhoi Su-30. 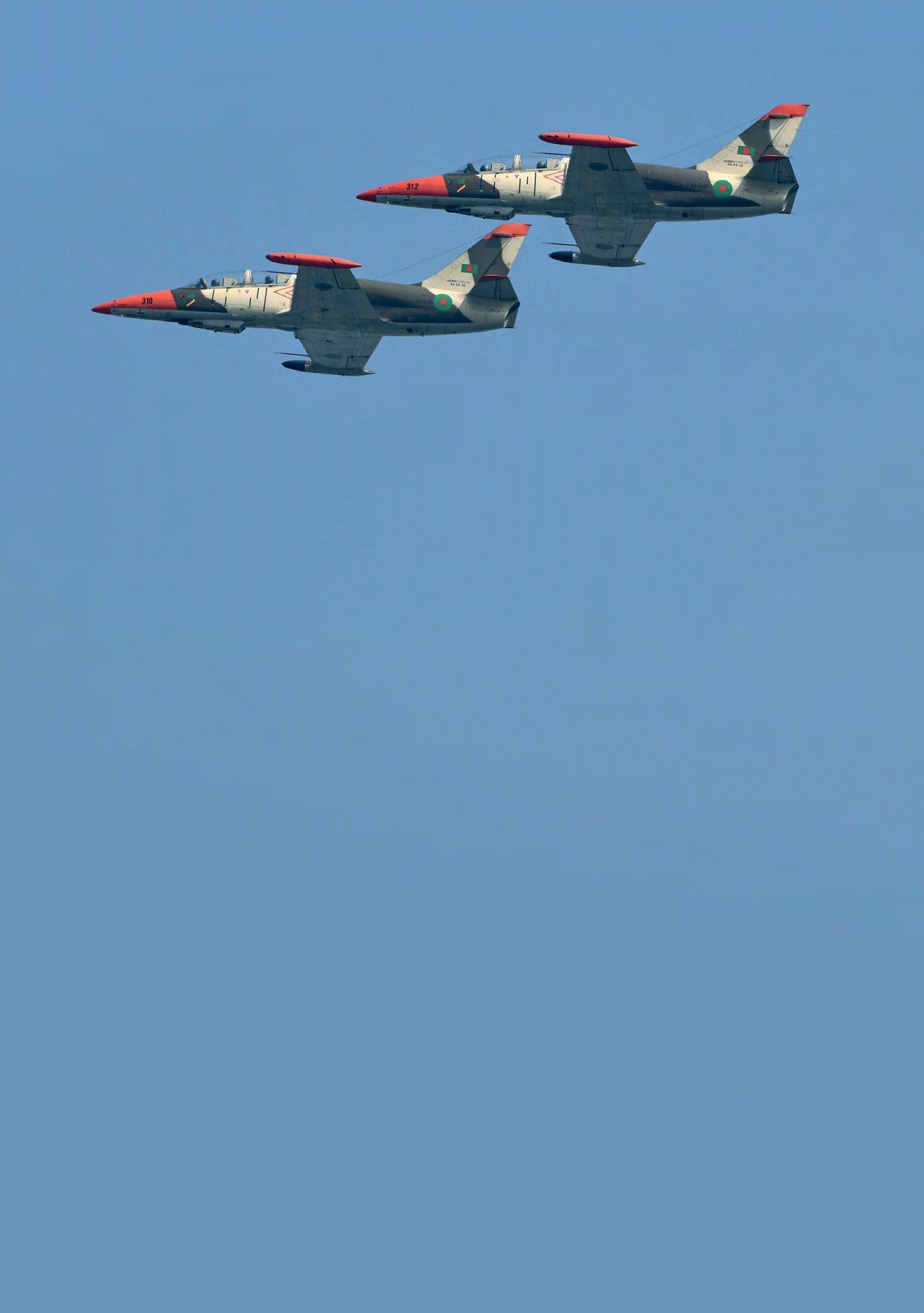 Two of the seven L-39ZAs take-off for the final practice before the Victory flypast.

The Bangladesh Army’s three Cessna 152s based at Tejgaon were fitted with smoke streamers on the wing struts for the flypast. 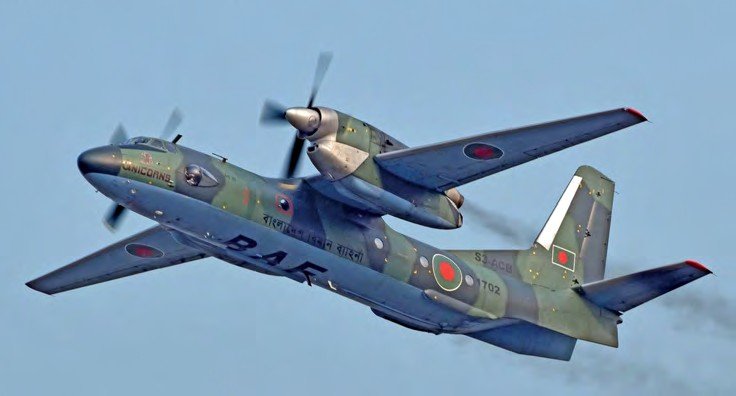 After a 6,000km flight, this An-32 underwent a major overhaul by Factory 410 at Kiev-Zhuliany, Ukraine in September 2017 including an avionics upgrade. The remaining two An-32s will follow.

The Bangladesh Navy took delivery of a pair of Dornier Do228-212NGs in 2013. Two more were recently ordered for security and SAR duties.

F-7BG F937 is operated by 5 Squadron in a blue and grey colour scheme, reminiscent of the two-tone blue that has now been replaced by grey.

In the meantime, since the inception of the development plan, acquisitions have included a further squadron of Chengdu F(T)-7 Airguards, 16 Mi-171Sh transport-attack helicopters, a VIP Mi-171E, two AW139s for maritime SAR operations, 16 Yak-130 fightertrainers, nine K-8W Karakoum jet trainers and three Let 410UVPs transport-trainers. In 2016, 16 new PT-6 basic trainers were ordered from China to replace the fleet of older PT-6s, but eventually the far more modern Yak-152 should supplant these.

A tender was issued for the procurement of eight multirole combat aircraft in early 2017, and an AEW capability. Countering a $500m loan by India to buy Russian aircraft, China has proposed a $1 billion deal to supply 16 Chengdu J-10 multirole aircraft, seven more K-8s, a Xian Y-20 heavy lift transporter and a Shaanxi KJ-200 AEW&C: variation of the old Y-8/ An-12 design. In May 2017, a contract was awarded to Russia for eight Su-30SMEs with four to follow, configured for the strike and maritime role. Doubt has since been cast as funds may instead be needed to bolster Army aerial capabilities to deal with aggression on the troubled eastern border with Myanmar, where the Rohingya refugee crisis is worsening an already tense relationship.

In mid-2017, the Bangladesh government announced that two former RAF C-130Js would be supplied by the UK to supplement the existing quartet of C-130Bs delivered from the United States in 2000 after storage with the Aerospace Maintenance and Regeneration Center at Davis-Monthan Air Force Base, Arizona.

While the outcome of the Forces Goal 2030 development plan will depend greatly upon the political decision as to which donor power should be favoured, the military of Bangladesh are poised to emerge as a modern and capable Asian force.