Many would assume the ‘V’ in V-speeds is derived from ‘velocity’ but the term is actually from the French word ‘vitesse’ French for ‘speed’. From light trainers to complex multi-engine types, knowing your V-speeds is crucial for operating an aircraft within its optimum performance envelope and structural limits. There are countless V-speeds, particularly when it comes to transport-category aircraft, so we will focus on the important ones one should know when flying general aviation aircraft. 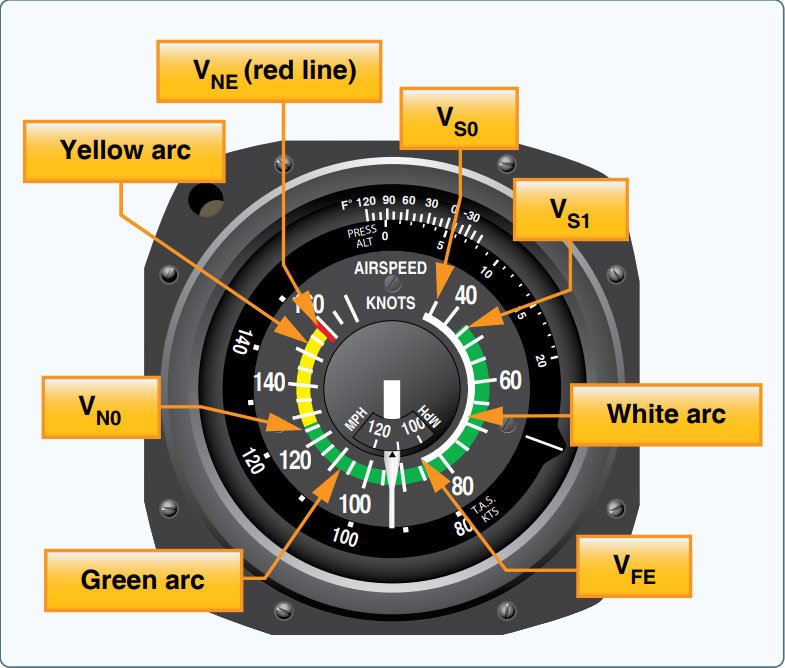 On most light aircraft, safety-critical speeds are marked as colour-coded arcs on the airspeed indicator (ASI). At the top end of the scale, they define the structural limits of the airframe while the lower end marks the stall speeds. Finally, we have performance-related V-speeds. These are usually not marked on the ASI, so we have to commit them to memory. One important factor we should take into consideration is that V-speeds are measured at sea level in standard International Standard Atmospheric (ISA) conditions at maximum take-off weight. They vary depending on aircraft mass, configuration and atmospheric conditions. At lighter loads, V-speeds are generally slightly lower.

The yellow arc is the caution range and this is where the aircraft may be flown in smooth air only. Abrupt control inputs should be avoided in this region. At the top of the yellow arc we will find the Never Exceed Speed (Vne). It is the speed that we should never intentionally fly beyond as it is likely to result in control surface flutter and will eventually compromise the structural integrity of the airframe.

The flap operating range is marked by a white arc on the ASI. The top end denotes the maximum flap extension speed (Vfe) and this is the safe limit at which we can extend full flaps. Above this speed, deploying full flaps can result in jamming the flap mechanism or even worse, asymmetric lift. The stall speed with the flaps fully extended (Vso) is at the bottom of the white arc.

We should all know Vr or the rotation speed where we apply back pressure on the controls to become airborne. For large aircraft, Vr varies depending on weight but in most light aircraft it is usually fixed and we can pick it up from the Pilot Operating Handbook (POH). For the climb-out, there are two additional speeds we should know. The best angle of climb (Vx) gives us the greatest altitude gain over the shortest distance travelled. So if there are obstacles on the departure path, we should climb out on Vx until we have cleared the terrain and then accelerate to Vy or the best rate of climb speed. This provides the most altitude gain in the shortest time. On a normal take-off, we use Vy as our climbout speed to get to a safe altitude. Note, these speeds are not marked on the ASI so we have to commit them to memory. 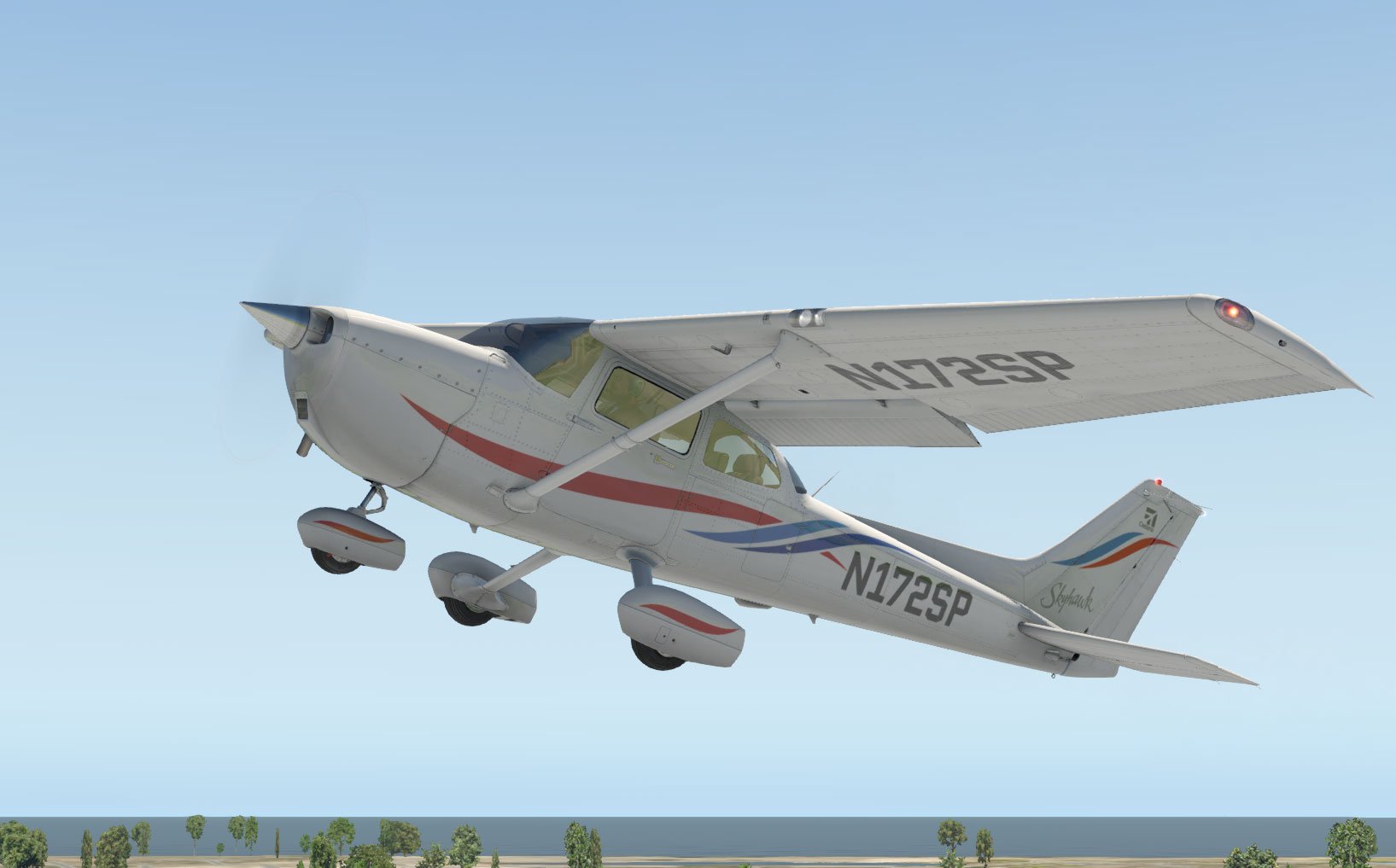 Vy provides the best rate of climb, while Vx gives us the most altitude for the shortest distance travelled.

The design manoeuvring speed (Va) is where we can apply full control deflection without the risk of exceeding the structural limits of the airframe. The wings will actually stall before overstressing the aircraft. The published Va speed is calculated at maximum gross weight. At lighter loads, it actually decreases and some aircraft manuals give different Va speeds for various weights. For example, the C182 has a Va of 111kts at 2,950lb and 89kts at 1,950lb. If you are flying through strong turbulence, you should stay below Va.

If you are having a bad day and have an engine failure, the best glide speed (Vg) suddenly becomes very important. This is where the wing produces maximum lift for minimum drag or the optimum lift to drag ratio. Vg gives us the greatest glide range and maximises the time to find a safe area to make a forced landing. If we are trying to reach a landing spot at the edge of our glide limit, it may be tempting to raise the nose, but this will only increase drag and decrease the range.

Crossing the threshold at the correct Vref speed is important as coming in ‘hot’ can significantly increase the landing distance.

Vref is the reference speed for crossing the runway threshold at 50ft. It is obtained from the stall speed with landing flaps or 1.3 x Vso. Most SOPs (Standard Operating Procedures) stipulate adding a 5kts buffer and a wind correction factor (half the wind gust). For example, in an aircraft with a Vso of 50kts, we would aim to cross the threshold at 70kts (1.3 x 50 + 5). If the wind is gusting 10kts, we would add half the gust factor, which would bump Vref up to 75kts. Always aim to cross the threshold at the right speed to avoid increasing the landing roll. For example, crossing the threshold just 10% over Vref can increase the ground run by as much as 20%.

Aircraft with retractable undercarriages have two gear limiting speeds. Vle is the maximum speed with the landing gear down and locked and Vlo is the gear operating limit. This is the maximum speed at which the landing gear can be in transition and is limited by factors such as hydraulic pressure, aerodynamic loads on the gear doors or linkages which are out of place when the undercarriage is in transition. When the gear is down and locked, the linkages are stronger and able to withstand higher loads. Vlo and Vle are usually the same but on some aircraft, they can be different. For example, on certain models of the Piper PA-31 Chieftain, Vle is 156kts but Vlo is 130kts. These speeds are also not marked on the ASI and must be committed to memory.

Twin-engine aircraft introduce additional V-speeds which are related to single-engine operations. The loss of an engine obviously results in a 50% reduction of available power but that’s not all. Climb performance is also decreased by as much as 85%, caused by asymmetric thrust yawing the aircraft towards the dead engine. To compensate, you should apply opposite rudder and a 5° bank into the good engine, which results in a sideslip. So, losing an engine not only reduces the available power but also introduces additional aerodynamic drag. In fact, on lower power piston twins, performance can be so reduced that at high weights, it is not possible to maintain a positive rate of climb. 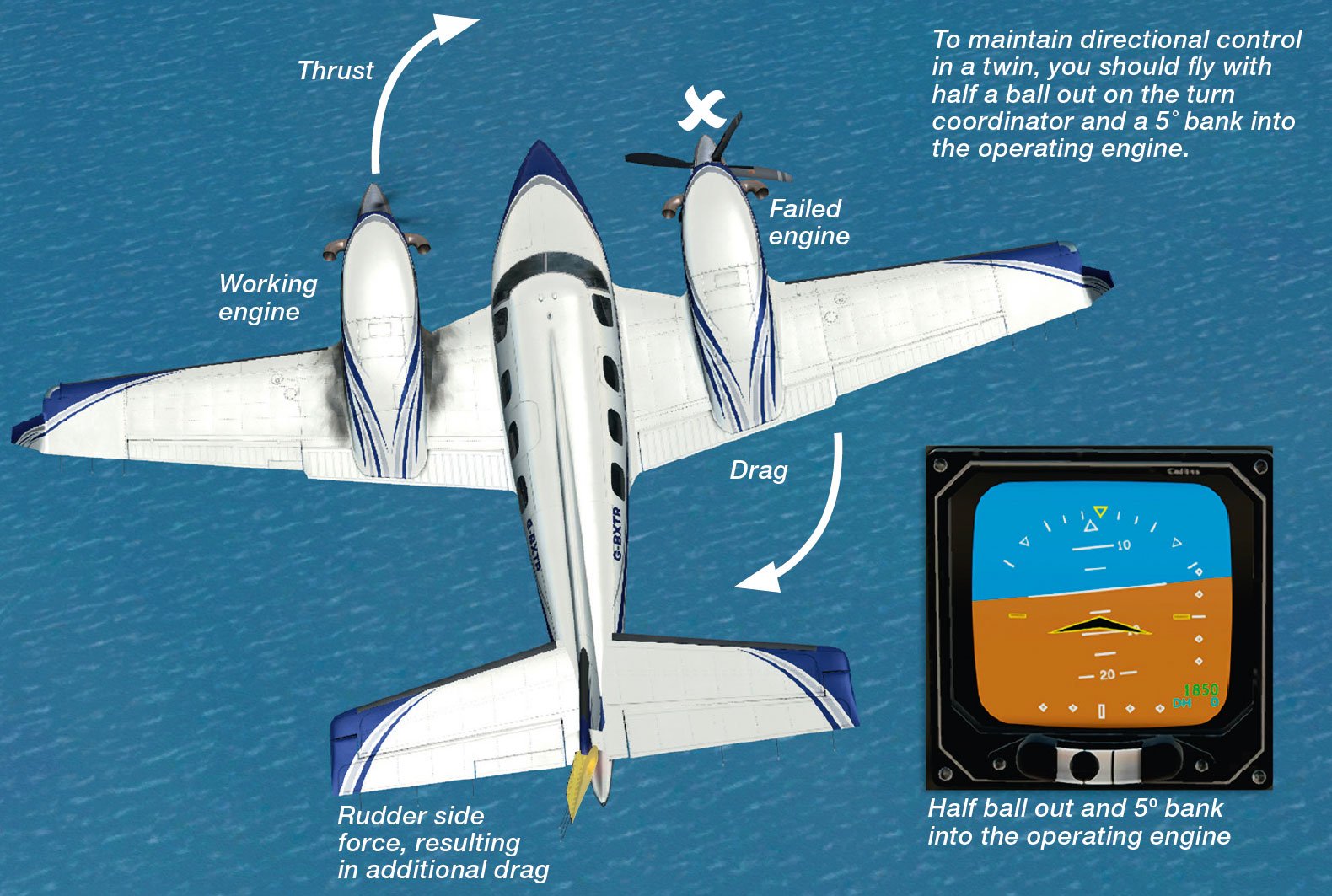 To maintain directional control in a twin, you should fly with half a ball out on the turn coordinator and a 5° bank into the operating engine.

This brings us to two critical speeds. First, we have the minimum controllable speed (Vmc), marked as a red line on the airspeed indicator. Vmc is the minimum speed where we can maintain directional control with the critical engine failed. The dead engine should be feathered and the other at maximum power. Extreme caution should be exercised near Vmc as it is close to the stall speed (Vs). Stalling and losing directional control at the same time has resulted in many unrecoverable spins during single-engine training exercises.

The critical engine is the one whose failure most adversely affects the performance and handling abilities on twins. On aircraft where both propellers rotate clockwise, the left engine is critical as it generates the greatest yaw moment. Some twins have counter-rotating props so neither engine is critical and the failure of either one will produce the same detrimental effects. 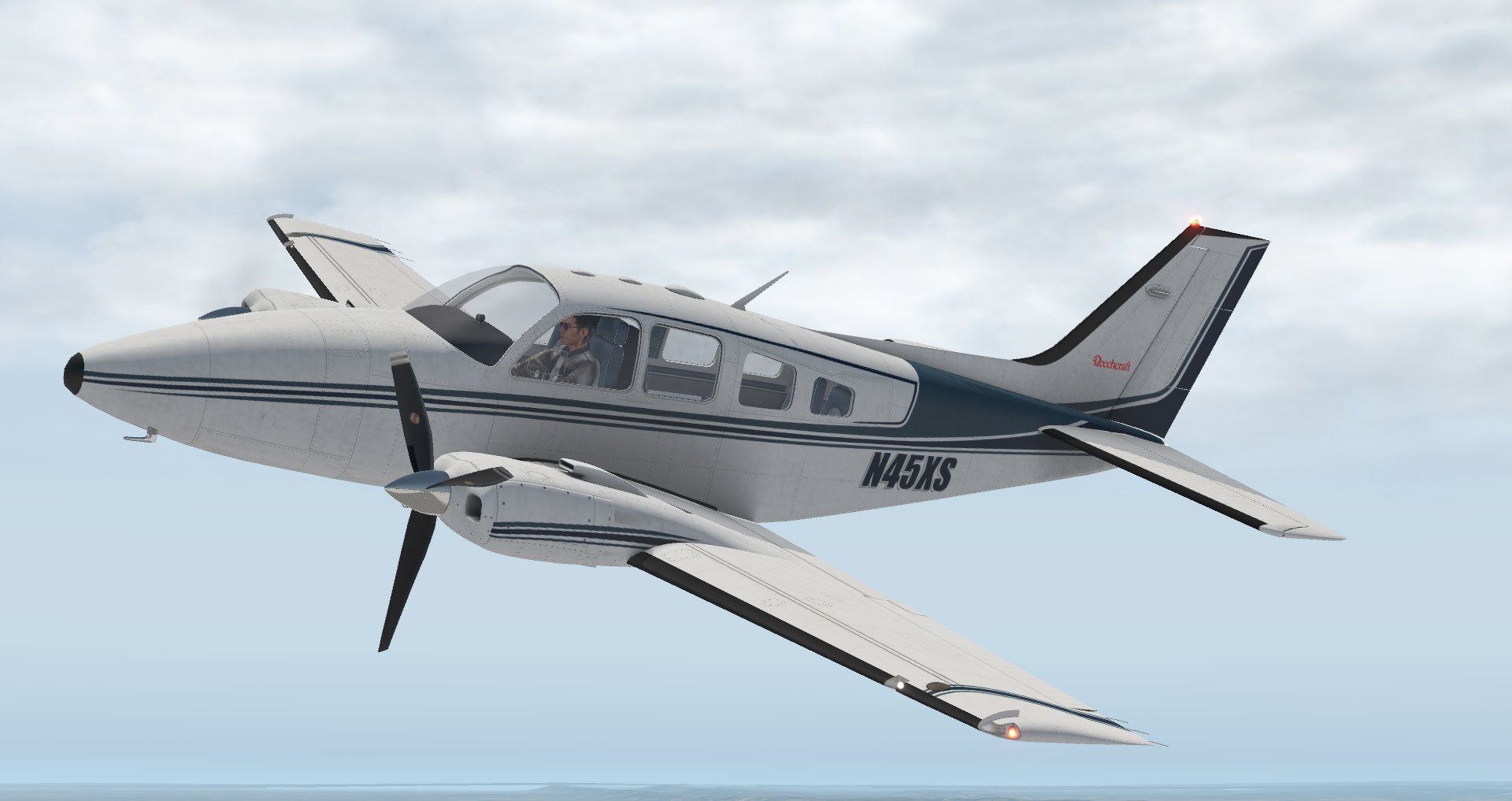 An engine failure in a twin can result in an 85% decrease in climb performance.

The second V-speed every twin-engine pilot should know about is the best single-engine climb (Vyse), marked by a blue line on the airspeed indicator.

Although it is common to fly close to Vmc during single-engine training exercises, under normal conditions, you should never deviate below Vyse. On take-off and after the gear is retracted, you should accelerate to Vyse in a gradual climb. Once you have accelerated past the blue line speed, you can resume normal climb. In twins, climb speeds are a balance between rate of climb and having enough airflow through the engines to keep them cool. Similarly on approach, never go below the blue line until you are committed to land and sure to make the runway. When landing on a short strip, it is tempting to drop below blue line speed. But if the worst should happen and you lose an engine, the aircraft will be in a high-drag configuration and the speed could ultimately decay below Vmc, particularly if the flaps and gear are down. 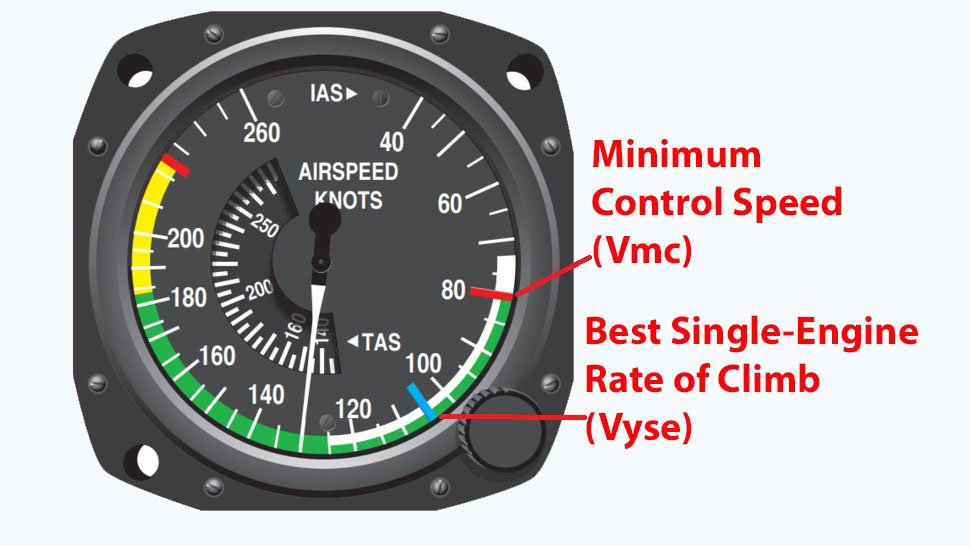 Every twin-engine pilot should know the minimum control speed (Vmc) and the best single-engine rate of climb (Vyse).

In piston twins at maximum weight with one engine out, you are unlikely to maintain altitude even at Vyse and you will see an inevitable descent to the ground. The mark of a good twin pilot is trading off speed while always ensuring the runway is within reach. The good news is that when you migrate to turbines, you have much more reserve power and single-engine performance is significantly better.

In the real world, knowing and respecting the V-speeds is crucial if you want to stay alive. In the virtual world, we are more fortunate as we don’t suffer the terminal consequences of a structural failure caused by overstressing the airframe. However, flying by the numbers is not only good airmanship but will also make you a better pilot and ultimately result in a more realistic simulator experience.