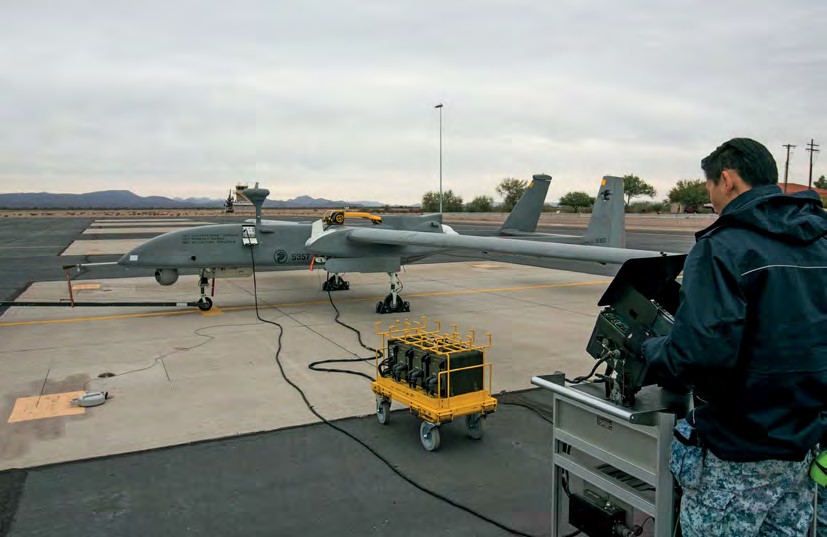 FOR TWO weeks in December, the Republic of Singapore Air Force’s four permanent detachments in the United States and other units from Singapore gathered at Luke Air Force Base, Arizona for Exercise Forging Sabre, the country’s most complex training event.

Forging Sabre is a proof of concept wargame staged to test various integration concepts, doctrines and technologies using aircraft, helicopters, and UAVs in operation with the Republic of Singapore Air Force and Army. With the exception of 2007, the exercise has been staged every other year since 2005.

Live munitions and large force employment training is virtually impossible to conduct in Singapore because it’s a tiny island state, home to one of the busiest commercial airports and associated airspaces, and void of the geographical features required for realistic air-land integration.

Situated south of Luke, the Barry M Goldwater Range is America’s third largest training and bombing range. Covering 1.7 million acres, the range is over 20 times the size of Singapore itself, thus giving the RSAF unrestricted airspace and landmass within which to conduct complex live firing of precision-guided munitions.

In previous iterations of Forging Sabre, the RSAF used only the East TAC, which is about 98,842 acres in size. In the latest edition, planners used the North and South TACs, opening up operational areas covering 271,815 acres to increase the number of Red Force targets and the threat laydown’s level of complexity for the Blue Force.

Forging Sabre battle decisions are deliberated and made in the integrated command post at Luke, and although the operating area was expanded twofold, the RSAF ensured its aircraft and footprint was not increased by the same factor, but rather used data and intelligence to make decisions.

For the 2017 edition, Army staffers joined their Air Force colleagues in the command post where the number of Singaporean personnel increased from 98 (the number assigned in 2015) to 120.

The complexity of the entire exercise and its various scenarios was increased, and involved more moving targets (vehicles) and shelters for the vehicles to hide. Consequently, the task of hunting, identifying and designating targets for the strike aircraft undertaken by the Heron 1 detachment was much more challenging. 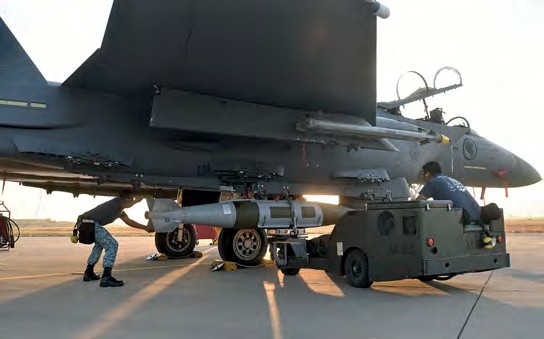 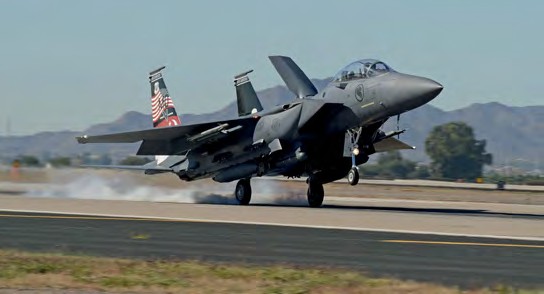 An F-15SG lands at Luke Air Force Base. Republic of Singapore Air Force

The RSAF demonstrated its ability to engage vehicle convoys, and hit most of the targets with GBU-54 laser-guided Joint Direct Attack Munitions (LJDAM) dropped by F-15SGs.

The JDAM is a preferred precision-guided weapon used against moving targets, with wider delivery parameters, greater manoeuvrability and flexibility. Currently, the F-15SG is the only RSAF aircraft able to employ JDAM weapons. The first upgraded RSAF Block 52 F-16 will gain JDAM capability this year.

Also making its debut at Forging Sabre 2017 was the 2,000lb (907kg) GBU-31 JDAM, primarily used for reinforced structures and large complexes, which was certified on the RSAF F-15SG in May 2017. Eight GBU-31s were released during the exercise.

The Republic of Singapore Ministry of Defence (MINDEF) believes the RSAF, when using the GBU-31, will be able to destroy more targets in a single strike wave and overpower an enemy faster. 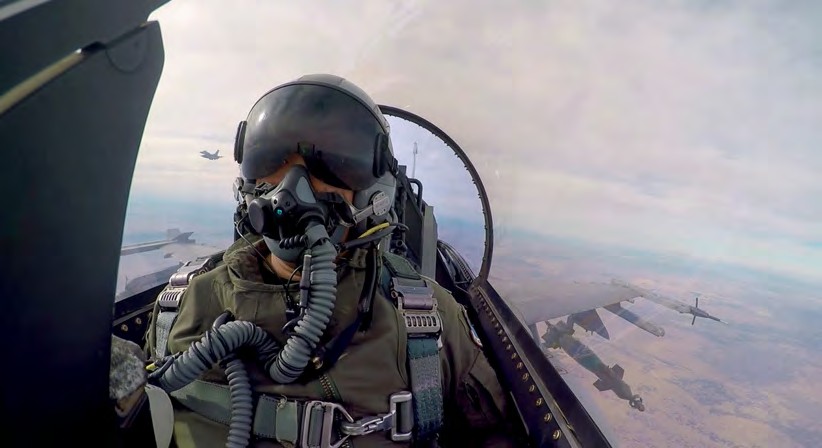 Singapore first used the Heron 1 UAV in the 2015 edition of Forging Sabre during which the systems demonstrated promising results and potential for use in an integrated exercise. TAMAN’s Multi-mission Optronic Stabilized Payload (MOSP) generates a high resolution, colour video feed over the target area with better depth of field, giving image analysts the ability to discern targets and analyze potential target shelters. In 2015, the Heron 1 was able to cooperatively lase moving ground targets to enable a small group of F-15SGs to complete a strike in a single pass.

With endurance of around 45 hours, the Heron 1 is able to stay aloft for extended periods without the need to recover and change out the electro-optical sensors, and as a result, give the Red Force a window of opportunity to move.

Captain Ronald Lim, a Heron 1 pilot assigned to 119 Squadron said: “With two air vehicles airborne, each focusing on a tactical area, we have two simultaneous video feeds for the commanders to see what is happening on the ground, enabling them to make faster and sharper decisions. We also have more manpower [this time] for day and night operations.

“With interactions and feedbacks from the pilots and commanders, we can pre-empt the strike, so if we know the Apaches and fighters are coming in a certain direction, we position ourselves such that we capture the strike for the commander to assess the results of the attack, and at the same time be at certain profile for an accurate lasing.”

During the latest edition, the RSAF explored greater use of the Heron 1’s capabilities and more laser techniques. In one mission, the Heron 1 laser designated a target for the AH-64D, allowing the attack helicopter to engage the target at the last moment with a radar-guided AGM-114L Hellfire missile, cancelling the need for the helicopter to scout for the target.

December’s exercise was also one of the first times the Heron 1 UAVs worked with the Army’s M142 High Mobility Artillery Rocket System (HIMARS) in a live fire scenario. Captain Lim said: “Being able to see them striking targets on the ground gives us better understanding on how their artillery systems work, how the munitions land. It lets us understand how we can support the land commanders by giving them the appropriate video imagery.”

A highlight for Singapore’s MINDEF was participation by six M142 HIMARS from the 23rd Singapore Artillery Battalion; each HIMARS can fire up to six M31 unitary rockets, with a range up to 70km (43.5 miles), giving the Blue Force additional standoff capabilities.

Inclusion of the HIMARS system provided exercise commanders an additional option to strike targets and better assign aircraft to other targets, since the M31 rockets are GPS-guided and are effective against static targets.

Exercise Air Director, Colonel Liew Boon Ping said: “The HIMARS can take out a command post while the fighters can be reassigned to pursue a convoy detected by the Heron 1. We were very sequential, when fire missions were linear.

“With multiple moving targets and zones, it is not something a single shooter nor service can manage. That’s a situation where land forces would be better situated to command air strikes and vice versa. In areas where the RSAF has committed assets for a coordinated strike, it might not have enough munitions to service additional land targets, that’s when a HIMARS battery can fire at RSAF’s control.”

Liew added that the RSAF had plotted the HIMAR’s possible rocket trajectory into the command and control system, and with live tracking of asset movements, allowed the RSAF to carry out near concurrent engagement. 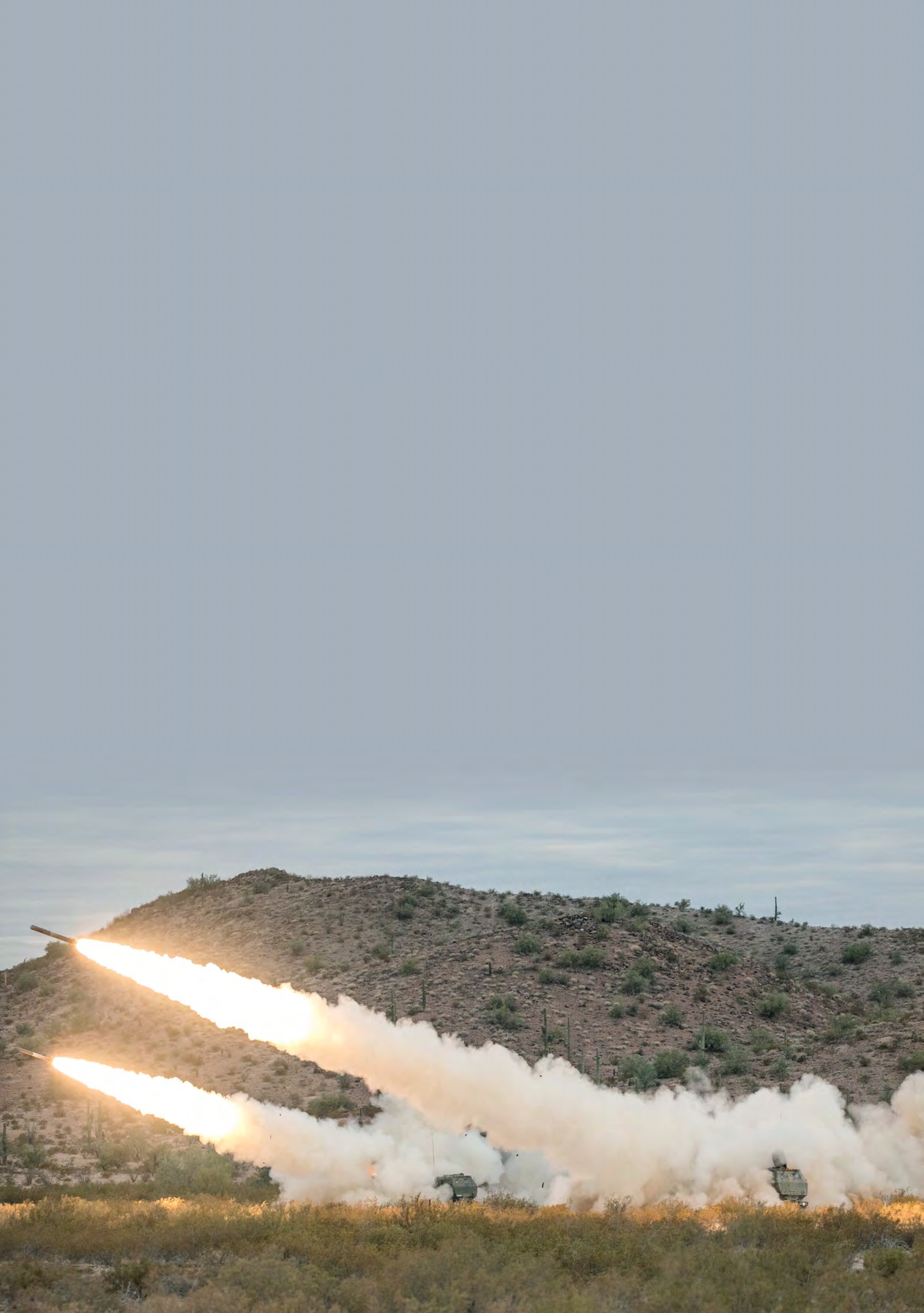