The Belgian Air Component announced on February 3 it would end its 13-year training partnership with the Armée de l’Air at BA120 Cazaux by late 2018, and its fleet of Alpha Jet 1B+ aircraft would be withdrawn from service shortly after. 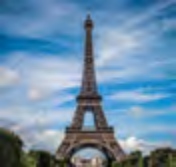 An Alpha Jet B1+ assigned to AJETS 2/8 landing at BA120 Cazaux. All photos Jan Kraak

From 2019 onwards, Belgian trainee pilots will follow the Euro-NATO Joint Jet Pilot Training Program (ENJJPT) at Sheppard Air Force Base, Texas. Since 2004, the majority of Belgian pilots have been trained in France. Initially, Belgian pilots started their training in France at the Ecole de l’Aviation de Chasse 0/314 at BA705 Tours for basic jet training and then move, depending on which stream they are selected for, to either BA702 Avord for advanced transport aircraft training or BA120 Cazaux for advanced jet training. Basic jet training was moved to BA120 in 2013.

Withdrawal of the Belgian Alpha Jets might seem a straightforward operation. However, no less than 25% of the ETO’s officers are foreign, the majority of whom are from the Belgian Air Component who work in the different divisions of the ETO, such as the Centre Instruction Sol responsible for the simulators. Two simulators, one Alpha Jet 1B+ and one Alpha Jet E+, are operated on base, so there will be an extensive restructuring of personnel once the Belgians leave Cazaux.

This poses a question: will the Armée de l’Air have enough capacity with its fleet of upgraded Alpha Jets?

Moving the Belgian fleet to Cazaux was beneficial for the Armée de l’Air, because it allowed French instructors and student pilots to fly much-needed hours using Belgian Alpha Jets: the Air Component had a considerable overcapacity due to decreased student numbers. In recent years, the Ecole de Transition Opérationnelle flew around 6,500 hours a year with 16 Belgian and 16 French Alpha Jets on strength. The school graduated approximately 50 pilots annually, approximately 16 of whom were Belgian. Furthermore, since late 2013, the Armée de l’Air has trained Weapon System Officers on the Alpha Jet at Cazaux in order to decrease attrition rates of junior WSOs in the frontline squadrons. It seems possible the loss of half the Alpha Jet fleet could mean the Armée de l’Air will not have sufficient hours available for its own training modules.

Consequently, there is a good chance the Armée de l’Air will have to find additional flying hours once the Belgians have left France, but this is easier said than done. The Armée de l’Air only has approximately 20 upgraded Alpha Jet E+ aircraft on strength, and the Alpha Jet E’s assigned to the Ecole de l’Aviation de Chasse at Tours would normally not be an option. Alpha Jet Es assigned to Tours did not receive the same upgrades as the aircraft assigned to Cazaux and thus lack important pedagogical tools, such as an inertial navigation system or a head-up display (HUD) in the front cockpit and a HUD-repeater in the aft cockpit for the instructor. This is one of the reasons why the Alpha Jets assigned to the Ecole de l’Aviation de Chasse are scheduled to be phased out over the next two years. 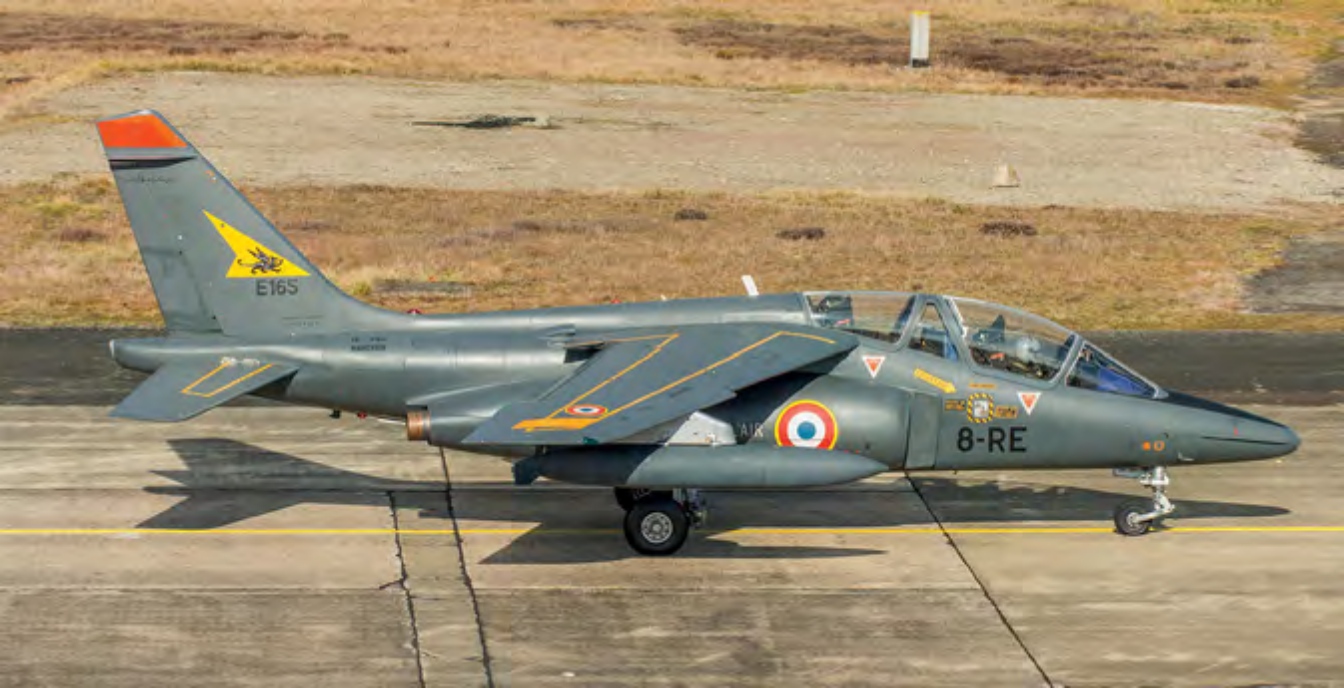 After the Belgian Air Component Alpha Jets leave Cazaux in 2018, the aggressors of Escadron d’Entraînement 3/8 ‘Côte d’Or’ will be one of two Alpha Jet squadrons remaining in Armée de l’Air service.

Between January 23 and February 3, Exercise Athena, an air force and army Special Forces event, and Exercise VOLFA 2017-1, focused on first-entry combat scenarios, took place at BA118 Mont-de-Marsan. Over 200 airmen and a variety of aircraft ranging from Rafales and Mirage 2000Ds to tactical transport planes and Caracal helicopters deployed to the base in south-west France. For the first time, an operational A400M took part in Exercise VOLFA. The Armée de l’Air’s fleet of tactically capable A400Ms assigned to ET 01/061 based at BA123 Orléans is slowly but surely growing in numbers, which means crews can now start training in tactical flying during complex composite air operations. Unfortunately, A400M 0037/F-RBAJ (msn 037) experienced a triple bird hit during its mission on February 1 and was seen by the author on the Mont-de-Marsan flight line undergoing inspection.

All three exercises were combined on several occasions and Danish F-16s flew to Mont-de-Marsan to debrief their VOLFA missions while a Luftwaffe Transall C-160D, temporarily based at BA118, took part in both Athena and VOLFA.

Forces assigned to Operation Chammal remained busy in January, with an average of 35 to 45 sorties a week. Three Rafales took offfrom their base in Jordan on January 16, each carrying a 2,000lb (909kg) GBU-24 Paveway III, to destroy a command centre in Mosul, Iraq.

According to Le Journal de l’Aviation dated February 1, the two remaining Armée de l’Air EC725 Caracals assigned to Escadron d’Hélicoptères 1/67 (EH 1/67) returned home to BA120 Cazaux from service in support of Opération Barkhane at the end of December. The squadron had deployed between two and four Caracals to N’Djamena in Chad since July 2014, and from there they regularly deployed across the region in support of Opération Barkhane.

A rare indication of probable armed reconnaissance missions over Libya took place on January 16 when a C-135FR, accompanied by two Rafales from Montde- Marsan, made an emergency landing at Malta airport. The Rafales were each carrying a RECO NG reconnaissance pod with two live MICA EM and two live MICA IR air-to-air missiles. The Rafales were able to fly back to France after refuelling, but the C-135FR had to remain in Malta awaiting spare parts and repairs.

According to French specialised press, the first Rafale for the Qatar Emiri Air Force (c/n DQ01) started a series of test flights on January 24. The aircraft was seen landing at BA125 Istres with the pilot in the backseat apparently wearing the TARGO-II helmet-mounted system, produced by Elbit Systems. Other systems to be tested include the Lockheed Martin AAQ-33 Sniper laser designator pod. Qatari pilots should fly the first Qatari Rafales sometime this year.

The first Rafale for the Indian Air Force will not fly for a while, but more information has emerged about the designation and possible home base for the two squadrons set to receive the French jet. Single seat aircraft will be designated Rafale EH and two seat variants will be designated Rafale DH. The Indian Business Standard has reported Air Force Station Sarsawa would be home to the Indian Rafale fleet. Meanwhile, the competition for potential follow-up orders from India is gearing up. On January 17, the Indian Navy published a request for information (RFI) for the procurement of 57 Multi-Role Carrier- Borne Fighters (MRCBF). According to the Indian Express, the navy has rejected the indigenous Hindustan Aeronautics Limited Tejas because it is too heavy. Manufacturers have until May to respond to the RFI. The Indian Navy specified a number of criteria, including that the manufacturer must be able to deliver the aircraft within three to six years after signing. Early speculation suggests the MRCBF competition will be slogged out between the F/A-18 Super Hornet and the Rafale; the RFI makes repeated mention that manufacturers should indicate if the country of origin operates the aircraft in its current configuration. 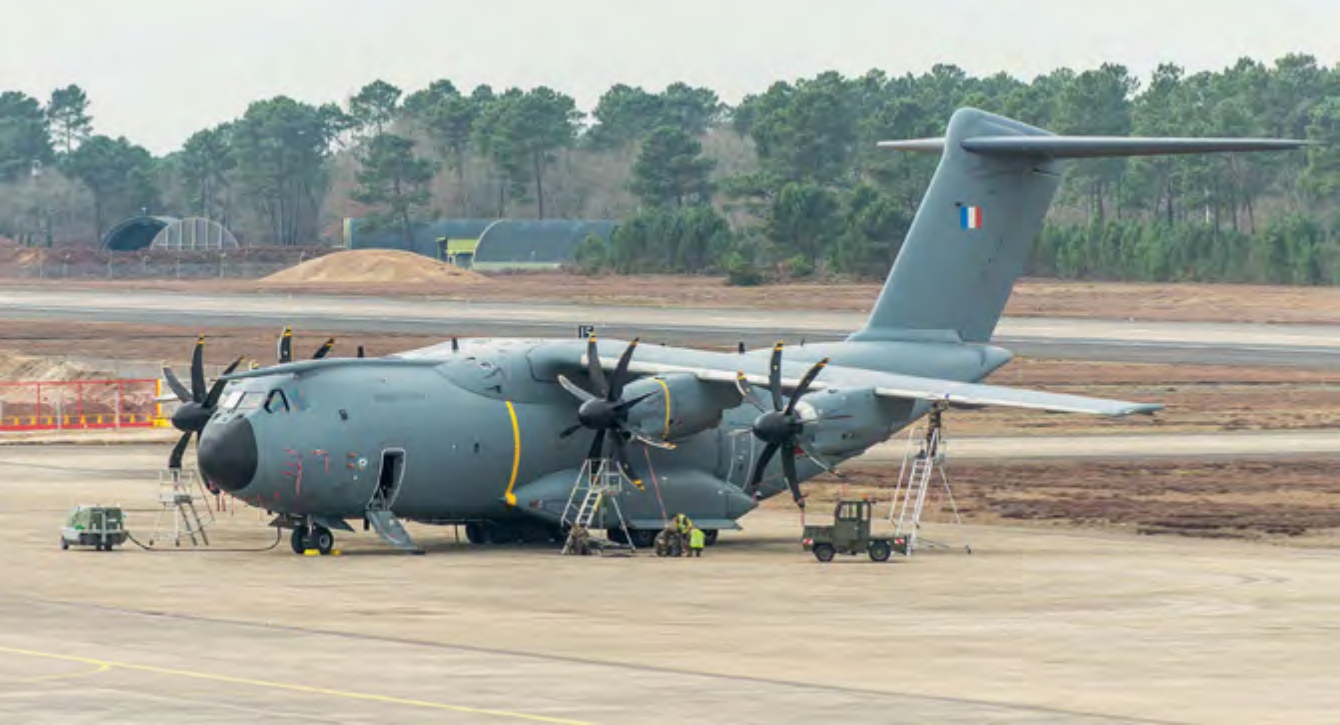 A400M 0037/F-RABJ (msn 037), the first operational A400M to participate in Exercise VOLFA undergoes inspection at Mont-de-Marsan after a triple bird strike to its left wing.