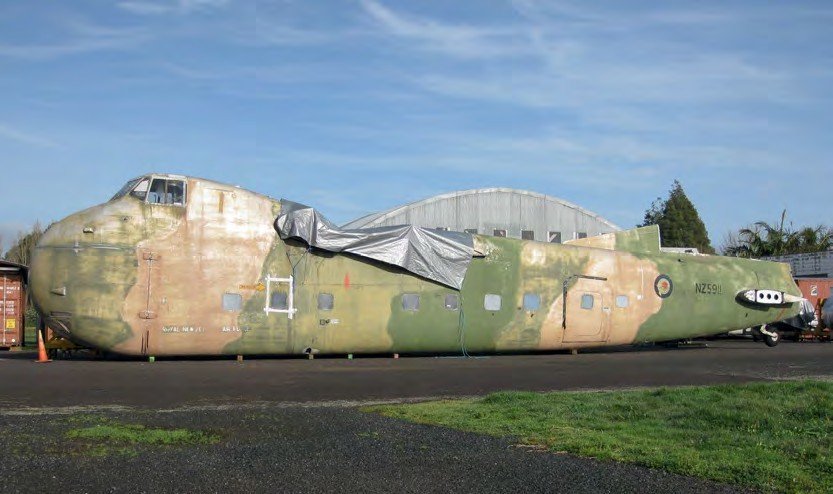 The fuselage of Bristol Freighter Mk31M NZ5911 ready to be ‘sat’ on its pallet for shipping to the UK at Ardmore, Auckland in mid-August. DAVID BRADLEY

At Ardmore airport, Auckland at the end of August, final preparations were being made for the loading of Bristol 170 Freighter Mk31M NZ5911 onto a roll-on/ roll-off ship for transportation to the UK, where it is destined to go on display at Aerospace Bristol, the new £19-million aerospace museum and learning centre due to open at Filton later this year. The fuselage is booked on a boat departing New Zealand on 20 September, and it is expected that the sea crossing to Royal Portbury Dock on the southern side of the mouth of the River Avon will take about 80 days to complete. The Freighter — which will be the only Bristol 170 on display in Europe — was acquired for Aerospace Bristol in November 2016 (see News, Aeroplane February 2017).

Soon after returning from Ardmore in late August, David Bradley, the restoration manager at Aerospace Bristol reported: “The remaining task is for Pioneer Aero to finish the platforms that the major aircraft sections will be mounted on for shipping to the UK. There will be three big platforms: one for the fuselage, one for the outer wings, and another for the centre wing section and fin. In parallel they will position and secure the engines, propellers, undercarriages and a huge collection of smaller parts in a 40ft container for transportation in a separate container ship back to the UK.

“Despite languishing in the open for nearly 40 years the airframe is in remarkably good condition. The overall camouflage paint scheme has helped considerably in this respect as Ardmore isn’t far from the western coast of New Zealand and the Pacific westerlies weather pattern.”

A expensive and labour-intensive task was the removal of asbestos in heating ducts within the fuselage. David Bradley explains: “The asbestos was removed in a lengthy process by specialist companies and a formal clearance certificate was issued in early July. Soon after that the Royal New Zealand Air Force personnel began the lengthy process to disconnect all the control cables, fuel pipes, electric cables and engine controls, all of which run through the centre wing.

“In parallel with this work, the search for all the stripped-out parts of the aircraft was in progress. This was an extremely labourintensive task and took four full weeks searching numerous 40ft containers, each packed absolutely full with hundreds of tea chests and larger wooden crates containing a vast collection of stripped-out Bristol Freighter components, and an even bigger collection of Hercules engine spares.

“Of particular concern were the instruments from the cockpit panels, which had all been removed. A formal visit to the RNZAF museum in Christchurch gave the opportunity for detailed photographs of the cockpit layout; these were printed and made up into a composite picture, which was used to find the missing instruments.

“While this was very successful there were still some parts which were not found. The fuselage of another former RNZAF Bristol Freighter, NZ5902, was traced some 50-60 miles from Auckland to near the top of the Awhitu Peninsula. This was in a very derelict state but retained some of the components that were missing from NZ5911. After locating the owner, he agreed to donate these items to us including the two ADF aerials. With Pioneer Aero’s support we spent a day there removing the agreed parts.

“Pioneer has built and installed a steel frame in the fuselage in place of the centre wing to avoid any distortion of the fuselage when tied down for its long voyage to the UK. In parallel with all these activities a major cleaning exercise has been undertaken on all the major components, and also to remove lichen from much of the upper surfaces of the fuselage, wings and so on, and the accumulated sludge inside the engine nacelles and the nacelle structures on the centre wing. All the flying control surfaces have been pressure-washed. They will all be secured inside the fuselage for shipping back to the UK.”

NZ5911 was the 11th example of the Freighter Mk31M to be built at the Filton plant for the RNZAF and was delivered in April 1954. The remaining aircraft were retired during 1977 and several were sold to Dwen Airmotive at Ardmore in August 1978. They were either sold on or dismantled, but NZ5911 was to remain in open storage there for nearly 40 years.