During an air show at BA106 Bordeaux-Mérignac on May 14, Dassault’s CEO Eric Trappier talked about the Rafale to the local Sud-Ouest newspaper. Dassault has sold the Rafale to three customers thus far (24 to Egypt, 36 to India and 24 to Qatar). Trappier explained that the fourth would probably be signed in 2018. According to Trappier, there are current negotiations with Malaysia for about 18 aircraft and negotiations with India for a second contract. He also mentioned a potential contract for 57 Rafale Ms for the Indian Navy.

A report written by a French Senate working group published on May 29 discusses the possibility of arming French drones. The paper, titled Drones d’observation et drones armés: une révolution militaire, focuses on arming French drones and affirms that it’s time to start, and discusses the possibility for equipping French Reapers with electromagnetic surveillance equipment, as well as different armaments. The report also discusses the necessity of becoming more independent with regard to the Reapers. The French currently depend on the Americans for specific maintenance operations and if the French ever want to deploy the drones elsewhere the Americans would be kept in the loop. Discussion about arming Reaper drones has been ongoing for quite a while now and the report could be a first step in bringing the discussion more to the foreground, such as the dedicated Defence committees of the French Senate.

Is the End Near?

In July 2014, when the last Armée de l’Air Mirage F1CRs were withdrawn from operational service there was talk about a possible sale of the fighter jets to another country. Although the Mirage F1CR (reconnaissance version) and F1CT (conventional air-to-ground attack version) accumulated quite a few flying hours during their Armée de l’Air career, the aircraft still have plenty of potential left to keep them flying for years to come. In 2014 the Royal Moroccan Air Force was a possible recipient of some former Escadron Reconnaissance 2/33 ‘Savoie’ Mirage F1Bs stored with the Element Air Rattaché 279 at Châteaudun. Morocco operates a sizeable fleet of Mirage F1s, but does not have any two-seat Mirage F1s for crew training, which made the possible sale of several F1Bs all the more likely. No Mirage F1Bs were sold.

In June 2016, the Argentine Minister of Defence Julio Martínez stated his ministry was studying the possible purchase of 12 former Armée de l’Air Mirage F1s. A few months later, the former French Defence Minister Jean-Yves Le Drian said a deal would be worth around €40 million. However, the cash-strapped Argentine Armed Forces had no money to procure the French Mirages and – as with previous negotiations with Spain regarding a batch of 20 former Ejército del Aire Mirage F1Ms – the deal fell through.

In early May of this year, rumours about a possible sale of the former Mirage F1s to a civilian contractor emerged. Reportedly a civilian company wants to buy up to 80 of the Mirage F1s stored at Châteaudun. Thirty or so would be in flyable condition, with the remaining aircraft serving as sources for spares. At the moment it is not clear who the contractor is, but if the rumours are true it is likely to be one of the American companies that provide aggressor services to US armed services. 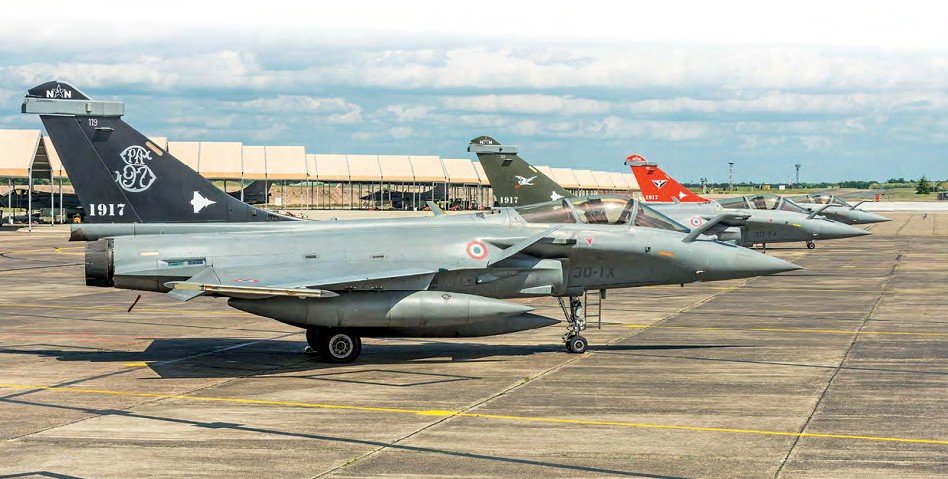 For the 100th anniversary of RC 2/30’s escadrilles the squadron painted three Rafales with special tails featuring former and current insignia for each flight. This shot shows insignia used in 1917.

Will former Armée de l’Air Mirage F1s have a second career as aggressors owned and operated by an American company?
All photos Jan Kraak

A week after the rumoured sale another news story about former Armée de l’Air aircraft emerged. According to French specialised press, the French are about to sell approximately 30 former Armée de l’Air Jaguars to India, to be used for spare parts. French Jaguars were retired from service in 2005.

On May 21, the French Ministry of Defence published an unprecedented invitation to tender for the dismantlement of 215 to 280 aircraft currently stored all over France. Between 132 and 193 aircraft would be dismantled at Châteaudun. Another 83 to 87 are slated for dismantling at other locations: 27 at BA709 Cognac, 26 to 28 at BA721 Rochefort, 6 to 7 aircraft at BA120 Cazaux, 15 aircraft at the Atelier Industriel de l’Aéronautique facilities at Cuers- Pierrefeu, and 9 or 10 aircraft at BA113 Saint Dizier. Types include Alpha Jet, Cap 232, CM170 Magister, Etendard IV, Epsilon, Flamant, Jaguar, Lynx, Mirage III, Mirage F1, Mirage 2000, MS760 Paris, Mystère, Noratlas, Nord 262, Puma, Super Etendard Modernisé, Super Frelon, Super Puma, Tucano and Xingu. According to the tender documentation, work should be carried out in 54 months after contract signature. If all the aircraft are actually sold or dismantled, there will be approximately 400 fewer withdrawn airframes across France in five years.

On May 16, the escadrilles of Régiment de Chasse 2/30 ‘Normandie-Nièmen’ celebrated their centennial at BA118 Montde- Marsan. The squadron painted three special tails, one for each escadrille: SPA 91 ‘Aigle à tête de mort’, SPA 93 ‘Canard’, and SPA 97 ‘Fanion aux Hermines’. On June 9, the Regiment itself celebrated its 75th anniversary, a prestigious squadron that holds the most aerial victories within the Armée de l’Air. Early in 1942 the Russian Government announced it would welcome French aviators who would fight alongside Russian troops on the Eastern front. A few months later, Groupe de Chasse (GC3) was activated at Rayak Air Base in Syria and a few months later, GC3 moved to the Russian training centre at Ivanovo near Moscow. Initial training was flown with Russian Air Force Yak-7Vs after which the pilots moved on to the unit’s Yak-1s. Throughout the rest of World War Two Normandie-Nièmen also flew the Yak-9 and Yak-3. Within a month of being declared operational in March 1942 the squadron got its first aerial victories when two Luftwaffe Fw190s were shot down. Normandie-Nièmen flew 5,420 missions during World War Two, 869 of which were combat missions. Aircrews obtained 273 confirmed and 36 probable aerial victories. After World War Two the squadron moved several times between Morocco, Saigon and Tunisia before returning to France. Between 1966 and 1993, Normandie- Nièmen was based at BA112 Reims after which the squadron moved to BA132 Colmar-Meyenheim with its Mirage F1CTs. The squadron was disbanded at Colmar in 2009 having flown the F1CT for 30 years.

The first Rafales and personnel for the reactivated squadron arrived at Montde- Marsan in August 2011 and RC 2/30 was declared operational on June 25, 2012. Currently Normandie-Nièmen is participating in Opération Chammal. Its crew and aircraft fly daily missions over Iraq and Syria from their base in Jordan. Besides the three special tails, the squadron also painted a Rafale in a special livery for the 75th anniversary.

Almost 400 French derelict and stored airframes could be sold or dismantled in the next few years.