Ian Harding reports on the start of a new era for UK military helicopter training, with the deliveries of the first H135s and H145 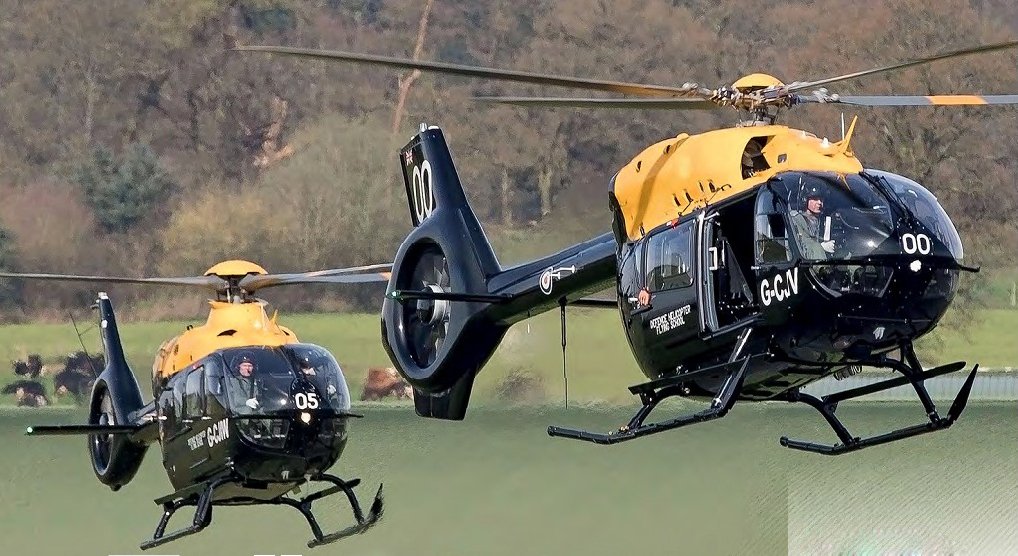 An exciting new era beckons for the rotary wing element of the UK Military Flying Training System (UK MFTS) following the delivery of the first three new Airbus Helicopters to their main fiight training centre at RAF Shawbury in Shropshire on April 3, 2017. As AIR International discovered when it met with Airbus Helicopters at its UK headquarters at Oxford Airport, Kidlington in Oxfordshire, they are on schedule to meet the programme’s challenging deadlines.

In a similar fashion to other fixed-wing components of the UK MFTS, the rotary wing element will provide helicopter training across all three components of the United Kingdom’s armed services, the Royal Air Force, Royal Navy and Army Air Corps.

Following a competitive procurement process, on May 16, 2016 Airbus Helicopters signed the contract valued at £500 million over 17 years to deliver 29 Airbus Helicopters H135 Juno HT1s and three hoist-equipped H145 Jupiter HT1s, with full associated support services into the programme. This will see 286 students trained annually by 161 instructors who will be a mixture of military and contracted personnel.

These aircraft will eventually replace the 34 single-engine H125 Squirrel HT1s (formerly AS350 Ecureuil) and 11 twinengine Bell 412EPs currently in service. This award means all the core elements of the UK MFTS are now under contract. Airbus Helicopters confirmed its contract, which runs until 2033, includes full service provision. Under the deal, Airbus Helicopters will build up capacity to be able to deliver 28,000 flying hours per year in order to meet the UK MFTS training requirement commencing April 1, 2018, an auspicious start on the centenary of the Royal Air Force.

It was clear from the outset that Airbus Helicopters would not be able to follow its normal design and build programme to meet UK MFTS’ challenging timetable. With this in mind, the company commenced early aircraft production at risk at its Donauwörth manufacturing facility in Germany. 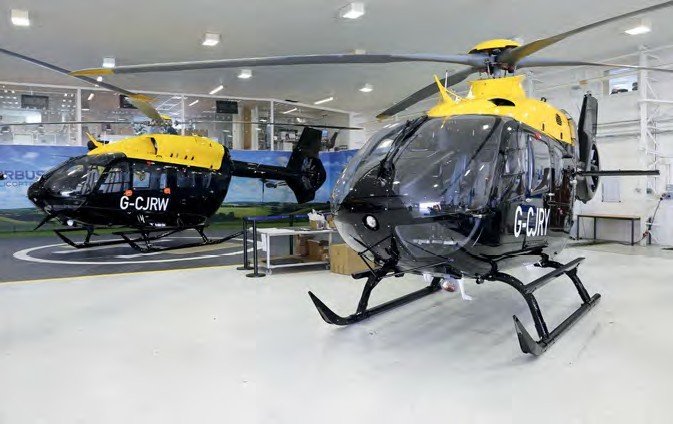 With aircraft already on the production line, Airbus Helicopters was quickly able to deliver the first aircraft to its UK facility at Oxford Airport for UK specific modifications within six months of the contract award during October 2016. The production and delivery programme is in full motion as Ian Morris, Head of UK defence business at Airbus Helicopters, noted: “The final assembly line at Donauwörth at present is almost all UK MFTS H135s from front to back. All the UK MFTS aircraft are in production with a significant proportion in various stages of final assembly. Our delivery and build profile also provides for additional aircraft above the required build up capacity. At present, we have five H135s and three H145s in the UK and we will receive two further H135s in May. We will then receive another H135 in June, two the next month and so on until the end of 2017 when only four or five aircraft are scheduled to be outstanding.” 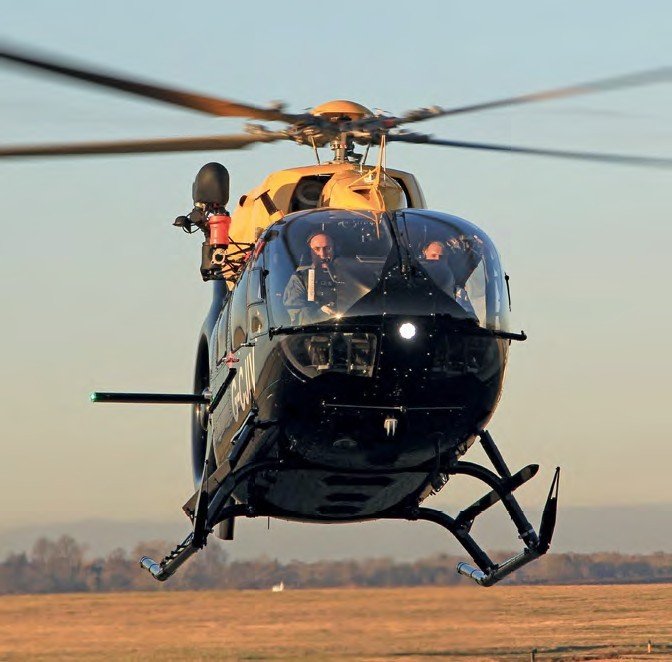 One of the three H145 Jupiter HT1s that are part of the UKMFTS contract.
Alvaro Beteta/Airbus Helicopters

The twin-engined H135 and H145 are factory fitted as standard with Safran’s Arrius 2B2Plus and Arriel 2E turbines respectively. Both aircraft are also equipped with Airbus Helicopters’ latest fully integrated glass cockpit and avionics system known as Helionix. UK MFTS is the first customer worldwide to receive this system. Both types are fully certified; the H135 completed in November 2016. 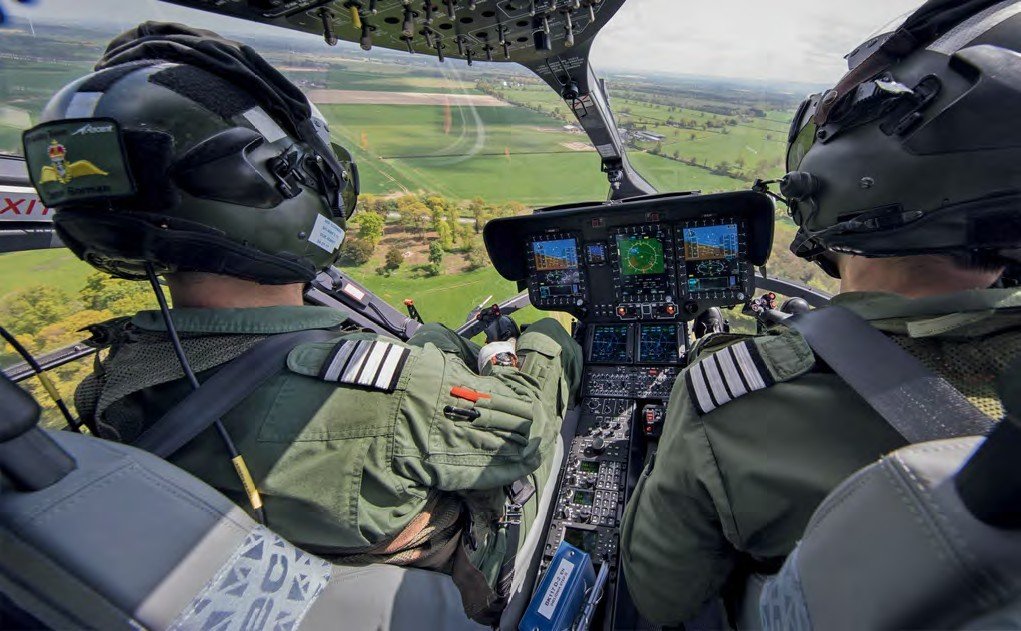 Helionix also includes a centralised maintenance function that monitors the status of all the helicopter’s sub-systems which in turn supports ground-based diagnostics. With the UK Ministry of Defence (MoD) continuing to introduce new frontline helicopters and upgrading legacy fleet helicopters with new glass cockpits and digital autopilots, the introduction of the Helionix system across both aircraft types will ease the transition for students progressing to the front line. 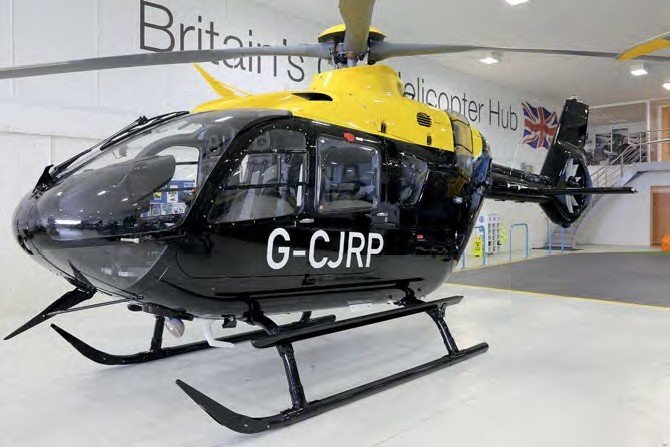 Following their production as standard aircraft at Donauwörth, the UK MFTS aircraft are delivered to the company’s UK headquarters at Oxford Airport for modification to ensure they meet the MoD’s specific operational requirements prior to handover. Modifications are modest and represent the final aircraft configuration. These include communications, sensor and access equipment which comprises an additional cabin hand hold used when the door is open, a different high-intensity strobe light at the rear of the H145 and an additional winch control which enables the instructor to override actions by the student. The communications suite has been standardised for all three services and features a twin-radio system which provides for UHF/VHF/FM and Marine band.

An L-3 Wescam MX-10 electro optical/ infrared (EO/IR) tactical surveillance system will also be fitted to ten H135 aircraft to specifically meet Army Air Corps Apache AH1 lead-in training requirements. However the H145 which will be used for maritime training will not require an EO/IR device. Airbus Helicopters confirmed that all 29 H135 aircraft delivered will receive the necessary cabling and wiring to fit an EO/ IR camera to ease fleet management. In a similar vein, all H135 aircraft have been fitted for a defensive aids suite (DAS) emulator in the form of a small tablet which gives the instructor the ability to give a visual and audible threat warning in the form of a direction and set of tones depending on how the instructor sets the system.

Airbus Helicopters commenced its workup training for the joint Ascent-MoD fielding team in November 2016. The team comprised a mix of civilian (Ascent) and military pilots and air crewman who will eventually help train the trainers (the UK MFTS Qualified Helicopter Instructors). Initial fielding team training ended in March 2017. This training now builds progressively from April 1 until September when it is scheduled to surge again in line with Ascent’s instructor ramp up programme. 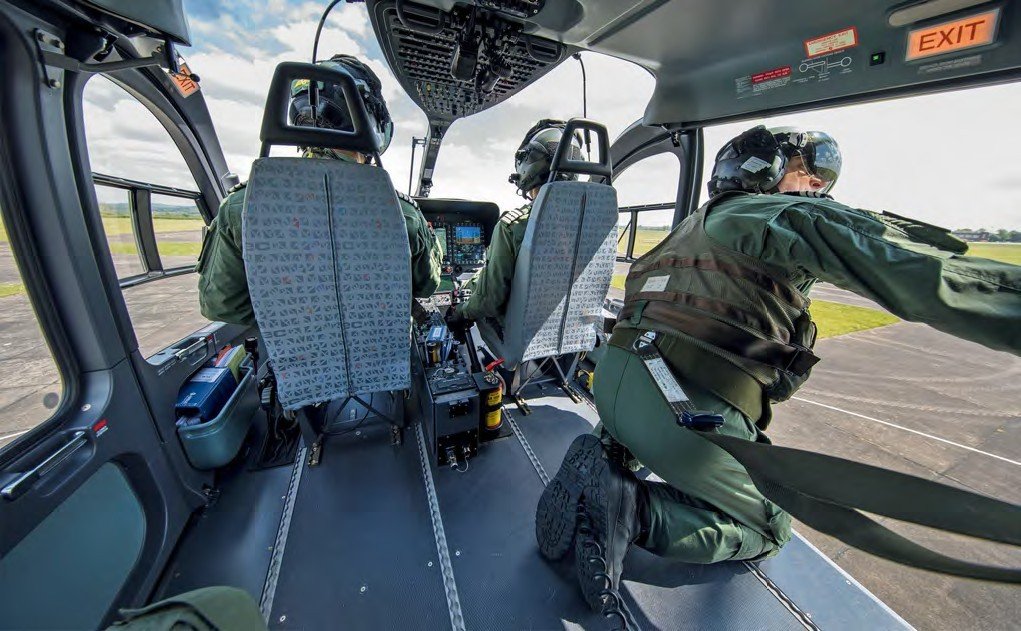 The fielding team have focused on completing the test and adjust phase which involves assessing the new training syllabus, determining what needs to be trained and fine tuning exactly how this will be trained in the new aircraft
Ian Forshaw/MoD Crown Copyright

Airbus Helicopters confirmed this initial training was made more challenging because it could only use representative aircraft from the outset as there were no H135s and H145s available in the UK. This was to prove especially challenging for initial H135 training because the aircraft had not yet received the Helionix system as mentioned earlier. As the first Helionix configured aircraft arrived at Oxford Airport, the team was quickly moved on to the new aircraft to complete differences training at the end of which the Ascent pilots received civilian type ratings as instructors on the aircraft.

Morris said: “This proved a confidence booster with the MoD confirming that everything was being completed in a professional manner. Since then, the fielding team has focused on completing its test and adjust phase which involves assessing the new training syllabus, determining what needs to be trained and fine tuning exactly how this will be trained in the new aircraft. The remainder of crew training will be done by the fielding team on a cascade basis over the coming months. Transition from the legacy DHFS [Defence Helicopter Flying School] programme to the new UK MFTS programme will be challenging as the student output must be maintained across the two programmes until DHFS ceases to operate on April 1, 2018. Airbus Helicopters will also increase our aircraft engineer and support personnel numbers, training these up as we deliver more aircraft.”

With effect from April 3, Airbus Helicopters took charge of the first of two refurbished hangars at RAF Shawbury. “We received the keys at 09:00hrs on April 3 and at 11:00hrs, we delivered the first three aircraft direct from our UK facility in Oxford,” Morris said. The three aircraft delivered comprised two H135s registered on the civilian register as G-CJIW and G-CJIT and a single H145, G–CJIV, which will be registered on the military register as ZM505, ZM506 and ZM500 respectively once both aircraft types’ release to service has been completed, during early May 2017.

Ascent’s UK MFTS solution will eventually contain seven Lockheed Martinprovided bespoke flight crew simulators (built by CAE) plus other manufacturers’ synthetic trainers (including a H145 winch trainer, night vision goggles trainer, and rear crew trainer) all located at Shawbury. Ascent will deliver 28,000 flying hours from two centres of which only 2,500 flying hours will be from RAF Valley in Angelsey (approximately 9%). The remaining 25,500 flying hours (approximately 91%) will take place from Shawbury. This ratio helps explain why only three H145s are required to primarily deliver the MOMAR (Mountain and Maritime) component of the training output. Coupled with this is the fact that UK military mountain and maritime search and rescue is no longer a military requirement following the privatisation of these roles at the start of 2013. Airbus Helicopters confirmed it will complete all H135 maintenance at Shawbury and all H145 depth maintenance at Oxford Airport. With only three H145 aircraft in the programme, it did not make commercial sense to build a new maintenance facility elsewhere.

The flying tempo at Shawbury will be extremely high, amounting to approximately 100-110 sorties per day with a requirement for fast turnaround times necessitating rotors turning refuels as required. “With a full fuel load our H135s and H145s have sufficient fuel and power to comfortably complete two one hour 15 minute training sorties without refuelling. To meet the training tempo and annual flying hours, our service and maintenance operation will effectively run for 22 hours per day, five days per week. When the flight training programme is full up and running with the first summer time departure at 08:30hrs, this will necessitate having approximately 20 aircraft prepared and on the flight line by 06:30hrs. Daytime operations will finish at 17:00hrs. Night flying will commence a few hours after this on designated days running into the early hours. Our engineers will provide a full maintenance programme as required,” Morris said.

The next 12 months promises to be an exciting period for Airbus Helicopters as it continues to meet the challenging deadlines set by the MoD for the rotary wing component of the UK MFTS. Once student training commences in earnest on April 1, 2018, the MoD should quickly see the benefit of introducing latest generation helicopters to ease student transition into frontline operations flying Apache, Chinook, Merlin, Puma and Wildcat.