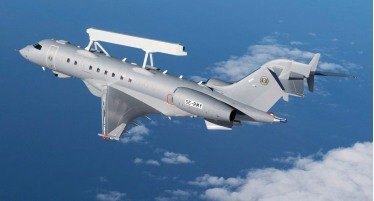 The first GlobalEye was unveiled at Linköping on February 23 and then flew on March 14, but with its temporary UAE Air Force markings removed. Saab

SAAB MADE THE maiden flight of its new GlobalEye airborne early warning and control (AEW&C) ‘swingrole surveillance’ aircraft on March 14. It followed the roll-out on February 23 at its Linköping manufacturing facility in Sweden. The United Arab Emirates Air Force (UAEAF) has ordered three GlobalEyes, which are based on the Bombardier Global 6000 airframe. A $1.27-billion order for the first two aircraft was announced at the Dubai Airshow in 2015, with a third announced at the International Defense Exhibition and Conference (IDEX) early last year.