THE UK’s second largest airport could see its annual passenger numbers grow by 28 million if its plans to utilise its second runway are approved. A scope report – which has been submitted to the planning inspectorate – details how Gatwick Airport intends to cope with the rising demand for air travel.

Revealed in the document are plans to move the centre line of the northern runway 12m (39ft) to the north to ensure the required separation of 210m (688ft) is met. Doing this would allow both strips to be used at the same time, with the main runway typically for arrivals and the northerly option for shared departures. Reconfiguration of taxiways and the two primary buildings will also be required for the project to be successful according to the report’s authors, with extensions to both the North and South Terminals carried out. Works were scheduled to begin later this year on the western extension of Pier Six of the South Terminal, while proposals include a new Pier 7 to the north.

The 256-page submission also revealed that the total land subject to the application extends to approximately 838 hectares, of which the operator, Gatwick Airport Limited (GAL), currently owns 760 hectares.

The company has previously set out three options for its longerterm growth and development. The first scenario would see the airport make operational efficiency improvements for best use of the single runway. The second scenario would see the firm construct a third runway, while the third scenario includes the utilisation of its existing northern runway for parallel operations.

Plans for a brand new runway at Gatwick were abandoned after the Crawley facility lost out to Heathrow when it applied to the UK government for approval. However, the report states that land surrounding the site would continue to be safeguarded for the construction of a runway to the south of the airport “if required in the future”. Meanwhile, GAL says that pursuing option one would “restrict future growth and Gatwick’s ability to contribute to meeting future demand for increased aviation capacity”.

Tim Norwood, Gatwick’s chief planning officer, commented: “As the biggest private investments in our region for many years, the start of the process to use our existing northern runway is a significant milestone. This project has the capacity to offer significant local economic benefits, new jobs and an exciting future for the region. As we take our plans forward, we are committed to working in partnership with our local communities, councils and partners to ensure we grow sustainably and present information in a clear and transparent way, including a more detailed stage of public consultation on the project next year.”

A wide-reaching public consultation is scheduled to be held next year, after which additional updates to the proposals will be incorporated. An application for development consent will then be made to PINS, the Planning Inspectorate, which will examine Gatwick’s application and provide a recommendation to the Secretary of State, who will then make the ultimate decision. Should planning and regulatory hurdles be passed, airport officials expect to have the ‘second’ runway fully operational by 2026 with terminal expansions taking place between 2025 and 2029. (Photo London Gatwick Airport/Farrells) 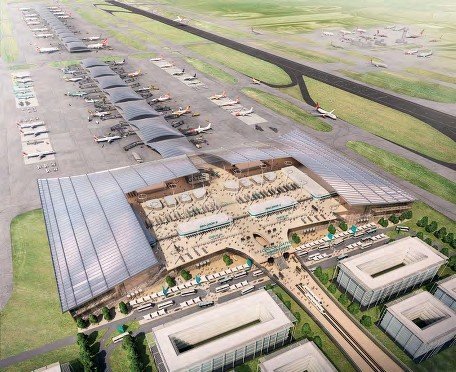