Very few airlines served New York with the Comet, but among them was Aerolíneas Argentinas which operated the type into the airport several times a week. Comet 4C, LV-AIB, was delivered new to the airline in March 1962 and is seen in the company of a Viasa Douglas DC-8 on charter from KLM and a pair of Pan American Boeing 707s parked at the company’s World Port facility. 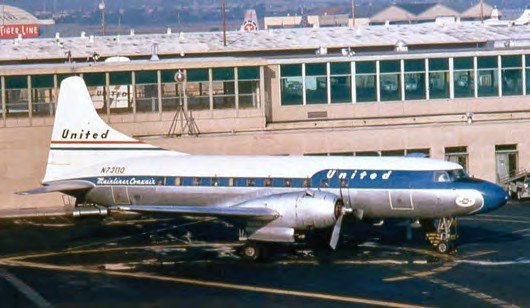 United Airlines Convair 340-31 Metropolitan, N73110, parked at the United terminal at Kennedy. The aircraft was later converted to a turboprop Convair 580 and delivered to the Panama Air Force in 1974 serialled FAP-206.